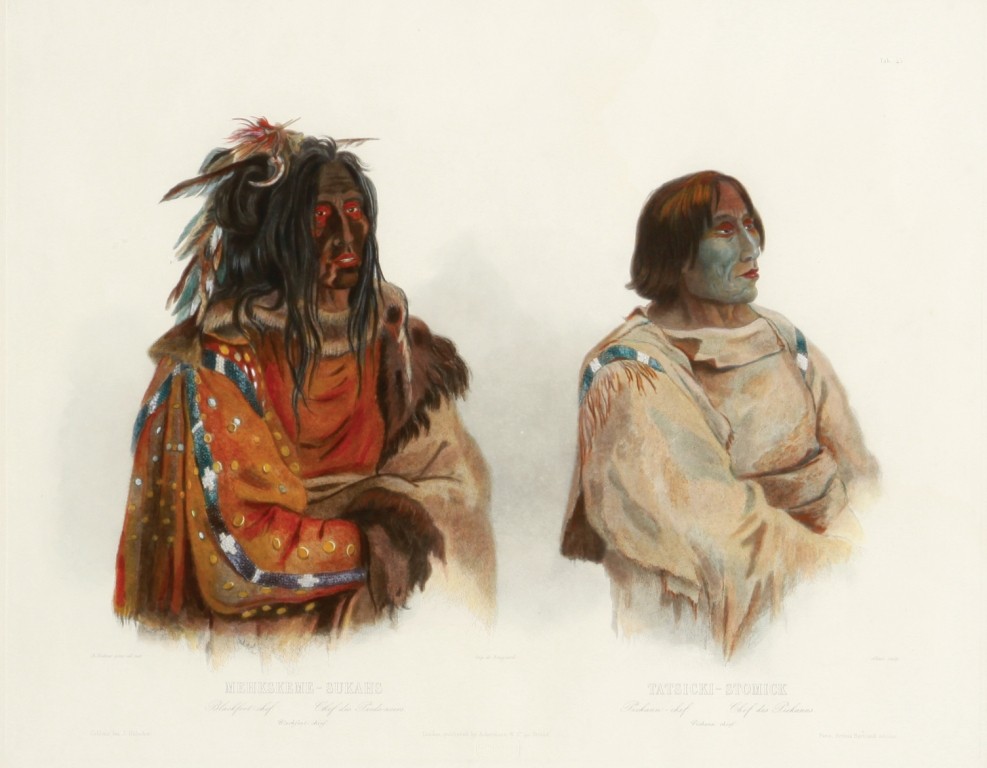 ‘Mehkskeme-Sukahs’ and ‘Tatsicki-Stomick’ by Karl Bodmer; aquatint, from his volume of portraits of early 19th century American Indian chiefs. Image courtesy of LiveAucitoneers.com archive and the C.M. Russell Museum.

ST. PAUL, Minn. (AP) – Patrick Coleman recently got an email from a rare book dealer who said he had something spectacular for sale that absolutely needed to be in the collection of the Minnesota Historical Society.The dealer wondered if Coleman could raise the purchase price of a quarter-million dollars.

“I told him I had a better chance of seducing Scarlett Johansson,” said Coleman, the society’s senior curator in charge of collecting books and other written material.

It looks like it will be a case of the rare book that got away.

But happily for anyone interested in Minnesota history and culture, there’s a lot of stuff that hasn’t escaped Coleman’s grasp and public budget, the St. Paul Pioneer Press reported.

For more than 35 years, the self-described book geek, history nut and lover of Minnesota has collected thousands of books, maps and documents for the historical society’s massive collection.

You can look at Coleman as a sort of rare book hunter for us all, because what he collects can be accessed free by anyone in the public, ranging from serious scholars to people researching their genealogy to high schoolers working on National History Day projects.

The historical society’s collection includes the rare, old and wonderful, like a 1683 first edition of Father Louis Hennepin’s account of his travels up the Mississippi River or an oversize volume of portraits made by Swiss artist Karl Bodmer of the Indian chiefs of early 19th-century America, the kind of book railroad baron J.J. Hill kept on his coffee table.

The historical society also has a seemingly ordinary 1911 school textbook containing a couple of speeches made by George Washington.

The slim volume normally wouldn’t be worth much and wouldn’t be of interest to the historical society, but Coleman paid $20,000 for it because it happened to be owned by a 15-year-old student from St. Paul named Francis Scott Fitzgerald.

The teenager, who later just went by F. Scott Fitzgerald, inscribed the inside cover with a description of himself as a “playwright, poet, novelist, essayist, philosopher, loafer, useless, disagreeable, silly, talented, weak, strong, clever, trivial, a waste.”

“He’s like any 15-year-old boy. He’s just totally full of himself,” Coleman said. “But how self-aware to know he’s going to be a novelist, to know he has weaknesses, that he can be lazy. This is really an extraordinary document for a 15-year-old and a really important piece of Minnesota history.”

Coleman, 63, jokes that he won’t retire until he acquires for the historical society his version of the Holy Grail, a rare 1925 first printing of the first American edition of Fitzgerald’s The Great Gatsby with an intact dust jacket.
The dust jacket was printed slightly larger than the book, so it tended to get tattered and thrown away. But the iconic image on the jacket – the eyes of a woman overlooking a garish amusement park – influenced Fitzgerald, who saw the artwork while he was still writing the book.

The rarity and story behind it have meant that editions with the intact dust jacket have inched toward $200,000 at auctions.

It’s “the most expensive single piece of paper in 20th-century book collecting,” according to one expert.

“It’s a very important part of our cultural heritage, and there isn’t a copy of this in the state of Minnesota,” Coleman said. “We really need that.”

It doesn’t have to have a high-brow literature pedigree to be considered part of Minnesota history and culture, according to Coleman.

He’ll get a used copy of an old pulp magazine called Astounding Stories‘ for example, because it contains a short story called Hellhounds of the Cosmos by Clifford Simak, a Twin Cities newspaperman who moonlighted as a science fiction writer.

“We want everything that has something to do with Minnesota,” Coleman said.

That can include vintage telephone books and high school yearbooks.

“You’d think we’d have Bob Dylan’s yearbook, and we don’t. I would love to have that,” Coleman said.

There’s a 1932 catalog from the St. Paul Artificial Limb House and a 1950s flier from a Washington Avenue nightclub in Minneapolis advertising the “Boys Will Be Girls” floor show and Jean Evol, “The Male Fanny Brice.”

“Anything printed is my area of responsibility,” Coleman said.
___

So he’s the curator of the 50,000 maps held by the historical society, ranging from a 1581 map of the interior of the United States to mid-20th-century Minnesota tourist maps featuring cartoons of Paul Bunyan and girls in swimsuits by the lake.

A map owned by the historical society was made by Lewis and Clark and is “one of the most important maps in American cartography,” according to Coleman.

But Coleman also likes a recent donation from the family of Jerome Andrusko: a 4-feet-long sheet of brown butcher paper, hand-drawn in pencil and China marker by Andrusko of the streets, houses, businesses and families once located in the Bohemian Flats, a bygone residential neighborhood along the Minneapolis riverfront.

The Minnesota Historical Society’s library has about a half-million books. With so much stuff that’s rare and unusual, about 30 percent of the material is unique to the collection, meaning it can be found nowhere else.

In a typical academic library, unique materials might amount to only about 5 percent of the collection, Coleman said.

Particularly strong or important parts of the historical society collection include materials related to travel and exploration, the abolition movement, the Civil War and the world’s best collection of materials printed in the Dakota language.

One one-of-kind item acquired by Coleman is known as the Treaty of Washington, 1858, an original, handwritten document in which the Yankton Sioux relinquished more than 11 million acres of their land in exchange for a 400,000-acre reservation.

Coleman said he finds a particular poignancy in the artifact, marked with X’s, denoting the signatures of chiefs and delegates with names like “A-ha-ka-ho-che-cha,” or “The Elk with a bad voice.”

“They gave up their way of life by signing this treaty,” Coleman said. “It was a life-changer for them.”

Coleman said the treaty was acquired in 2004 after he got a midnight call from a St. Paul book dealer who said that the document was available for $35,000.

Coleman said he pulled on a pair of jeans over his pajamas and rushed over to grab it. The dealer gave the historical society 30 days to pay the bill.

The historical society has funds set aside for normal library acquisitions. For example, it spends about $40,000 a year on recently published books, Coleman said.

But for an expensive, “one-in-a-lifetime” purchase like the treaty, Coleman depends on donations from organizations or individuals who want to help preserve the state’s history.