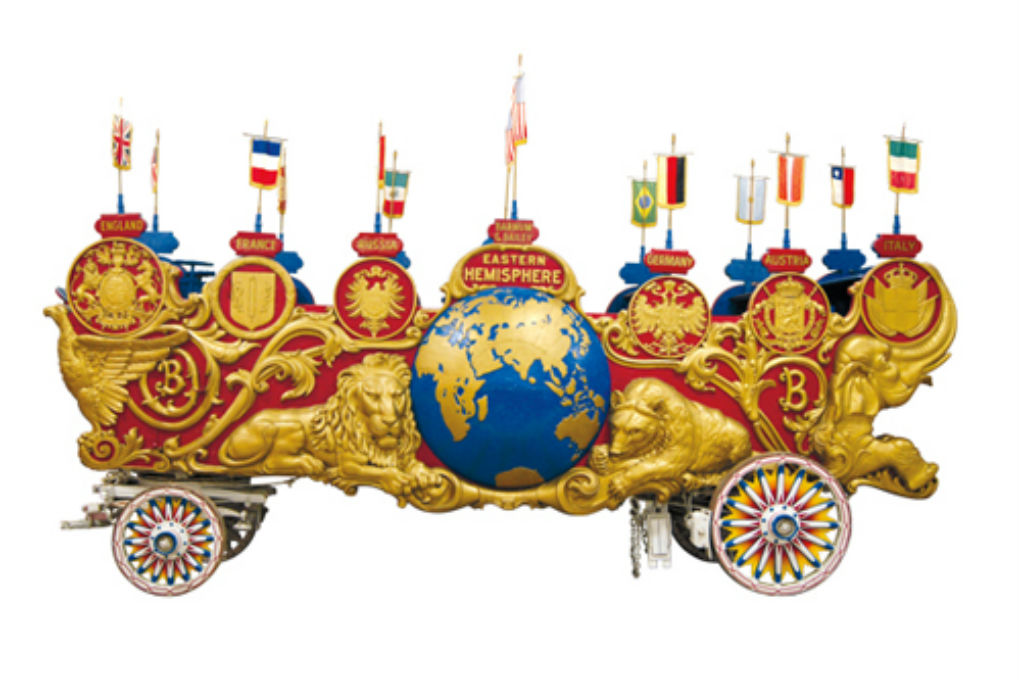 PERU, Ind. (AP) – A small crowd patiently waited in the drizzling rain Wednesday morning at the grounds of the International Circus Hall of Fame, located a few miles east of Peru.

The occasion? The group had gathered to see the world’s largest circus wagon delivered to what was once the winter quarters for some of the most popular circuses in the world.

The crowd wasn’t disappointed. At around 9 a.m., a semi pulled onto the grounds hauling the 13,000-pound wagon. A few hours later, it was parked inside one of the two large barns located on the property, which house a number of other historic circus wagons, along with hundreds of other pieces of circus history.

Nearly everyone snapped photos or took video as a local farmer pulled the 114-year-old wagon with a small tractor, moving it from the semi-trailer and backing into the barn.

Peter Gorman stood nearby and watched the scene. He wanted to make sure the delivery went off without a hitch. After all, he had just paid $250,000 in May to purchase the wagon at Heritage Auctions in Dallas, Texas.

Gorman lives in Vancouver, Canada, where he owns a decorative art company that has worked on high-end interior design projects across the world.

He also has served on the board of the International Circus Hall of Fame for more than 20 years, and he’s a collector of items from America’s circus past.

Now, Gorman owns what most experts deem to be the gem of any circus artifact in existence: The world’s largest circus wagon.
“It’s prominence as an artifact cannot be underestimated,” he said.

The 28-foot long, 14-foot high wooden wagon is elaborately carved with lions, bears, elephants and eagles. The most prominent feature, though, are the two half globes that protrude from the sides that are painted like the Earth’s eastern and western hemispheres. Those carvings are what earned the wagon its nickname, “Two Hemispheres.”

The top of the wagon has national seals from countries like Belgium, England, Russia and France.

Gorman said it was in 1902 when James Bailey commissioned the construction of the wagon. It was to be the crowning jewel of his fleet of parade carriages used in the Barnum and Bailey Circus.

It took dozens of horses to pull the wagon, and it led the 1903 procession that heralded the circus’ return to America after a five-year tour in Europe.

One hundred and fourteen years later, it’s in nearly mint condition, and has nearly all its original parts.

Now, the wagon is sitting in a barn in Peru that in the 1920s housed the horses, elephants, lions, camels and other animals from the Hagenbeck-Wallace Circus, as well as circuses such as Sells-Floto, Howes Great London Shows and the John Robinson Famous Shows. The site was declared a National Historic Landmark in 1987.

It all begs the question: Why buy what’s arguably the rarest circus wagon in the world and ship it to Peru?

“Why did I do this? I just had to do it. I really did,” Gorman said. “Someone who loves the circus had to get this artifact.

I’m not a particularly wealthy man, but I’m fortunate that I’m at a point in time where I had the resources to direct it here without bankrupting myself or affecting my business. This is a legacy project for me.”

The wagon was used in circus parades for nearly 40 years before it was put out of commission. After that, it traveled to museums throughout the country, including the Circus Hall of Fame in Sarasota, Florida, and the Circus World Museum in Baraboo, Wisconsin.

Before Gorman bought it, the wagon was owned by John Zwiefel, who had an extensive collection of circus paraphernalia and owned the circus museum in Sarasota. When that closed in 1980, Zwiefel moved the wagon to a few different locations until it ended up sitting in a garage in Orlando, Florida.

That’s where it stayed until Monday morning, when truck driver Robert Hopper drove from Wisconsin to load it up on a trailer. Hopper drives for Deppe Transit, which for four generations has specialized in hauling circus wagons.

In fact, Hopper has delivered circus wagons to Central Park in New York City to participate in the Macy Day Parade.

But he said driving the “Two Hemisphere” wagon from Florida to Peru was one of the most unique deliveries he’s ever made.

“It’s an honor that they call you up and say, ‘Go and get it,’” Hopper said. “It’s the highlight of my career.”

Gorman said now that the wagon is in Peru, he hopes it will inspire the community to take more interest in the winter-quarter grounds, which he said is a national treasure that locals should appreciate.

“I bought this here so the people of Peru will embrace these winter quarters,” he said. “It’s important to me, because this facility cannot exist as a stand-alone entity without community support. The county and citizens need to come together to preserve this place.”

The arrival of the wagon comes just weeks before Peru holds its annual Circus City Festival, which includes a parade and a week of circus performances put on by Miami County students.

Ultimately, Gorman said, he wants to see the wagon housed at the Circus World Museum in Baraboo. He said he hopes he can use the wagon as a kind of bartering chip to get the museum there to give Peru some of its Indiana-made wagons.

Whether that happens or not is a question mark. But for now, Gorman said, he’s happy just to own the one-of-a-kind wagon and see it housed at a place that has such a rich circus history.

“As I kid, the circus was the greatest show on Earth to me,” he said. “I guess in my dreams, I ran away to the circus, so this is all still slightly surreal to me to think that I actually own this wagon.”
___