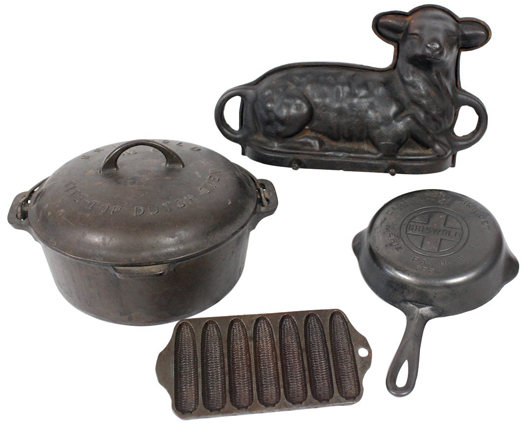 SPRINGFIELD, Ore. (AP) – Among the chaos of smells, goods, vendors and customers at the Picc-A-Dilly Flea Mart at the Lane Events Center on Sunday morning, there stood unassuming Chuck Wafford, 90, near his table by the entrance.

The table was set neatly with more than a dozen cast-iron pans and molds. Some were worth $20, and a few were worth more than $2,000. The best ones, in Wafford’s opinion, are Griswold cast iron.

“Griswold is the Cadillac of iron,” Wafford, of Springfield, said matter-of-factly. “My motto is they’re like rusty gold.”

Cast-iron pans and pots are a favorite for professional and amateur cooks. Unlike many modern kitchen appliances and tools, a cast-iron pan or pot will last indefinitely if taken care of properly.

Though cast iron pans are still manufactured, the older ones from companies such as Griswold and Wagner are considered the best and make valuable collectibles as well as useful cookware.

“It should be against the law to cook potatoes or chicken in anything but a cast iron,” joked Wafford, whose nickname is “Cast Iron Charlie.”

Wafford, co-author of a cast-iron reference guide called The Book of Griswold and Wagner, collects and sells cast iron to the public and has traveled the country to build his collection and knowledge. He’s at the Picc-A-Dilly market most every Sunday it’s open.

He said he began collecting cast iron in 1979 after his mother left him an incomplete set of pans.

“I needed a block smoke ring skillet,” Wafford said. “I couldn’t find it.”

He crisscrossed the country looking for that skillet, and developed a passion for cast iron along the way. He traveled to Erie, Pennsylvania, the home of Griswold Manufacturing before it went bust in 1957. He visited Scott’s Antique Market, a major antique show, in Atlanta.

Years later, he finally found that smoke ring skillet he’d set out for – on the Oregon Coast, of all places.

He said that just goes to show how rare items are often out of plain sight. One reason Wafford sells his wares at the Picc-A-Dilly is because once in a while he’ll find a good pan there among the many doodads and knickknacks.

Walterville resident Al Kephart, 60, was at Sunday’s flea market. He said he got his first piece of cast iron from Wafford about a year ago.

“He kept me coming back,” Kephart said. “Cast iron lasts forever and it’s easy to take care of and clean. We usually use it for breakfast. Bacon, potatoes, omelets.”

Kephart’s growing collection is almost all Griswold. He said he likes the variety of pans and their sheer durability and simplicity.

“They’re just as good now as a hundred years ago,” Kephart said. “With all the nonstick pans, I don’t know what I’m eating with my food, but you know exactly what you’re getting with iron.”

Kephart said he and his family have purchased several cast-iron pans as gifts for friend – one as a wedding present – and they’ll soon experiment with a Dutch oven.

“A lot of families pass their cast iron down. It’s one of those things that’s very collectible and usable,” said Kephart, who now goes “junking” at shops and markets for old cast iron. He’ll find old, dirty pans and molds that can be bought “for virtually nothing” and then restored with some work.

Proper care for cast irons is one of the most important parts of owning one. They must be kept dry after use (to avoid rust) and cleaned carefully (Wafford said soap and water are fine, but not a lot of scrubbing).

Most important, they must be seasoned.

That doesn’t mean sprinkling some salt or cinnamon on the pan – rather, it’s using oil to create a flavorful and nonstick coating on the metal.

Most users wipe pans down in oil and then bake the cookware in the oven to help the seasoning set on the metal. That’s not quite good enough for Wafford, who said he submerges cast iron in a deep fryer full of boiling peanut or olive oil for an hour.

“Of course, it’s dangerous,” he said, adding that if people want a professional cleaning or seasoning of a pan, they should seek out an expert.

“Once you have one piece of cast iron, you can’t stop. I can prove it,” he said. “My motto is too much is not enough when you collect cast iron.”

Information from: The Register-Guard, http://www.registerguard.com

Pan Am to Bermuda was hot ticket at Dreweatts & Bloomsbury sale