Marsden Brothers of Sheffield, England, made skates similar to these for Queen Victoria and Prince Albert in 1840. Image courtesy of Karen Cameron, Antique Ice Skate Club.

MERIDEN, Conn. (AP) – Karen Cameron ice-skated as a child growing up in Wisconsin, but the sport never had a big effect on her until years later.

Cameron, a Meriden resident for the past 30 years, sculpted Victorian dolls in the early 1990s with oven-baked clay. She researched the elaborate costumes and fell in love with the ice skates that were worn during the 19th century, especially the skates with curled blades.

“I just wanted one pair of skates, just one pair with the curls,” Cameron said.

She bought her first pair of antique ice skates in 1995. Today, Cameron owns between 250 and 300 skates. Some of the skates were bought on eBay, but the majority of Cameron’s skates were bought at antique shows or auctions all over New England.

To share her love of antique skates with others, Cameron co-founded the Antique Ice Skate Club in 2000 with Ann Bates, a resident of Land O’ Lakes, Wis., and avid antique ice skate collector.

Cameron found Bates through an advertisement in an antiques magazine in which Bates was looking for others who had an interest in antique skates. The club, which has about 70 members, has had three gatherings in the last 10 years.

Two of the gatherings were in Lake Placid, N.Y.; the other was at Bates’ Wisconsin home.

Bates has been collecting antique skates for more than 35 years. She has about 280 pairs and has written several articles on the skates.

Bates said the recent development of the club’s Web site, antiqueiceskateclub.com, will make her job a lot easier since members can get information and pay dues through the site.

Before the club went online, Cameron wrote and compiled an eight-page newsletter that was mailed out to all of the members every three to four months. Cameron said the Internet makes it easier to get the newsletter out to the club’s members.

“I’m hoping the Web site will bring us all closer together,” Cameron said. “It’s an elite group of us. Not many of us are out there.”

Lyndell Betzner of Hamden is one of the elite. Betzner has been collecting skates for the past 30 years. She and her husband, a hockey fan, started attending antique shows and looking for old skates. Betzner has amassed about 100 pairs. She said she is amazed by Cameron’s vast collection.

Both Bates and Cameron are impressed with a pair of skates Betzner found in Massachusetts 20 years ago. The skates are made out of ebony and have brass blades. Betzner said there is a heart made out of mother of pearl near the ball of the foot. The skates are inscribed with the name Julia.

“Someone had the talent to make them. They’re beautiful, and they feel so lovingly made,” Betzner said.

“It just boggles the mind,” Cameron said, “how many different ice skates are out there.” 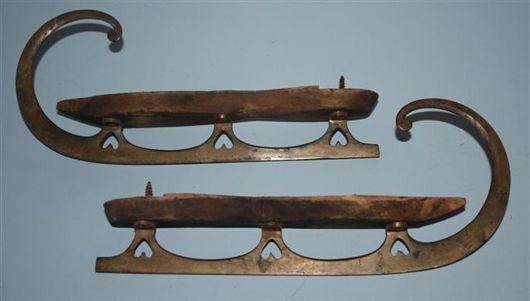 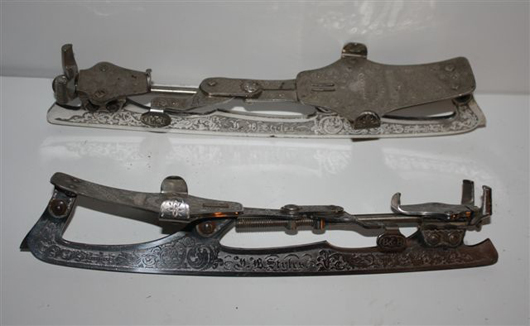 Barney & Berry of Springfield, Mass., manufactured these silver-plated ice skates in the 1870s for J.B. Styles, which is marked on the blades. Image courtesy of Karen Cameron, Antique Ice Skate Club. 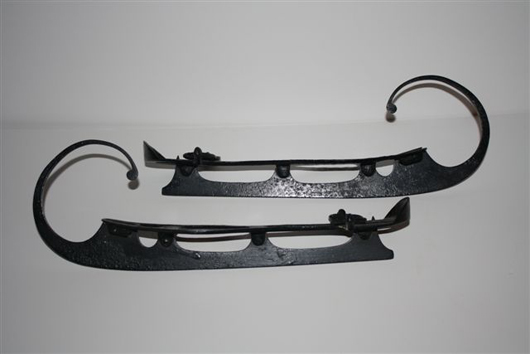 Barclay & Bontgen of Newark, N.J., made one of the first all-metal ice skates in the mid-1800s. Image courtesy of Karen Cameron, Antique Ice Skate Club. 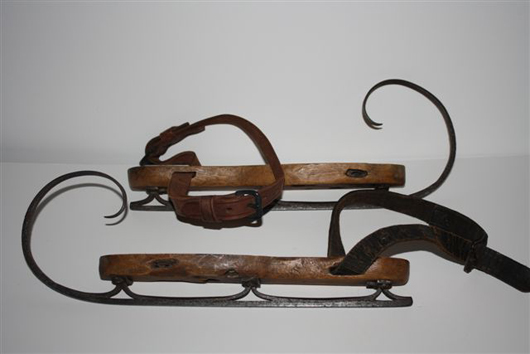 These unmarked skates from the mid-1800s have a wooden footplate. Image courtesy of Karen Cameron, Antique Ice Skate Club.

The engraved blades on these skates are enhanced with a blued finish. They were made in Germany by Blechman in the mid-1800s. Image courtesy of Karen Cameron, Antique Ice Skate Club.