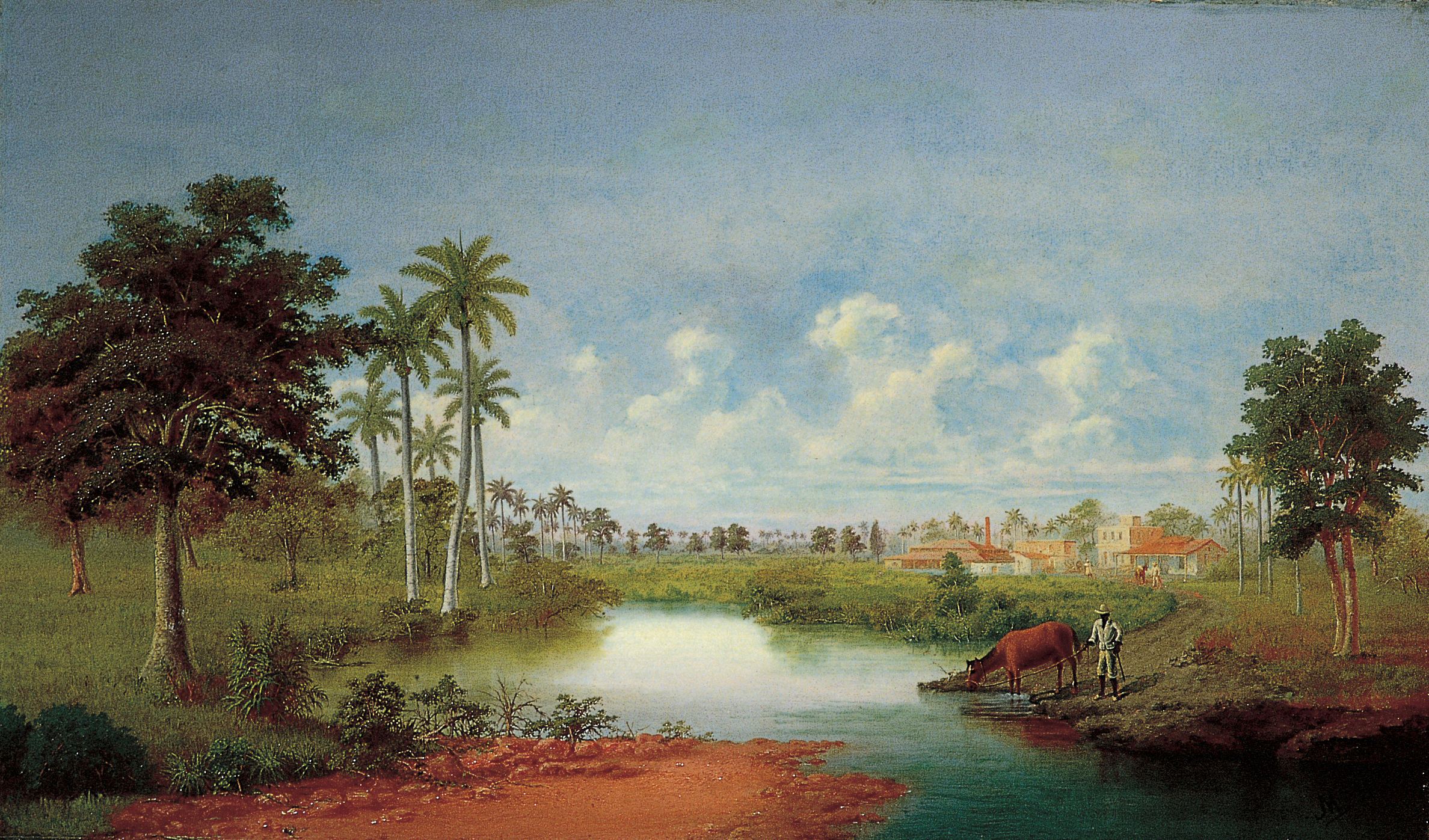 DAYTONA BEACH, Fla. (AP) – The Cuban art collection at the Museum of Arts & Sciences attracts busloads of Cuban-Americans from South Florida to see an exhibit that chronicles 300 years of Cuban history and culture.

For Cubans exiled from their homeland, the art stirs up raw emotions.

“It’s the only part of the museum where I see people break down and cry,” said Juan Junco, a volunteer tour guide at the museum who left Cuba when Fidel Castro came to power.

The art collection is a legacy of former Cuban dictator Fulgencio Batista, who lived in Daytona Beach off and on during the 1940s and 1950s. It also represents a forgotten footnote in the ongoing feud between Cuba and the United States.

Batista gave the art to the city of Daytona Beach in 1957, less than two years before he was overthrown. Castro’s government has asked for some pieces of the collection back, but the city rejected the requests in 1962 “until there is a more friendly government in Cuba,” according to The News-Journal archives.

With the U.S. on a path to restoring diplomatic relations with Cuba, Batista biographer Frank Argote-Freyre says the time may be right to finally resolve the question of who owns the art.

“The Cuban government has claimed that some of the pieces were stolen from the national gallery,” said Argote-Freyre, a history professor at Kean University in New Jersey. “In this new movement for better relations between Cuba and the United States, this is something that could be explored much more openly. If the Cuban government has documentation to prove (ownership) that should be pretty easy to establish.”

The city of Daytona Beach transferred ownership of the art to the Museum of Arts & Sciences in 1971, said Susan Cerbone, public information officer for the city.

In the years since, the museum has never been contacted by the Cuban government, museum officials said. Calls to the Cuban Interests Section in Washington, D.C., were not returned.

The exhibit is “one of the most important collections” of Cuban art outside of Cuba, according to the Museum of Arts & Sciences’ website.

“In 1957, approximately one year before the fall of his presidency, Cuban President Fulgencio Batista, a regular vacationer and resident of Daytona Beach in the 1940s and ’50s, gave much of his extensive collection of Cuban art ‘to the city and people of Daytona Beach,’” the museum’s website says.

Over the years, the collection has grown through other donations. Jenelle Codianne, director of marketing and public relations for the Museum of Arts & Sciences, would not comment about what might happen if the Cuban government asked again for some of the art to be returned.

“The museum has no position on a hypothetical situation,” she said.

The art is a reminder of the city’s relationship with a dictator who was so feared and loathed in his homeland that he inspired a revolution. But in Daytona Beach, Batista was treated like a favorite son, according to local residents who remember his time here.

Batista loved Daytona Beach for the fishing, but he had political reasons for coming here, too.

A self-made man who rose to power through the military, Batista was first elected the president of Cuba in 1940. He came to Daytona Beach and bought a house on North Halifax Avenue in the mid-1940s when term limits prevented him from seeking a second term and his successor in office would not guarantee his security.

Batista chose Daytona Beach because he wanted “to have contact with Cuba, but he doesn’t want to be in Miami because there’s more of a security risk,” said Batista expert, Argote-Freyre. “He wants to be far enough so it’s not easy to get to him but close enough so he can maintain regular contacts with his followers.”

Batista returned to power in Cuba through a military coup in 1952, canceling an election in which he was far behind in the polls and one in which Fidel Castro also was running for a seat in the Cuban Congress.

While president, Batista vacationed in Daytona with his wife and children. The city celebrated him with a parade and declared it Bastista Day on March 24, 1956. Batista rode in an open-air convertible with Mayor Frank Morrison, waved to crowds lining the street and later spoke at a reception with a U.S. senator, according to news reports from the time.

In the same parade, a group of students from the University of Havana held up a banner that said, “Batista – Dictator,” that was later confiscated by a Volusia County Sheriff’s deputy, according to the news reports.

Alberto Jones, a Cuban-American in Palm Coast who is from the same Cuban province as Batista, said he is not proud of Batista because of the torture associated with his second regime.

“No one wanted him to come back, but he forced himself back into the country,” Jones said of Batista’s military coup. “He overthrew the government; put a lot of thugs in (power). Literally, the brutality turned everyone against him.”

But Daytona Beach officials may not have known about Batista’s ruthless tactics to retain power, the Batista expert said.

“Money and power make people more accepting and Batista had both,” Argote-Freyre said. “The corruption and violence of his government was far away. Batista’s embrace of Daytona Beach made locals feel special about their community. He could have lived anywhere.”

Batista was a man of mixed race who was born into poverty, the son of a sugar cane cutter. Argote-Freyre thinks it’s odd that he was welcomed in Daytona Beach, a segregated city of the South at the time.

“If he had been born in Daytona Beach, he would have been riding in the back of the bus,” Argote-Freyre said.

The year after the parade, Batista hosted 16 Daytona Beach officials for a trip to Havana, including Mayor J. H. Long. During the visit, Batista gave his two properties at 137 and 145 N. Halifax Ave. to the city, and formalized the creation of a Cuban Foundation Museum.

The Cuban Museum merged with the Museum of Arts & Sciences in the 1960s. And Batista’s former homes were later torn down and replaced with St. Demetrios Greek Orthodox Church. = Dick Every, a lifeguard in the 1940s, recalled Batista as a friendly visitor who was such a regular on the Boardwalk that he befriended the beach vendors.

A rubber float vendor, who called Batista “the Chief,” once asked him to take care of his stand.

Every recalled another time in the 1940s when he was driving the Loop with his girlfriend on a Sunday afternoon and saw Batista pushing his bicycle “with the chain wrapped around the handle bars.”

Every offered him a ride home and the former Cuban president climbed into Every’s 1937 Chevrolet on John Anderson Drive in Ormond Beach.

Bert Reames, a retired insurance salesman, said he worked at Sears Roebuck in the 1950s when “Senora Gamero, a personal representative (for Batista), came into the store.”

“I would be assigned to assist her with whatever she was looking for,” Reames said. “I recall her buying some dozen or so refrigerators at one time. She was not at all pleasant to wait on.”

When it became clear that Batista would be overthrown by Castro, he sneaked out of Cuba on Jan. 1, 1959. Historians’ best estimate is that he left with $100 million on a plane bound for the Dominican Republic, Argote-Freyre said.

At the time, the Eisenhower administration would not let him back into this country. Batista’s wife and son, Roberto, were living in the former Ransom Olds mansion at 129 N. Halifax Ave.

Marta Fernandez Batista pleaded with First Lady Mamie Eisenhower by telegram to let her husband enter the United States – but to no avail. Batista would never set foot in America again and died in Spain in 1973.

The collection of art that he gave Daytona Beach traces hundreds of years of Cuban history. But Junco, the tour guide at the Museum of Arts & Sciences and a retired accountant who lives in Port Orange, likes to imagine a different Cuban history. He wonders what might have happened if Batista had permanently adopted Daytona Beach as his home. Then Batista would have never canceled the election of 1952, and Castro may never have come to power in a revolution that caused him and so many others to flee their homeland.