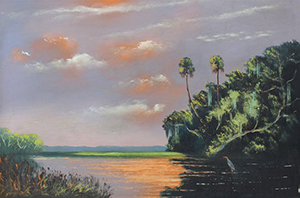 TAMPA, Fla. (AP) – Behind the rusting chain-link fence topped with razor wire and inside abandoned buildings where muted rooms are blanketed with dust lies artistic treasure.

Two years ago, the Hillsborough Correctional Institution fell victim to not enough money and too few inmates. Now the gates are locked to keep people out, not to keep them in, and the state this year sold the 135 acres and 134,700 square feet of building space to a Tampa developer for $3.5 million.

What will happen to be buildings remains unclear. If they are bulldozed to make way for new development, more than just concrete and steel will be lost. There is, it turns out, some significant artwork behind those bolted doors.

Six idyllic, Sunshine State-themed murals, the work of Florida Highwaymen artist Al “Blood” Black, are on the walls of the defunct prison in Riverview.

Black served time in the late 1990s and early 2000s and, at the behest of a warden who recognized his artistic talent, traveled from prison to prison splashing vibrant sunsets and sunrises onto the concrete blocks of the otherwise dreary penitentiary walls.

One stop was the lockup in Hillsborough County.

“It was a female prison,” he said in a phone interview from his Fort Pierce home. “The warden there asked that I come there to paint.” He had been incarcerated in a prison near Orlando.

“I went over there two or three times,” he said. “The warden wanted me to paint one in front of his office there.”

The murals are a stunning contrast to the drab walls inside the prison. In typical Highwaymen fashion, he painted two a day.

“Yeah, it’s more time-consuming and you use up more brushes,” he said. “But, oh, yeah, I can paint anything.”

He hopes his murals don’t meet up with the wrecking ball. Ideally, he said, they might one day be displayed someplace where everyone can enjoy them.

“I would like for them to be preserved,” he said. “If they got to tear the buildings down, at least cut them out and save them.”

Black is a member of a unique group of artists.

The Florida Highwaymen are 26 black artists, 18 of whom are still alive, who made names for themselves by speed-painting landscapes in the 1960s and 1970s and selling their artwork along the roads of the eastern part of the state. They marketed their work this way because, during those more-segregated times, no galleries would show them.

Now the paintings are sought after, some fetching prices of between $3,000 and $4,800 each from an online art dealer who sells Florida Highwaymen works.

Black was sentenced to 12 years in prison in 1997 for fraud. His first stop was Central Florida Reception Center, a prison near Orlando. Ron McAndrew was the warden; he now lives in Dunnellon.

“When I met him, he was not your average prisoner,” McAndrew said. “He weighed 115 pounds and expected to die any minute.”

Black was nursed back to health, he said.

“Al went from skin and bones to 225 pounds of solid muscle pressing almost 300 pounds,” he said. “Still, he just had the most gentle, caring personality of any inmate I’ve ever met.”

He called Black to his office, and the prisoner admitted what McAndrew had suspected: He was an artist, one of the Highwaymen.

That wouldn’t be a problem, McAndrew told him.

Out of their own pockets, the prison staff contributed to buy canvases, paints and brushes, said McAndrew, now a legal consultant. Art lovers from the outside began kicking in thousands of dollars worth of art supplies.

“He turned out five or six overnight,” McAndrew, 76, said. “We were hanging them in all the offices.”

Then, McAndrew said, “I just turned him loose. I let him paint murals any place we had a wall. You could tell the difference in the way inmates behaved. They all were so proud of him. They had somebody like them who was intelligent and incredibly talented.”

“We had no more room in the dining hall so he painted in medical, in the dorms and in the administration building,” the former warden said. “He just painted all over the place, and we couldn’t stop him.’”

The prisoner/warden relationship evolved into a friendship.

McAndrew was in Fort Pierce consulting a few years ago and called Black. The two had kept in touch.

“I met him at his house, and we had lunch,” McAndrew said. “We talked for the whole afternoon. I had a great time talking with him as a friend, as opposed to us being in prison.”

As an inmate, Black painted murals in three other penitentiaries, including Hillsborough Correctional. He painted well over 100 works of art in prisons, said Gary Monroe, professor of visual arts at Daytona State College and author of The Highwaymen Murals: Al Black’s Concrete Dreams.

“He painted 90 at the Central Florida Reception Center,” Monroe said. “They were so interesting and he was so successful that the powers that be asked him to paint murals at Zephyrhills Correctional. He painted 35 there and a handful at Tomoka Correctional near Daytona Beach.”

“They realized the virtue of how these paintings affected the mood and sensibilities of the inmates and the staff and thought it was a good idea,” Monroe said. “There was no jealousy among the inmates. They took pride in watching this man create. They stood around and applauded and basked in the glow of these transcendent images.”

Black remained Inmate No. 793362 and got no special treatment for his labor, Monroe said.

“He just did it,” Monroe said, “because he loved doing it.”

Monroe said as far as he knows, all the murals Black painted in prisons continue to greet inmates, visitors and staff, and the ones at Hillsborough Correctional are the only ones possibly in danger of disappearing.

What would be lost if those murals are destroyed?

“If you realize the effect these murals had on the inmate population, they’re priceless,” Monroe said. “They’re Highwaymen paintings. Ones of that size – some are 15 feet long – could go for a small fortune to some collectors. They are wholly unique. What a cool thing to have for a history or art museum.

“It’s hard to pin a market price on them, assuming they’re movable, since there are no comparisons to be made and they’d require special handling,” Monroe said. “I can say, though, that the prison murals are Al’s finest paintings, the painterly qualities finer and freer, the images more resonant and connected, and the idea behind them more alive and alluring.”

Hillsborough Correctional’s new owner, Eisenhower Property Group, has not revealed what it plans to do with the property. Group president Jeffrey Hills could not be reached for comment.

After Hillsborough Correctional closed, AEI Consultants was called in to inspect the site.

Meagan Hrenko, an environmental engineer with AEI Consultants who was at the prison two weeks ago, said she was conducting a routine assessment of the property and noticed the murals during the walk-through.

Hrenko said she is familiar with Highwaymen art because her mother and grandmother are both collectors; she also owns two works by James Gibson, one of the Highwaymen.

“I do a lot of assessments on abandoned and vacant property and often find interesting street and urban art that I document as a hobby; however, these murals were different,” she said. “I knew the moment I saw one signed A. Black that they were indeed Highwaymen murals. They were stunning.”

Should the plans call for a leveling of the buildings, the murals could be saved, but it wouldn’t be easy or cheap, said Robin Nigh with the city of Tampa’s arts division, which has placed and/or moved other works of art in public places around the city.

“I am aware of these murals and the artist but have not seen them,” she said.

Nigh said preservation options are limited.

“Examples I have seen discussed by my peers in the field are either to save and relocate the wall itself, where stabilizing is an issue, or knock down the surrounding area and build the new structure around it,” she said.

“Both are very expensive and time consuming options.”

Black, 69, was released from prison in 2006 but remains on probation for another 10 years, corrections records show. He lives in Fort Pierce and continues to paint, he said. He finishes four paintings a day, on the days he paints, and his work on one art dealer’s website is fetching between $850 and $1,250 each.

He began selling his paintings and those of other Highwaymen in the 1960s, cruising up and down U.S. 1 and setting up roadside stands along the east coast of Florida around Fort Pierce.

Through the years, Black has maintained his technique is self-taught and that he learned the style by fixing the smudged work of his artistic colleagues that got damaged in the back seat or trunk of his Ford Galaxy.

Often, his paintings include three white birds against a blue sky, symbolizing the Holy Trinity. On occasion, he will paint a fourth white bird lagging behind.

That bird, he said, is him. 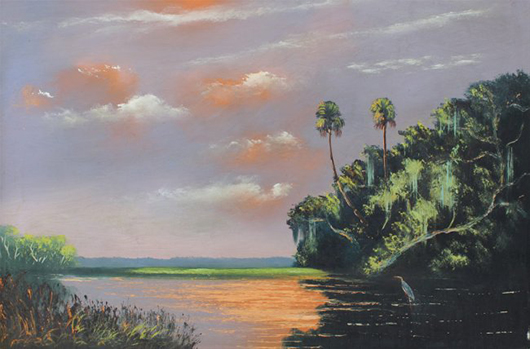