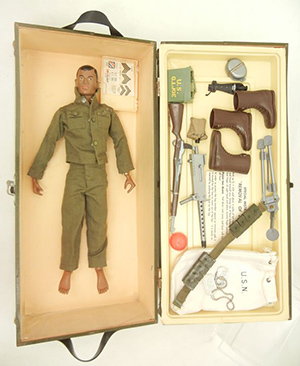 ATTLEBORO, Mass. (AP) – G.I. Joe, a military action figure aimed at American boys, was born in the mid-1960s, just as the Vietnam War was beginning to gain momentum.

Last month, Joe, the brainchild of Pawtucket-based Hasbro, celebrated his 50th birthday. But for a 50-year-old, the pose-able man of action turned cultural icon is still looking pretty good.

With millions of figures and toys sold and being featured in starring roles in comic books, on TV and in the movies, G.I. Joe still qualifies as Real American Hero – and a toy-selling phenomenon.

“Joe stood for everything that was meant to be good: Fighting evil, doing what’s right for people,” said Alan Hassenfeld, the 65-year-old former CEO for Hasbro whose father, Merrill, oversaw G.I. Joe’s development in 1963.

G.I. Joe has been reinvented several times over the years. He started out as a 12-inch-tall hunk in khakis based on the ideas of toy designer Stan Weston.

In the 1980s, Joe was downsized to a 3 3/4-inch figure whose mission was to combat imaginary enemies from Cobra, an evil terrorist organization. This year, Hasbro plans to release a special, 50th anniversary Joe in the smaller size through Toys R Us stores along with new items in its line of related building sets.

G.I. Joe also became the star of his own TV show and later the basis for blockbuster Hollywood films.

Don Levine, then the company’s head of research and development in the 1960s, is often credited as the “father” of G.I. Joe for pushing the toy through design and development.

Levine, who served in the Army during the in Korean War, said he got the idea for the moveable figure as a way to honor veterans.

But, Levine knew a soldier figure would be a hard sell. It took several years before the project received Hasbro’s full backing.

“Most boys in the ’60s had a father or a relative who was or had been in the military,” said Patricia Hogan, curator at the Strong National Museum of Play in Rochester, N.Y., home to the National Toy Hall of Fame. “Once you’ve bought Joe, you need to buy all the accessories and play sets and add-ons, which was great for business.”

A major concern early on was whether boys would accept a toy in the form of a pose-able male figure – in other words, a doll.

So, Hasbro thought up another term for their product.

“G.I. Joe wasn’t a doll,” said Ron Rudat of Attleboro, a designer who worked on accessories for the original G.I. Joe in the early 1970s and later helped spur Joe’s revival in the 1980s. “We called him an action figure.”

Introduced in 1964, Joe remained a popular toy through most of the 1960s until opposition to the war in Vietnam caused parents to pull back from military-related toys – and Joe in particular.

Faced with declining popularity, the original G.I. Joe was discontinued later in the 1970s. But, a comeback was just around the corner.

The inspiration turned out to be a firefight from a time long, long ago in a galaxy far, far away.

“Star Wars resulted in toy figures that were very popular at the time,” Rudat said. “Hasbro was very impressed by that.”

Rudat, who by that time was a key toy designer at the company, remembered how a chance event seemed to reignite enthusiasm for G.I. Joe.

“I was working on a truck and presented it at a marketing meeting in green camouflage colors,” he said. “That started a lot of people thinking.”

Not long after, Hasbro decided to try a resized Joe that would be smaller and more affordable than the original 12-inch figure, but with more characters, accessories and enemy figures.

Rudat, whose father had served in World War II and who was raised to revere those who served their country, was delighted.

“They asked me to design figures, and I remember thinking, ‘Great, that’s right up my alley.’”

The company first tried a modest line of Joes and accessories in case the new, downsized soldier bombed. But he didn’t. He was a hit.

Rudat ended up designing more than 100 figures for the new line, plus sophisticated accessories like an assault boat. He also invented the logo for the evil Cobra organization, the original of which hangs framed in his home.

Along with the movies, comic books and TV, G.I. Joe has inspired a legion of diehard fans and collectors. Many of the more devoted enthusiasts gather each year at the GIJoeCon, an annual convention held by the G.I. Joe Collector’s Club.

Rudat, who was hired by Hasbro right out of art school, no longer works for the company. But, he remains proud of his role in helping revitalize G.I. Joe and for the care and authenticity that he and others put into crafting the legend.

“We did a lot of research on what a modern soldier would wear, what kinds of tools he would use,” he said. “We even went to the Army’s Natick labs and saw the new helmet they were designing before it was issued to the troops.”

Today, Rudat works in his home studio surrounded by books, pictures and military uniforms and accessories dating back to the 1850s. There’s also a case for his father’s World War II decorations from the Marine Corps, a treasured keepsake.

“In designing accessories, I got a lot of ideas from things the Marines used,” he said.

A talented artist from childhood, Rudat continues to paint stunning landscapes and still lifes in oils and acrylics, which he exhibits and sells at local galleries.

Rudat and other Hasbro veterans starred in a recent DVD documentary on G.I. Joe created by Rudat’s video artist son Tristan. More information about Rudat and the film, Code Name: Blast Off, can be found at the movie’s Facebook page. 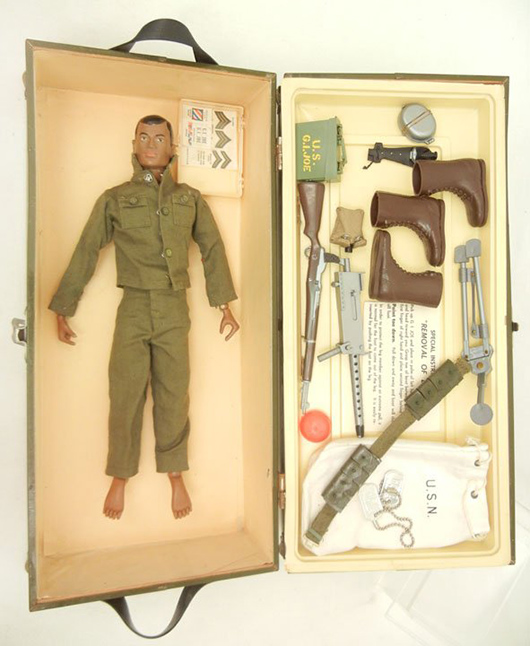