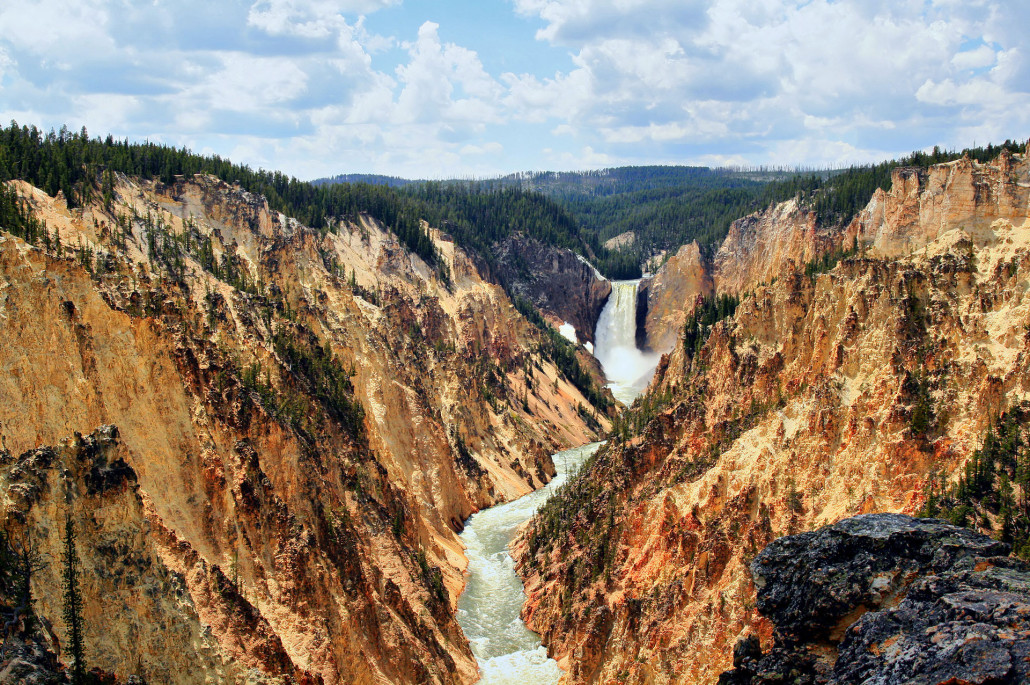 Don Dickens was convinced he would find the Fenn treasure near the Grand Canon of the Yellowstone. Brocken Inaglory image. This file is licensed under the Creative Commons Attribution-Share Alike 3.0 Unported license.

SANTA FE, N.M. (AP) – Don Dickens reached a peak on The Promontory at Yellowstone National Park, certain he would saunter down a few hundred feet and find the 40-pound chest of treasures that Santa Fe author and artifacts collector Forrest Fenn says he hid six years ago, somewhere in the Rocky Mountains.

What Dickens discovered, like thousands of other treasure hunters, was disappointment. The box wasn’t there, reported The New Mexican.

Dickens, 44, said that, as he and a cousin descended the mountain that day in August, feeling dejected and disillusioned, they came to a conclusion: Fenn must have moved the treasure. But why? Dickens’ cousin, Steve Riley, felt his chest begin to cramp. They were sure it was a heart attack. They later learned he had a severe digestive condition, one more aggravation to add to the day.

For most of the tens of thousands of people who have worked to solve a poem purportedly filled with clues to the treasure’s whereabouts, and have set out into the wilderness to find the trove, the hunt is a quirky family outing, a one-time adventure, an ongoing hobby or even a dedicated passion that gets them outdoors and “away from the humdrum of their daily regimens,” as Fenn put it in a recent email. For some, however, chasing Fenn’s fortune – and fame – has become an obsession that has come with mounting travel costs and enormous health and safety risks.

Dickens, a truck driver from West Virginia, estimated he spent more than $10,000 on his trip to Yellowstone. He didn’t regret the expense, though he was rattled by Riley’s medical troubles, realizing the quest could have had a much darker ending for the pair than the shock of coming up empty-handed.

One man, 54-year-old Randy Bilyeu of Colorado, died on a search for what some estimates suggest could be $3 million worth of gold, jewels and other valuable artifacts.

So far, no one has come forward with the treasure in hand, and some are beginning to wonder if it’s really out there. But since the hunt began in 2010, it has brought international fame to 86-year-old Fenn, a decorated Vietnam War fighter pilot, art dealer and amateur archaeologist with a complicated reputation in the world of antiquities.

He has appeared in national publications and on a TV series. His large fan base regularly inundates him with letters and emails. One of his favorites is from an 8-year-old girl, who wrote, “Mr. Fenn, if I find the treasure do I have to share it with my brother?”

Dozens of search enthusiasts gathered in Santa Fe in June for a Fennboree to honor him and share stories of what some call a life-changing journey.

Over the years, Fenn has regularly corresponded with fans, but he recently announced that, on doctor’s orders, he would be scaling back on blog posts, emails and other activities related to the search. The statement drew a host of messages from well-wishers.

“After addressing 100 or more emails a day for several years my circulation is finally making demands on my body,” he told The New Mexican in an email. “My 86 years on this planet also are making themselves heard.”

Fenn, who has a passion for antiquities, has drawn criticism from some in the archaeological community for his amateur pursuits in the field. Thirty years ago, he purchased a ranch in the Galisteo Basin that contained part of the San Lazaro Pueblo ruins and spent years excavating the property. He sold the site a few years ago, he told The New Mexican, but “I have all of the artifacts in my possession, and I will never sell any of them.”

Archaeologists say removing objects from an ancient site takes them out of the context of how they were used in the community and can hinder scholarly research.

“Archaeologists tend to focus on context, and the artifact or object is only a small part of the larger whole,” said Eric Blinman, director of the New Mexico Office of Archaeological Studies. “Second, an archaeological site is destroyed by excavation, whether by a highly trained archaeologist or by a kid. The difference is in the level of documentation by the archaeologist.”

Fenn has teetered on the brink of federal antiquities laws. In 2009, FBI agents raided his home as part of a controversial crackdown on alleged artifact looting in the Four Corners area. Two people targeted in the case reportedly committed suicide, including a man from Santa Fe. Fenn was never charged, but agents seized a few items from his home. He declined to answer questions about the raid for this story.

Fenn has overwhelmingly drawn praise since he launched the treasure hunt, but he found himself uncomfortably in the national spotlight in January, when Bilyeu vanished while searching near Santa Fe.

Determined to get to the spot where he was sure the trove was hidden, Bilyeu had set out on a quest along the Rio Grande, despite temperatures in the low 20s and the threat of snowstorms. Troubled by the man’s disappearance, Fenn chartered a helicopter and joined volunteer crews who were scouring the riverbanks.

Santa Fe police confirmed that a body found in early July near the Rio Grande, a few miles north of Cochiti Lake, was that of Bilyeu.

“He’s obsessed with looking for treasure,” his ex-wife, Linda Bilyeu, said in January.

When she learned his body had been identified, she told The New Mexican, “We’re disappointed that he lost his life over a treasure hunt.” She doesn’t believe Fenn has hidden a treasure, and she has asked him to call off the hunt for it.

The state spent nearly $10,000 searching for Randy Bilyeu with ground crews, a helicopter and a dive team, according a July report on KOAT-TV.

A Virginia woman seeking Fenn’s treasure chest prompted three rescue missions this summer in Wyoming, according to the Casper Star-Tribune. On one occasion, she and a boyfriend, both poorly equipped, spent four days lost in the forest, the newspaper said. In another expedition for the treasure, she broke her ankle.

A 33-year-old Texas woman chasing Fenn’s treasure spent a night in freezing temperatures near Bandelier National Monument in the early spring of 2013.

Two people from Washington state were rescued twice in the back country of Yellowstone in 2014 and faced a series of charges, according to several news reports. Darrell Seyler told Outside magazine that he nearly drowned at Yellowstone when the pair’s raft overturned in frigid, fast-moving waters.

Several people have been arrested for illegally digging on public lands.

“You have to be authorized to put a shovel in the ground on forest land,” said Mike Bremer, an archaeologist with the Santa Fe National Forest. One man was found digging for treasure near the Pecos River, but Bremer hasn’t seen evidence of any damage to archaeological sites in the area. That was a big concern when the search was launched, he said.

Dickens said he’s heard that people have gone bankrupt trying to find Fenn’s treasure. Some, he said, have ended up jobless and even homeless.

“I regret that some treasure hunters have invested more in the search than they could afford, although those numbers are small,” Fenn said. “I also regret that several people have become lost in the winter mountains. I have said many times that no one should extend themselves beyond their comfort zone, physically or financially.”

Asked if he had expected some people to become addicted to the search, Fenn said, “Yes, but in the same way gold miners, gamblers, hunters and baseball fans become addicted.”

After his search at Yellowstone in late August, Dickens drove to Grand Junction, Colorado, to put his ailing cousin on a train home to Mississippi, and then he came to New Mexico, anxious to tell his story and hoping to meet with Fenn. But the day after Dickens reached out to the author in an email, Fenn announced he was cutting back on his correspondence with searchers.
In an interview with The New Mexican, Dickens insisted he’s not like the searchers who get obsessed. And he won’t go searching again, he said, because he’s certain he found the spot where the treasure once was hidden by solving the clues in a poem that appeared in Fenn’s 2010 autobiography, The Thrill of the Chase, and also was published in a second book, Too Far to Walk, in 2013.

He pulled up a Google Earth image of the site on top of The Promontory, a peninsula in the middle of Yellowstone Lake, and pointed out a cluster of objects that resembles an image on the cover of Too Far to Walk – a shadow of a man holding a staff. Sitting near what Dickens calls “the rock man” is an object that appears to be a box.

But when he and his cousin reached the site, neither the box nor the rock man was there.

“The only one with a motive to remove the chest, and especially to move the little rock guy was Mr. Fenn,” Dickens said. He believes Fenn retrieved the treasure so that “he could have his cake and eat it, too.”

Fenn said via email that he hasn’t moved the treasure. As far as he knows, it’s still sitting where he left it. “I know that some have been within 200 (feet) of the treasure because they revealed their exact location to me,” he said.

“When they go to retrieve, and it isn’t there,” Fenn said, “they either claim someone has already found it or the whole story is a hoax. For most of them, being wrong is not part of the equation.”

“Interestingly,” he added, “nearly all of them are still searching.”
___

By CYNTHIA MILLER, The New Mexican

Authorities ID remains as those of missing treasure hunter