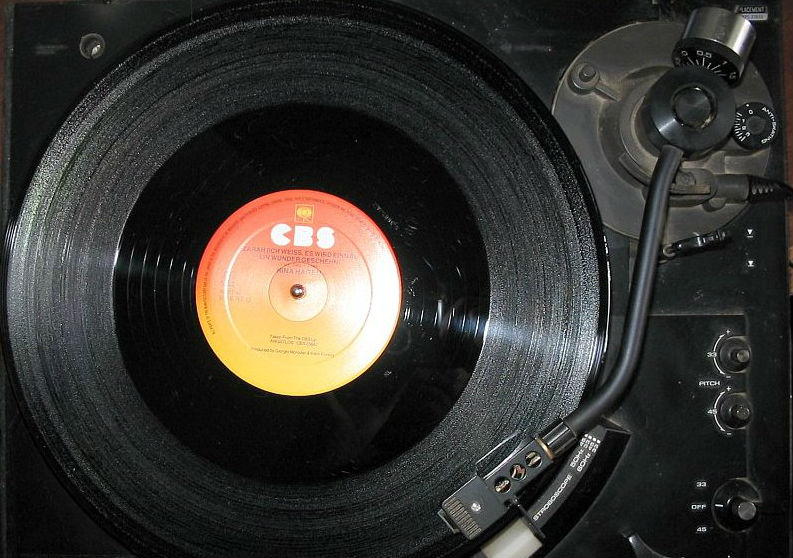 A late 20th-century turntable and vinyl record. © 2004 by Tomasz Sienicki. This file is licensed under the Creative Commons Attribution-Share Alike 3.0 Unported license.

Albums at that time, nearly dead in the music industry, remained a niche of audiophiles and collectors. But new pressings by small and obscure bands hooked Harrington on the vinyl music medium and partly led to a stint working in a record store.

A decade ago, in his mid-20s, he opened his own record store, Embassy Vinyl, in the 300 block of Adams Avenue in downtown Scranton. The shop remains a favorite of music enthusiasts, ranging from graying middle-agers and baby boomers who grew up with albums to youngish hipsters discovering vinyl for the first time.

Harrington’s introduction came while growing up in the Sweet Valley area of Luzerne County.

“It’s something I started to get more into as a teenager. A lot of smaller bands, they still pressed records back then; little punk bands, they never gave it up. So you’d pick it up,” and buy and play records, Harrington said.

After graduating from Lake-Lehman High School, Richard Joseph Harrington earned a communications degree from Luzerne County Community College in 2004. With jobs in that field scarce, he worked in a record store for a few years before deciding to try it on his own.

“I just liked doing it. I just liked being around that stuff,” Harrington said. “I figured after a while I could possibly do it on my own. I lucked out and bought a huge collection, and then the ball just started going.”

He named his shop after a favorite song, Embassy Row, from one of his favorite indie rock bands, Pavement.

“I was going to call it Embassy Row Records, but that was taken. So I just shortened it to Embassy Vinyl. Done. Easy,” Harrington said.

His store’s location for its first few years was at 342 Adams Ave. After a former comic book shop a few doors away at 352 Adams Ave. closed, Harrington moved Embassy Vinyl there, to have more space.

Customers finger-flip through cardboard boxes filled with albums and paw through shelves jam-packed with records, CDs and DVDs. Wall decor befitting a dorm includes posters of Andy Warhol’s gunslinging Elvis, a 1971 T-Rex concert tour and a giant skull with hypnotic swirly eye sockets, as well as a kitschy velvet Elvis painting and a circa-1970s promo for a professional wrestling 15-man battle royale featuring Andre the Giant.

The store’s bright yellow logo sign features a record centered in a star, with two lightning bolts and a banner logo urging, “Know Your Music.”

“I try to keep my shop as old-school as possible when it comes to being a record store,” he said. “We’re a record store, an independent record store. With this kind of store, it’s more the ‘luck of the draw’ is your thing. You come in looking for ‘A,’ hopefully you find ‘A,’ but you might leave with ‘B.’ It’s always the stuff you didn’t come in for that’s the most exciting.”

Harrington also buys collections. He often gets calls from folks looking to unload albums and will go scour through their attics, barns and basements. Most of his business comes from repeat customers buying albums.

Mitchell Winters, 20, of Tunkhannock, discovered Embassy Vinyl two years ago and has since been a regular customer.

“I started getting interested in records after seeing them being sold in bookstores. Then I heard about (the annual, national) Record Store Day, and that kind of unleashed my madness on me,” Mr. Winters said during a visit to Embassy Vinyl on Monday. He picked up a pair of albums, Bob Dylan’s 1975 Blood on the Tracks, and a greatest-hits compilation of Leonard Cohen. The total cost: $31.80.

“It’s worth it, I would say. It’s always well worth it,” Winters said of albums.

Harrington plans to plug along.

“When you’re 25, you don’t think what the future’s going to hold, you just hope you’re going to build something that’s going to last a little bit, and that’s what I’ve done.” Harrington said. “I’m pretty pleased with it. Ten years is pretty good. All in all, I think it’s a pretty good victory.”
___

By JIM LOCKWOOD, The (Scranton) Times-Tribune

Information from: The Times-Tribune, http://thetimes-tribune.com/