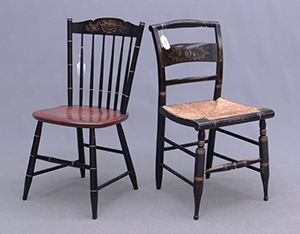 The styles of Hitchcock chairs have changed little in 195 years. Image courtesy of LiveAucitoneers.com Archive and Copake Auction Inc.

WINSTED, Conn. (AP) – Hitchcock Chair may not be the furniture juggernaut it once was but it is gradually making a comeback.

Now run by the owners of Still River Antiques, which bought the Hitchcock name in 2010, the nearly 200-year-old Riverton-based company has received its largest order of chairs since going back into operation.

Co-owner Rick Swenson said a group of investors contacted him just before Labor Day about a new restaurant they were building in Carlsbad, Calif. It’s called the Green Dragon Tavern and Museum and it’s modeled after a historic Boston bar of the same name.

The Boston Tea Party was planned at the original Green Dragon Tavern and Paul Revere was sent from there for his famous ride to Lexington. Historians call it the “headquarters of the revolution.” One of the investors, Bruce Bartlett, is originally from the Boston area. Swenson said Bartlett is an avid collector of Revolutionary War memorabilia and much of that collection will be on display in the museum.

The investors ordered 152 Hitchcock chairs. The largest order Swenson and his partner, Gary Hath, had up to that point was eight. The order also came after business had struggled for most of the year.

“It was a struggle just to meet payroll,” Swenson said.

The order has been split into two parts, with the first 77 chairs expected to go out this week. The chairs are black with the front of the top rail of each chair stenciled with a patriotic image, such as the pilgrims landing at Plymouth Rock in 1620, the Boston Tea Party of 1773 and Paul Revere’s ride in 1775.

Swenson said the images were part of the inventory when he and Hath bought the Hitchcock brand. There are hundreds of stencils, all made by Hitchcock employees, but the patriotic ones apparently weren’t used too often, he said.

John Lek, the general manager and senior vice president of the tavern, said he and his partners were aware of the Hitchcock brand and contacted the business because they believed Hitchcock would make the authentic-looking New England-style chairs they wanted.

“They were on the spot in terms of meeting our needs from a service standpoint,” Lek

Lek said the business representatives of the restaurant have not decided on a design for the remaining 75 chairs but he figures it will most likely be another patriotic theme with possibly the restaurant’s logo. Lek said he hopes the restaurant will open by Jan. 1.

While Hitchcock Chair has grown from four to 14 employees in less than three years, Swenson said he has not needed to hire any additional workers for the restaurant project. About 40 percent of all work is outsourced to about a half dozen small longtime manufacturers around New England, making various components. Hitchcock in its prime did the same, he said.

Annual revenue is nearly $1 million but so are expenditures so profits thus far are small.

“My partner and I have been very careful about spending money,” Swenson said, adding that he and Hath are looking to buy some new equipment but are holding off for now. “We have no debt so on paper we’re profitable.”

They are working with the state Department of Economic and Community Development about expanding at some point but are “taking it slow,” Swenson said. Much of the manufacturing and assembly is now done at Whiting Mills, a former factory building at the corner of Whiting Street and Holabird Avenue that now houses some 30 to 40 tenants who are primarily artists and craftsmen. But they would like a space where all of the manufacturing, storage and loading docks are on the same floor.

“It is our intention to stay in Northwest Connecticut,” Swenson said, noting that its main retail store remains in the Riverton section of Barkhamsted with Still River Antiques.

Officials from both Winsted and Barkhamsted are tickled that Hitchcock is rebounding.

“It’s a wonderful success story,” Winsted Economic Development Commission Chairman Richard Labich said. “Any time you can attract a company in to our town that in two years has 14 employees, that’s the kind of operation that we’re looking for…Success attracts success.”

For Barkhamsted First Selectman Donald S. Stein, the return of Hitchcock is both a nod to the past and the future.

“It’s a big part of our heritage,” he said. “Anything that creates jobs in town, I’d love to see them expand and expand as much as the possibly can. They’re good people and they make a good product. The more they’re able to do, the happier we all are and the happier they are.”

While Hitchcock, founded in 1818, benefitted greatly from the post-World War II boom and the Colonial revival, Swenson said the company is now trying to capitalize on the market that is willing to pay a little more for “well-made, high-quality American-made furniture.” The average Hitchcock chair retails for $399.

Hitchcock recently opened a new showroom in Wilton that it shares with another Colonial-style furniture maker, Eldred Wheeler. Swenson said the original Hitchcock company had its own store in Wilton.

“It’s a good match for us because the lines are similar but we don’t directly compete,” he said of Eldred Wheeler, which makes primarily bedroom furniture.

Swenson said Hitchcock’s future success lies largely in selling its products wholesale. He said he wants to continue to partner with small mom-and-pop furniture stores, which would feature Hitchcock furniture on a section of their showroom floor.

“We’re starting to trend back toward the positive,” Swenson said. “We’ve got a lot more interest from other dealers that want to start buying wholesale so we’re looking to put out a sale representative that would cover New England.” 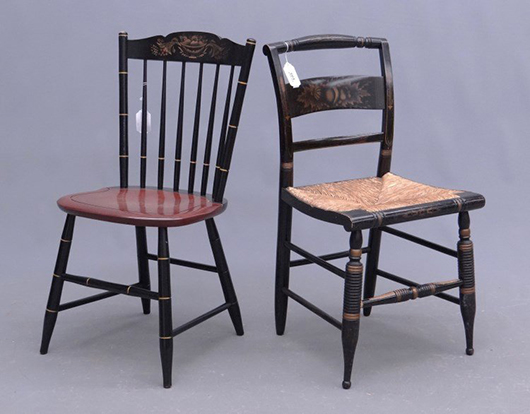 The styles of Hitchcock chairs have changed little in 195 years. Image courtesy of LiveAucitoneers.com Archive and Copake Auction Inc.