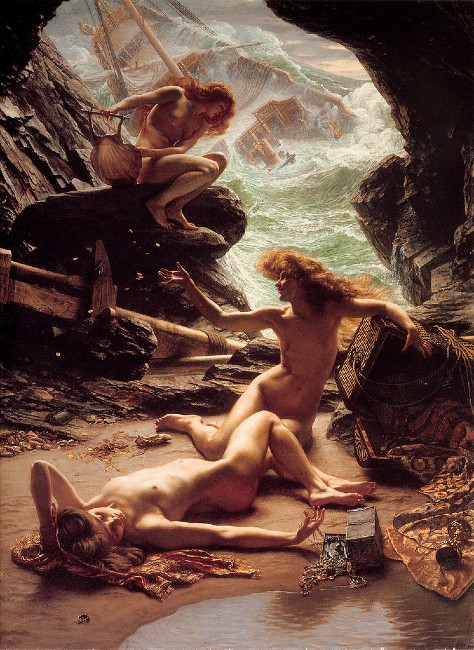 NORFOLK, Va. (AP) – The nymphs were invited to visit Italy this spring, but they are way too important to travel alone. Curator Lindsay Neal would have to escort them.

The nymphs, or rather, the 1902 painting The Cave of Storm Nymphs by Sir Edward John Poynter, is a favorite at the Hermitage Museum and Gardens in Norfolk.

The Musei San Domenico in Forli wanted to borrow the piece for its spring exhibition. Since it would be the first international loan for the Hermitage, Neal wanted to tag along. One can’t just plop a Poynter in a package and pop it in the mail.

Moving a masterpiece is much more complex.

The Hermitage hired a Philadelphia fine arts shipping company to design and build a crate for the painting. In early February, Neal monitored the packing and its placement in a climate-controlled truck for the first stop in Philadelphia. The painting went through special TSA pre-screening, then went on to New York where Neal eyed the crate until it was stowed carefully on a plane. Once in Rome, the process was reversed for a secured six-hour drive across Italy.

Before patrons get to gawk at art in museums, teams of curators, museum directors, shipping companies and art registrars create an orchestrated dance of sorts to move the fragile, the huge, the rare, from one museum to the next. Not only are the pieces often irreplaceable, they also are valued in the hundreds of thousands, if not, millions of dollars.

It involves a white-gloved treatment (cotton, please, or powder-free nitrile) in controlled environments that are monitored for temperature and humidity under lights that are doused to the just-right brilliance. The lighting requirements differ depending on if the art is a 5,000-year-old ceramic sculpture or 15th-century watercolor.

“People think you just bring things in, put them in a case and lock it. Most times, it’s not like that at all.”

In mid-March, Heather Hakimzadeh, curator at the Virginia Museum of Contemporary Art in Virginia Beach, and two assistants were slowly unwrapping a large framed canvas for its “New Waves 2020” show.

It was tightly bounded in clear wrap.

“Do you want me to hold the plastic up?” Hakimzadeh asked. Tight wrappings pressed against a canvas can pull paint off of the art.

The framed image was placed on a padded table underneath soft lights to examine in what is called condition reporting. The art piece is compared to photos and notes that were made prior to shipping and sent with the piece to make sure there was no damage in transit.

This show is an exhibition of Virginia artists and most of these pieces were packaged and hand-delivered by the artists themselves.

Typically, when MOCA receives art, curators let it to rest untouched for at least 24 hours for acclimation to the new environment. Humidity, especially in Hampton Roads, can warp a frame and image or both.

The pieces the trio looked at now had come from Richmond and didn’t need to wait.

Preparator Hicks and gallery technician Becca Bollman, like Hakimzadeh, wore white gloves. They didn’t want the oil in their hands to transfer to the work.

They also wore fitted clothes because they didn’t want loose sleeves to touch or lasso a piece of work and knock it over. They all wore their hair pulled back and no jewelry or makeup, nothing that could leave a speck or scratch.

Hicks first took photos of the image and then used the flashlight on the phone and hovered over the frame.

He called out if he noticed something on top of the glass that could be gently swept away like thread or if there were marks on the canvas itself.

He and Bollman then held the framed piece high, turning it over and examined the back.

Each piece gets deliberate care. It can take days or weeks to set up an exhibition.

“The art is the number one thing,” Hakimzadeh said.

Old and delicate treasures are the specialty of Jeanne Willoz-Egnor at the Mariners’ Museum and Park in Newport News.

As director of collections management and curator of scientific instruments, Willoz-Egnor manages pieces that date back to ancient Egypt and that are as exceptional as silverware pulled from the Civil War-era USS Monitor.

The museum’s object collection has about 32,000 pieces ranging from smaller than a thumbnail to more than 90 feet. Its library holds more than 2 million books, vessel plans, maps, charts and photographs. The museum is often tapped for loans.

“It’s a huge collection and each piece means a different kind of care,” Willoz-Egnor.

One of her more recent acquisitions is a gut-skin parka that she discovered online at a tribal arts auction company in Germany.

The Mariners’ has images and boats of Inuit indigenous people from Alaska. However, the clothing of the people would add more depth to the collection.

The museum successfully bid for the parka last fall for about $3,250 and then had to figure out how to get it here.

She needed special permits to import it, and she needed to know the genus and species of the animal guts in the coat. She started her research. Could it be made of the intestines of a spotted, ringed or bearded seal or maybe a walrus or beluga whale?

“Being a protected species, you have to get particular permits,” she said. “The rarer it is, the more permits it would require.”

She also had to know the coat’s country of origin and its age.

She ruled out whale and walrus after studying the width of the bands on the coat. Using information from the auction house, Willoz-Egnor learned that the coat had been acquired in June 1964 in Point Hope, Alaska, by a geologist. Someone on her staff found the geologist and talked to him. They decided that the parka probably dates to 1950-1960.

She also contacted a museum in Alaska and a gut-skin specialist there who told her she was sure the coat was made from a bearded seal.

Willoz-Egnor then found an international shipping company that specializes in artifacts.

“They aren’t going to call Mailbox Etc. to pick this up,” she said.

After three months of research and getting permits, the parka arrived in Newport News in mid-February, packed securely in soft foam and Tyvek.

The Mariners’ Museum and Park staff in Newport News examining a gut-skin parka shortly after its arrival in mid-February.

Allen Hoilman was planning a Hampton One exhibition to open last June at the Hampton History Museum to display all things about the popular racing vessel.

He learned that a museum in Maryland had an unfinished hull and he wanted to borrow it as showstopper for the show.

“I like building exhibits with a centerpiece,” he said, “so that when people walk by they stop and think, ‘Oh, what is it?’ That sometimes can be a small, spectacular thing, but I’ve found big, inexplicable things can draw attention.”

The gallery space, however, is on the second floor and there was no way to get a boat on an elevator.

The museum was going through a renovation and having its windows replaced. Hoilman asked if the one in the exhibition space could be built 6 feet by 6 feet and could open and close.

The day the hull arrived, the street behind the museum was closed and a crane hoisted the boat up to the second floor. It wouldn’t fit in the window. The hull was 3 inches too wide. Workers tilted the hull and eased it in.

“We will be faced with the opposite process in about a year,” Hoilman said.

Hoilman had experience in moving chunky stuff. He worked at the North Carolina Museum of History and had to get a racing car into a third-floor space for an exhibition.

“I like large artifacts,” he said. “It’s a lot of fun figuring out where they are going to go.”

By DENISE M. WATSON, The Virginian-Pilot