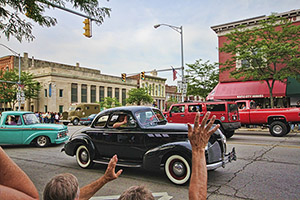 Classic cars cruising on Main Street during Goshen’s First Friday event in July 2011. Image by Bbeachy2001. This work is licensed under the Creative Commons Attribution 3.0 License.

GOSHEN, Ind. (AP) – When they renovated their first building in 1985, Dave Pottinger and his wife, Faye Peterson-Pottinger, never imagined downtown Goshen would look the way it does now.

“It was an evolution,” Peterson-Pottinger said while sitting at The Electric Brew on Saturday, Sept. 27. The business is housed in one of the buildings they helped restore.

Peterson-Pottinger said she and her husband renovated some of the downtown buildings as the opportunities came up.

Eventually their daughter, Maija Stutsman, and their son-in-law, Jeremy Stutsman, joined them, and their restoration projects became a family affair.

“There was a point where we all would’ve moved. When we all would have left Goshen,” Maija Stutsman told The Elkhart Truth. “Because it was getting to the point where there was nothing that could tie us here. There wasn’t real community involvement for us.”

Almost three decades have passed since the Pottingers started renovating buildings, and the four family members now work with about 50 businesses in the downtown area.

The family was nominated to receive the 2014 Larry A. Conrad Civic Service Award from the Indiana Association of Cities and Towns and was announced as the winner Sept. 10.

The Larry A. Conrad Civic Service Award honors the contributions made by private citizens, companies or civic organizations to the local government.

In a news release sent out by the Indiana Association of Cities and Towns, the organization noted the contributions made by the family.

Aside from working on the preservation of historic buildings, the family has collaborated with the city to add streetscape features and participated in the city’s downtown business improvement district board and city council, according to the news release.

Pottinger and his wife ultimately became the catalysts in the restoration of downtown when other developers and businesses started looking at their work, Goshen Mayor Allan Kauffman said. Kauffman nominated the family.

“There aren’t very many people like Dave Pottinger who come along and are willing to take on the challenges that he took on, and I don’t think he would’ve taken them on in Goshen if he hadn’t seen that there was some progress already made,” he said.

Goshen had joined the Main Street Program, which helps guide communities with the restoration of their downtown areas, Kauffman said.

Pottinger already had some experience renovating historical buildings when he and his wife began their work in 1985. That’s when they renovated the building at 1122 S. Main St. to start a business—a restaurant called South Side Soda Shop, which they eventually sold to their daughter and son-in-law, Charity and Nick Boyd.

For the past 14 years, the Pottingers have moved their projects up a few blocks and have been working on the restoration of the downtown area, Jeremy Stutsman said.

Both Pottinger and Peterson-Pottinger had a love for the arts and historical buildings. But they both went into the business of restoration knowing that downtown Goshen was “sliding toward darkness,” Pottinger said.

The vibrant Main Street one finds now in the downtown area was once full of vacant buildings. Many of them were boarded up a couple decades ago, including The Famous building that now houses The Gift of G.A.B or the Rexall Drugs building, which is now Kelly Jae’s Café.

They got the idea to build the Goshen Clay Artists Guild when Maija Stutsman took a pottery class in high school and her teacher started talking about having a space for clay artists in Goshen in the late 1990s.

Shortly after the guild was built behind Maple City Market, 314 S. Main St., the city called Pottinger and asked if he was interested in purchasing an old lumberyard along West Washington Street.

That vacant lot became the Millrace Center Farmers Market around the year 2000, Pottinger said. The Clay Artists Guild was later moved to the building behind the farmers market in 2004.

That was around the time Jeremy Stutsman started working with the family. Soon after, the Stutsmans were acquiring their own properties and restoring them.

“So all the opportunities came together. (The Stutsmans’) age and interest in wanting to join us, our interest in historic buildings, the town sliding down, people wanting to sell their buildings and nobody was restoring them,” Pottinger said. “Because that’s a tricky different business. There aren’t many people who do what we do. When we bought the Millrace Center everyone said, ‘Bulldoze, get rid of it.’ It was an old lumberyard falling apart. So it takes a special interest.”

You could say Pottinger is a hands-on kind of man. If you walk up the second floor of the municipal annex building in downtown Goshen, which is mostly unoccupied, you will find a detailed model of the city’s downtown, which Pottinger built himself.

“Where other people make canvases or design them on a computer, he builds them by hand,” Kauffman said.

Each one of Pottinger’s projects is a balance of revamping the structure and conserving the aesthetic aspects, something Kauffman calls “authentic urbanism.”

“For some of these buildings, they’ve preserved some of the historical artifacts (such as) signs and different architectural elements of the buildings,” said Mark Brinson, director of community development. “In some cases they’ve had to rebuild the façades. And those new façades really look original.”

Once the building is restored, Pottinger and his family wait until the right entrepreneur comes along.

“Doing what we do—the restoration—is the easy part,” Pottinger said. “Getting the right kind of clientele to come down, take a chance, set up a business, is different. And almost all of the businesses that we rent to are new. And they are almost all local people who have never owned businesses and want to start.”

Brinson refers to Pottinger’s business model and vision as holistic.

“He doesn’t look at each individual space and say, ‘What can I put in to generate the most rent?’ That’s the typical real estate investor mindset,” Brinson said. “He’s looking at the whole of the downtown and trying to figure what a good mix of uses are so they can complement and kind of feed off of each other.”

And the family’s goal, Brinson said, is not necessarily to attract visitors and businesses from out-of-town but to invest in downtown for the residents.

“But as a result, what we found is when we build a great downtown and a great community it attracts a lot of visitors so that’s brought in lot of additional business.”

Kauffman half-jokingly refers to the city’s business with Pottinger as a love-hate relationship.

“And then he gets mad at me and says, ‘I’m not investing in downtown Goshen!’ And couple months later he’s bought another building to (renovate).”

Asked what they plan to do next, the family looks at each other with twinkles in their eyes, and without giving anything away, they say they just plan to continue doing what they’re doing.

“One of the things that always concerns you is that you’re not going to be there forever,” Pottinger said. “And what’s the next generation going to do? Are they going to continue this? It’s easy to change, you can make something that will change everyone’s attitude quickly. I think we want to stay involved to try and influence the direction that this growth is taking.”

In the meantime, the family celebrates its successes. For Peterson-Pottinger, it’s that the community has started getting involved, that residents are supportive of each other and that they appreciate arts and culture, she said.

“I must say, Goshen is a very special place to me,” she said. “If you create an interesting place, these people are going to support it. And then you throw in First Friday, which has been very successful, so you have a pretty place to come to, interesting activities, and it works.”

Information from: The Elkhart Truth, http://www.elkharttruth.com 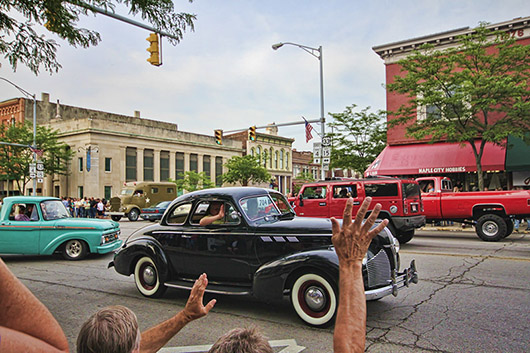 Classic cars cruising on Main Street during Goshen’s First Friday event in July 2011. Image by Bbeachy2001. This work is licensed under the Creative Commons Attribution 3.0 License.