HANNIBAL, Mo. (AP) – Mark Twain only lived in Hannibal, Missouri, for 13 years, but many of his most famous stories were inspired by this humble Midwestern city. A visit to Hannibal today, with its excellent museums, preserved historic sites and old-timey antiques shops, offers a way to appreciate the impact this place had on one of America’s best-known writers. And of course, Hannibal sits on the banks of the Mississippi River, which figured so large in Twain’s life and writing.

A mere $11 gets you a look at nine historic sites and museums, all within a few blocks of one another. They include the actual houses where Twain and the real children who inspired his characters Huckleberry Finn and Becky Thatcher lived in the mid-1800s. You’ll see the bedroom window the adventuresome Twain climbed out of as a boy; you’ll see the fence that his character Tom Sawyer persuaded other children to whitewash when he was supposed to paint it.

You’ll also get a real sense of what Hannibal was like when Twain lived here in the 1840s and early ’50s, and how this place fed his imagination and sensibility. This was no lonely rural spot; it was a bustling river town, with three blacksmith shops, a distillery, tobacco factory and two slaughterhouses, with pigs herded through the streets. Twain – born Samuel Clemens – was not a privileged child. After his father died, his mother couldn’t afford his 25-cent weekly school fee. He was apprenticed at age 11 to a printer, which led to work as a newspaperman. Later he was a steamboat pilot on the Mississippi. His pen name, Mark Twain, was a river call that described the water depth.

An interpretive center behind Twain’s boyhood home offers photos, exhibits and wonderful quotes from Twain’s writings that put his life and work in context. A museum gallery at 120 N. Main St. is filled with artifacts, from his top hat to 15 Norman Rockwell paintings created for special editions of Tom Sawyer and Huckleberry Finn. Twain’s quips, prominently showcased, can seem as fresh and cynical as a 21st-century tweet, like this one: “Suppose you were an idiot. And suppose you were a member of Congress. But I repeat myself.”

You can’t miss the statue of Tom and Huck at the foot of Cardiff Hill on Main Street. Sculptures of Twain stand in Schwartz Gardens and Riverview Park.

The museums also tackle the controversies over Twain’s writings. In his own lifetime, Adventures of Huckleberry Finn – about the wild, ragged son of the town drunk who runs away on a raft with an escaped slave, Jim – was banned because it was considered vulgar. In the late 20th century, the book was banned because Twain’s language and depiction of Jim were considered racist. One exhibit offers context for Twain’s views: Slavery was legal in Missouri during his youth; his family rented or owned slaves when they could afford it, and he’s quoted as recalling that nobody he knew ever questioned it. But one incident made him think twice about it, when he complained to his mother about a slave boy who sang and laughed incessantly. She responded tearfully that the slave child would never see his own mother again, and at least when the boy sang, “it shows he is not remembering.”

The Town and the River

For a small city (population 18,000), Hannibal offers some good eating. LaBinnah Bistro, 207 N. Fifth St., has friendly service, charming Victorian-era decor and an inviting dinner menu that includes fish, steak and Mediterranean dishes. LaBinnah is Hannibal spelled backward, named for the town’s LaBinnah Club, where Twain spoke on his last visit to Hannibal in 1902 – one of five trips he made there as an adult. The new Mark Twain Brewing Co., 422 N. Main St., offers burgers, a big selection of beers and other pub fare.

Hannibal has a wide variety of lodging. Treasure-hunters should check out the half-dozen antiques and gift shops on and around Main Street.

If you’re driving to Hannibal from St. Louis, about 120 miles (190 kilometers) away, get off the interstate and take the Great River Road, Route 79, which winds through tiny towns, fields and farms, with scenic stretches along the Mississippi.

Between March 15 and Nov. 1, riverboat cruises ore offered on the Mississippi from Hannibal, http://www.marktwainriverboat.com .

Copyright 2014. Associated Press. All rights reserved. This material may not be published, broadcast, rewritten, or redistributed. 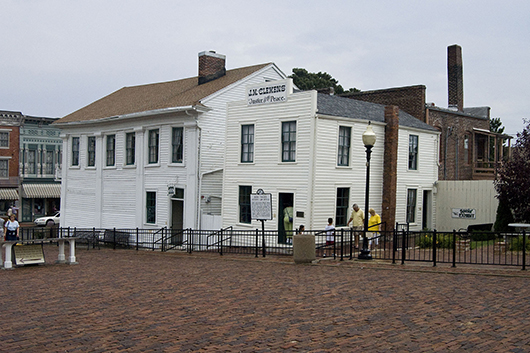 The office of John M. Clemens, Mark Twain’s father, who was the Justice of the Peace in Hannibal. Image by Andrew Balet. This file is licensed under the Creative Commons Attribution-ShareAlike 3.0 Unported license.