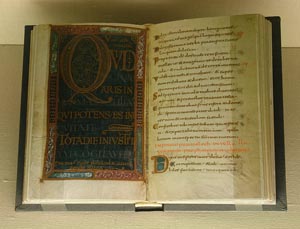 CHARLESTON, W.Va. (AP) – He found it, of all places, in a small antique shop right here in Charleston. “It was serendipity, just happenstance,” he said. “I was looking for something else.”

It was an ancient Psalter, a book of psalms painstakingly handwritten in Latin by hermit monks in the Netherlands nearly 800 years ago.

“It’s my newest and most exciting acquisition. It’s not just rare. It’s unique. There is literally only one. It was quite a find for me.”

He wasn’t surprised that it hadn’t attracted a buyer. “There would be no market for it in Charleston. It’s mainly of interest to nuts like me.”

Frank Martin collects medieval books. “Some men like fancy motor cars, I’ll pay a fortune for a good book. It’s a hobby and also a kind of passion. It enriches your understanding of history.”

An Alabama native who practiced law in Washington, D.C., Martin splits his time in retirement between Alabama and Charleston. “My daughter, Jessica Lane, lives here and we like the city,” he said in a noticeable Alabama drawl. “We could live anywhere. We live in Charleston by choice.”

His hobby started in 1987 with a visit to an old bookshop in Alexandria, Va. A student of Latin since high school, he spotted a crudely bound Venetian Bible printed in 1497 and “negotiated” a purchase.

“It was a beautiful book. And that’s when I fell in love.”

Along with its craftsmanship and age, he discovered a significant distinction. “This book was the first printed book ever to have a title page.”

He started shopping for old books in earnest, both in Alexandria and on the Internet. “If you’re interested,” he said, “things kind of pop up.”

The second step, his favorite part, is research. “It doesn’t take me long to buy a book. It takes a long time to figure out what it is. Nobody knows about this book,” he said, picking up one of his finds. “There is no date in it. You have to analyze the contents. It’s a tedious thing. But I’m mainly into that part of it, not the acquisition or possession.”

He had access to a rare book room at a seminary near his Virginia home. When working in Washington, he made frequent trips to the Library of Congress.

He searches for handwritten manuscripts and incunabula, a Latin word for “in the cradle” or “in swaddling clothes.” It refers to the infancy of printing, books printed before 1501. Gutenberg, the first to print a book with movable type, introduced printing in Germany in the 1450s.

“Any book printed in the first 50 years of movable type is valuable,” Martin said. “It was so long ago and there are so few of them. Through fire, water and war, so many were destroyed.”

Early printing methods could prove challenging. “Look at the print on this book. It’s microscopic by our standards. Imagine setting that type. You could only set maybe eight pages. Then you would break it up to set the next eight.”

His most valuable book is a New Testament volume printed in 1481, one generation after the invention of movable type. He found it at a book sale. “It belonged to a wealthy woman in California, Estelle Duhaney, who gave so much money to the Catholic Church that the pope made her a countess.”

In New York, inside a cigar box, he found a small square Bible five inches thick, an octavo. “You fold a sheet of paper to form eight leaves and you get the octovo,” he explained. “This one was all black and unbound. They didn’t know what they had.”

He had the book rebound in Magnolia Springs, Ala.

He discovered through research that the book was printed by a woman in 1549. “Experts for hundreds of years thought it was an incanubulum printed before 1500, but I found it was printed 50 years later by a woman in Paris, the widow of a famous printer.”

Bibles are the cheapest books for collectors to buy, he said, because there were so many of them. “Before we had books, we had scrolls. As long as people have written holy writ, there have been more Bibles because there is more demand. There are more Bibles printed every year than any other book.”

His collection includes a handwritten Ethiopian Psalm book. “You can’t read it. It’s all in the ancient language of Ethiopia. They didn’t develop printing until very late. They were doing liturgical manuscripts into the 18th century. This book isn’t so old, but it has these beautiful icons.”

All hand-painted on sheepskin, icons include the Ethiopian version of “The Madonna, Mary and Her Beloved Son,” with angels Michael and Gabriel standing watch on either side.

“And these are saints,” he said, carefully turning from one page to the next. “This fellow grew a beard so long he made clothes out of it. That’s an Ethiopian saint we don’t know anything about. And here’s a fellow who prayed so long his foot fell off. So God made him three sets of wings. An Ethiopian scholar told me that.”

The meticulous penmanship required of scribes hand-lettering liturgical tomes amazes him. “Think of the number of man-hours invested in a book. I don’t know how long it took. How many pages can a man do in a day? Two or three? They had one man who read from the original text and another man wrote it down.

“Then the Vikings would come and destroy all the books, and they had to start over again. That happened two or three times.

“A book used to be worth what a house was worth,” he said, “and now we just throw them away.”

Martin gives his ancient books extra special attention. He handles them gently, reverently. “And they go in a lockbox in the bank.”