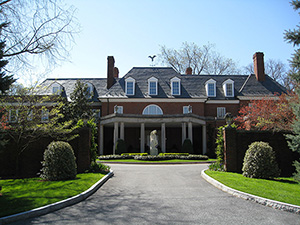 Hillwood Estate, Museum and Gardens, located at 4155 Linnean Avenue, NW Washington, DC. The estate is the former home and garden of Marjorie Merriweather Post. The house, originally known as Arbremont, was designed by John Deibert in 1926. Image by Jllm06, courtesy of Wikimedia Commons.

WASHINGTON (AP) – The story of Hillwood began with an end: the 1955 divorce of heiress Marjorie Merriweather Post from her third husband. Joseph Davies thought his wife, one of the richest women in the United States, would pay anything to stay in their Washington mansion and demanded a small fortune for his share.

“Being a good businesswoman, she thought that price was a little high, and she wanted some leverage,” explains her granddaughter, Ellen Charles. So Post started looking at other properties – more as a bargaining tactic than any real desire to move – and stumbled across a beautiful old house on 25 acres overlooking Rock Creek Park.

And just like that, the negotiating was over: Davies got the old house, which was later sold to the Washington International School. And Post, who inherited a fortune from her father’s cereal empire, bought Hillwood and turned it into one of Washington’s most beautiful attractions.

“I think it was meant to be,” says Charles, who is credited with taking the very fancy house full of very fancy stuff and turning it into a professional, world-class museum. Charles is stepping down after 25 years as board president and will be the last Post descendant to head Hillwood.

Charles was a 20-year-old bride when she first saw Hillwood, and it was dazzling. After two years of renovations and decorating, Post moved into the house in 1957 and filled it with her collection of Russian art and decorative objects, including two Faberge imperial Easter eggs, acquired when Davies was ambassador to Russia in the 1930s, along with 18th- and 19th-century French art.

“It had bling, no question about it,” Charles remembers. “She loved living with it. She was surrounded by beauty, and I loved that.” Her grandmother often gave friends tours of the 36-room house; one of her favorite spaces was the breakfast room overlooking the garden, with a green and crystal chandelier from Empress Catherine’s palace hanging over the table.

Charles, the down-to-earth daughter of Post’s oldest child, Adelaide, was both enthralled and intimidated by her flamboyant grandmother. “I was absolutely fascinated by her,” she says. “She was a little off-putting for me: She was so grand and she was a perfectionist. You were afraid you were going to stumble sometimes.”

When Charles was a young debutante, Post would try to jazz up her party outfits. “Dearie, you need some jewelry,” she told her, offering up diamonds or emeralds. At 17 years old, Charles says the thought of going to a ball wearing the stones “was horrifying. Not the cost of it, just the size of it.” She would pretend to consider the options and always select the most discreet piece – a three-strand pearl bracelet with a diamond clasp.

Post’s perfectionism and showmanship had a goal: After a decade throwing fabulous parties in the house, Post decided she wanted her collections to become a museum. She negotiated an agreement in 1968 for the Smithsonian Institution to take over Hillwood, although Post lived there until her death in 1973.

But three years later, the Smithsonian concluded that the $10 million endowment that was part of the deal – generating about $450,000 a year in income – wasn’t enough to operate the estate as a public museum. Charles believes her grandmother did that on purpose. “She said to me, ‘Now dear, that’s not going to be enough to run this property.’?” Post, who wanted her objects displayed as part of the country’s collection but still have some family control, thought the Smithsonian would ask for more money from Post’s larger trust, giving her descendants a say in the future of the museum.

Post’s plan backfired, and the house, which the Smithsonian had not yet launched as a museum, was transferred back to the family foundation.

So in 1977, with Charles’s mother at the helm, Hillwood quietly and reluctantly opened its doors. “There are a number of wealthy people who do not really want people to know they have money, and Mother falls into that rank,” says Charles. That meant operating Hillwood as an exclusive, well-kept secret for friends and other art lovers. The house was open four days a week by appointment only (requests required to be in writing) with no more than 25 people.

Charles took over for her mother in 1989, after her aunt, actress Dina Merrill, declined. She was treading into “delicate territory”: Hillwood had essentially been running like a little family boutique, not a traditional museum. The board met once a year; each one of the almost dozen members was compensated with $100,000 to donate to the charity of his or her choice. “It was a lovely board to be on,” Charles says with a grin.

She redirected the money to fix the leaky roof and take care of other deferred maintenance, projects that Charles intended to oversee and then step aside. “OK, Grandma,” she remembers telling herself. “I’m going to fix the roof, but then I’m outta here.”

Not so fast. Charles felt that she should uphold Post’s vision of sharing the collection and presenting it a professional way, and she quickly realized that Hillwood needed an experienced museum director, despite opposition from the board. Charles found Fred Fisher, working at a house museum in New York, and the two embarked on a two-decade mission to transform Hillwood.

Fisher, who came to serve as the museum’s executive director, argued that the estate housed “a big chunk of another nation’s heritage” and should not be treated as a hidden enclave or a roadside attraction. Curators were recruited to research and publish articles in respected art journals. In 1997, Hillwood closed for a three-year, $9 million renovation to bring the property up to the standards of other museums – including moving the boilers across the road so an explosion wouldn’t destroy the collections. While the museum was closed, more than 180 of its best pieces toured eight museums across the country.

The other big change? Fundraising to increase Hillwood’s profile and allow it to operate in the black every year, without dipping into its $200 million endowment. Four years ago, Kate Markert replaced Fisher and launched two tourist-friendly exhibitions each year, including one on Post’s weddings and another on her luxury entertaining. Attendance is up to about 70,000 visitors a year.

And now, it’s in good enough shape that Charles feels she can step aside.

“It’s a big change for Hillwood, and probably a good one,” Fisher said. “Institutions have to move along. Ellen has righted the ship, and it’s ready to sail.”

The last public hurrah for the board president is the opening of “Cartier: Marjorie Merriweather Post’s Dazzling Gems.” The exhibition, which opened June 7, features several of the jaw-dropping jewels she refused to wear as a debutante, along with pieces from other family members and some that Post donated to the Smithsonian.

Charles says she has been trying to resign for years and finally convinced the board that someone else could do the job. None of her three children, or any other family members, wanted to step in, so longtime board member Nancy Appleby will take over at the end of the year.

Why leave now? “Because I’m still at the top of my game,” she says with a laugh. Hillwood is doing just fine, thanks to a dedicated staff. And it’s better to go before they ask you to go, and besides, she says, it’s not healthy to have the same board president for 25 years. “You need new blood.”

She’ll keep busy with her dogs (champions shown at Westminster) and her thoroughbred horses. Charles will serve on the board, but now she doesn’t have to go to every committee meeting.

“I’ll do it because it interests me and I want to know what’s going on,” she says. “But if I have a dog show or a horse race to go to, I can do it. Just the illusion that you can is sometimes all you need.” 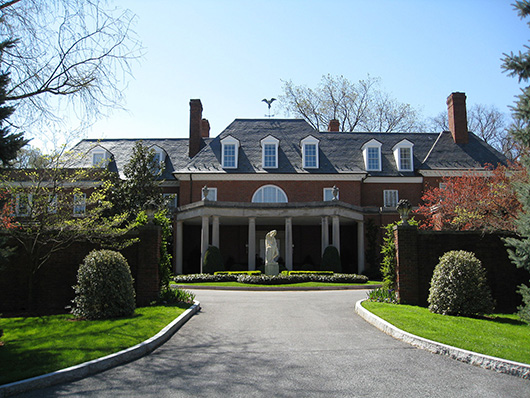 Hillwood Estate, Museum and Gardens, located at 4155 Linnean Avenue, NW Washington, DC. The estate is the former home and garden of Marjorie Merriweather Post. The house, originally known as Arbremont, was designed by John Deibert in 1926. Image by Jllm06, courtesy of Wikimedia Commons.