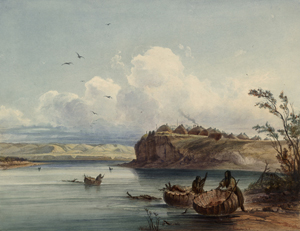 PIERRE, S.D. (AP) – Sometimes during high water the Missouri River will carve away one of its banks like an old man turning out his pockets to bring things to light—scrapers and knives made of Knife River flint, hoes and squash knives made of bison bone, 19th century toy horses made of pewter or cast iron.

And U.S. Army Corps of Engineers staff archaeologists are there afterward to pick up the pieces, or at least to assess what’s been uncovered, the Capital Journal reported.

Richard Harnois, the senior field archaeologist for the U.S. Army Corps of Engineers/Omaha District’s Oahe Project Office, said he and field archaeologist Megan Maier work in an area from about Yankton to Bismarck, N.D. Though they might be called on for archaeological expertise anywhere in South Dakota, much of their work is along the Missouri River.

But their main job isn’t the relentless search for artifacts that people associate with archaeology, Harnois said, and the river’s habit of uncovering things can be a problem sometimes. The U.S. Army Corps of Engineers simply doesn’t have the funds to do a systematic investigation every time the river turns over something interesting.

“We still have a problem with erosion along the river. It does give us a window into what’s there archaeologically,” Harnois said. “But our main objective isn’t the scientific inquiry, but trying to preserve this for the people.”

The main technique the U.S. Army Corps of Engineers uses to guard fragile locations, Harnois said, is placing rip-rap or armor along cutbacks or locations that are suffering erosion. In areas where water levels are stable, the Corps can also use willow plantings, but the wide fluctuations in the Missouri River reservoirs rule out plantings in some locations.

One thing that’s certain: The Missouri River valley is one of the more interesting features archaeologically in the region, Harnois and Maier say, for the same reason that it’s a recreational focus to this day.

“People now gravitate to the same areas for the same reasons that people for millennia have gravitated toward those areas—shade, shelter, resources,” Harnois said. “It provided a source of food and water. That’s the basis for prehistoric habitation is a water source.”

In addition, a river was an avenue of transport.

Harnois, whose special area of interest is historic archaeology, or delving into the past for which written records exist, said it’s well-known that the Missouri was the highway for fur trappers and traders to move goods up and down the river. But he said archaeological work suggests prehistoric trade was already bringing goods from far and wide to sites up and down the Missouri.

“The Missouri was the I-90 of prehistoric times. They moved up and down it,” Harnois said.

Archaeologists know that because of the variety of materials from which projectile points and other tools are made.

A favorite was Knife River flint, quarried in ancient times in what is now North Dakota.

“It’s definitely a preferred material. It was very highly sought after,” Harnois said. And, he adds, it was probably a medium of trade. “I would imagine some of the materials we see from other areas are probably the result of Knife River flint.”

Those other materials that might show up in the Missouri River’s prehistoric settlements include obsidian, a volcanic glass from locations such as the Yellowstone area that is rare, but not unknown in the area; Bijou Hills quartzite, from a region between Chamberlain and Platte, farther south in South Dakota; Black Hills plate chalcedony; and a material called Tongue River silicified sediment, or TRSS, found in northwest South Dakota and southwest North Dakota.

Maier adds that bone fishhooks, and squash knives and hoes made from bison bones, are also among the materials found in old villages. In some cases, she said, archaeologists have found the unfinished patterns from which ancient people were carving items such as fishhooks.

They were careful craftsmen, and among the other finds along the Missouri River are gunflints made by hand by Native Americans in historic times to equip flintlock rifles.

Sadly, Harnois said, trained archaeologists are not the only ones looking for traces of the past. Part of Corps archaeologists’ job is to protect sites from looters, and reclaim artifacts in cases where they catch looters. At the Oahe Project Office north of Pierre, for example, there are recovered pottery shards and stone tools that may originally have come from prehistoric Mandan and Arikara sites in the area.

“Our problem with this kind of artifact is that we don’t have any context. We don’t know where it came from and what other artifacts were next to it in the ground,” Harnois said. Although specialists can often tell what tribe or people group often made an artifact, and in roughly what period, much additional knowledge is lost.

“There could have been seeds or other materials that would have told us what they were eating,” Harnois said. “You can learn a lot from that context when it’s carefully excavated under controlled conditions. But when looters come and take it away, it’s just an artifact.”

Maier said historical archaeology can be just as fascinating because written records provide additional context for the artifacts that are found, as well as the people who used them. Browsing in old newspapers and other documents fills in some of the questions.

Maier adds that the historical record makes it clear that frontier trading posts on the Missouri River, though remote from civilization, were driven by a European fashion that favored beaver hats for a time. That, in turn, speeded up the process of settling the Missouri River country.

“It’s interesting to think how that market accelerated the process,” Maier said. “And it’s all in the name of fashion.”

This summer, the archaeologists of the Oahe Project Office, working with assistant state archaeologist Michael Fosha and volunteers—including a troop of fourth- and fifth-grade students—to delve into a site that may be the old Fort Galpin in what is now Stanley County.

Fort Galpin was a site briefly occupied by the American Fur Company in 1856 and 1857 after the company sold the nearby Fort Pierre Chouteau to the military. Traders stayed at the fort for only a year while completing the second Fort Pierre.

Though archaeologists can’t say beyond a shadow of a doubt that what they found was Fort Galpin, they found plenty of signs of activity from that 19th century fur trade period—fragments of a kaolin clay tobacco pipe, bits of brick and mortar, flat glass, bottle glass, glass beads made for trade with Native American tribes, and lots of square nails.

Whether or not it’s the historic Fort Galpin, it’s all evidence of the central South Dakota’s importance in the fur trade era, Harnois said. 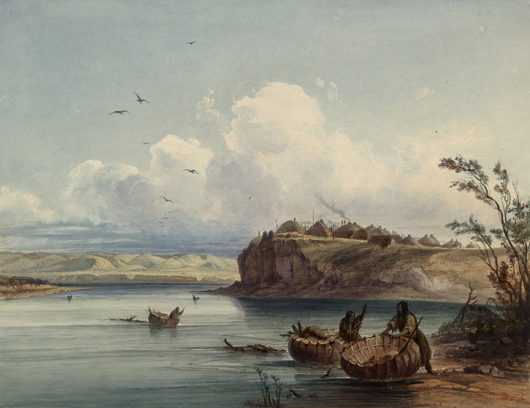