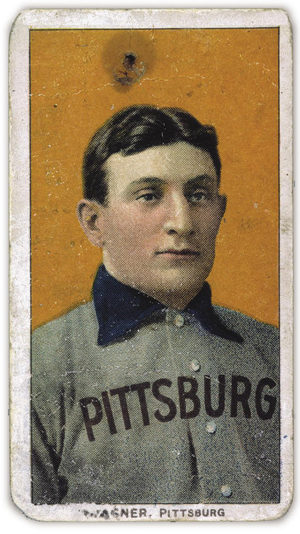 The rare T206 Honus Wagner, published 1909–1911, wasn’t within the Pittsburgh card find. Photograph by the National Baseball Hall of Fame and Museum, courtesy of Wikimedia Commons.

PITTSBURGH (AP) – The collection of old baseball cards fell from the rafters in a cloud of soot.

They were in bad shape, some so blackened that I could not tell the player’s team, let alone his name. Others, though, were clear, including Hall-of-Famers Ty Cobb, Christy Mathewson, Walter Johnson and Tris Speaker.

“I’ll take that,” I said to the group of friends who had volunteered their Saturday last summer to help me tear down and replace a ceiling in what was to become my then-unborn son’s bedroom. “These could be valuable.”

I was right: They are valuable. Only not in the way I anticipated.

First, some history: My Troy Hill house is old. Built in 1890, it sways even in modest breezes and will forever be in a state of repair.

But because of its age, it provides countless little treasures, such as the old-fashioned transoms above each door, and the hidden stairway connecting the kitchen to a back bedroom. While tearing water-stained walls out of the attic, I found old Pittsburgh Press clippings. While digging around in the backyard, I found a tombstone. (It did not come with a body, thankfully. After contacting the family, we were told that Barbara Tremel was buried in Reserve Township. They could not explain the duplicate tombstone, but were glad to take it off our hands.)

So, finding baseball cards stashed away in the rafters was hardly a surprise. Indeed, other items were hiding that day in the ceiling, including a World War I doughboy helmet, a cast-iron skillet and waffle iron, a small, wooden table with folding legs, two porcelain wheels and a wooden picture of Mary holding Jesus.

But the baseball cards really caught my attention.

First, I needed to identify them.

Craig Britcher, project coordinator and curatorial assistant at the Western Pennsylvania Sports Museum, identified the cards as 1909 to 1911 T206s, or “White Borders.” The tobacco-series editions were the most popular and mass-produced cards of the day, and now are famous for its rare Honus Wagner card, one of which sold for $2.1 million at auction last year.

Honus Wagner was missing from my collection, but that did not dampen Britcher’s enthusiasm.

“Cool piece!” he replied via email. “Very displayable if it can be cleaned up.”

The cards were glued to a wooden frame. They surrounded a blank spot in the middle. The collection’s centerpiece, it seems, could not survive untold decades in my rafters.

“The real question is: What was in the middle?” Britcher wondered. “I’m thinking it was a portrait? Maybe of the collector? … I keep thinking about this kid, getting these cards and placing them into his frame. It’s a great find.”

Next, I tried to determine value.

Some of the cards in my collection sold in online auctions for tens of thousands of dollars, but only in mint condition.

Still hoping I’d stumbled upon a windfall, I brought them to the Senator John Heinz History Center’s annual “Hidden Treasures” event, where hundreds of people like me bring items discovered in attics and basements to find out from experts whether they are treasure or trash. (This year’s event is set for Aug. 17.)

A baseball card expert looked at my collection and shook his head sadly.

Nice cards, he said, but they’re in truly awful shape. Not only are they covered in soot, they’re glued down, he explained. You could try to remove them, but the process could destroy the cards, and then you’d be left with nothing.

Art conservator Patty West loved the piece and was confident she could, at least, clean them.

“After all,” she said, “the way these cards are presented, with the frame and the detail, it is a piece of art.”

A month after dropping them off at her Allison Park studio, I returned – my 5-month-old son asleep from the drive – to pick them up.

They were beautiful. The soot was gone. Tears were fixed. Corners that once peeled from the frame were re-attached. Well worth the $217 fee.

Today, they hang on my son’s bedroom wall.

I don’t know how they wound up stashed away next to a military helmet and a waffle iron. And I wonder what other treasures these walls hide.

After all, such finds are not rare given Pittsburgh’s stock of old houses, museum officials say. Some of the items are valuable. Others – like the baseball cards – are not.

That’s fine with me. We settled for something more: a little piece of history that doubles as art.

Like Britcher, West wondered about the missing centerpiece, a space waiting to be filled. In her treatment report, she wrote: “Recommend client photograph son, perhaps in baseball outfit, and print in sepia tone.”

An excellent idea. And I look forward to the day when I can share with my son the story behind the old cards hanging on his bedroom wall. I imagine him taking the frame down to study the old uniforms and the ancient faces, men who played in an era when our great city briefly dropped the ‘h’ and tried “Pittsburg” on for size.

He’ll know that these cards aren’t worth much money.

But maybe he’ll see, as I do, how something worth less than you’d hoped can become too valuable to sell. 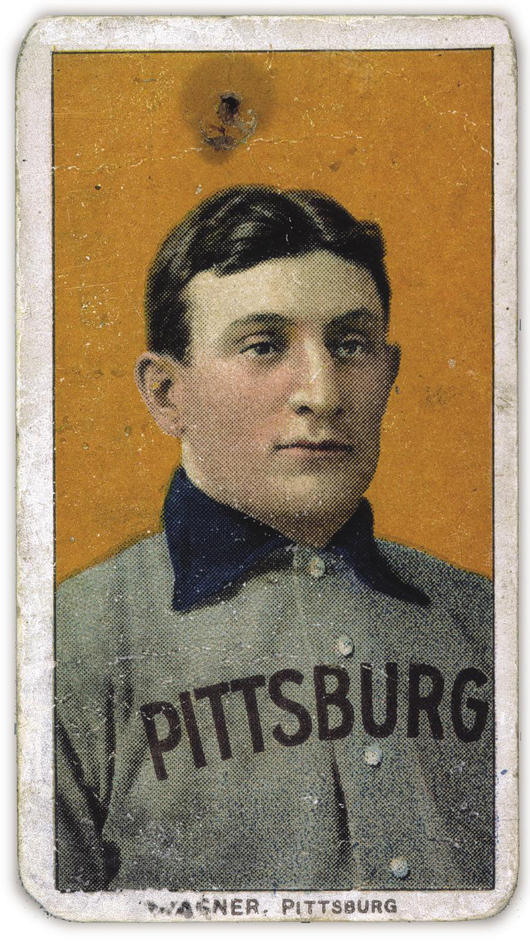 The rare T206 Honus Wagner, published 1909–1911, wasn’t within the Pittsburgh card find. Photograph by the National Baseball Hall of Fame and Museum, courtesy of Wikimedia Commons.