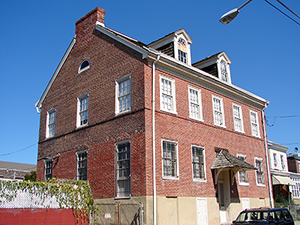 The John Ruan House, a historic mansion in Philadelphia, houses the Grand Army of the Republic Civil War Museum and Library. Image by Smallbones, courtesy of Wikimedia Commons.

PHILADELPHIA (AP) – Philadelphians were clearly tired of the Civil War in the days leading up to the invasion.

To escape, some attended the stage adaptation of Uncle Tom’s Cabin at the Continental Theatre; others took in the play Peep O’Day at the New Chestnut Street Theatre or caught a concert by Birgfeld’s popular German military band in Fairmount Park.

But when they picked up The Inquirer on Monday, June 29, 1863, there was no getting away from the war. The Confederate army was on their doorstep. The front page carried a map showing “THE INVASION OF PENNSYLVANIA” along with stories describing the threat to the state capital of Harrisburg—and to Philadelphia.

“TO ARMS! CITIZENS OF PENNSYLVANIA!! The Rebels Are Upon Us!” the headlines said in bold type.

As tens of thousands gather at Gettysburg this summer to watch and re-create the battle fought 150 years ago, area exhibits, monuments, and historic sites are reminding Philadelphians of a traumatic time that left its mark on the city.

“Gettysburg was a battle that was so close to us and our homes,” said Sharon Smith, president of the Civil War Museum of Philadelphia, which has been seeking a new home. “The connection between the Civil War and Philadelphia is powerful and strong—and we can still see it today. The city is a living monument to the war.”

In nearly every neighborhood—from sprawling Laurel Hill Cemetery in East Falls, where Gettysburg’s victorious Union Gen. George Gordon Meade is buried, to monuments near Memorial Hall in Fairmount Park—are the vestiges of a bygone age, when the city joined a crusade to save the Union.

About 90,000 Philadelphians were on the enlistment rolls during the war. That number includes reenlistments but not African American soldiers, whose numbers were unknown.

“After Washington, the Northern city most impacted by the war was Philadelphia,” said Andy Waskie, historian and Temple University professor who wrote Philadelphia and the Civil War – Arsenal of the Union. “It was the most important center of the war effort, and if it had been removed from the Union, it would have been a tremendous loss.”

In the collection of the Grand Army of the Republic Civil War Museum and Library in the city’s Frankford section is a recruiting poster calling on citizens in June 1863 to enlist and rally in defense of the city.

Then-Mayor Alexander Henry told the populace to “close your manufacturies, work-shops and stores before the stern necessity of common safety makes it obligatory. Assemble yourself forthwith for organization and drill.”

At the Heritage Center of the Union League is a public exhibit displaying a flag that flew over the Philadelphia Brigade at Gettysburg during the Confederates’ attack known as Pickett’s Charge, and the podium President Abraham Lincoln later used to give the Gettysburg Address.

And at the Historical Society of Pennsylvania is a large collection of papers and personal correspondence of Gen. Meade along with other Civil War records, newspapers, and images.

For Philadelphians in 1863, “there was no way of avoiding the war,” said Andrew Coldren, historian and administrator curator of the Salem County Historical Society and consultant for the Civil War Museum of Philadelphia. “Troops and supplies moved through the city all the time.”

Units from “New England states came in by train and stopped here,” Coldren said. “When they left (by rail or ship), they were stepping off into war.”

Tens of thousands of weary troops took advantage of the city’s so-called refreshment saloons that provided food, drinks, and company. There were large halls on Washington Avenue near Swanson Street and on what was Otsego Street south of Washington.

Today, the buildings are gone, but the hospitality shown in them is remembered in books such as Philadelphia in the Civil War, which was published by the city in 1913.

“Dear Parents,” wrote one soldier in 1863, “I will endeavor to give you a faint description of our reception in Philadelphia, but I know that my pen cannot half do justice to the subject. . . . Anyone who thinks there is any lack of support for the war has only to march through Philadelphia.”

During the Pennsylvania invasion, the city “was the first and only major Northern city that was physically threatened,” Coldren said. “The fear people felt was real.”

For Southern Gen. Robert E. Lee, Philadelphia would have been a plum. It was a financial, political, naval, shipping and rail hub with a strong military tradition and the two largest hospitals in the North, Satterlee in West Philadelphia and Mower in Chestnut Hill.

In the summer of 1863, the City of Brotherly Love also looked like an armed camp.

“A Confederate cavalry raider was captured on the outskirts of the city,” said Waskie, president of the General Meade Society, who has portrayed Meade as a reenactor. “He was asked why he was there, and he said he kind of wanted to see the big city.”

Anxious crowds gathered outside newspaper offices near Chestnut and Third Streets to read headlines posted on bulletin boards and wait for papers to come off the presses.

After two days of desperate fighting in Gettysburg, the stage was set for the climactic attack—winner take all. With bayonets fixed and the Stars and Bars fluttering overhead, 12,000 battle-hardened Confederates charged across an open field toward a copse of trees on Cemetery Ridge in Gettysburg on July 3.

Among the Union soldiers awaiting them was Gen. Alexander Webb’s Philadelphia Brigade, which helped repulse the Southern onslaught. He and Brig. Gen. John Gibbon, a native of Philadelphia’s Holmesburg section, were both wounded—and later honored by bronze statues on the battlefield.

After the fight, city residents heaved a sigh of relief, and Meade—the victorious general—expressed his joy to his wife, Margaretta. “It was a grand battle and is in my judgment a most decided victory, tho I did not annihilate or bag the Confederate Army,” the general wrote in a July 5, 1863, letter in the collection of the Historical Society of Pennsylvania.

“This morning they retired in great haste into the mountains leaving their dead unburied and their wounded on the field,” he said. “They waited one day, expecting that, flushed with success, I would attack them when they would play their old game of shooting us from behind breastworks—a we played this time to their entire satisfaction.”

Meade told his wife “the men behaved splendidly—I really think they are becoming soldiers – They endured long marches . . . and stood one of the most terrific cannonades I ever witnessed.”

His horse “Baldy was shot again & I heard will not get over it,” wrote Meade, who would later see him recover and carry him on rides through Fairmount Park, where the two are portrayed in bronze behind Memorial Hall.

The general was so popular that a thankful Philadelphia gave him a house at 1836 Delancey Place, where he died in 1872. Meade’s name remains in large letters over the door of the brick corner property, which has been converted into apartments.

Inside the Union League’s Heritage Center are a carte de visite image, oil painting and engraving of Meade along with a table, rocking chair and chair from a two-room farmhouse where the general held his council of war at Gettysburg before the third day of the battle.

The exhibit, called “Philadelphia 1863: Turning the Tide,” also includes an empty coffin intended for Union Brig. Gen. Gabriel R. Paul, who was believed to have been mortally wounded—shot through both eyes—and listed as deceased at Gettysburg.

His son, a Union captain, came with the coffin to collect the remains when he learned his father had survived, said James Mundy Jr., director of library and historical collections at the League.

Farther north, at the Grand Army of the Republic Museum and Library, is the preserved head of Meade’s horse, Old Baldy, and memorabilia of enlisted men and officers, including a cannonball embedded in a tree trunk, a pair of handcuffs belonging to presidential assassin John Wilkes Booth, and a bloodstained strip of fabric from a pillowcase on which the dying Lincoln rested his head.

After Gettysburg, many wounded Union soldiers were brought back to Philadelphia hospitals. At least 157,000 would be treated in the city during the war.

To help pay for their care, the U.S. Sanitary Commission held a Great Central Fair at what is now Logan Circle, next to the Cathedral Basilica of SS. Peter and Paul, where more than $1 million was raised in 1864.

Lincoln, accompanied by wife Mary and son Todd, visited the fair on June 16 and contributed 48 signed copies of the Emancipation Proclamation. Lincoln signed the original Jan. 1, 1863, declaring “that all persons held as slaves” within the rebellious states “are, and henceforward shall be free.”

Philadelphians next saw Lincoln at Independence Hall, where his body lay in state after his assassination in 1865. “Philadelphia had the largest free black population in the country at the time of the Civil War,” Coldren said, “and many African Americans waited in line to see the man who had such an impact on their lives and their future.” 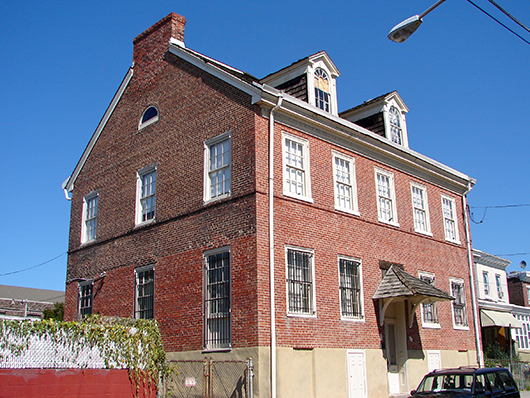 The John Ruan House, a historic mansion in Philadelphia, houses the Grand Army of the Republic Civil War Museum and Library. Image by Smallbones, courtesy of Wikimedia Commons.