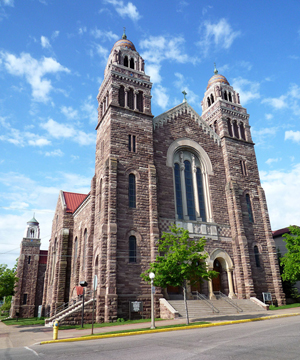 Fired gutted the 1881-90 St. Peter Cathedral in Marquette in 1935 but the sandstone walls survived and the structure was was rebuilt. Image by Bobak Ha’Eri. This file is licensed under the Creative Commons Attribution-ShareAlike 3.0 Unported license.

MARQUETTE, Mich. (AP) – Material manifestations of history can come in many forms, such as arrowheads, fossils, photographs and books.

Perhaps the most grandiose of these, tough, are the preserved – and even under-preserved – buildings that were the homes to noteworthy people and events.

Dan Truckey, director of the Beaumier Heritage Center at Northern Michigan University, recently spoke on the topic during an “Afternoons at the Museum” talk at the Michigan Iron History Museum in Negaunee Township. The heritage center also hosted a recent exhibit called “Lost and Found: Historic Structures of the Upper Peninsula.”

“We think of historic structures as buildings like the bank building on the corner, but things such as railroad trestles are historical structures as well,” Truckey said. “And when they tore down that trestle, Marquette was kind of split between people who are like, ‘Oh, thank God they finally tore down that ugly trestle in Marquette’ and other people who were really upset about it, because they felt like we’d lost a part of our history in Marquette, and also just the sense of place, which is really what this is about.”

At the same, he said Marquette has done a great deal to save its downtown in the last decade, which has been a benefit to the community.

However, that hasn’t always been the case, said Marquette historian Jim Koski.

“Actually, at one time Marquette did not do a very good job of preserving its buildings because from probably 1965 to 1975 – I haven’t counted the exact number – somewhere between 15 and 20 sandstone buildings were torn down in the name of urban renewal, either for parking lots or for big, anonymous glass buildings,” Koski said.

Koski called this the “great sandstone purge” because people didn’t have an appreciation for the “old” material.

“Thankfully, that stopped,” he said. “Now everyone is striving very hard to save all the sandstone buildings.”

In fact, the preservation movement is growing as a whole, Koski said.

“I really do believe that the historic preservation movement is perhaps stronger than it’s ever been as we’re coming to realize the architectural gems that we have lying in our midst,” he said.

Koski said one of the most notable buildings is the First United Methodist Church. It was built in 1875 and it now one of the oldest major buildings in Marquette. Another old building, the former city hall built in 1894, was going to be a victim of the sandstone purge but was saved and now is an office building, he said.

Koski said the city’s sandstone buildings are a tourism draw.

“It’s one of the very few places in the country where you have a concentration of well-preserved sandstone buildings,” he said.

However, saving historical structures goes beyond the structures themselves.

“When we save historical structures, we’re saving the historical integrity of a community and creating a meaningful link to a community’s past and as I mentioned before, a sense of place,” Truckey said.

Saving historical structures also contributes to the quality of life of a community, he said, by providing a more attractive and culturally vibrant life.

Unfortunately, America over the last 50 years has been actively trying to homogenize its urban, and even suburban, landscapes, Truckey noted, although Americans more and more have the desire to live in historically preserved areas.

“Historic preservation is good for business,” he said. “Americans are leaving suburban communities in vast numbers to go to cities and rural communities that have more of a sense of place, because they’re tired of the homogenization of a culture.”

One building that adds to the local historical landscape is the Luce County Historical Museum in Newberry, located in the old combination jail and sheriff’s residence. Truckey acknowledged Victorian homes, such as this structure, have many small rooms, which makes them difficult to use as museums since they were built as homes.

“They tend to make their curators pull their hair out, but at the same time, it’s great that they’ve been saved, and they’re beautiful, important buildings that need to be saved, and they’re a big part of their community history,” he said.

That’s not to say restoring historic buildings is always easy. For one thing, Truckey pointed out they can be located on private property or the restorations come with high price tags.

Also, people can be hesitant to move a historic building from its original spot, but sometimes that location is not the best place for the structure itself, Truckey said.

“It’s not near anything, or maybe it’s going to be destroyed if it doesn’t get moved,” he said.

An example is the small Dompierre House in Michigamme. It was one of the first structures in town, but had to be moved to its current location to save it. Truckey said the home was going to be destroyed, but the Michigamme Historical Society and the community decided to restore it and move to the main street in town.

The future of the old Lower Harbor Ore Dock in Marquette is in question, although the city has ordered a feasibility study regarding the structure.

The ore dock is perhaps the iconic structure of Marquette, Koski said.

And taking it down would be like removing the lighthouse or St. Peter Cathedral, two other Marquette landmarks, he said.

The former Holy Family Orphanage at the corner of Altamont and Fisher streets in Marquette might be too far gone to be renovated, Koski acknowledged, but he expressed the hope that if the building is torn down, the porch would be preserved.

“I realize from an economic point of view that saving some old buildings just isn’t feasible, but if you can save a part of the history, I mean, at least that’s a much bigger step than turning it into rubble and dust,” Koski said.

Courthouses – typically stately structures that are the sites of many notable past legal events – also often are saved and are important parts of the community. As two examples, Truckey mentioned the Dickinson County Courthouse in Iron Mountain and the Chippewa County Courthouse in Sault Ste. Marie.

Other buildings, often with ornate architecture both inside and outside, are churches, and they too, Truckey said, are cherished within their communities.

One parish’s successful effort to save its church involved the immaculate Conception Church in Iron Mountain, he said. In the case of the former St. Anne’s Church in Calumet, the building sat empty for many years and was slated for demolition. The community decided to save it and now it is the Keweenaw Heritage Center, located in the Keweenaw National Historical Park. According to the National Park Service, the structure was built in the Gothic Revival style out of local Jacobsville sandstone.

“Someone once told me that if you ever wanted to look at the comparative prosperity of a community, look at their churches, because they’re kind of a collective effort,” Koski said, with rich and poor people alike donating to the cause.

Down the street from the Keweenaw Heritage Center is the famous Calumet Theatre, which at one time was threatened to be demolished as well, Truckey said.

In fact, Calumet has been rejuvenated in the last 20 years due to historic preservation, he said.

“I remember visiting there in the 1980s and saying, ‘This town is dead. It’s beautiful, it’s amazing what’s here, but this town is dead,’” Truckey said.

But with the combination of local resources, the historical park being designated there and a community that realized – unlike many communities in the U.P. – the mines aren’t coming back, the focus changed to preservation of the area’s amazing history and incredible structures, Truckey said.

“It’s a much more vibrant community than it was because of that,” he said. “They saved the Calumet Theatre. They wrote grants, the community raised money and now it is the point of pride in the community. It’s a beautiful place. They have productions. It’s a tourism destination.”

In fact, Truckey pointed out the entire Keweenaw area is on board with historic preservation.

“The Keweenaw County Historical Society has done an amazing job restoring the Delaware mining district area buildings,” he said. “It’s just been a huge rejuvenation and it’s been so important, and is a great example of what can be done.”

That said, Truckey stressed a community needs a sense of vision.

“We’ve seen it across the United States,” he said. “We’ve seen it all over the world. The places that save historic structures and their districts are much more prosperous and have a greater sense of place, a better quality of life and a greater connection to their past and their pride.”

Information from: The Mining Journal, http://www.miningjournal.net 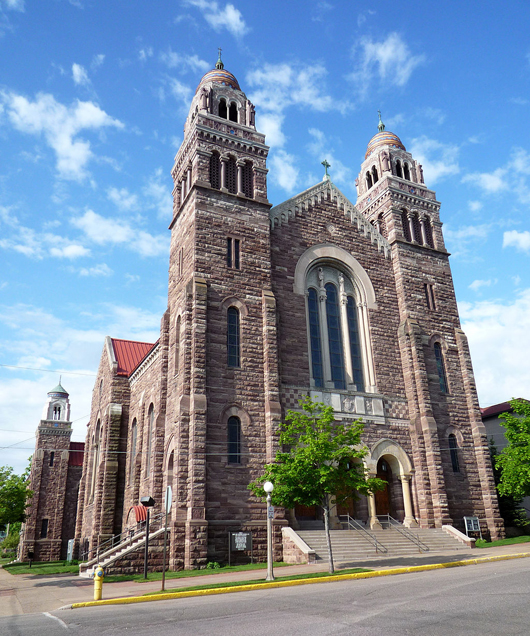 Fired gutted the 1881-90 St. Peter Cathedral in Marquette in 1935 but the sandstone walls survived and the structure was was rebuilt. Image by Bobak Ha’Eri. This file is licensed under the Creative Commons Attribution-ShareAlike 3.0 Unported license. 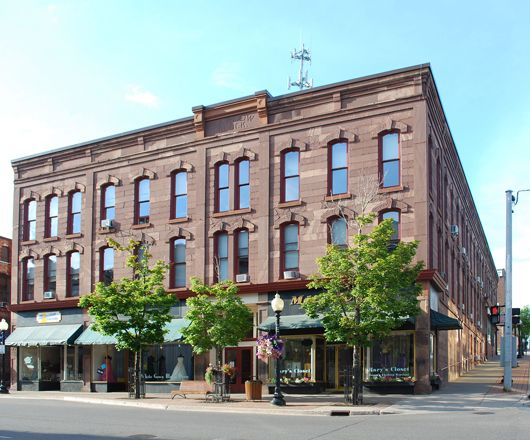 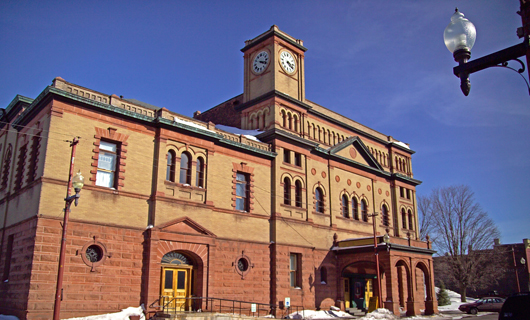 The Calumet Theatre in Calumet, Mich., was built in 1900. This historic opera house is open year-round and provides theater, music and dance. Image by Dan Johnson, courtesy of Wikimedia Commons.