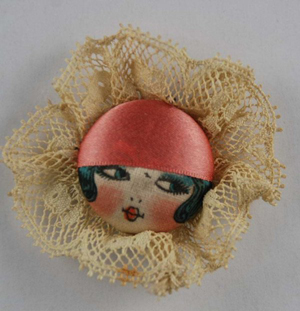 The face of a 1920s flapper adorns this vintage garter button mounted on lace. Image courtesy of LiveAuctioneers Archive and Bella Button Auctions.

SHELBYVILLE, Ill. (AP) – Mankind has long been uptight about buttons.

Once some enterprising clothier had invented the buttonhole (they appeared in 13th-century Europe) the button was sure to follow, and then people started getting obsessed with them.

Flashy, showy buttons sprouted all over the garb of medieval fashion plates, and a man’s social prowess could be judged by the magnificent extent of his gold, silver, ivory and bejeweled fastenings. It got so out of hand that church authorities feared the unraveling of the social order and sought to undo the harm by promoting “sumptuary laws” designed to criminalize excessive button frolicking.

Zipping forward in time, we find Maude Hartman living in the country south of Shelbyville with 250,000 reasons to be thankful such draconian couture constraints have gone the way of doublets and ruffs. Her home is packed with more than a quarter-million buttons, and she’s off to Urbana on Friday and Saturday for the Illinois State Button Society’s annual meeting and convention. Once there, the indefatigable button hunter hopes to add a few more treasures to her vast accumulation.

Hartman says you can come, too, and believes with evangelistic zeal that there is no finer hobby in the great sweep of the human fabric than button collecting.

“Don’t worry about buying buttons,” says Hartman, 60. “Just come to the convention to see what is going on, come to look and visit with everybody and talk to people. Talking to people is what got me going about buttons.”

And she’s so right. It’s best not to dive in too deep too soon when confronted with the infinite ocean of collectible buttons: You’ll drown.

Hartman’s own collection, for example, is awash in a riot of colors, shapes, materials, designs and button purposes. There are little stylish buttons shaped to look like a flapper’s head and designated to festoon women’s garters in the Roaring ’20s. There are buttons made by artists as collectibles shaped like Humpty Dumpty and other nursery rhyme characters.

And then there are the useful buttons, actually designed to hold our clothing together. These come in celluloid and bakelite (the 19th- and early 20th-century parents of modern plastics) as well as glass, china, fabrics, enamels, wood, bone, horn, brass and steel stretching across 150 years of fashion history.

Button shapes, however impractical, cover about anything you can think of: anchors, playing cards, ships, ice-cream cones, pieces of fruit, bees and even the intricate shape of an orchid. All of which is only just barely unbuttoning the topmost layers of this “fastenating” subject.

Some rare buttons, she adds, have prices in the hundreds or even thousands of dollars, and yet you might find them in a jar at a yard sale if you know what to look for.

A retired teacher and school librarian, her ordered mind arranges her finds on neatly filed stacks of cards, where they are grouped by type and materials into a precisely ordered hoard the Smithsonian Institution would give its eyelets for.

Hartman’s husband, Dwane, watches with a smile as his wife shows stunned visitors around the labyrinthine assemblage. He says people on the outside of the button world just have no idea how far the need for buttons can push you. “I tell someone, ‘She’s off to a button convention,’ and they say, ‘You’re kidding me.’ And I say, ‘No, I’m not.’”

Hartman started collecting seriously in 1995 and says the fascination of hunting and categorizing antique and modern buttons is a great way to knit up the raveled sleeve of care.

“Jobs like teaching can be very stressful,” says the collector, who is also a serious Harry Potter fan. ‘I had to have something to keep away the dragons (her word for buttonholing the nature of mental stress); I think we all do, don’t you?” 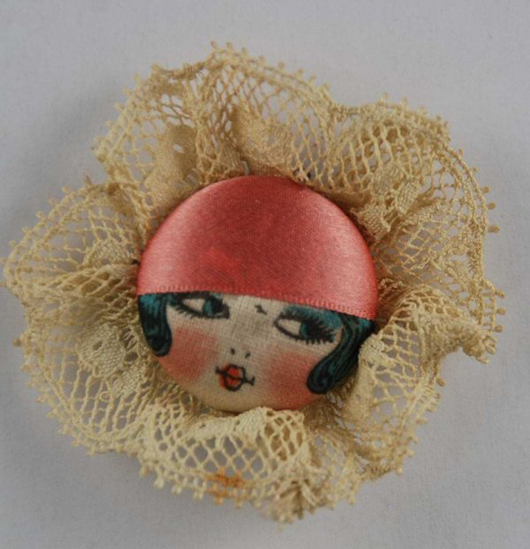 The face of a 1920s flapper adorns this vintage garter button mounted on lace. Image courtesy of LiveAuctioneers Archive and Bella Button Auctions.