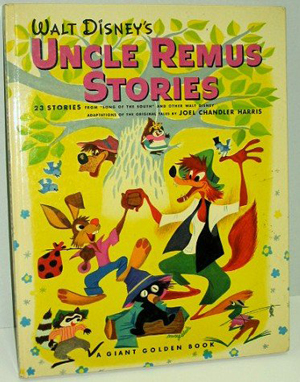 This example of Disney’s 1947 Uncle Remus Stories Giant Golden Book features many of the characters and backgrounds created for the motion picture Song of the South. Image courtesy LiveAuctioneers Archive and Premier Auction Center.

The elementary school students in the room shriek with delight as he huffs and puffs, stomping around the Wren’s Nest, the very house where newspaperman and author Joel Chandler Harris brought the mischievous characters to life based on stories he heard from slaves during the Civil War.

“I smell a rabbit!” Richardson booms in a deep bass voice for the wolf, making the children laugh.

Down the hall in an office sits Harris’ great-great-great grandson, Lain Shakespeare, a spunky 26-year-old who took over the failing museum three years ago and revived it from near closure using social networking Web sites Twitter and Facebook and a blog.

It was quite a tall order for a kid who grew up in a family that mostly shunned the museum because of its long-standing practice of not allowing blacks to visit, a policy that ended in 1984 when Shakespeare was a baby. Piled on top of that painful history is the controversy surrounding Harris’ work _ a white man profiting off stories he took from slaves and spreading what many consider to be an unflattering caricature of Southern blacks.

“It’s an uphill battle, to say the least,” Shakespeare said sitting in his Wren’s Nest office, which was once the bedroom of Harris’ mother. “We’re letting people know the full story, instead of the story that’s been told by other people. We talk about it. We don’t sweep it under the rug.”

He even poses questions on his blog like “Is Uncle Remus racist?” and invites readers to respond honestly. In one post, he wrote of a Girl Scout leader who wanted to bring her racially diverse troop to visit Wren’s Nest, but was “met with dead silence” when she suggested the field trip to parents.

That friction and controversy is exactly what Shakespeare hopes will bring visitors to the front door of the mustard-colored home with the stained glass windows in Atlanta’s mostly black southwest neighborhood. That, and fond childhood memories of hearing stories about Uncle Remus and the Tar Baby in the briar patch.

So far, the strategy seems to be working.

He’s tripled the number of annual visitors to about 15,000 in just three years. The Facebook page has more than 500 members, and nearly 400 people follow the museum’s Twitter feed.

Shakespeare raised enough money when he first took over in 2006 to get the museum out of the $113,000 of debt owed to 19 creditors. Since then, he and his staff of three have raised enough to complete $190,000 in restoration and repairs to the aging house, which is named for the wrens that nested in the mailbox while Harris lived there.

“Before we were this sleepy little house museum on the wrong side of town,” Shakespeare said, smiling. “But now people know who we are.”

Inside the house is a charming collection of Uncle Remus and Brer Rabbit memorabilia nestled among the original furniture and rugs that were in the house when Harris died in 1908. Book shelves are full of first editions of Harris’ 185 Uncle Remus tales, which have been translated into more than 40 languages.

In one corner hovers a stuffed owl given to the Harrises by President Theodore Roosevelt, who was a fan of the Uncle Remus stories and befriended the shy Harris, inviting him to the White House. In another room are two dummies donated to the museum by Walt Disney in 1946 after the movie Song of the South was released based on the Uncle Remus stories.

Harris’ bedroom is the only room in the house that hasn’t been restored, following a rule set in place when the museum opened in 1913 that the room be left largely untouched. His hat and glasses sit on a table in the corner next to his typewriter.

Harris was born in Eatonton, Georgia, in 1845, though for years he was thought to be three years younger because he lied about his age to avoid fighting in the Civil War. He dropped out of school at age 17 to work near his hometown on Turnwold Plantation, where he met the slaves that would spark his love for African-American folklore and the tradition of storytelling among Southern blacks.

He also learned the newspaper business at the plantation, setting type and writing for “The Countryman,” one of the largest circulation papers in the Confederacy during the war.

Harris worked for a handful of newspapers across the South after the war before settling at the Atlanta Constitution, where he was associated editor for nearly 25 years. It was there he first began writing his Uncle Remus stories, which were released in 1880 in book Uncle Remus: His Songs and Sayings.

The stories were an instant hit, capturing readers across the globe. The tales were the first in American literature to give human characteristics to animals and were unique because of the heavy dialect in which Harris penned the tales. Harris is also credited with revolutionizing children’s literature, which had never before seen anything like Brer Rabbit and Brer Terrapin.

Still, black authors like Toni Morrison and Alice Walker – who was born in Harris’ hometown of Eatonton – have denounced the author and say he stole the stories unjustly. And other plantations, like the Laura Plantation near New Orleans, say that the stories started there and that Harris simply adapted them, showing the deep roots these stories had in Southern folklore.

For Curtis Richardson, who is one of several regular storytellers who perform at the Wren’s Nest, being black in a museum that celebrates such a controversial body of work can be tough. Richardson said he refused to tell Harris’ version of Tar Baby stories until he researched their roots back to West Africa and the Caribbean. Now he tells the older versions as a way to honor the stories’ heritage and skip the modern associations with racism.

“It had connotations of black folks being slow,” Richardson said standing on the porch of the Wren’s Nest on a recent rainy afternoon. But the older African stories are “easier to tell, and I can live with it then.”

Painting purchased in shop worth many times asking price