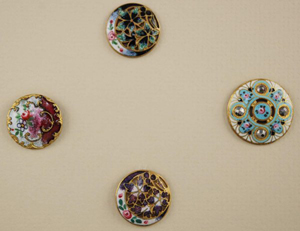 These antique enameled buttons are pierced and embellished with cut steel. The lot of four sold for $40 at a button auction in March. Photo courtesy Bella Button Auctions and LiveAuctioneers archive.

For a certain kind of crafter, nothing pushes their buttons like, well, buttons.

And among button collectors, vintage buttons appear to be a favorite find. While a few button stores still exist – Tender Buttons in New York City is notable – the Internet now provides a plethora of online stores for button shopping.

Still, many button aficionados prefer the hunt: chasing down buttons the old-fashioned way – at flea markets and garage sales.

“Most of the people who know me know that if there’s a scent of buttons in the air, I will follow it,” said Carol Schneider, a publishing executive in New York City.

In her spare time, Schneider crafts scarves, children’s wear, and purses from old kimonos and vintage fabric. Her handmade goods often require accenting, which is where the perfect button comes in.

“That’s one of the most pleasurable parts of (my designs). It’s the cherry on top of the ice cream sundae,” said Schneider. “It’s the last part of the project.”

Schneider keeps to the lower-cost vintage buttons, scouring East Coast flea markets and visiting shops like Tender Buttons. “The fun of it for me is going somewhere and not caring if it’s a valuable, old button or if I just love it,” she said.

On the other coast, Carol Cienna sells buttons online when she’s not working the parking entrance at the Los Angeles Dodgers’ home baseball games. She’s been at it about a dozen years, and she knows buttons: antique, vintage and new.

Dealers generally agree that antique buttons are those made before 1917, when more buttons began to be mass-produced, Cienna says. Those that date after 1917 are considered vintage up to about 20 years ago – but this is hotly debated. Some dealers think vintage needs to be older than 20 years, while others maintain that construction and quality decide the classification, Cienna said.

Most new buttons are of an entirely different quality, and nearly all are plastic or glass.

“If you sit them side by side you’ll see the difference,” she said.

Vintage buttons can be difficult to date, she said.

Cathie Filian uses a lot of buttons in the crafts she shares on her DIY Network show, Creative Juice. Her fondness for buttons began as a child when older relatives would give them to her by the handful. Women such as Filian’s grandmother would clip beautiful buttons from worn-out garments and store them in metal tins or glass jars, much to the elation of crafters and collectors who find them at garage sales today.

“That preservation nature … we have so many fabulous buttons with us today as a result,” Filian said.

Both Cienna and Filian caution against using a vintage button in a way that would destroy its integrity.

“Think about crafts that don’t have to be glued, so they can be reused,” said Filian.

Some suggestions: in a bridal bouquet, mixed with new buttons, as the toggle on a purse, added to dishtowels or quilts, or sewn into a shadow box for displaying. Filian also suggests clipping boring buttons off a new sweater and sewing on vintage ones.

“They just don’t make the buttons the way they used to,” she said. “Vintage buttons have such grace and elegance and spunky humor … they were shaped like tools, or animals. They were button mad.”

Cienna thinks vintage buttons are cheaper than the newer imitations sold in fabric stores. She recommends snooping among the dealers’ “poke boxes” at button shows; these jumbles of buttons usually sell for $1 apiece.

“You graduate very quickly in button collecting,” Cienna said. “At first you’re happy with bags of cheap buttons, but pretty soon the rare ones catch your eye … before you know it, a collector is specializing.”

Y’all invited to Dukes of Hazzard reunion in Ga.