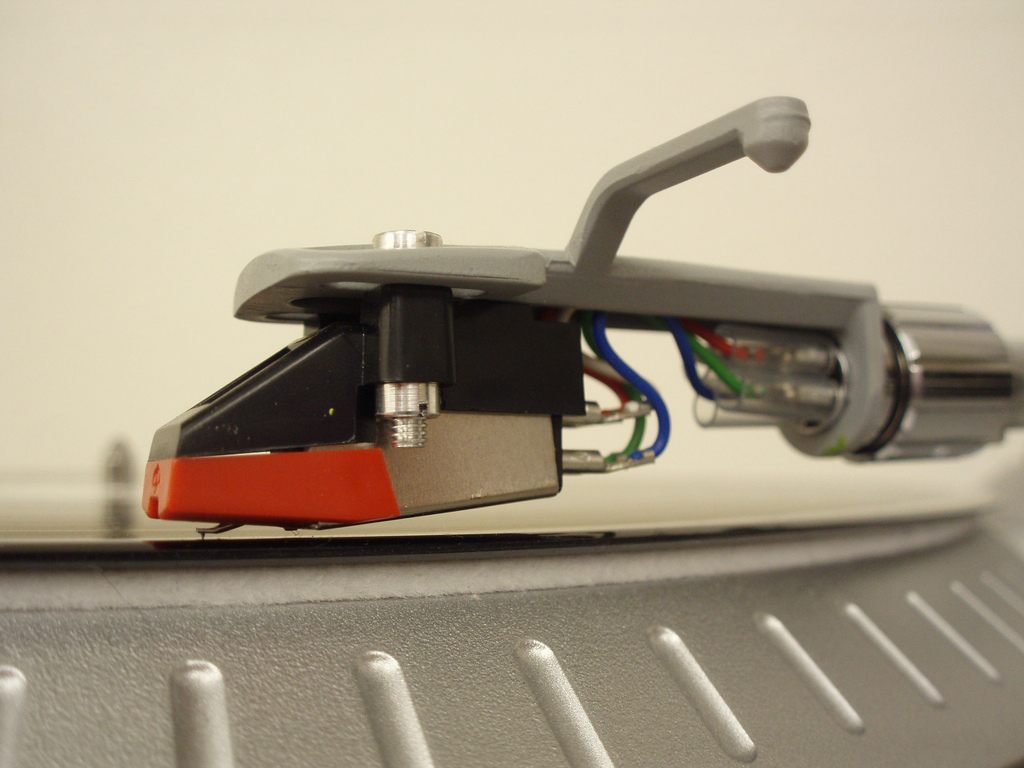 Close-up shot of a turntable cartridge and needle resting on a vinyl record. Image by Michelle Hawkins-Thiel. This file is licensed under the Creative Commons Attribution 2.0 Generic license.

COLLINSVILLE, Ill. (AP) – A new music shop in Collinsville is just for the records.

Mark Cartier’s business combines his love for music and its vinyl form. His Rich’s Record Emporium at 121 W. Main St. has about 3,000 new and used albums for those, like him, who prefer and continue to listen to vinyl albums from years ago over the more modern digital versions. About 70 percent are new and remastered and 30 percent are original or “collectible” albums.

“Records have always been there,” Cartier said. “I think a lot of people like me have never given up on vinyl because we sit there and listen to a vinyl recording.”

The Collinsville record store sells mostly newly made albums of music that is both new releases and oldies, as well as vinyl records that were new decades ago. Cartier, an Air Force veteran who was once stationed at Scott Air Force Base, said new vinyl albums that have recently come onto the market are thicker and more durable than their predecessors.

“I’ve been collecting vinyl for years, but in the late ’80s and early ’90s, most of vinyl were flimsy or just poor quality and the sleeves were just thin cardboard,” he said. “It seems that most of the companies that are doing it now are really good. The artwork is back, just like the ’70s, the record sleeves are thicker, they are using this heavier gauge. It is better and high quality.”

Rich Faigle, the store’s namesake, has been running the place since it opened for business last November. Cartier currently lives in upstate New York and plans to move to the metro-east later this year. Faigle is a 30-year retiree of Greyhound bus lines who went on to be a manager at the former Hi-Fi Fo-Fum home audio systems store in Fairview Heights and other stores within the St. Louis-based chain.

Faigle also worked for Cartier, who operated his own home audio business, Audio By Us, in Belleville from 1995 to 2002. As a self-professed “music and equipment junkie,” Faigle was only too happy to come out of retirement to work at a record store in his hometown. The Collinsville-native said the reception has been strong, especially among young consumers.

“We’re getting the young kids, the college kids and the high school kids,” Faigle said. “I had a young girl in here last week who was 11 years old and with her parents buying her first two albums for her vinyl collection. The college kids are also coming in here, and I’m also seeing a lot of older guys in their 50s and 60s who are rebuying their old vinyl records that they listened to years and years ago that they wore out.”

Cartier said the resurgence in records comes from those who have either never listened to a vinyl record and those who never stopped. He said both recognize and realize a better and more unique sound from the old-style recordings.

“A lot of what we’re seeing is not just the old timers like me, but the millennials,” he said, referring to those born between the early 1980s and 2000s. “The millennials have had digital, which they are going to continue to do because downloading is convenient and essentially the modern version of the Walkman, that’s not going to go away. But when they listen to it, they too realize that vinyl is just very dynamic. Even if there’s surface noise, life has surface noise. If you go to a live venue, there’s all kinds of noise. These people that swear that if I’m going to take the time to listen to music, it has to be live, well there’s usually a lot of noise in those venues. Listening to vinyl provides that experience.”

Lew Prince has also witnessed the recent resurgence surrounding records. Prince operated a vinyl record shop in Granite City for 17 years before closing his store in 2007. He still operates his Vintage Vinyl across the river in University City, Mo., which he opened in 1980. He opened his first record store in Soulard in 1979. He said sales began to fall when digital formats evolved in the 1990s. In recent years, he has seen more customers seeking vinyl, because they have realized that music coming from their MP3 players “sound like crap.”

“I really think what I’m seeing in general is kids in college and people up to their mid-30s were seeking out vinyl,” Prince said. “Customers were going digital in ’90s, early 2000s. Now we’re seeing the reverse happen.”

And more competition also sounds good to him.

“Good for them,” Prince said. “Our thought has always been the more, the merrier.”

In Fairview Heights, a music store assistant manager named Abbey Rhodes, who works at Slackers CDs and Games in Fairview Heights, believes vinyl has never gone out of style and has been gaining in popularity. Rhodes said vinyl appeals to her customers who are nostalgic or simply appreciate the art of the album cover.

Vinyl sales have been moving up the music industry charts. According to Nielsen’s 2014 U.S. Music Report, vinyl LP sales totaled 9.2 million and increased by 52 percent last year. More than 10 times as many CDs were sold during 2014, but that was down by almost 15 percent compared to 2013.

“The music industry is very money-oriented,” Cartier said. “If they don’t see a market, they don’t go in that direction. We have actually seen a decline in CDs and an uptick in vinyl. The new artists and artists, who are very young or are getting started that you see on the Grammys, are actually going out of their way to produce music on vinyl.”

Faigle said he sells remastered vinyl records, including the Beatles’ The White Album and Sgt. Pepper’s Lonely Hearts Club Band. But they have to be purchased from a company in London, because it is the only business that distributes new vinyl albums of past recordings.

Because Rich’s Records Emporium sells records, the store also has record players. But these are not used or thrift consoles from generations ago. The turntables and sound systems sold at Rich’s are high-end and some are custom made – ranging in price from $250 to $1,200.

Faigle said he has sold eight record players since opening four months ago. A newly released Bryan Adams album recently sold for $6 at the Collinsville record shop while new records from Bob Dylan and Bruce Springstein have sold for $40. Faigle believes he and Cartier have scored a hit with records. Most of the people who come into Rich’s, including those who end up buying records, say they have never owned a vinyl album. “We get at least two to three people that way every day,” Faigle said. “It has been slowly and steadily increasing.”

Information from: The Pantagraph, http://www.pantagraph.com