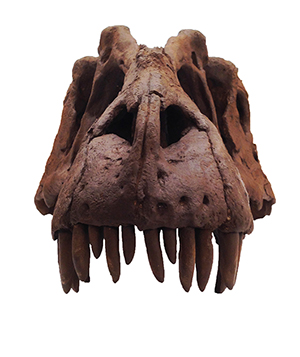 The skull of a lythronax, a recently discovered species of tyranosaur, which lived during the late Cretaceous Period, 95-70 million years ago. Copyright 2012, Natural HIstory Museum of Utah.

Those two qualities, combined with fine attention to detail and a little detective work, make her the perfect volunteer for the Natural History Museum of Utah’s paleontology department.

“I worked for 30 years behind a desk and when I retired, I said no more,” Bonnell said while whisking away layers of dirt deposited in an ancient pond 300 million years ago in a remote location just outside what is now Canyonlands National Park. “The experience of finding your first fossil is indescribable.”

Paleontologists come from around the world to a Utah landscape rich with bones of ancient creatures, but not everybody doing the digging, cleaning the fossils and even making the discoveries has a fancy title in front of their name.

“We have amazing volunteers. They discover fossils, they excavate fossils and back in the lab they prep them out,” said Carrie Levitt, paleontology collections manager at the Utah museum. “We would not be able to do the work we do as paleontologists without the volunteers.”

As a kid, Erin Finney loved visiting the museum in San Francisco’s Golden Gate Park. He was particularly fascinated with the dinosaurs. So it is no surprise Finney ended up being the one who kids visiting the Natural History Museum of Utah now dream of becoming when they grow up.

“What kid doesn’t love fossils?” said Finney, a seasoned volunteer in both the prep lab and on field trips with the museum’s paleontology department.

Last year while scouting possible dig sites in San Juan County, Finney found an important discovery on a steep slope: several fish fossils. With so many fossils in the same area the team refocused its efforts like crime scene detectives.

Their efforts paid off when what appears to be the snout of a phytosaur – a crocodile-like creature – was discovered sticking out of the cliff.

On the same trip Finney stumbled upon half of a limb bone of a hadrosaur, a duckbill dinosaur. He then spent hours looking for, and eventually finding, the other half of the bone.

“I didn’t know exactly what it was at the time, but I knew it was good,” he said.

The Beehive State provides a plethora of fossils and is well known among paleontologists.

“Utah is the best place in North America to find fossils of almost any age,” Randy Irmis, paleontology curator at the Natural History Museum of Utah.

Sometimes finding dinosaurs only requires paying a little bit of attention while exploring Utah. But taking them home is against the law. People who discover fossils on public lands should report their findings to the BLM or a museum, said ReBecca Hunt-Foster, a Utah Canyon Country District paleontologist for the Bureau of Land Management.

The Natural History Museum of Utah collects fossils from public lands, but don’t own them.

“They hold them for everyone; they belong to us as Americans,” she said.

Discoveries don’t only happen in tucked away locations. Fossils found in the field are collected – in many cases, wrapped in a plaster cast still surrounded by dirt and rock called matrix – and sent to the museum.

In the prep lab, volunteers and museum staffers wear lab coats and use dental tools such as drills and picks to clean off the fossilized bones.

Bonnell started as a gallery interpreter at the Natural History Museum of Utah, earned her way into the lab.

“We slowly take the layers of matrix down and you start seeing little bits of bone,” Bonnell said. “It’s an awakening process. All of a sudden you have this fossil. There is some sort of connection you can’t describe, but it is there.”

Finney, who has spent the last nine months working on the same ichthyosaur skull, admits the lab work can be tedious, but he also likens it to art.

“I look at it like subtractive sculpture,” he said. “They say rock will dictate the sculpture. In the case of fossil prep it is quite literally what the bone will look like when you take the matrix off of it.”

Finney says getting a new plaster cast is like “getting a Christmas present that takes a really long time to open.”

Finney and Bonnell both like to take breaks from the lab and walk around the museum. They are constantly rewarded by seeing young people, and those not so young, staring at the bones of ancient animals they helped reconstruct.

Visitors will notice little plastic replicas of dinosaurs resting on or near many of the items being worked on in the prep lab. It’s a way of reminding the volunteers about the unique animal they are working to reveal.

It is a custom Finney has incorporated on a shelf at his home.

“Every time I work on a different taxon of different species I buy a plastic toy of that genus,” he said. “So far I have seven little plastic dinosaur toys. Hopefully, I will add an eighth sometime soon.” 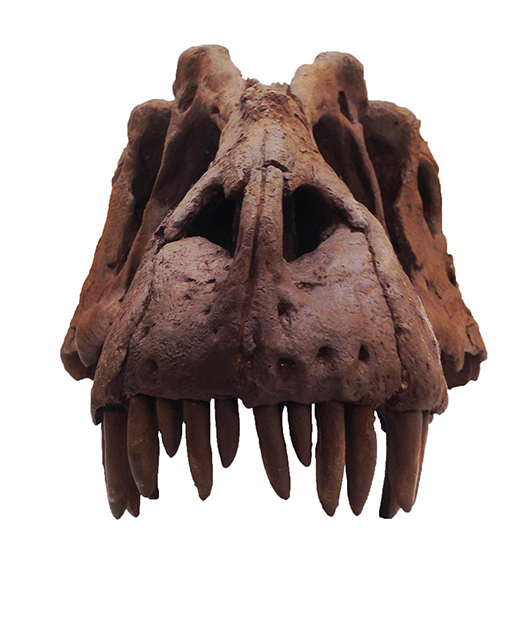 The skull of a lythronax, a recently discovered species of tyranosaur, which lived during the late Cretaceous Period, 95-70 million years ago. Copyright 2012, Natural HIstory Museum of Utah.

Jeffrey S. Evans presents round 2 of miniature lamps May 31