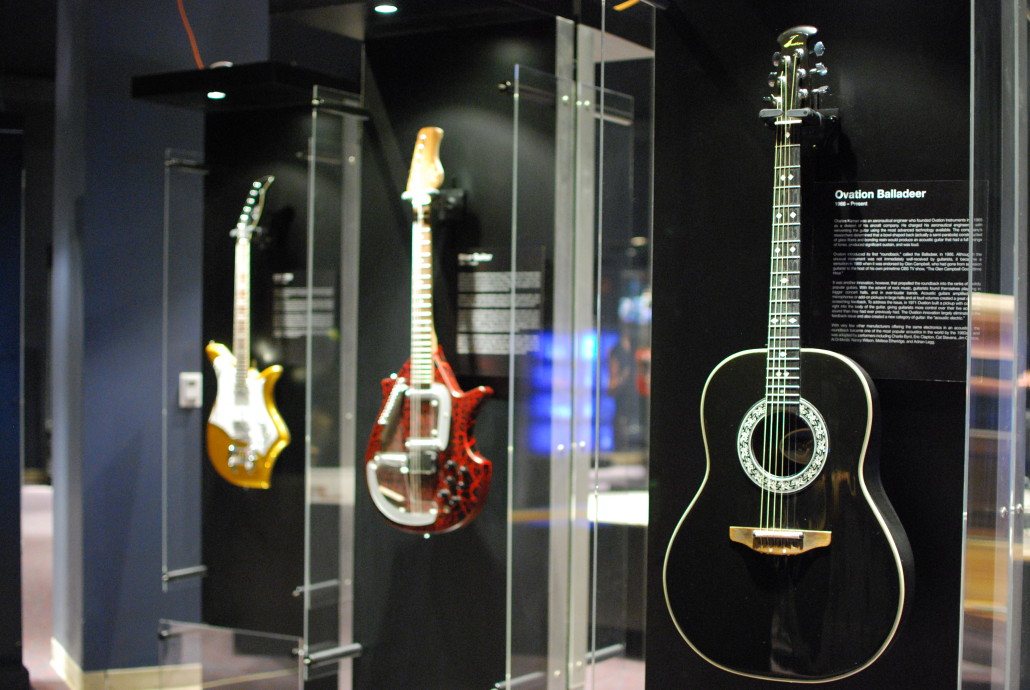 Visitors can examine more than 100 historical artifacts, including nearly 60 guitars, with ‘Guitar: The Instrument That Rocked the World,’ a new national traveling exhibit at Exploration Place, Jan. 30 – May 8. Image courtesy Exploration Place.

But no other musical instrument is as versatile, as storied and as widely popular as the guitar – at least according to the legions who strum, pick and shred it.

“There is no music, no style of music, that the guitar is not used in,” said Wichita guitar expert Kevin Brown. “Show me the heavy-metal oboist or a country piccolo player. They didn’t build a video game around a piano.

“It’s not that those instruments are bad. They’re wonderful. But the guitar – you can literally do anything with it.”

The Wichita Eagle reports that the guitar and its many uses is the subject of two exhibits at two Wichita museums. Exploration Place will have a national traveling exhibit called “Guitar: The Instrument That Rocked the World.” And the Wichita-Sedgwick County Historical Museum is opening “The Electric Guitar: Wichita’s Instrument,” an exhibit of valuable vintage guitars inspired by one-time Wichita bandleader Gage Brewer’s 1932 Ro-Pat-In Electro Spanish guitar, said to be the first modern electric guitar. That instrument, first strummed in a Wichita club on Halloween 1932, resides at the museum.

Both exhibits are scheduled to run through May 8, and both museums have scheduled months’ worth of guitar-related activities to accompany them.

Wichita is a good place for the dual exhibits, local guitar experts say, because Wichita is a particularly guitar-friendly town. In addition to claiming that historic electric guitar, Wichita is home to a long list of legendary players. Some are still local. Some have made it big. Among the many names on that list are famous jazz guitarist Jerry Hahn; Jim Hill, the revered left-handed guitar player in Lotus; Randy Zellers, an accomplished player who teaches at Friends University; jazz guitarist Steve Poorman; and Robert White, a sought-after local guitar teacher.

The list also includes Brown, whose reputation as a lead guitarist and teacher is matched only by his abilities as a guitar repairman, an occupation he perfected after a music store ruined his 1957 Gibson Gold Top Les Paul.

“It made me swear to my mom and my friends I’d never let anyone touch my guitars again,” he said.

People love guitars, said Exploration Place’s director of marketing Christina Bluml, a fact proven to her as she has put together the museum’s guitar-related activities in conjunction with the exhibit – activities that include concerts, jam sessions, even a “Guitar Hero” competition.

The instrument has a universal appeal, and most people have had an experience with one, whether strumming it themselves or admiring the skills of others. Guitar players have long been among the country’s most revered musicians: from Elvis Presley to Eric Clapton to Eddie Van Halen. And every musical genre can claim its own guitar superstars, from jazz to rock to country to classical to folk.

Not to mention the instant sex appeal a guitar affords an on-stage performer. See: The Beatles.

“People can just relate to it,” Bluml said. “And they have all kinds of memories, whether it’s a song they liked or they were in a band. It’s just such a relatable instrument.”

Kevin Brown is 60, but when he first picked up a guitar, he was 7. His uncle gave him a cheap acoustic, and Brown immediately felt connected to it. When he was 10, his mom took him to a local record store and told the man behind the counter to give her the 10 best guitar albums he had. She didn’t care what style.

One of them was John Mayall and the Blues Breakers with Eric Clapton, a 1966 album commonly known to music fans as the “Beano” album, a title inspired by the British children’s comic Clapton is reading in the cover photo.

“When the needle dropped on Eric Clapton’s first song, Hideaway, I remember running out of the room and telling my mom that’s what I wanted to do, and she said OK,” Brown said.

His mom, a church secretary, supported his dream, Brown said. She even coerced the church janitor, who also worked at the Cotillion, to sneak 11-year-old Kevin into the back door of the Yardbirds’ 1967 concert there. She waited in the car outside. By the time he was 13, Brown was getting paid to play at sock hops, dances and proms.

Through his adulthood, Brown played in a long list of bands, including a gospel group called Covenant whose album broke the top 100 on the gospel charts in 1975. He also was the lead guitarist in rock bands with names like Relayer, Image and finally Haze, a popular local band in the 1990s.

The guitar has always been a centerpiece of his life, Brown said. He’s owned and sold dozens of guitars over the years, some of which – like his 1959 Sunburst Les Paul – could pay off all his bills if he’d kept them. He named his sons Eric and Jeff after his favorite guitarists, Clapton and Jeff Beck. His dog is named Riff. His e-mail address starts with GuitarGod4.

Brown had to stop his repair work job because of back trouble. But he still plays the guitar every day, for at least an hour.

The guitar’s portability and accessibility are what make it so great, Brown theorizes. Guitars can be easily hauled to campfires and hayrides, and they’re easy to learn.

What he really loves are guitars that are also artifacts. Cale, director of the Wichita-Sedgwick County Historical Museum, has made studying vintage guitars his pet project during his tenure at the museum. His exhaustive research resulted in Wichita being able to make the claim that the Gage Brewer guitar, found locally at an estate sale, was used in the oldest documented performance of an electric guitar. The instrument is even listed in a book of 150 most important guitars ever made.

When Gage Brewer plugged in an electric guitar at the Shadowland Ballroom in Wichita in October of 1932, it was the first time an electric guitar was played before an audience. Three of Brewer’s first electric guitars are part of an upcoming exhibit about the instrument at the Wichita/Sedgwick County Historical Museum.

The guitar is safe behind glass in the museum, but Cale wants everyone to know it’s there. When musician Neil Young was in Wichita working on his electric car in 2008, Cale invited him to come inspect the guitar, which Young did, marveling over its lack of volume control.

When the Eagles last visited Wichita in 2013, Cale got special permission from the guitar’s anonymous owners to take it to Intrust Bank Arena and show it to guitarist Joe Walsh, a Wichita native, who played a few chords on it.

Over the past several weeks, Cale has been traveling around the country collecting valuable vintage guitars for the museum’s exhibit, which will include about 50 instruments made from 1870 to 1950. He flew to Los Angeles to pick up a rare 1949 Bigsby guitar, one of only about 25 like it ever made, that was once owned by Ernest Tubb’s guitar player.

He then drove to Salt Lake City to collect a Gibson model ES-150 once owned by jazz aficionado Charlie Christian, the guitarist for Benny Goodman’s orchestra, and a rare 1932 Rickenbacker frying pan guitar. The guitars are so rare and valuable, Cale had to agree to drive the 17 hours back to Wichita with the instruments because their owners don’t allow them on planes. He also had to agree not to stop anywhere overnight, and he does not touch them without gloves on.

Joe Walsh, guitarist for the Eagles, agreed to loan a guitar to the Wichita-Sedgwick County Historical Museum for an upcoming exhibit on the history of the electric guitar.

Cale’s exhibit, just the latest on a list of guitar exhibits he’s put together over the years, will include 20 guitars borrowed from local collectors (including one loaned by Walsh), plus a section of instruments produced from 1870 until 1932 and another with instruments made from 1933 to 1950. The exhibit will conclude with a three-day symposium May 6-8 featuring several of the world’s leading guitar scholars, including authors Walter Carter and Lynn Wheelwright.

Cale plays, too, though he insists it’s only on his couch behind closed doors. Guitars can go anywhere, he said, and that’s why they’re so popular.

“I think for a lot of people, it is an instrument that’s very expressive,” he said. “And it’s very accessible. It’s not expensive like a piano would be, and it’s very portable.”

Cale and the museum’s famous electric guitar were part of the reason Exploration Place directors thought the traveling guitar exhibit, put together by the National Guitar Museum, might play well in Wichita, Bluml said, and directors were inspired to ask the historical museum to partner with them. Exploration Place’s exhibit includes more than 60 different guitars, from some of the earliest stringed instruments to the guitars played today. It examines the evolution of the guitar and the science of how they work, and it includes several interactive pieces.

Exploration Place also has put together a series of adults-only Thursday-night guitar concerts through March, April and May, as well as two bluegrass jams to enhance the exhibit.

“Wichita is such a great music town with so many amazing local bands and that rich history of the first electric guitar being used here,” Bluml said. “That’s huge, and it seemed like we needed to do something beyond just the regular ‘Here’s the new exhibit.’”
___

By DENISE NEIL, The Wichita Eagle