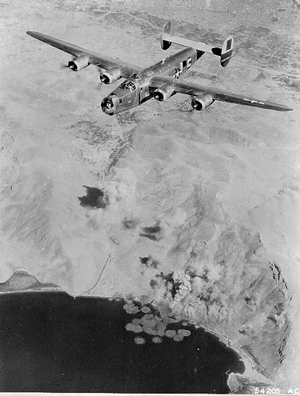 B-24 of the 464th Bomb Group on a bomb run. Image courtesy of Wikimedia Commons.

ALLEN, Texas (AP) – This is a tale of love and war, of heroism and survival—and of sheer luck.

For more than six decades, a scrapbook that 2nd Lt. John M. “Jack” Bridges composed when he was a POW in World War II gathered dust in Europe.

They’d only heard Bridges, a Collin County resident who died more than six years ago, casually mention over the years that he’d chronicled his imprisonment at Stalag Luft III—the German prisoner-of-war camp made famous in the 1963 Steve McQueen film The Great Escape.

“He mentioned that he had kept a record of things that had happened, but he didn’t mention that it was in notebook form,” said Edna Bridges, 89, his wife of 61 years. “I thought he’d just jotted down notes here and there.”

And were it not for an inquisitive journalist, the story might have ended there. But in the summer of 2010, a British reporter came across Jack Bridges’ notebook at an auction house.

The reporter tracked down Bridges’ relatives in their native Alabama. They contacted Bridges’ son, John Bridges III, an independent computer contractor who lives in Allen.

The reporter “started sending me pictures” of the vivid sketches and illustrations of POW camp life depicted in the book, said Bridges, 51.

Bridges said he tried to buy the book for the original asking price, which was about $2,500. But the book’s undisclosed new owner, who reportedly found the historical gem at an estate sale, politely declined.

It is no mystery how it wound up in the hands of a profiteer.

His dad’s B-24 bomber, Stardust, was struck by German shells and burst into flames over Hungary on May 10, 1944.

Ten days later, Jack Bridges was taken to Stalag Luft III, where he stayed until Jan. 27, 1945, when he and other POWS were abruptly moved as Allied forces approached. He was finally liberated on April 29.

Bridges’ notebook—issued to POWs by the YMCA so they could chronicle their experiences—“got left behind,” said his son.

“They were told an hour before the Allies—the Russians—came in to grab all they could and march,” Bridges said. “You grab clothes, food but that (scrapbook) is not something you’re going to grab.”

A Polish navigator found the book in the abandoned barracks, and he held on to it for decades. “And somehow,” Bridges said, “it ended up in an attic in an estate sale in England.”

Bridges said he and his family feel fortunate to have discovered the book, which has dozens of pages of illustrations and cartoons that provide a glimpse of what life was like inside the camp.

He said his dad—who studied architecture at Auburn University and enjoyed a career in that field after the war—had a distinctive style that his family recognizes. But some of the drawings, he said, may have been the handiwork of other POWs.

“I’m still of the belief that not all of it is my dad’s,” said Bridges. “But there were pieces in there that I could see was him.”

On the first page, Jack Bridges paints himself as a disgruntled duck coming into the camp with his tail afire after being shot down: “I wanted wings,” reads the caption.

Another drawing, signed by Jack Bridges and dated “11-44,” or November 1944, shows footprints running from the barracks where POWS stayed to a nearby outhouse, and the caption reads: “Winter Sports at Sagan.”

“It shows he had a sense of humor,” said Edna Bridges, giggling at the drawing.

But there were more serious sketches, too. One of his wife’s favorites is an illustration of a memorial honoring 50 servicemen killed by the Gestapo.

Another depicts Bridges bailing out of his B-24. It reads, “Le Coup de Grace.”

“He had a fertile imagination, I tell you,” his wife said.

As she thumbs through the pages of her husband’s scrapbook, Edna Bridges gets a better sense of what he endured.

That was at a friend’s Saturday night dinner party celebrating Bridges’ return.

“The next day he called and wanted a date, and I told him I had to go to church,” Edna Bridges said. “And he said, ‘That’s OK, I’ll go with you.’ I said he must be a nice guy if he’ll go to church.”

And so he was. They married five months later, she said.

During their marriage—from October 1945 until December 2006, when Bridges died at the Lucas home where they’d lived since 1973—the couple seldom talked about his POW days.

“After he gave a talk at our church” in Alabama, Edna Bridges said, “he didn’t talk about it anymore until we went to a reunion of POWs about five or six years after we married. And we went to every reunion from then on.”

She said his book, which she ultimately hopes to leave to the 464th Bombardment Group, is a precious keepsake. She still can’t believe it found its way to her.

“It was just unreal,” she said. “I was so happy to hold something he had done.”

John Bridges said “there’s a whole crew of people who have parents or relatives with books” or other remembrances from WWII. But there’s only one that belonged to his dad.

“That was the only thing that I could really give back to my mom that was my dad’s,” he said. “And when I put it in her hands—wow—it was worth every penny.” 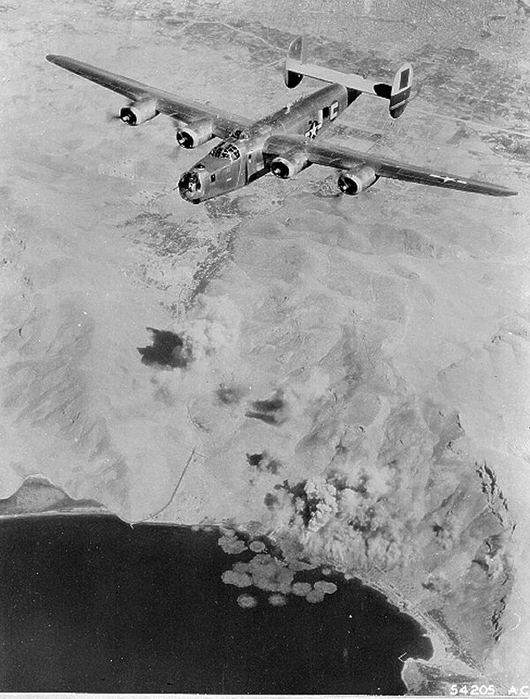 B-24 of the 464th Bomb Group on a bomb run. Image courtesy of Wikimedia Commons.