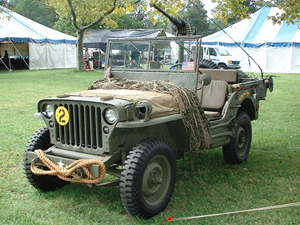 A Willys MB, better known as a jeep, at a military vehicle show in Virginia in 2006. Image by Mytwocents. This file is licensed under the Creative Commons Attribution-Share Alike 3.0 Unported license.

TOLEDO, Ohio (AP) – After spending the last seven decades in Italy, a World War II-era jeep returned home to Toledo last week, 70 years to the day after it rolled off the production line.

Vittorio Argento, an Italian radio journalist and military vehicle enthusiast, shipped the carefully restored vehicle across the Atlantic Ocean, then drove it from New Jersey to Toledo, where he parked in the shadow of a Willys-Overland smokestack—the only remaining part of the factory complex that built about 650,000 of the famous military vehicles during World War II.

The exact military service of Argento’s jeep is lost to time, though he said it was shipped to Europe in 1943 and could have been used by American troops during the Allied invasion of Sicily in July, 1943. Though it can’t be proven, he believes it saw combat duty.

When the GIs came home from Italy, the jeep stayed behind. It was drafted into the service of the Italian army and later found its way to civilian life when a geologist purchased it as army surplus. Argento has owned it since 1984.

Through the years, he has restored it as closely as possible to its original condition. Argento guessed 95 percent of the parts on the jeep are original. The canvas top and thin cushions that pad the hard metal seats are reproductions, but he has the originals safely packed away.

The idea for a homecoming hit Argento a couple of years ago. While working on the vehicle, he noticed the date stamped into the Willys data plate affixed to the dash: 6-3-43. Realizing the jeep was nearing its 70th birthday, he thought, “Why not?”

Why not return to where it was built?

It took about three weeks to ship the jeep from Florence, Italy, to Newark. From there, Argento put in five days of driving to reach Toledo.

Though the jeep is capable of topping out at about 60 miles per hour, Argento gives an amused head shake that says “absolutely not” to the prospect of going that fast. He said about 45 miles per hour is a good speed. All for the best, he joked, as it stops when it wants to, not when you hit the brakes.

Though the original factory was razed in 2006, the reclaimed industrial ground—rutted, rocky, and muddy–is perfect to quickly show off the jeep’s abilities.

As Argento eased his foot off the clutch, the jeep crawled forward. It squeaked and rattled. Its gears whined loudly. The engine ran smoothly but sounded far more like a farm tractor than a car. And Argento couldn’t have look happier as he guided the jeep across the uneven terrain.

In Italy, and across Europe, many people still remember the jeep as a vehicle that helped bring an end to the war.

Argento relayed a story told to him years ago by a man who worked as a mechanic before World War II. During the war, he lived in the mountains south of Florence. One day the man heard a roar outside his home. Along with other onlookers, he saw a strange car coming up the steep slope.

“If they can invent a car able to come up from that slope, for sure they will win the war,” Argento remembered the man saying.

The jeep—officially known as the Willys MB—was like nothing anyone had ever seen. The other tools of war—tanks, cannons, rifles, and soldiers—were common sights. But the jeep was new and made a lasting impression. Even today, many people call any four-wheel drive, off-road ready vehicle a jeep, he said.

“Everybody recalls the jeep with pleasure, regardless that the jeep was linked to something bad like war,” he said.

Argento was met in Toledo by media, representatives from the city, and the Lucas County Port Authority, which owns the old Jeep site. He accepted small gifts of appreciation from Toledo Mayor Mike Bell and from Jim Tuschman, representing the Port Authority board of directors.

The Port Authority recently announced both the first new tenant for the 111-acre site, as well as groundbreaking on a new road.

“This marks the beginning of what we hope will be a fantastic economic development project for Toledo that will take place right here,” Tuschman said. “Keep an eye on this site, you’re going to see some very exciting things happen as the Overland project will take its place in Toledo’s history as a rebirth of an economic development asset for the community.”

Like any collectible, a restored jeep is worth what someone’s willing to pay. But Argento said a model like his typically would sell in the range of $15,000 to $20,000.

His will return to Italy, though he’s not driving it back. A truck will pick up the vehicle and transport it back to New Jersey for the trip home.

Argento will drive something else back: A Toledo-built Jeep Wrangler. 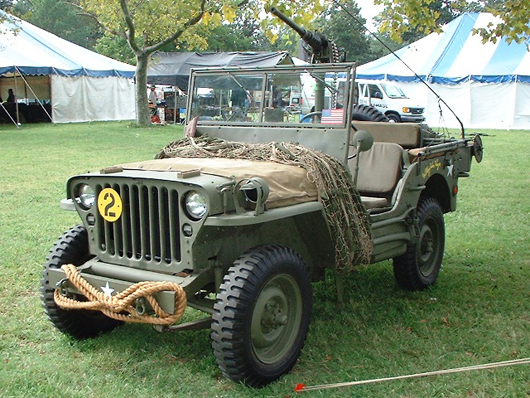 A Willys MB, better known as a jeep, at a military vehicle show in Virginia in 2006. Image by Mytwocents. This file is licensed under the Creative Commons Attribution-Share Alike 3.0 Unported license. 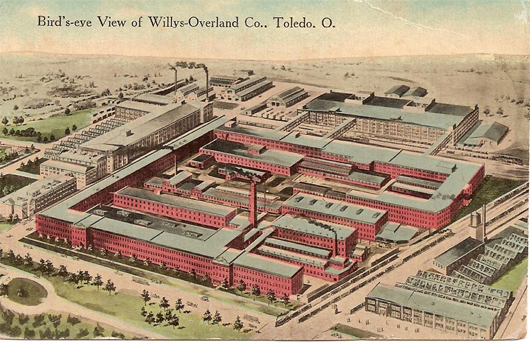 A postcard pictures the Willys-Overland Co. factory in Toledo, Ohio, circa 1915. Army jeeps were built there. Image courtesy of Wikimedia Commons.