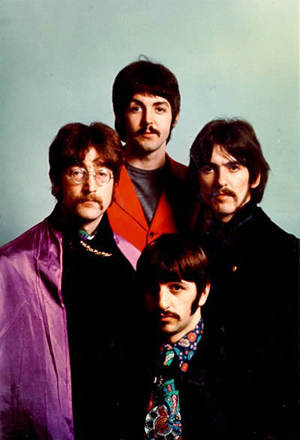 The Beatles, circa 1968. Image courtesy LiveAuctioneers.com and RoGallery.com.

NEW HAVEN, Conn. (AP) – Scott Freiman asks his students to “lend me your ears” and he takes them on a trip through Strawberry Fields, down Penny Lane and into Abbey Road.

Using contemporary computers, vintage video and antique audio, Freiman hopes to teach Yale students some history along with music production techniques and, above all, “inspire their creativity.”

The class, which spans two hours over 13 Wednesday afternoons, is “The Beatles in the Studio.”

It comes as the world celebrates the 50th anniversary of the Fab Four’s first released recording. That was Oct. 5, 1962, in England when Love Me Do and its flip side of P.S. I Love You came out on 45 rpm vinyl. Two years later, it found its way onto U.S. shores.

Freiman, a 51-year-old composer, engineer and music producer who graduated from Yale in 1984 with a B.S. in music and computer science, landed the classroom gig following an hour-long multimedia presentation for school officials and students in January.

His plans are to take his students on a “Magical Mystery Tour” of the Beatles, tracing their origins by looking at who influenced them during their musical evolution in songwriting and production techniques, then showing who they influenced before ending with their break-up and initial solo albums.

“So its pretty comprehensive,” Freiman said during an interview prior to his Oct. 3 class. “There’s a lot of material to get through and far too little time.”

This unconventional class at an Ivy League school is not unusual, according to George Levesque, Yale’s assistant dean of academic affairs. He said they’ve been part of the college seminar program’s curriculum for 45 years.

Freiman has three years of experience producing Beatles multimedia presentations and lectures, which he’s shown across the country in schools and theaters and to corporate gatherings. But the first took place in his living room before some 40 friends.

A fifth, deconstructing the early Beatles, is in the works.

In these multimedia presentations, Freiman explains the techniques and equipment used by the group, explores the background behind a song and discusses choices made and rejected in completing a record.

He said his class is more technical-oriented since the students have had a year of music theory and play an instrument.

“They must also work,” he said.

Just this past Wednesday, they had to submit a five-to-10-page paper analyzing a Beatles song released between 1962-65 in terms of harmony, rhythm, production and lyrics. The paper also had to discuss the context in which the song was written.

“I play a lot of interesting music and rare tracks,” Freiman said. “Also, the students are listening to non-Beatles music outside of class – Jimi Hendrix, the Beach Boys, the Byrds … ”

For instance, he said McCartney’s infatuation with Hendrix led to his including a chord sequence from Hendrix’s Hey Joe into A Day in the Life.

The influences involved more than just other groups’ works.

“One of the things I do in the classroom and in my talks is I play the Chuck Berry version and then I play Back in the U.S.S.R. It’s very funny to hear how Paul mimicked Berry’s lyrics for the Soviet Union.”

And who but a Beatles junkie like Freiman would know that an original line in With a Little Help From My Friends was “What would you do if I sang out of tune? Would you throw tomatoes at me?”

Freiman said Ringo was afraid the band would get pelted with tomatoes when that line was sung, so he asked Lennon and McCartney to change it. It became “Would you stand up and walk out on me?”

But above all, Freiman hopes to show through his class that the Beatles were “four guys who didn’t read music, had no musical training and they became, especially Lennon and McCartney, a Rogers and Hammerstein – a major songwriting force in popular music. How do you do that when you have no real background? … It’s real interesting so see how that all evolves.” 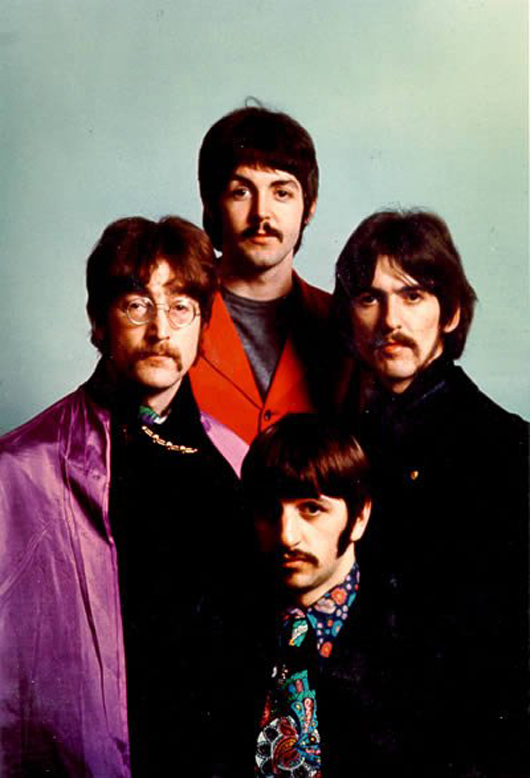 The Beatles, circa 1968. Image courtesy LiveAuctioneers.com and RoGallery.com.