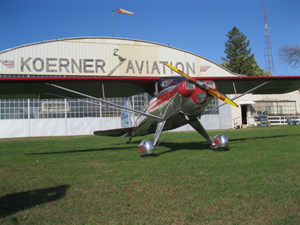 The Luscombe 8C Silvaire, with its polished aluminum skin, looks as spectacular as it did when the plane was built in 1941. Koerner Aviation image.

KANKAKEE, Ill. (AP) – A tale involving aeronautical history and mechanical ingenuity might be expected at the Kankakee airfield that is home to the 86-year-old Koerner Aviation business.

It’s also predictable that the central characters in that story would be ancestors of the aviation pioneers who first brought flying machines to this area.

In the latest story unfolding these days, 24-year-old Alex Koerner is getting noticed – along with his newly restored Luscombe 8C, a rare plane that first rolled out of the factory June 28, 1941.

“Back in its day the airplane was first of its kind,” Koerner said. “It featured all-metal construction, except for the wings that are fabric covered. That was a departure from the conventional tube and fabric construction of the day.

“This was the deluxe model, dubbed the Silvaire,” he added. “It came with an art deco-style instrument panel, full leather interior, a fancy red stripe on the wings and fuselage, one-of-a-kind, all-metal wheel fenders, and a fuel-injected 75-horsepower engine.

But this particular airplane was a long way from the factory when Alex and his father, Steve, discovered it. It was in pieces. According to the story the Koerners were told, the plane was first used at a flight school but wound up with a pair of hunters who used it in an ill-fated coyote chase.

“One of them flew the airplane while the other sat with his shotgun sticking out the window,” Alex related. “While flying low to the ground – trying to shoot coyotes – both men got distracted, and the airplane crashed into some trees.

“The men survived, but the airplane didn’t,” Alex explained.

The plane was recovered, then disassembled and hung in a barn. Years later, it was sold and moved. Parts became separated. The engine was sent to a scrap yard. And the wings were once again hung up to wait for an owner capable of putting this puzzle together.

In 1991, a friend of the Koerner family purchased the plane – pieces. As a professional aircraft restorer, he knew the rarity of the 8C: Only 260 models were ever produced. He scoured the nation for the parts that were missing and even found the factory-original engine, still at the very same scrap yard.

With that owner’s retirement, he decided that he was willing to pass the project on to a younger man. And Alex was that guy.

“My father and I looked at it, and we knew we had to have it,” Alex said, referring to that fateful encounter in Naperville, in November 2007.

“We picked it up and brought it to its new and final home,” he said, still shaking his head over the sight of boxes full of parts and a sense of being overwhelmed by the task.

“We worked on it whenever we had free time. It was always a three-step project: Forward one step, then back two. We ended up putting new metal skin on three-quarters of the fuselage and tail. We completely rebuilt and recovered the wings.

“We Installed long-range, wing fuel tanks: The original tank sat right behind the pilot’s head in the fuselage,” he continued. “And we refinished the instrument panel to factory original.”

The accident left the cowling – the nose of the fuselage – flattened and twisted. The Koerners had to bring in a very talented metalworker to handcraft a brand new cowling, that now looks as good, or maybe a little better, than the original. The final steps were polishing the aluminum skin to a high gloss and painting the red stripe on it.

After a series of tests, Alex’s pet project was ready to fly last summer. It would be its first flight in 61 years.

“The airplane performed like it couldn’t wait to break the surly bonds of earth and jump into the sky,” he said, quickly noting that he’s now looking forward to a full season of showing off this piece of aviation history.

“After four years of work on that plane, I realized on that first flight that every hour was completely worth it,” he said.

Information from: The Daily Journal, http://www.daily-journal.com 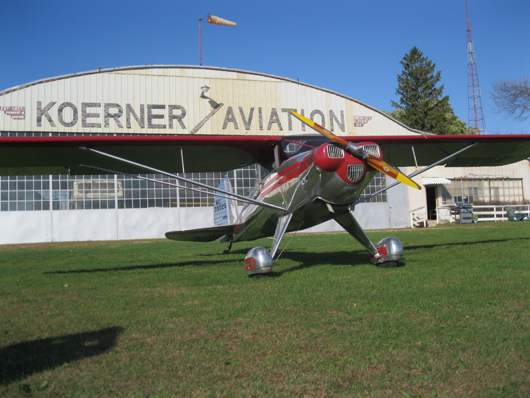 The Luscombe 8C Silvaire, with its polished aluminum skin, looks as spectacular as it did when the plane was built in 1941. Koerner Aviation image. 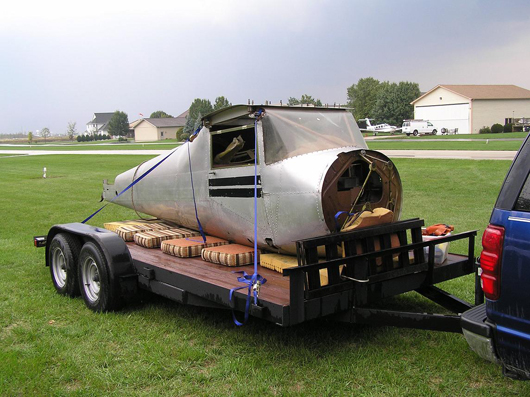 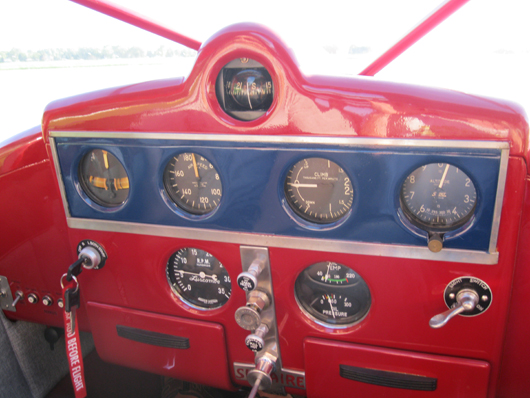 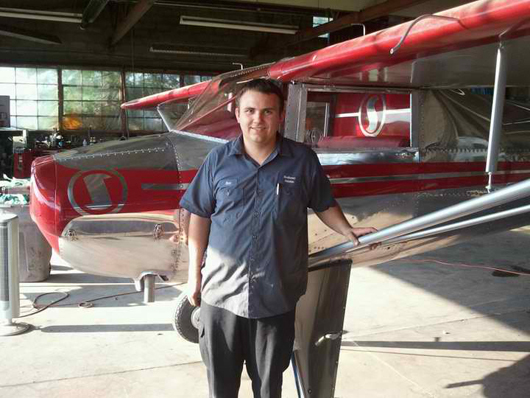