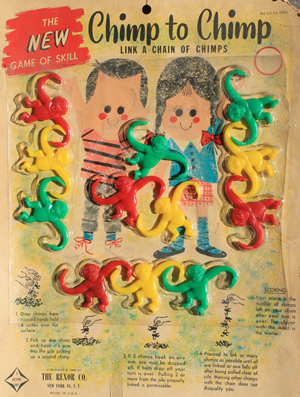 Before Lakeside picked up Barrel of Monkeys, the game was called Chimp to Chimp. Photo by the author

NEW YORK – Everyone of a certain age remembers playing the game Barrel of Monkeys. The author provides a behind-the-scenes account of how the popular 1960s game came to be.

When Pixar featured Barrel of Monkeys in all three Toy Story movies, it was proof that this celebrated toy was not only iconic, but still a whole lot of fun. It’s hard to believe that it has been hanging around us since early 1965, and yet, 2015 will mark Barrel of Monkeys’ 50th year in stores. As popular as it is, finding facts relating to this classic game’s origin is nearly impossible.

Milton Dinhofer, now 91, provides the missing links regarding this nostalgic toy’s evolution. After earning his engineering degree at Rensselaer Polytechnic Institute, Dinhofer went on to design the recognizable monkeys found in those plastic barrels today. Dinhofer didn’t work for a big toy company; it was at his Long Island home where he toyed with his many game ideas.

Leonard Marks, the Barrel of Monkeys inventor on file, was a schoolmate of Dinhofer’s. Marks told Dinhofer in 1961 that he had an idea for a game – an idea that came to him while waiting to sell his line of greeting cards to a small mom-and-pop shop. Dinhofer recounts the story Marks told him: “As he waited for the shop’s owner [Robert Gilbert], Marks started fiddling with [an open box of] snow-tire-replacement-chain links that were on the counter – hooking them together. Later when the owner approached to look at Marks’ greeting cards, Marks was still playing with the links.” Dinhofer adds: “Marks was so interested in playing, he hadn’t realized so much time had passed. He said to the owner, ‘this would make a great toy.” Gilbert then said to Marks he was friends with a successful toy promoter named Milton Dinhofer.” Marks immediately reached out to his old school friend.

Dinhofer had already had two major toy achievements to his credit. He created what he believes to be “the first full-size wearable space helmet.” His helmet made the covers of both The Saturday Evening Post (Nov. 8, 1952 issue) and Collier’s magazine (April 18, 1953 issue). Prior to that, he invented, designed and successfully brought to market Sip-n-See. This was a line of twisted plastic drinking straws with characters on them. Dinhofer says it was not only the “first twisted straw,” but also the “first plastic drinking straw” on the market. It provided an alternative to the glass and paper straws being sold at the time, and Dinhofer says it sold over “five million pieces.” One of those straws would influence the design of Barrel of Monkeys.

Recounting his first business meeting with Marks, Dinhofer said: “Marks brought a pile of his links over and started playing with them.” They are in Dinhofer’s possession today and are red, s-shaped links made from a one-quarter-inch plastic rod. Each link has pinched ends for connecting. Dinhofer said that as he watched Marks play with the links, he thought to himself, ‘monkeys!’

“I told [Marks] he had a winner …  I would develop it and he should sell it … We signed an agreement that night.” Asked why he chose monkeys, Dinhofer responds: “What else would you make them? Monkeys came to my mind instantly.” Dinhofer modeled the monkey’s arms after his Sip-N- See cowboy straw which had s-shaped arms just like a link.

“Our first step,” Dinhofer explained, “was to have a patent search made. Many linking games were disclosed but nothing with animals.” Dinhofer said that while none of those patented toys were successful, he still believed in theirs. It would take Dinhofer three months to go from a sketch to a functional monkey – in other words, likable and linkable. “We had to have 10 to 15 perfect pieces in order to see how they played,” he said, adding that the biggest challenge in designing them was the monkey’s balance. After that, he said, “I researched monkey photographs and made numerous sketches until I got a cute face down on paper.” Dinhofer selected a body he liked from another of his sketches and then hired a professional model maker. A. Santore of A.S. Plastic Model Co. carved, under Dinhofer’s supervision, one perfect sample. Dinhofer then found a company that would make a beryllium mold from Santore’s monkey and run sample monkeys from it. Looking at Dinhofer’s first-run monkeys, one sees that they look exactly like Lakeside Toys’ 1965 debut version. The only difference between Dinhofer’s monkeys and today’s is that shortly after the toy’s release, more hair was added to their bodies.

Next Dinhofer had to name it. “More fun than a barrel of monkeys,” was a common phrase in the ’60s that dated back to at least the 1800s. But that was not where Dinhofer and Marks got the name for their toy. Dinhofer disclosed, “I also have one package…with the name Chimp to Chimp on it.” Chimp to Chimp was Barrel of Monkey’s initial name and like BOM, it had 12 monkey playing pieces. Twelve monkeys “seemed just right,” said Dinhofer. “Three to 12-year-olds had to stand to link all 12.” Thus too many links would require actually lifting the children higher to accommodate the growing chain of monkeys – a situation where more wasn’t necessarily better. Asked if Chimp to Chimp monkeys came in a cardboard tube like Lakeside’s 1965 version, Dinhofer says: “Lakeside had more experience at $1[retail prices]. I had designed very expensive packaging. It was much more expensive than the cardboard can that Lakeside used and much more expensive to load.”

At last Chimp to Chimp was ready to be shown to retailers. Dinhofer says, “Marks showed to Woolworth’s … it was the biggest chain with 2,100 stores. They liked it but wanted a guarantee that we would put it on TV for 13 weeks (approximately $150,000-$275,000 worth of commercials).” TV advertising was becoming the norm, but was impossible for Marks and Dinhofer to agree to Woolworth’s deal; it was too expensive and too risky for them to chance a failure. After that, Marks told Dinhofer there was no further interest from retailers. Marks moved on and partnered with another man named Herman Kesler.

In 1969, Dinhofer met James R. Becker at Lakeside. Becker would eventually become Lakeside’s president and go on to help pioneer global licensing as we know it today. But at the time, Becker was a vice president and still relatively new at Lakeside. Through Becker’s recounting, Dinhofer came to learn how Lakeside picked up Barrel of Monkeys from Kesler and Marks. In 1964, Kesler called Zelman Levine, the chairman and president of Lakeside Toys, and set a November meeting in New York City. At the meeting were Levine, Becker and Lakeside’s soon-to-be national sales manager, Stanley Harfenist (Harfenist was trying to bring the Gumby toy line to Lakeside, which he eventually did in February 1965. Harfenist then went on to become Lakeside’s general manager.)

Becker told Dinhofer that Kesler walked into Levine’s room and just as Marks had done with his links at Dinhofer’s, Kessler uncupped his hands, dropped the monkeys onto a table, and started to link them together. Becker also said that the phrase “more fun than a barrel of monkeys” was brought up at that meeting by Becker himself. Zelman Levine immediately approved the item, and Zelman took all the samples back with him to Minneapolis.

Dinhofer’s legal documents show Kesler and Marks signed an agreement with Lakeside on Jan. 29, 1965. Dinhofer also has royalty statements showing gross sales beginning in the first quarter of 1965. He speculates that if Lakeside used his original mold, that would explain how the toy got to market so fast after contracts being signed. Lakeside also used similar packaging to their already successful Pick-Up-Sticks game, which probably sped up the release process. Dinhofer’s news clippings show that that by April of 1967, Barrel of Monkeys was No. 2 on Toy and Hobby World magazine’s “Toy Hit Parade” chart. Coincidentally, at No. 3, was BOM’s future Toy Story co-star and eventual Hasbro-brand mate, listed simply as Potato Head.

Today BOM is part of Milton Bradley under the Hasbro umbrella. As one of Time magazine’s “All-Time 100 Greatest Toys,” (2011) prepares to turn 50, Dinhofer can’t help but reflect. Taking it all in, he shares: “I had a lot of talent. Too bad it took me 50 years to realize it.”

But thanks to Dinhofer and many other talented people, Barrel of Monkeys has successfully run without batteries for almost half a century. Why is it so successful? Is it the barrel, the monkeys or the links? Maybe it’s the game’s simplicity? It certainly doesn’t hurt that it brings a smile for under $10. Quite possibly, it was just a perfect storm of ideas, people, timing and luck.

Whatever the reason for BOM’s longevity, after hearing Dinhofer’s recounting, one can’t help but imagine a big 50th bash with monkeys swinging from chandeliers, barrels of champagne flowing, and Dinhofer photoBOMbing us all. At the very least, we can raise a glass and toast to him and all who put those monkeys in a barrel, and those barrels into tiny happy hands. And when Milton raises his glass, may he be beside his favorite links – his family, his children, his great-grandchildren, and his great-great-grandchildren, because, truly, what could be more fun than that? 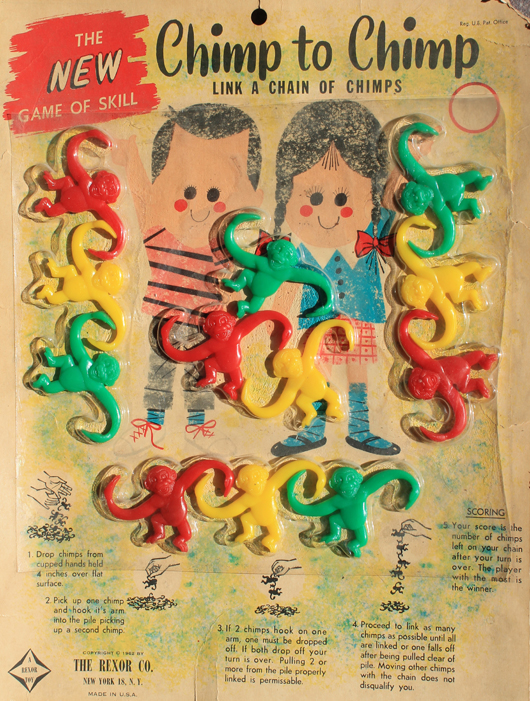 Before Lakeside picked up Barrel of Monkeys, the game was called Chimp to Chimp. Photo by the author 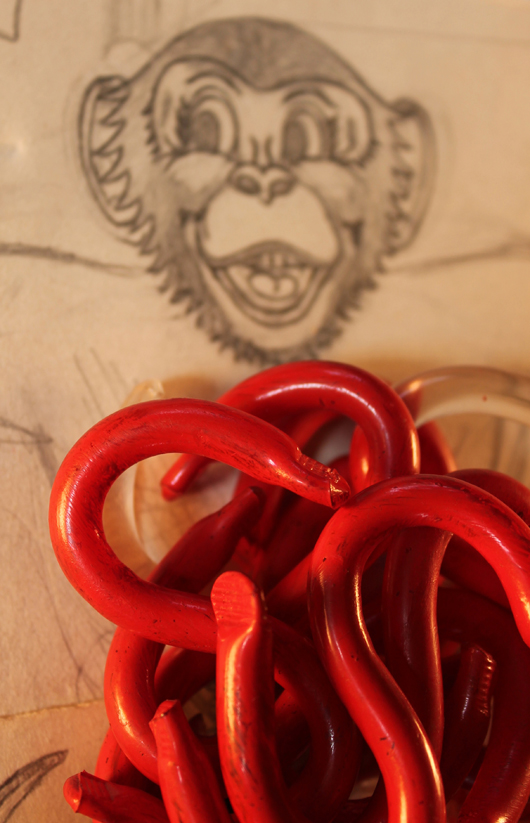 These are the original links Marks brought to Dinhofer. With them are Dinhofer’s original drawings that the links inspired him to create. Photo by the author 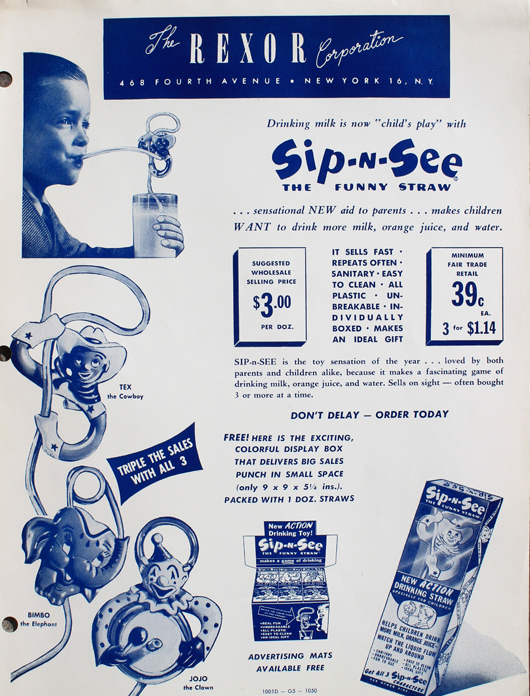 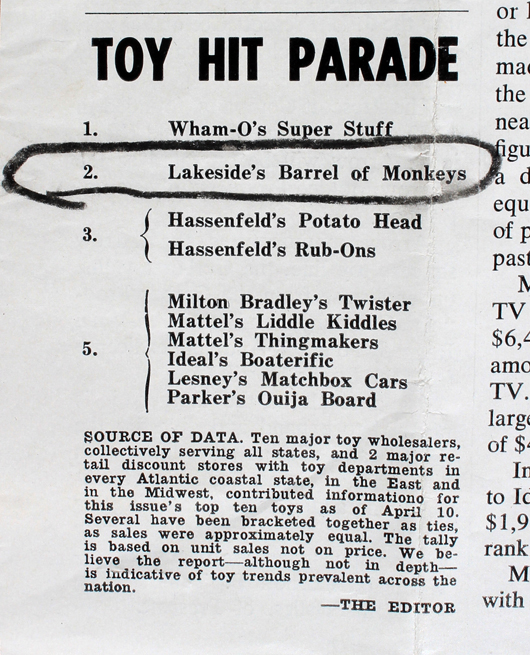 Leading toys from the April 3, 1967 ‘Toy and Hobby World’ magazine. Photo by the author 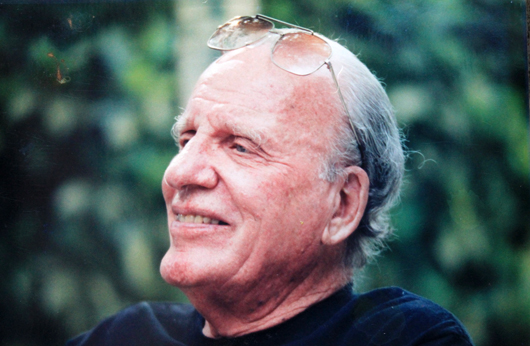 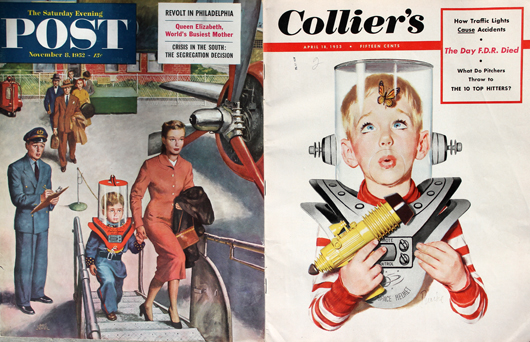 Covers of leading magazines featured the toy space helmet designed by Dinhofer. Photo by the author