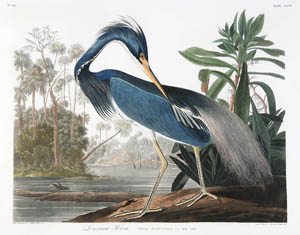 Perfect for New Orleans, the Louisiana Heron was top Audubon lot at the Neal Auction sale in September. The spectacular shorebird was purchased by a local collector for $137,425, a new record for that image. Image courtesy of Neal Auction Co., New Orleans.

In a year when prices have declined for some Americana categories, values for mid-19th century Audubon bird prints have soared to new levels. In September, Neal Auction Co. in New Orleans set 18 new world records when it sold a large collection of Audubon examples consigned by well-known print dealer W. Graham Arader.

Neal has established its reputation as an important outlet for Audubons through sales figures that have surpassed even the major auction houses of New York and London. This is appropriate, since the Southern city held a special place in the artist’s heart. Born to French parents on the island of Saint-Domingue (now Haiti), John James Audubon (1785-1851) later adopted New Orleans as his “natal city.”

After Audubon’s father returned to France, he sent his son to America at the age of 18 to avoid conscription in the Napoleonic Wars. There, the young man married and began a family, while trying many careers without much success. At an important turning point, he decided to combine his interest in ornithology with his talent as an artist.

In Audubon Art Prints: A Collector’s Guide to Every Edition (University of South Carolina Press 2003), Bill Steiner stresses the immensity of the artist’s undertaking: “He committed himself to paint every bird in North America. All of them including eagles, swans, herons, and cranes, were to be painted life-sized.”

Audubon hired engravers, principally Robert Havell in England, to turn his bird paintings into plates that could be printed and bound into a volume. The costs would be supported by selling subscriptions for the massive completed work to interested scholars and collectors.

“The project was finally completed in 1839,” continues Steiner. “The Birds of America was made up of 435 hand-colored prints bound in four huge volumes. The ‘Great Work,’ as Audubon called it, was produced by printing etched copper plates onto double elephant folio paper measuring 28 by 39.”

Although there were later printings of the Audubon birds, collectors prize these large Havell edition prints above all. The prints are usually sold individually, but rare intact sets surface on the market occasionally.

On Dec. 7, Sotheby’s in London will offer a complete Birds of America in a sale of books from the collection of Frederick, 2nd Lord Hesketh. This lot, described as “the most expensive book in the world,” is expected to attract as much interest as the complete copy sold at Christie’s in 2000 for $8.8 million. It is estimated to sell for 4 million pounds to 6 million pounds ($6.39 million-$9.58 million).

When it comes to purchasing individual examples of the prints, suitable for exhibition at home, all birds are not created equal. Large birds that completely fill the double elephant folio page, shall we say, rule the roost.

Marc Fagan, print expert at Neal’s who oversaw the September sale, says, “I think the Audubons are broken up into different tiers, where tier one is big birds. They really have to be posed in a certain way so that they can fit in that format. They’re life-sized so he had to have them bending or leaning, and their necks bent in odd shapes. I just think they are a more exciting package than the smaller birds.”

The big bird category includes many of the beautiful wading fowl found in the Southern United States. Top lot of the September sale was the Louisiana Heron, which sold for a record $137,425. This far surpassed the $89,625 paid for the view in the previous benchmark auction, Christie’s famous 2004 sale of Audubons from the ducal house of Saxe-Meiningen in Thuringia. In order to fit the rectangular format, the heron turns its head back to preen its wings.

Other successful waders at Neal’s were the Purple Heron and the Great White Heron, both bringing $83,650, second only to the Sachsen-Meiningen prices. A male and female Scarlet Ibis found a buyer at $20,315.

Also firmly in the big bird category were two other world record prints: the Great American Cock Male, Wild Turkey sold for $131,450, and the Wild Turkey, Female and Young, sold for $65,725. The Golden Eagle with prey in its talons brought $13,145.

“This sale was interesting because I saw the whole gamut from true collectors who have maybe 10 or 20 prints to people who always wanted one and this was their first purchase,” said Fagan.

When assessing Audubon prints, he points out, “They were all in good to excellent condition, so that always helps. For the true collectors, the condition is all-important. They’re looking mainly for color. Any kind of foxing, even small tears, that can be remedied and not affect the value. But if an example has been faded, you can’t do anything about it – that’s gone.”

In Audubon Art Prints, Steiner says this of the painstaking coloring process: “After the ink had dried, the prints were given to a small army of watercolorists (Havell employed 50). In the late 18th and early 19th centuries, hundreds of books with color prints were produced using hand-coloring methods, and many major cities had watercolorist guilds with apprentices, journeymen, and masters.

“In general, the birds themselves appear to be much more carefully painted than the backgrounds, which probably indicates that the more experienced painters did the birds and the apprentices colored the branches, leaves and landscapes.”

Color – pink, to be precise – plays a major role in values for two of the most popular Audubon prints, the American Flamingo and the Roseate Spoonbill. Both long-necked waders are shown with head bent in a feeding position to fit the format. Prices for the two desirables at Christie’s in 2004 were $197,900 and $175,500 respectively.

Neal Auction Co. offered another example of the latter in their Nov. 20-21 Louisiana Purchase Auction, estimate $60,000-$90,000. “The Roseate Spoonbill is one of the top tier birds, and it has everything going for it,” said Fagan.

“It’s a large shore bird and it has an unusual pink color. The color is absolutely spectacular. It was in a collection and displayed in a dark hallway for over 30 years. That accounts for its nearly perfect condition. I’m touting it as the greatest Roseate Spoonbill since that Sachsen-Meiningen sale.”

The brightly colored Roseate Spoonbill is one of the most sought-after prints from the Havell edition of Audubon’s ‘The Birds of America.’ In exceptionally good condition, this example from an Alabama estate sold for $95,325 at the Neal Auction. Image courtesy of Neal Auction Co., New Orleans.

Too expensive for the Thanksgiving table, these Wild Turkeys brought record prices at auction in September. The tom turkey with bamboo background sold for $131,450, the hen and her young for $65,725. Image courtesy of Neal Auction Co., New Orleans.