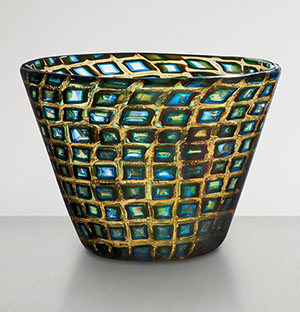 NEW YORK – “Venetian Glass by Carlo Scarpa: The Venini Company, 1932-1947,” the current exhibition at the Metropolitan Museum of Art, is accompanied by a comprehensive catalog filled with new research. The show and scholarship provide a treasure trove of valuable information for collectors of 20th century glass. As examples of Scarpa’s glass appear at auction this year, buyers will have a greater appreciation of the complex process involved in taking the designs from drawings to completed works.

Born in Venice, Carlo Scarpa (1906-1978) falls into that long tradition of architects who ventured at times into designing furniture and decorative arts for interior settings; fellow countryman Gio Ponti (1891-1979) and American Frank Lloyd Wright (1867-1959) are other good examples. While Scarpa continued to practice architecture – most surviving projects are in and around the city where he worked – it is his 13-year collaboration with Murano glassmaker Paolo Venini that is celebrated in the exhibition.

Sheena Wagstaff, the MMA head of Modern and Contemporary Art, said: “We have the great fortune of partnering with the prestigious museum Le Stanze del Vetro to take up a once-in-a lifetime opportunity to bring to New York glass works of extraordinarily high caliber, that have never before been seen in any American museum. Visitors will encounter beautiful, translucent, and ethereal glass vessels, created from Scarpa’s radical pushing and expanding of glass-blowing techniques to their absolute limit.”

Viewers visiting the show of nearly 300 works will be dazzled by the vivid colors and intrigued by the variety of forms and textures that sprang from Scarpa’s architectural approach to glassmaking. There is no substitute for the visual impact of all that beauty. In a review, the New York Times suggested, “If you are open to it, this exhibition can radically reshape your ideas about form, beauty, originality and art for art’s sake.”

The exhibition was adapted from an earlier one at Le Stanze del Vetro, a gallery in Venice devoted to the study of modern glassmaking, and continues in New York until March 2. As an added bonus, the Metropolitan has displayed nearby works from Europe and Asia that influenced Scarpa’s designs, such as ancient Roman mosaic glass and Chinese porcelain vases.

Collectors, however, will consider the massive and highly detailed catalog the gift that keeps on giving, because in its pages editor and exhibition curator Marino Barovier and his panel of scholars explain why and how each piece was created. Many individual catalog entries are accompanied by Scarpa’s original design drawings. The glass exhibits are grouped into over two dozen technical groups with descriptive Italian names such as Pennellate – brushstrokes. This profusion of decorative methods is further testimony to the architect’s prolific creativity. While some styles come up often at auctions and shows, pieces in less well-known categories are true eye-openers.

Most familiar to collectors will be the vases in the 1938 Rigati (striped) and 1940 Tessuti (woven) techniques, both of which employed multicolored glass rods. Corrosi 1936-1938 featured forms with a surface textured by emersion in acid. Some examples from this series are characterized by decorative relief attachments – sweeping ellipticals or button-like bugne or bosses. Less common is a 1940 group, Laccati neri e rossi, which imitates the black and red lacquer of Chinese objects.

The catalog presents revealing biographical information on Scarpa’s career including an opening essay by MMA Curator Nicholas Cullinan, who helped organize the exhibition. “The Wholeness of Inseparable Elements: Clarity and Form in the Work of Carlo Scarpa” orients the glass creations within the architect’s entire body of work. The curator points out how difficult life was for artists during the rise of Fascism in Italy: “The fact that Scarpa was able to advance his bold ideas in architecture and design without the sponsorship of Benito Mussolini’s regime is a remarkable accomplishment that should not be overlooked.”

After World War II, Scarpa focused on the task of reconstruction. Cullinan writes, “During the remarkable postwar period of renewal and restoration in Italy Scarpa’s extraordinary architectural career blossomed.”

Specializing in 20th century design, Wright Auctions is unique in offering annual sales dedicated to Italian Glass, and Scarpa’s works have been an important component. As one catalog entry noted, “ … perhaps more than any other glass designer of his time, Scarpa created pieces that were both shockingly modern and of enduring classical beauty.” As can be seen from the accompanying illustrations, the June 2013 auction included rare examples made during the architect’s years at Venini which realized exceptional prices, and the upcoming sale on May 20, 2014 will offer more lots designed by Scarpa.

In a recent interview, President Richard Wright said, “We’ve been most active in that market. Last year’s sale had some exceptional Scarpa pieces, and we’ll have our third stand-alone glass auction in May.” Prices in 2013 ranged from a simple mezza filagrana bowl at $2,750 to a highly desirable pennelate vase that brought an impressive $74,500.

Based in Chicago, Wright has added gallery space and consignment offices in the historic Parke-Bernet building on Madison Avenue in New York City. After visiting the Scarpa show at the Metropolitan Museum of Art, the auctioneer said, “The exhibition is a tour de force – it’s really impressive. There are so many exhibits that I really respond to, including some very rare mosaic pieces that are truly experimental. In the Met show, they show Roman mosaic glass from their collection nearby Scarpa’s versions, variations and inventions.”

Wright continued, “He also made Chinese- inspired vessels which are sublime. When they’re at their best, they have all the beauty of perfect Chinese porcelain – form and color and proportion, all in harmony. That speaks to his talent – the fact that he can work in such a range of styles and do so successfully. He had an ability to absorb all of these ancient techniques of glassmaking and make them relevant in the 20th century. He’s a big part of the reawakening of that craft movement. He trained as an architect and he had a wonderful sense of proportion and incredible sensitivity to materials.”

For more information about the past and future sales of Italian glass at Wright, go to www.wright20.com to view the online catalogs. 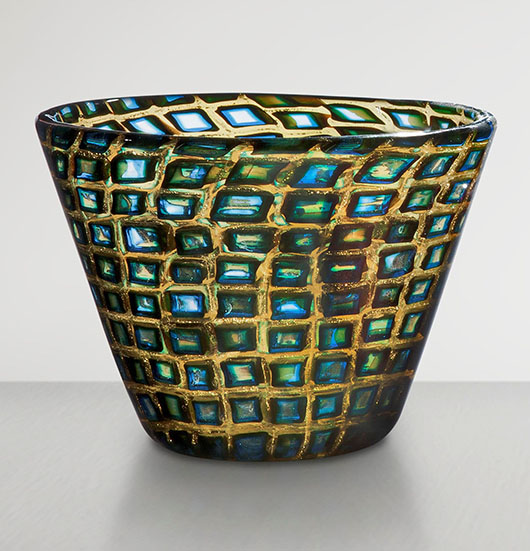 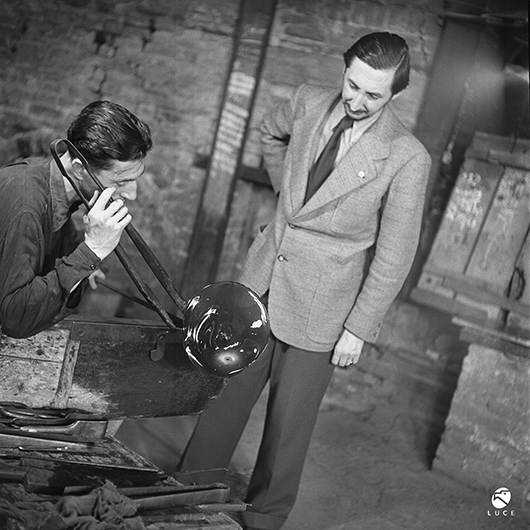 From 1932 to 1947, Carlo Scarpa (1906-1978) served as artistic director at the Venini Glassworks, where he developed innovative techniques that reinvigorated Venetian glassmaking. Scarpa (right) is shown with glassmaker Arturo Biasutto at the factory in an archival photo from 1943. Archivio Storico Luce. Photo courtesy Metropolitan Museum of Art. 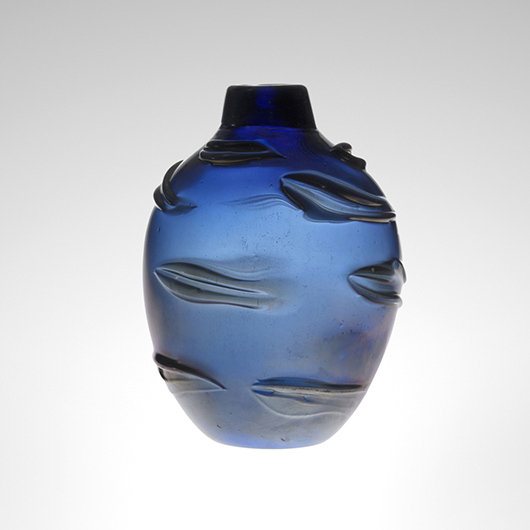 Among his works with relief decoration, Scarpa designed a series featuring swirling elliptical patterns and an iridized surface. A beautiful deep blue rilievi vase, circa 1935, doubled its high estimate to sell for $81,700 in Wright’s Italian Glass auction in June 2012. Courtesy Wright Auctions. 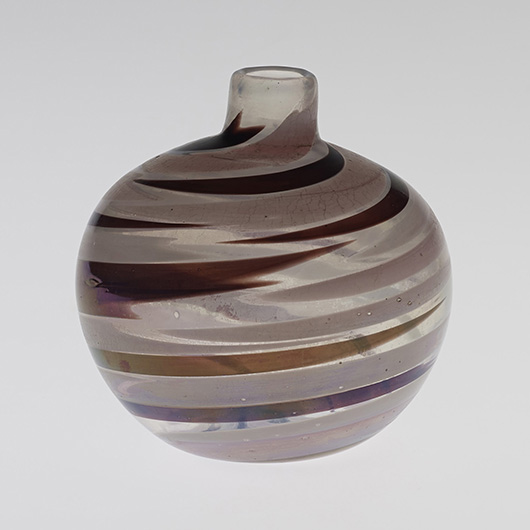 While the world was at war in 1942, Scarpa and Venini produced a rare series of glass forms that look like they were decorated with brushstrokes or Pennellate of color. Collectors pay a premium for examples of this technique; this small vase sold for $74,500 in June 2013. Courtesy Wright Auctions. 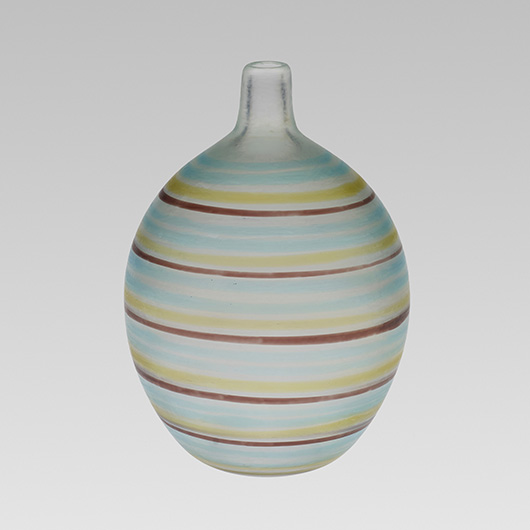 Glass in the a fili technique, decorated with horizontal thread-like colored bands, was first exhibited in Venice in 1940. This narrow-necked vase, almost 9 inches high, brought $41,250 at auction in 2013. Courtesy Wright Auctions. 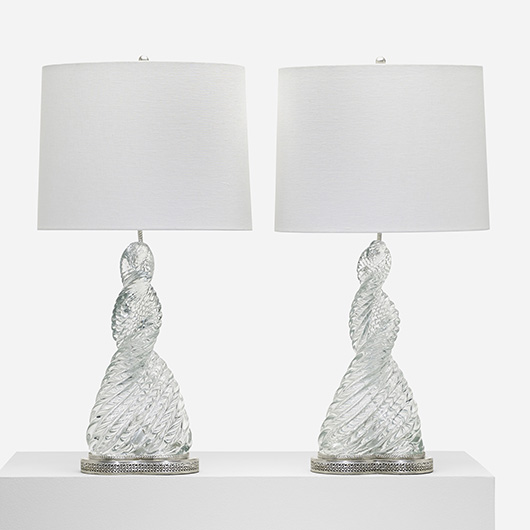 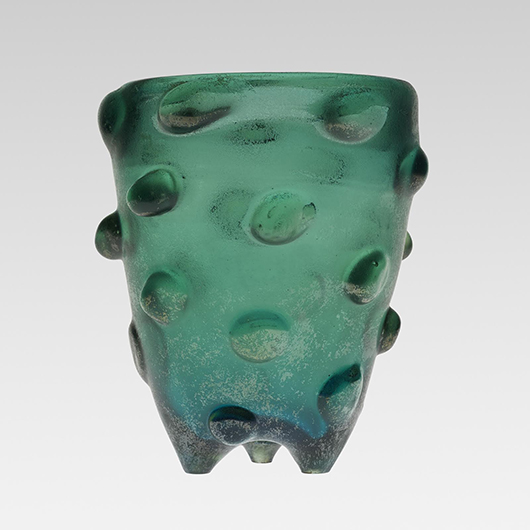 This deep green vase with an iridized corroso surface is decorated with bugne or bosses in relief. The circa 1935 work, signed inside the lip ‘Venini Murano,’ sold for $30,000 last year in Chicago. Courtesy Wright Auctions. 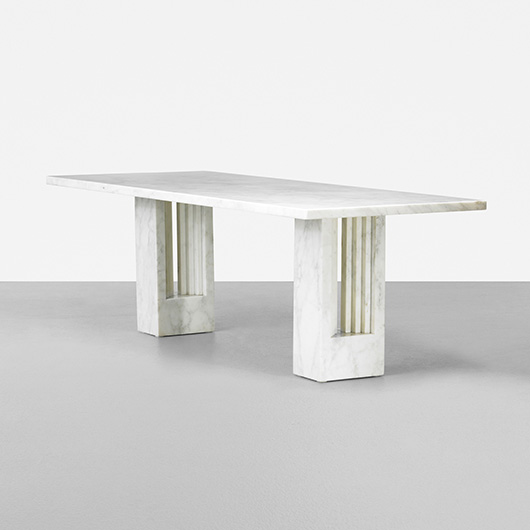