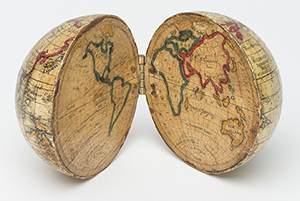 Today, this pocket globe from the Holbrook Apparatus Manufacturing Co. of Wethersfield, Conn., 1830–59, might be called a learning toy. To a young student in the 19th century, the three-dimensional paper and wood map was a prized possession that extended his knowledge of the world. Image courtesy Winterthur Museum; Bequest of Henry Francis du Pont.

WINTERTHUR, Del. – Before global positioning satellites photographed the earth from outer space, paper maps were the cutting-edge technology that connected man with the world around him. What lies beyond the river? How do I get to the next settlement? Where does one country end and another begin?

To find the answers, explorers undertook perilous journeys through mountains and across oceans, taking measurements and drawing physical contours. This painstakingly assembled data, once analyzed, ensured that ever more accurate maps could be published and distributed.

“Common Destinations: Maps in the American Experience,” an exhibition running through Jan. 5 at Winterthur in Delaware, brings together more than 100 rarely seen exhibits dating from the 1750s to the 1870s. The maps and objects, drawn from the permanent collections of the famous museum and its research library, illustrate how cartography influenced daily life on this continent.

The exhibition was conceived and curated by Dr. Martin Bruckner, associate professor in English and American literature at the University of Delaware, who also has secondary appointment in the Center for Material Culture Studies. He is the author of The Geographic Revolution in Early America: Maps, Literacy, and National Identity (UNCP, 2006).

He stated, “Then, as today, American took pride in building unity out of diversity, and maps helped a fledgling nation forge common bonds and foster good citizenship. Visitors will see how men used maps at home and abroad; how women and children engaged with maps to nurture family ties; and how maps became the social glue that would bind a people of strangers into a community during times of change and development.”

In a painting by Edward Savage (1761-1817) which is closely tied to the exhibition theme, George Washington and his family examine the new plan for a national capital city. In 1791, the president had asked French-born architect Pierre Charles L’Enfant (1754-1825) to submit a grand design, and his unusual grid plan with diagonal avenues intersecting north-south and east-west streets at circles and plazas is very much in evidence in the layout of modern Washington. Today the work would be done with a computer program, back then the plans were laboriously drawn by hand using drafting instruments.

One of the themes explored in the show is how mapmakers were working out a balance between artistic elements—the decorative cartouches and flourishes—and the developing interest in even greater scientific accuracy in the content of the maps. Serious map collectors have been among the most enthusiastic visitors since the exhibition first opened in April.

Many more will come later this year for a scholarly conference at Winterthur on Oct. 11-12 featuring presentations by distinguished academics and a series of workshops with curators and conservators. By fall, “Common Destinations” also will be available as an online exhibition at www.winterthur.org, so that many more people have access to the material.

Catharine Dann Roeber, Winterthur curatorial fellow who worked with Dr. Bruckner on the exhibition, said, “There are wonderful maps in the show, but the emphasis is on how people interacted with maps and learned from them and incorporated them into their daily life. There are objects you would not normally see if you were just looking for the ‘greatest hits’ of American map-making.”

She continued, “One of the main things that Dr. Bruckner was trying to do was bring in the story of how maps were used and experienced by all types of Americans. So we have wonderful map samplers and one of the Westtown School needlework globes. We have paper maps that were made both by schoolgirls and schoolboys. There are ceramic objects that have images based on the cartouches from maps, so it’s really a multimedia exploration, not just the flat maps that people are used to seeing.”

She notes, “One of my favorite objects is a wonderful little pocket globe that was intended to be part of a kit for schoolchildren for learning geography. It’s called the Holbrook Apparatus. It’s a little globe that splits in half, so you have the world on the outside and a flat map on the inside.”

Some of the most recent objects in the exhibition come from the 1876 Centennial Exposition in Philadelphia, which revived public interest in American history and antique artifacts. Roeber says, “Philadelphia was an important center for map production. By the 19th century, a number of the printing houses were turning out maps in great numbers. At the Centennial Exposition, there were a number of these printing houses that were featuring maps for schools and institutions and town halls. We have some wonderful images of that.”

In the marketplace, rare maps can bring startling prices. Not long after the continent’s discovery, an early 16th century map commissioned from a group of scholars by the Duke of Lorraine first labeled our land mass “America,” a name derived from explorer Amerigo Vespucci (1454-1512). Christie’s referred to this as “The Million Dollar Map” when one of four known examples sold for more than that sum in 2005. The only extant large version of this map was acquired by the Library of Congress 10 years ago.

Marc Fagan, director of consignments, prints and maps at the Neal Auction Co. in New Orleans, is an expert on antique maps, particularly those of regional interest. From Texas to Florida, the young United States vied for territory with European powers. The great port city of New Orleans and the vast Louisiana territory were under both French and Spanish rule before being purchased in 1803. As sovereignty and physical borders constantly shifted, new maps had to be printed to reflect the changes.

Fireworks erupted on the floor at Neal’s annual Louisiana Purchase Auction in November 2009. Dating to 1858, a rare copy of Norman’s Chart of the Lower Mississippi River from Natchez to New Orleans after Marie Adrien Persac (American/Louisiana, 1827-1873) came up for sale with an estimate of $18,000/25,000. The map records the divisions of land along the river with owners’ names and features vignettes of New Orleans, Baton Rouge and plantations with a decorative border of cotton plant and sugar cane motifs. After spirited bidding, the important document was purchased for $316,000.

Fagan says, “That is one of the most famous maps regionally, and it is rare. In general, there are various reasons why people like maps. It might be the aesthetics, the rarity, the importance of them—whether they show something for the first time—and the condition. That map had it all. It was the first one to come up—no one knew when another one came up. It was aesthetically very pleasing. And two guys wanted it.”

Many of the historic maps sold at Neal’s emerge from old Southern collections. The expert explains, “A lot of times there will be several maps in a collection—two, three, four—that have been passed down. A man starts a collection and his family doesn’t want them for some reason. Or single maps will come out of a house. Whenever you have success for one thing, it draws consignors, particularly with the information available on the internet.” Potential consignors can easily find out the results for similar material in past sales, and they give the auction house a call.

Fagan is always on the hunt for historic maps from the Americas and Europe. He adds, “We’ve had globes, I love globes. We sold a good pair of English floor globes five years ago for about $75,000.” On his want list are early detailed county maps and city maps, which “are very difficult to come by.” Past catalogs can be viewed online at www.nealauction.com, and Neal sales are great destination auctions because of the food and entertainment possibilities nearby in the Garden District and French Quarter. 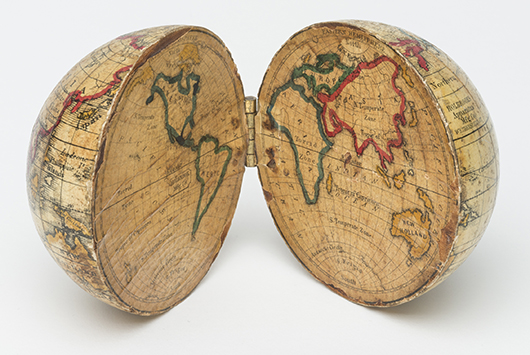 Today, this pocket globe from the Holbrook Apparatus Manufacturing Co. of Wethersfield, Conn., 1830–59, might be called a learning toy. To a young student in the 19th century, the three-dimensional paper and wood map was a prized possession that extended his knowledge of the world. Image courtesy Winterthur Museum; Bequest of Henry Francis du Pont. 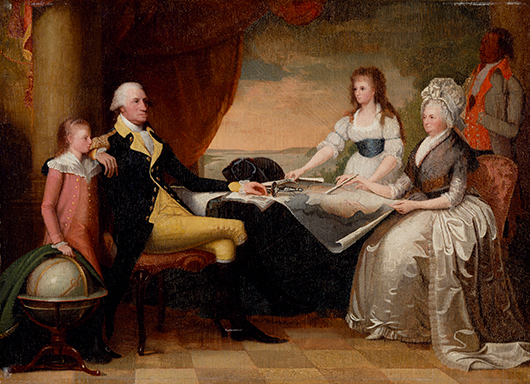 The Washington family gathers round the new plan for a national capital city drawn up by Pierre L’Enfant. This painting by Edward Savage, the keynote image of the ‘Common Destinations’ exhibition, is a perfect illustration of the role maps played in American public and private life. Image courtesy Winterthur Museum; Bequest of Henry Francis du Pont. 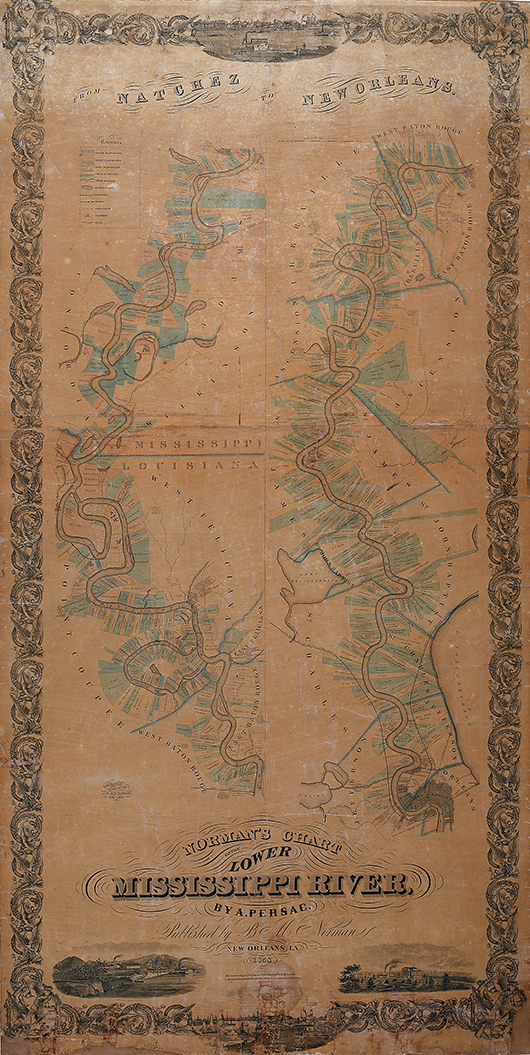 This 1858 copy of ‘Norman’s Chart of the Lower Mississippi River from Natchez to New Orleans’ after Marie Adrien Persac sold in New Orleans. The map shows divisions of land along the river with owners’ names and is decorated with artistic vignettes of the region. Two dedicated bidders drove the price well beyond the modest $18,000-25,000 estimate to a spectacular $316,000. Image courtesy Neal Auction Co. 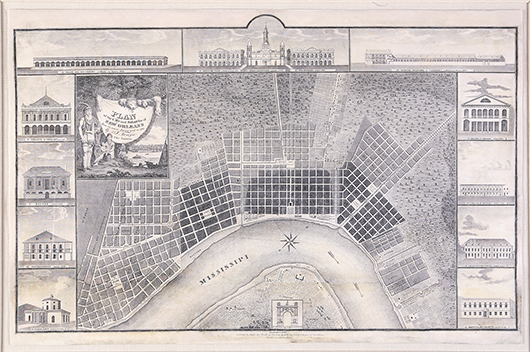 Printed in the United States in 1825, this map shows the city and suburbs of New Orleans according to an 1815 survey conducted by Jacques Tanesse. City maps are sought after by collectors and historians, and this plan framed by vignettes of city buildings sold for $16,133 at Neal’s in 2011. Image courtesy Neal Auction Galleries. 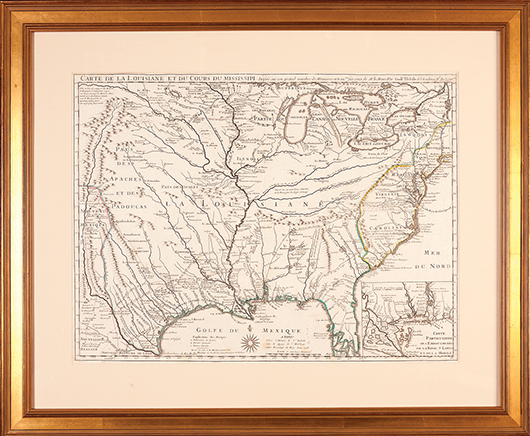 This 1718 map by Guillaume de l’Isle, published in Paris, shows the full extent of the French territory of ‘La Louisiane’ bordering the cluster of American colonies on the East Coast. The important document brought $13,743 at Neal’s last November. Image courtesy Neal Auction Galleries. 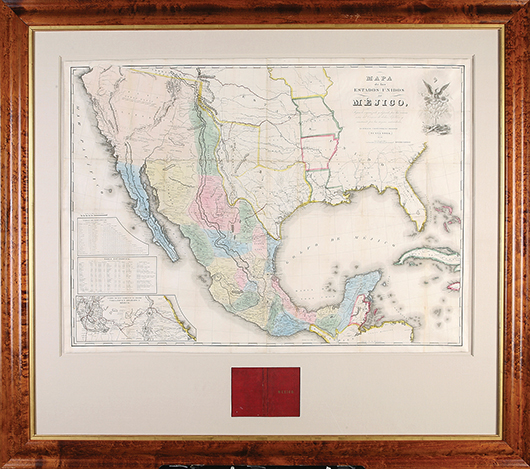 Who owned what in North America looked very different when John Disturnell of New York published this ‘Mapa de los Estados Unidos de Mejico … ’ in 1847. The historic map brought $107,550 at Neal’s in 2011. The map was an important reference in negotiating the Treaty of Guadalupe-Hildalgo, which established the border between Texas and Mexico. Image courtesy Neal Auction Galleries. 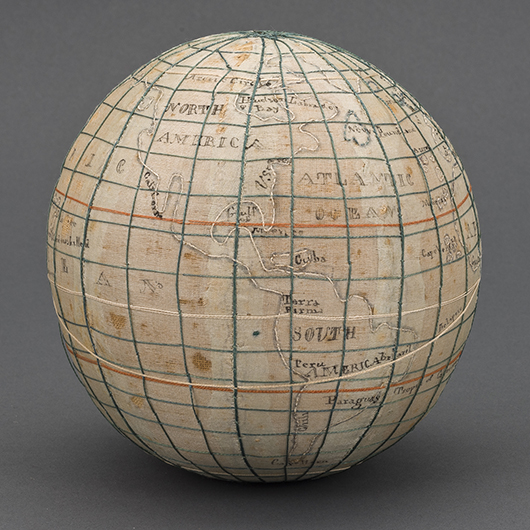 After spending many hours stitching this circa 1815 sampler globe, young Ruth Wright a student in Westtown, Pa., would have known her geography. The sampler map is one of several in the Common Destinations exhibition at Winterthur. Image courtesy Winterthur Museum. 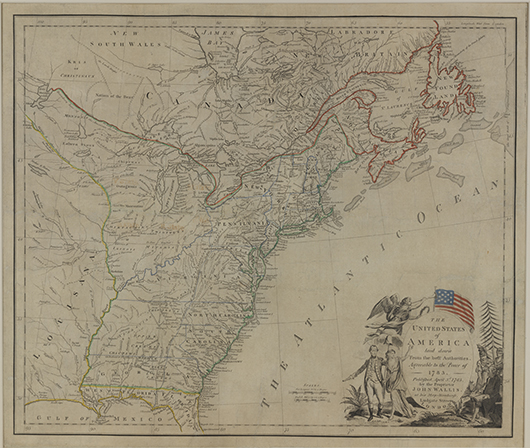 Not long after the Revolutionary War, John Wallis in London published ‘The United States of America Laid Down From the Best Authorities, Agreeable to the Peace of 1783,’ a copy of which is on display in Winterthur’s current map exhibition. Image courtesy Winterthur Museum; Bequest of Henry Francis du Pont.