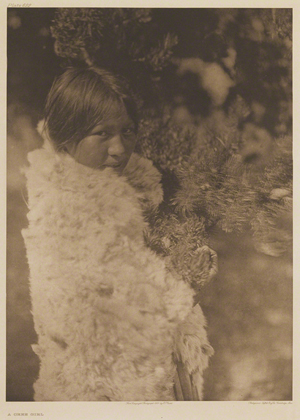 Native American images by Edward Sheriff Curtis (1868-1952) continue to bring strong prices in the auction market. A vintage platinum print of one of Curtis’s classic images, The Vanishing Race, brought $10,890 in the High Noon Western Americana Auction on Jan. 26.

His photographic career and relationship with tribal peoples has been the subject of extensive scholarly research and literary exploration. On view through June 16 at the St. Louis Art Museum, “Edward Curtis: Visions of Native America” examines the photographer’s monumental endeavor to document tribes in the early decades of the 20th century.

At the age of 12, Curtis built his first camera with the aid of a manual. In 1891, the young man and his family moved from Minnesota to Seattle, where he became part owner of a photographic studio. Under normal circumstances, Curtis might have become just another successful commercial photographer in a local market. Many made a good living taking carefully posed pictures of engaged couples and infants now buried in family archives.

Curtis’s interest in the natural world set his feet on a different path. While engaged in photographing scenic views of the Puget Sound for a contest, he took a portrait of a Native American mussel and clam digger, Princess Angeline (Kickisomlo), the nonagenarian daughter of Seattle’s Chief Sealth. Not only was Curtis’s work awarded a gold medal in the competition, his efforts to record tribal life – before it changed irrevocably – became the driving force behind his creative work.

On the E.H. Harriman expedition to Alaska in 1899, Curtis began to develop new skills as an amateur ethnographer. After returning home, he traveled throughout the country, taking photographs of Indian tribes. Although always strapped for funds, the photographer captured revealing portraits of tribal members and documented important ceremonies, dwellings, artwork and scenery around the settlements.

Soon, Curtis conceived a grand idea for a massive publication of his photographs with accompanying text. In 1904, he received an important commission – photographing the American president’s sons. His plans for the Indian study received a boost when he had an opportunity to discuss the project with an enthusiastic Teddy Roosevelt.

Finally in 1906, railroad magnate John Pierpont Morgan agreed to supply $75,000 as start-up money toward preparing and printing The North American Indian, a set of 20 volumes with 1,500 photographs. Over 200 complete sets were printed, and Morgan received 25 as part of the agreement.

Curtis labored on the project for over 20 years in a race against time to capture as much information as he could, even though Native American life was already rapidly changing as tribal members adopted 20th century technology. Scenes were undoubtedly staged at times, and some have criticized his decision to remove modern elements – such a clock – from the images. But his entire focus was on recording what remained of traditional tribal culture while it was still possible.

Eric Lutz, associate curator of prints, drawings and photographs at the St. Louis Art Museum, explained the goals of the current exhibition, which he co-curated: “I think what makes this show unique is the way we’re showing two sides of Curtis. We’re saying, you can’t just take a photograph at face value. You really have to think about the context in which it was taken.

“How much historical truth do we read into these images? And how much do we need to know about the context to understand it better? When most people look at Curtis photographs, they’re not automatically aware of the fact that most of the Indians had been moved onto reservations at the time those pictures were taken. These profound changes had already taken place by the time he did this project.”

Photographs taken by Curtis for The North American Indian, both portraits and landscape views, frequently come up for sale in the auction market at a variety of price points. Most common are examples of the photogravure prints which accompanied the set’s many volumes; prices start in the $150 to $500 range, with value depending on condition and the desirability of particular views.

Lutz explained the process: “Since he was very prolific as a print maker, there is a lot of his material out there. All the ones we have on display are photogravures – the photographer makes a printing plate from the negative in order to be able to reproduce it in quantity. When he made a printing plate, he could actually work on that plate to change the image if he wanted to take out a detail or heighten a feature. He liked to have that control over the image, which the process gave him. He could reproduce the image by the thousands. If you had to do that by hand, it would take forever.“

The Saint Louis Art Museum had been given around 2,000 Curtis images by a generous donor. Lutz admitted that it took some time to choose the small number on view: “There were some images that we knew ahead of time we wanted to show, ones that brought up a lot of interesting issues we wanted to talk about. For example, we wanted to show examples of his early portraiture versus later portraiture from the 1920s – the changes over time. In our case, because I was working with the curator of Native American art here, we showed images that brought up certain questions. Curtis had a very complex life. How did he go about doing this gigantic documentary project? We highlight some of the successes and some of the failures he had as a photographer.”

One of the curator’s personal favorites is A Cree Girl, a girl wrapped in a rabbit fur robe with natural scenery behind her. The young woman seems at ease in this candid rather than stiffly posed image. The movement of tree branches in the background gives a sense of motion to the picture. As he took more and more photographs, Curtis became better at quickly establishing a valuable sense of rapport with his subjects.

Around 1916, his photographic studio began to produce artistic gold tone or “Orotone” prints on glass. A negative chosen from his extensive inventory was used to print an image on a glass plate coated with silver gelatin emulsion. The plate was then covered on the back with gold-colored pigment. The completed prints were sold with a protective ornamental frame, which added to their decorative appeal.

The technique was popular at the time, and Edward Curtis made thousands of gold tone prints from his catalog of Native American photographs. He felt the process gave the photos more depth and transparency than traditional reproduction methods. The glass plates are fragile, however, and many were accidently destroyed over the years, so the surviving examples often bring higher prices than prints on paper. In the recent High Noon Western Americana Auction, a framed gold tone print of The Vanishing Race brought $5,747.50 and another framed view of Canyon de Chelly sold for $7,260.

Dozens of biographical volumes discussing Curtis’s life and work are available. A new assessment – Short Nights of the Shadow Catcher: The Epic Life and Immortal Photographs of Edward Curtis (2012) by Timothy Egan – is available in print and e-book formats. Christopher Cardozo has written many books on the artist including Edward S. Curtis: The Women (2005) with Louise Erdrich and Anne Makepeace. 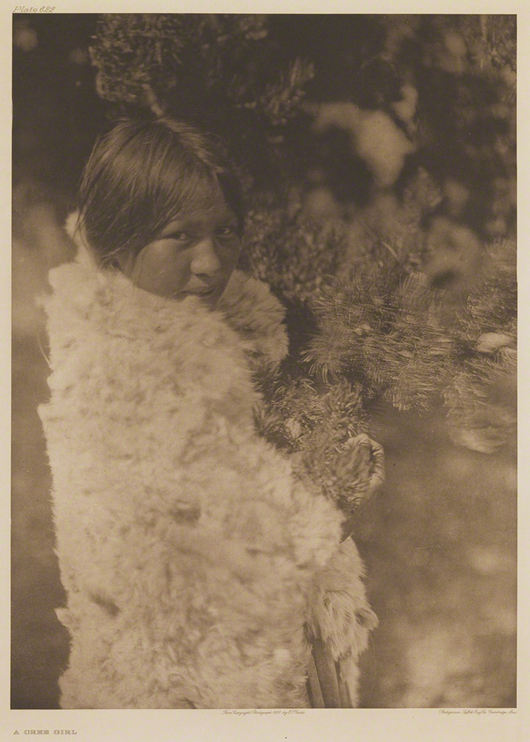 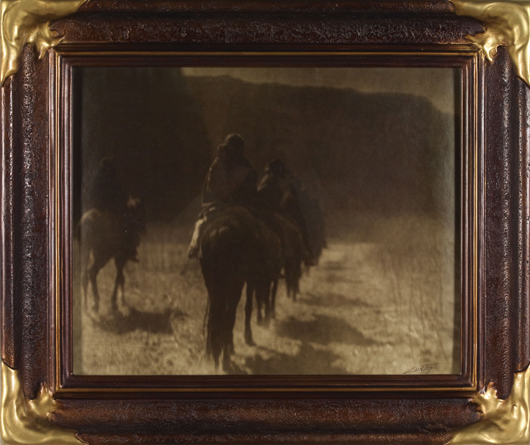 A vintage platinum print of one of Curtis’s classic images, ‘The Vanishing Race,’ brought $10,890 in the High Noon Western Americana Auction on Jan. 26. A gold tone print of the identical view in its original frame brought $5,747.50 in the same sale. Courtesy High Noon American Auctions. 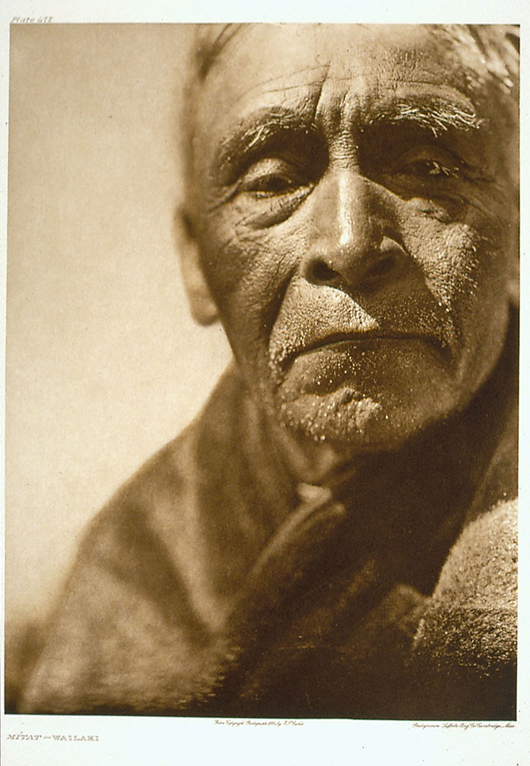 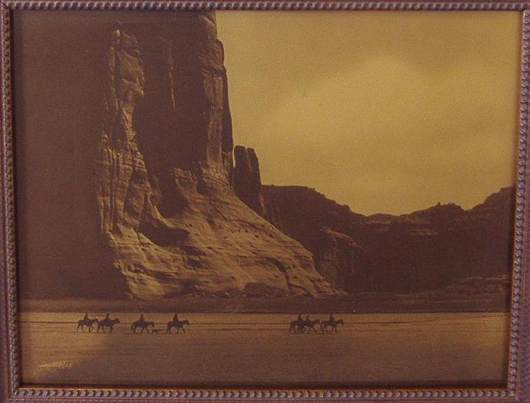 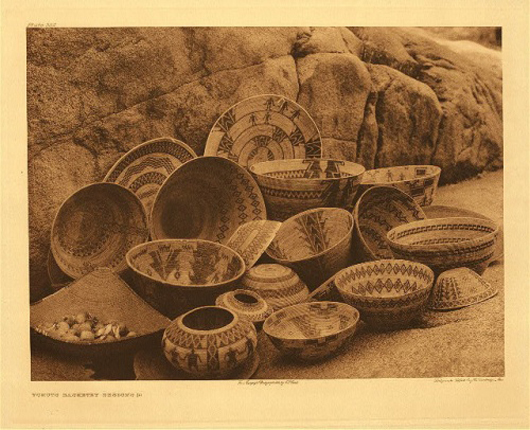 Curtis also performed the valuable service of documenting native arts and crafts being made in the early 20th century. This selection of patterned baskets is one of 40 Curtis photographs used to illustrate ‘Weavers of the Earth: Native American Baskets,’ an exhibition through May 12 at the Memphis Pink Palace Museum. 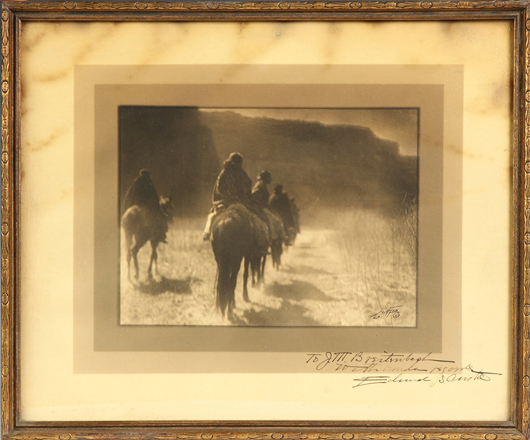 ‘The Vanishing Race,’ a photogravure image from ‘The North American Indian,’ with the autograph signature of its photographer Edward S. Curtis in the right corner brought an $1,800 hammer price at Cottone Auctions in March 2012. Courtesy Cottone Auctions.