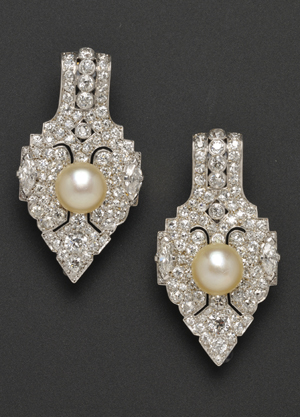 Lustrous in appearance and smooth to the touch, pearls top collectors’ wish lists because they are perfect for any occasion. Gloria Lieberman, head of Skinner’s jewelry department, sums it up: “Pearls are always correct. When you don’t know what to put on, you put on pearls.”

Pearls transcend politics as well. Both Michelle Obama and Cindy McCain wore pearls when they accompanied their husbands on the 2008 campaign trail. In the past two years, Mrs. Obama has made them a favorite fashion accessory in the first lady’s wardrobe.

Over 500 years ago, pearls were an important part of the treasure found in the Americas by the first explorers. Christopher Columbus discovered an abundant source off the coast of Venezuela in 1498.

From England to Russia, European royalty had a voracious appetite for the seaborne gems. News of an American pearl supply was greeted with enthusiasm back home, in part because it freed jewelers from their previous dependence on imports from Asia.

The most famous American pearls received special titles. “La Peregrina” – discovered off the coast of Panama or Venezuela in the mid-1500s – ended up in the Spanish royal treasury. A suitable match was found and the two pearls were made into earrings for the queen.

This tale is only one of the fascinating historical vignettes related in Tiffany Pearls (Abrams 2006), an excellent reference by John Loring, now design director emeritus of the famous jewelry firm. One illustration is the famous circa 1588 portrait of Elizabeth I of England. Large pearls outline her famous red hair, decorate the royal robes, and hang in multiple ropes around her neck.

In an interview before his retirement, Loring said, “When people see those historic portraits in museums of women covered with pearls, they think they are Oriental pearls, but they’re not – they’re American. Pearls enjoyed enormous popularity with painters because they were really the only gem that a painter could render accurately.”

He continued, “Pearls through much of their history were more highly prized than diamonds, so people took remarkable care of them. Queen Elizabeth II still wears some of the Hanoverian pearls from time to time. The Pope gave them to Catherine de’ Medici when she married the Dauphin who became Henry II, and she then gave them to Mary Queen of Scotts, who sold them to Elizabeth I.”

Leslie Field devotes an entire chapter to England’s royal pearls in her 1987 book on The Queen’s Jewels: The Personal Collection of Elizabeth II. The young Princess Elizabeth wore a pearl necklace – a gift from her father King George VI – when she married Prince Philip in 1947. The monarch has continued to favor pearl jewelry throughout her long reign.

During the 18th and 19th centuries, American women were particularly fond of jewelry set with hundreds of tiny seed pearls. The Peabody family pearls, now in the Peabody Essex Museum in Massachusetts, include a floral necklace, earrings, and multiple brooches made in 1845.

In an 1861 photograph by Matthew Brady, Mary Todd Lincoln is wearing a set of seed pearl jewelry purchased by Abraham Lincoln from Tiffany’s. This image and many others appear in the pearl chapter of Martha Gandy Fales’s definitive reference Jewelry in America, 1600-1900.

“Pearls traditionally were associated with purity and love,” she writes, and then continues, “Sets of seed-pearl jewelry, imported from England or made in America, became fashionable as wedding gifts to brides.”

This country’s fascination with pearls continued into the 20th century. Certainly no grand dame’s outfit was complete without waist-length strands of natural pearls. In 1902, Tiffany sold oil and railroad magnate Henry Morrison Flagler a notable pearl necklace for the then unheard-of price of $2 million, about $40 million in today’s dollars.

The pearls of Anna Thomson Dodge, who married into the auto family, were sold at Bonham’s in December 2008 for $600,000. Created by Cartier circa 1920, the three-strand necklace was composed of 224 pearls.

In March of this year, Skinner’s sold a double strand necklace of 154 semi-baroque pearls with a diamond clasp for $88,875 and a single strand for $71,100. Gloria Lieberman pointed out, “We had some very pretty natural pearls from old families, and the market is very heated for those things. Anything that’s a natural pearl just flies. The value depends on the quality, the size and the luster – how beautiful they are, how they reflect light. A beautiful natural pearl reflects light differently; it has a lot of depth.”

She continued, “One of the things we shouldn’t forget, in the first decades of the 20th century, we begin to see some wonderful cultured pearls. We just had a double strand in a sale we sent off to GIA [Gemological Institute of America] to have them tested to see if they were natural or not, we couldn’t tell. They were really that lovely.”

The perfection of the cultured pearl process is often credited to Japanese entrepreneur Kokochi Mikimoto. Pearls are created when the oyster coats a foreign irritant with layers of lustrous nacre. Pearl production can be encouraged by introducing irritants into the oyster’s insides. Lieberman added, “And of course the longer they left the pearls in the oyster, the thicker the nacre and the more lustrous the pearl.”

Whether natural or cultured, pearl quality and size determine the value. Lieberman says, “We see a lot of natural pearls that are small graduated strands from 3 mm to 7 mm. Once you get into a 4 mm to 9 mm, the price jumps.”

Lieberman has no trouble picking a favorite pearl lot in past auctions. In March 2000, Skinner sold a late 19th-century Tiffany brooch for $60,500 with buyer’s premium. The piece was designed by one of the firm’s most famous artists, Paulding Farnham, who enjoyed mixing pearls and gems of various shades.

“The brooch was made in the Indian style, very maharajah looking. There was a hot pink sapphire in the center, and it had natural colored pearls in different shades and colored diamonds. Paulding designed using nature’s palette,” she said.

Although Tiffany had many of the designer’s drawings for jewelry, the whereabouts of this particular brooch were unknown until it surfaced in the Skinner sale. Tiffany purchased the rediscovered work, and it appeared as the back cover image on the reference Paulding Farnham: Tiffany’s Lost Genius by John Loring (2000). 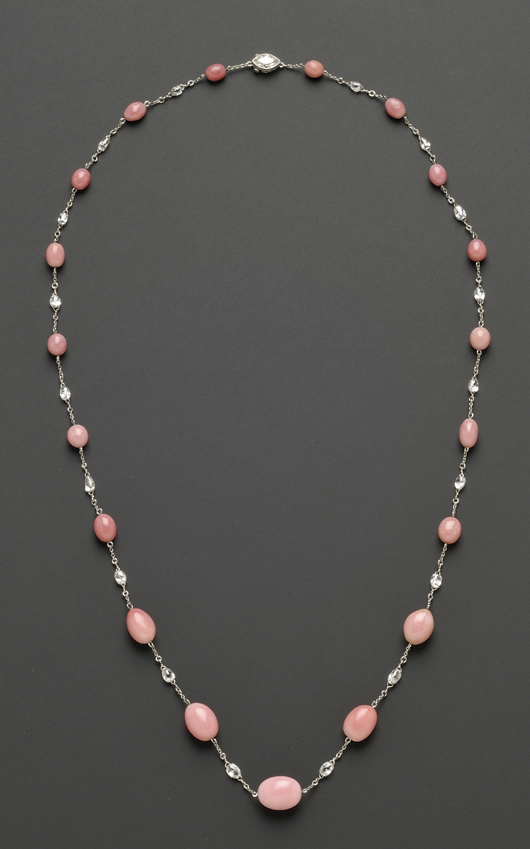 Found in varying shades of pink, conch pearls are formed naturally in the shell of the queen conch, which is found in the Florida Keys and Bahamas. A necklace, featuring 19 graduated conch pearls spaced with diamonds, sold in March for $51,000. Image courtesy of Skinner Inc. 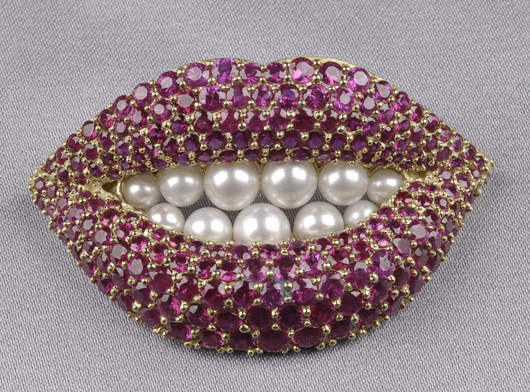 Designed by Salvador Dali and executed by jeweler Henry Kaston, this 18-karat gold ‘Lips’ brooch sold for $13,035 earlier this year. Noting that poets dream about ruby lips and teeth like pearls, Dali turned the fantasy into reality. Image courtesy of Skinner Inc. 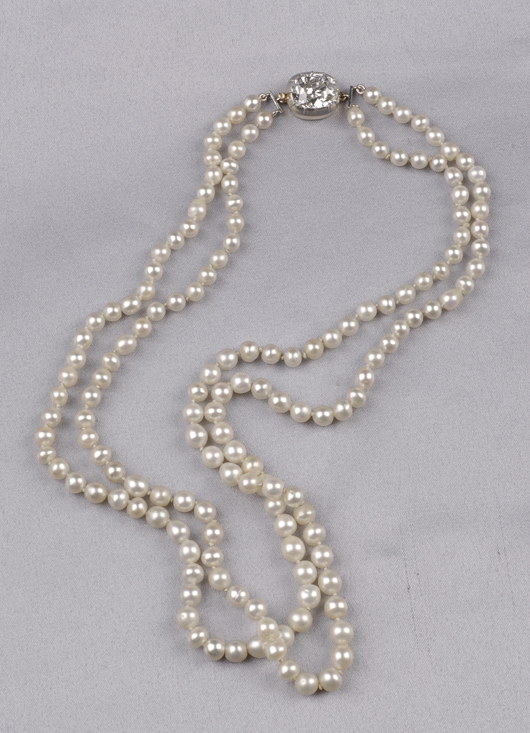 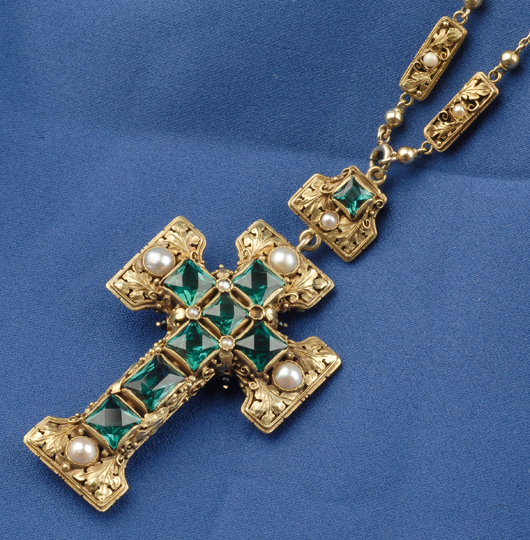 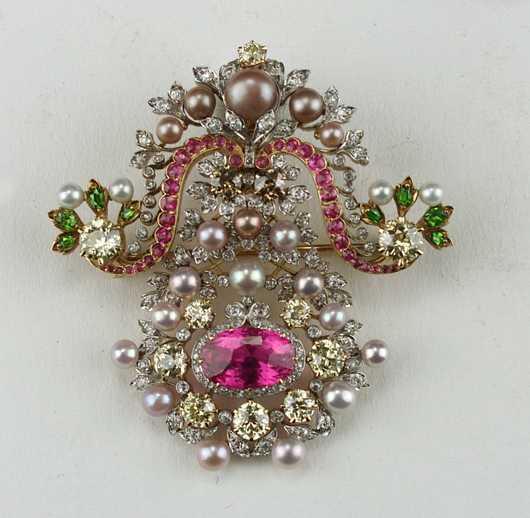 Once known only from the artist’s drawings, this Tiffany brooch designed by Paulding Farnham in the late 19th century is set with colored pearls and gemstones. Skinner sold the work back to the Tiffany archives in 2000 for $63,000. Image courtesy of Skinner Inc.