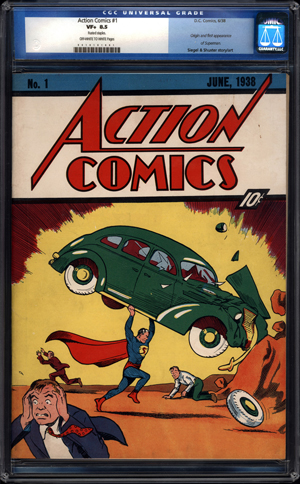 This copy of Action Comics #1, featuring the first appearance of Superman, is graded 8.5 out of 10. It is, to date, the most expensive comic book ever sold, having been purchased from ComicConnect.com for $1.5 million in March 2010. Image courtesy of ComicConnect.

The enormous attention focused on the four-color world continued when just three days later a CGC-certified 8.0 copy of Detective Comics #27, the May 1939 first appearance of Batman, became the second seven-figure comic book when it sold for $1,075,500.

Then, little more than a month later, a CGC-certified 8.5 copy of Action Comics #1 sold for $1.5 million, reclaiming the record for Superman and setting a mark not likely to be beaten in the short term.

“Mainstream media sources were really taken with the story, but too many of them made the perceived novelty of the high-dollar sales the core of their stories. They did this in much the same way that some journalists still start stories with leads like ‘Pow! Bam! Zap!’ inspired by the mid-1960s Batman TV show. That series was more than 40 years ago. In the case of some of the current reporting, their perceptions are equally out of date,” said Robert M. Overstreet, author of The Overstreet Comic Book Price Guide.

Overstreet said scarcity, condition, popularity of the character(s) and demand for the particular issue are significant factors in determining the prices for such comics. And the “condition” part of that equation is hard to overstate.

The arrival on the scene a decade ago of Comics Guaranty (or CGC), as an independent, third-party grading company significantly reduced the appearance of subjectivity. CGC’s presence coincided with the development of a thriving auction market.

“For a long time we have viewed breaking into the seven-figure range as a matter of when, not if. The comic market has a long track record to support this,” Overstreet said.

“Heritage just sold a 1913 Liberty Nickel for $3.7 million,” said Barry Sandoval of Dallas-based Heritage Auction Galleries, which sold the $1,075,500 Detective Comics #27. “If an item near the top of the ‘hobby of kings’ is worth that, why shouldn’t an item near the top of our hobby be worth $1 million-plus? Particularly since the man in the street could tell you a lot more about Batman than about the 1913 nickel. I remember the Damien Hirst artwork with a bull submerged in formaldehyde that sold for $18 million. If you had $18 million to spend, you could put together one of the very best comic collections in the world, even at today’s prices!”

Vincent Zurzolo of New York-based ComicConnect.com saw the seven-figure range coming, but still said comic books, as an investment, are in their infancy compared to other collectibles.

“Compared to antiques, fine art, sculptures and jewels, vintage comic books are extremely inexpensive,” Zurzolo said. “Even making comparisons to similar type collectibles like baseball cards, coins and stamps, we find comic books as a rather inexpensive collectible with comic books being the last to break the million dollar mark,” he said.

Both auction houses, as well as a number of their competitors, can point to a string of record prices through 2009 and the first quarter of 2010. Heritage, for instance, recently brokered the sale of a CGC-certified 9.6 Flash Comics #1 for $450,000. In 2006 they had sold it to the seller for $273,125. ComicConnect can tout a string of record-setting sales of Action Comics #1, among others.

Some collectors and dealers have suggested that while there is solid or even dramatic progress at the high end, the middle of the market has seen tougher going. The notion is that mid-level comics sell, but one has to work harder and sell for a bit less.

“I think that’s true,” Sandoval said. “A Very Fine [or 8.0 copy of] Incredible Hulk #181 is a great book to have, but 1,000-plus nicer copies exist, and our clients know it. 1970s comics really soared for a while a few years back, but the high prices flushed out many, many copies.”

A decade of strong box office and DVD performances by comic book properties have boosted the general public’s awareness and to some extent driven media coverage of the record prices that have been paid for vintage, rare, high-grade issues, particularly in light of their performance in dicey economic times.

Overstreet suggests that the bullish market could continue for some time, but always adds a note of caution. Comic books have a very strong record over a very long period, he said. Just be careful if people start thinking prices can’t come down. They said that about housing prices, too. 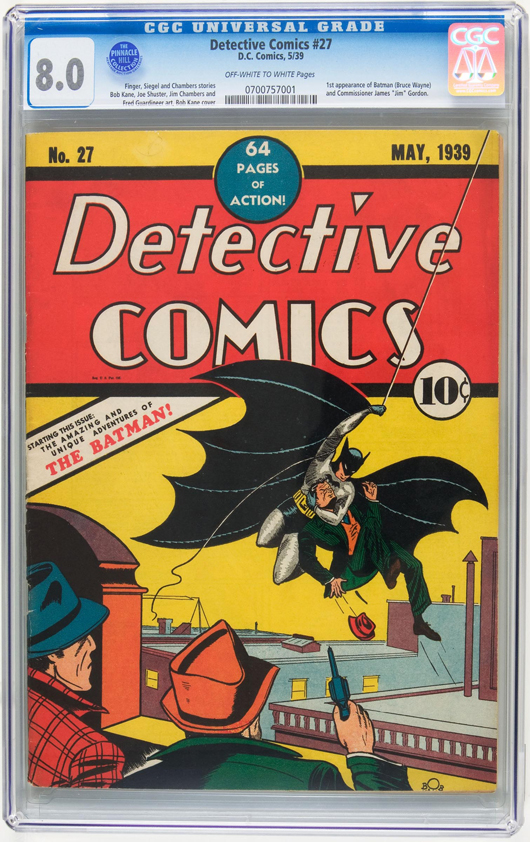 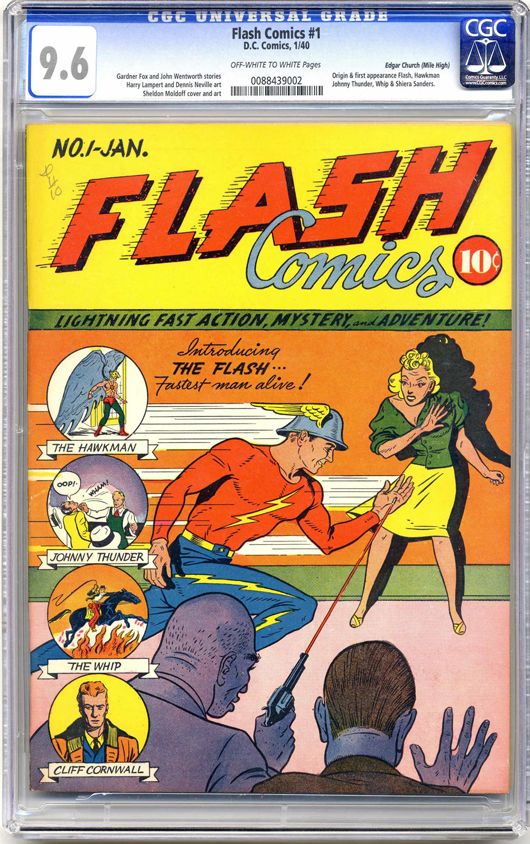 Cover dated January 1940 and graded an unusually high 9.6, this first appearance of The Flash comes from the Edgar Church (or Mile High) pedigree collection. It sold for $450,000 in March 2010 after previously selling for $273,125 in January 2006. Image courtesy Heritage Auction Galleries. 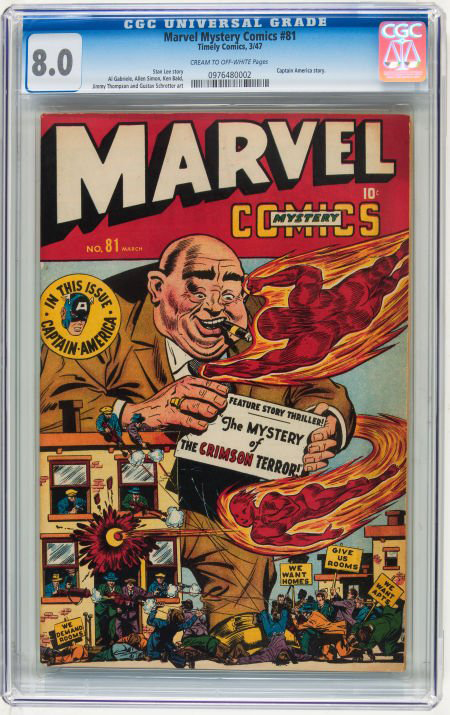 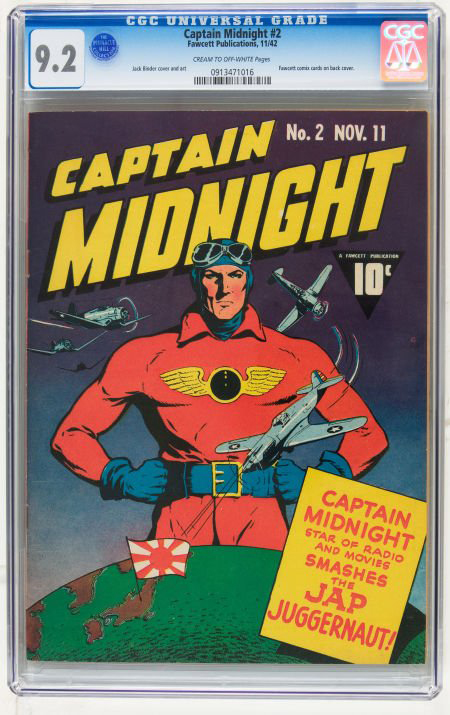 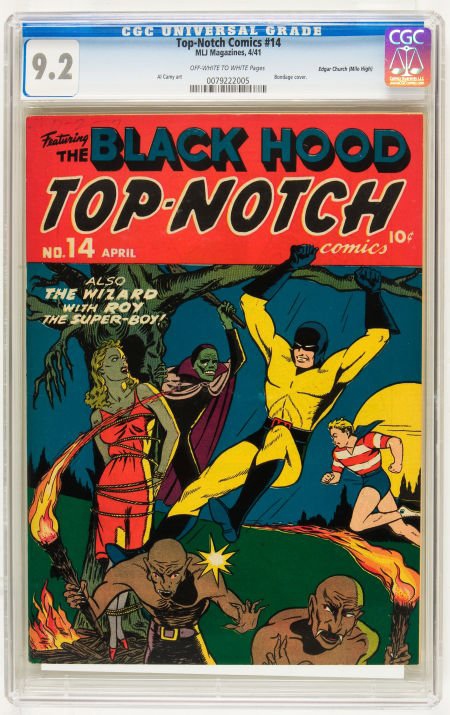