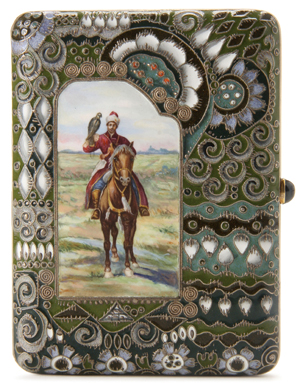 This silver-gilt Faberge cigarette case with an inscription dated 1913 sold for $120,000 in last November’s highly successful offering of Russian art at Jackson’s. The cover bears an image of the Tsar’s Falconer after a painting by Franz Rouband (1856-1928). Courtesy Jackson’s International Auctioneers.

The technique of enameling, in which colored ground glass is fused to metal by firing, dates back to ancient times. Although originally devised as a substitute for precious or semi-precious stone inlays, enameling became a highly-sophisticated art form in its own right.

Many countries produced fine enamel works, but the workshops in Russia – especially those of the 19th and early 20th century – created vividly colored examples that are eagerly sought-after by collectors. The country stood at a cultural crossroads, absorbing influences from East and West.

The catalogue Russian Enamels: Kievan Rus to Faberge, which accompanied a 1996-1997 exhibition mounted by the Walter Art Museum in Baltimore and the Hillwood Museum in Washington, is a classic reference for collectors. The volume includes examples ranging from a Greek 2nd century B.C. bracelet found in the Crimea to precious treasures from the workshops of Carl Faberge.

The late Anne Odom, then Chief Curator at Hillwood, wrote: “The quintessentially ‘Russian’ enamels were the result of a melding process that had been going on for centuries, mixing Turkish, Persian, and Western styles that had entered the Russian design vocabulary in the 17th century. By the end of the 19th century they had been fused into a style that today is popularly recognized as Russian.”

Collectors and connoisseurs of enamels have a lot to celebrate. In addition to works in the permanent collections of the two museums, the exhibition mentioned above included loans from a mysterious private collection. This source has recently been revealed as the collection of Jean Montgomery Riddell, who passed away in 2010 at the age of 100.

The Riddell collection – more than 260 examples of enameled Russian silver – has been bequeathed to Baltimore’s Walters Art Museum. A case of representative pieces, including the tankard illustrated here are already on display, and the museum plans a touring exhibition with catalogue within the next few years.

William Johnston, Walters’ Senior Curator at Large, wrote the introduction to the 1996 catalogue and is now working on the Riddell project. The curator met Mrs. Riddell many years ago, when she came to the museum. He remembers, “The Walters is quite strong in Russian decorative arts, including enamels, silver, and ivories. I took her around, and she asked if we would be interested in her collection. We went down to her apartment in the Washington, D.C. area and she showed me around, and then we kept in touch over the years.”

The collector’s husband, Richard J. Riddell, had begun to collect Russian enamels during his work for the United States government. With his collection as a foundation, Jean Riddell began to enlarge her holdings through acquisitions from well-known dealers at home and abroad.

Johnston continues, “Jean Riddell formed what was regarded as the largest collection anywhere of Russian enamels. She bought a few earlier representative pieces from the 17th and 18th centuries, and she also bought some St. Petersburg Faberge. But what she concentrated on were the Moscow enamels of the late 19th century and the early 20th century.”

These Moscow pieces include tea wares and boxes decorated with traditional Russian motifs by noted artisan Feodor Ruckert, exquisite painted plaques from the Stroganov Institute, a striking kovsh made by Ivan Khlebnikov, and plique-a-jour pieces from the firm of Pavel Ovchinnikov. The Russian Enamels catalogue recommended above has an excellent glossary which explains complex enameling techniques such as champlevé, cloisonné, filigree, and plique-a-jour.

Auction prices for these enamels have soared in recent years, as wealthy Russians have actively participated in the international market. When Soviet politicians were more concerned about factories and harvests, decorative arts flowed to Europe and the United States. Now western collections formed in the 20th century are coming up for sale, and Russian buyers compete vigorously to buy back fine examples of their national heritage.

Jackson’s International Auctioneers in Cedar Falls, Iowa has become an outstanding player in the global market. One of the firm’s specialties is Russian material including icons, porcelain, silver, and enamels. Their November 2011 auction totaled $4.5 million, thanks in part to a miniature Russian triptych of the Kazan Mother of God, which sold for $240,000.

Stars among the enameled lots included a silver-gilt box with a painting of a warrior on the cover, marked by Feodor Ruckert of Moscow, 1908-1917, which sold for $132,000, and a hexagonal box of the same period from Faberge’s Moscow workshop decorated with a portrait Tsar Ivan which brought $84,000.

James L. Jackson, the auction house’s president, has become an expert in the Russian market. He notes that small treasures like the personal icons and decorated boxes are highly prized by Russian buyers, not only as additions to their own collections but also as gifts to friends.

He explains, “Believe it or not, these are the kind of things they give – something small and portable. When you have that much wealth, what is $100,000 here or there? He acknowledges that the Russian market has become an important part of Jackson’s business: “That’s been growing and growing and growing. Fifteen or twenty years ago, there were very few people who could speak fluently about Russian icons and knew the major players – collectors, sellers, dealers, museums, what have you.”

Having catalogued so much Russian material, Jackson finds he has become the go-to man on the subject: “The fruit that it bore was that people of every ilk – major collectors, museums, universities – began to call me, because I’m of the old school where you share knowledge. There are some serious American collectors, to be certain, but I would say all of the major works in the last sale went back to Moscow and St. Petersburg.”

Jackson is already looking forward to the next sale of Russian material on May 22-23, 2012, which will include important material from private collections including more icons from Dr. John Sinsky. LiveAuctioneers.com will provide the Internet live bidding.

Meanwhile, collectors can follow the progress of the exhibition of the Riddell bequest at www.thewalters.org. Enthusiasts also can look forward to the Hillwood Museum’s upcoming exhibition, “The Style that Ruled the Empires: Russia, Napoleon, and 1812,” on view February 14-June 2, 2012. Copies of the Russian Enamels catalogue are available at www.hillwoodmuseumshop.org. 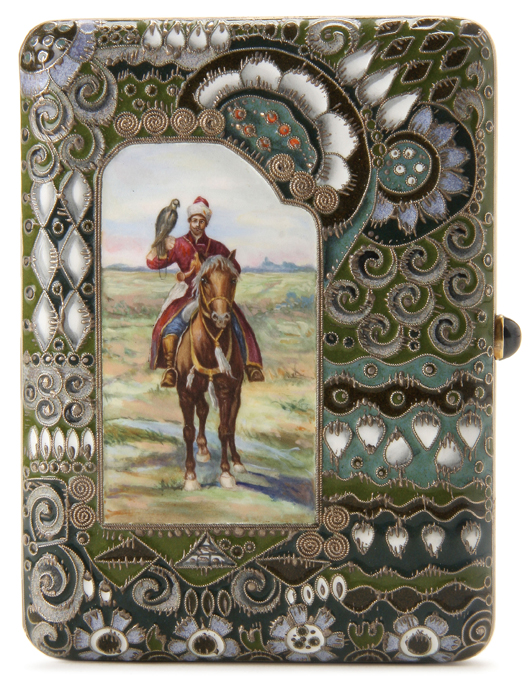 This silver-gilt Faberge cigarette case with an inscription dated 1913 sold for $120,000 in last November’s highly successful offering of Russian art at Jackson’s. The cover bears an image of the Tsar’s Falconer after a painting by Franz Rouband (1856-1928). Courtesy Jackson’s International Auctioneers. 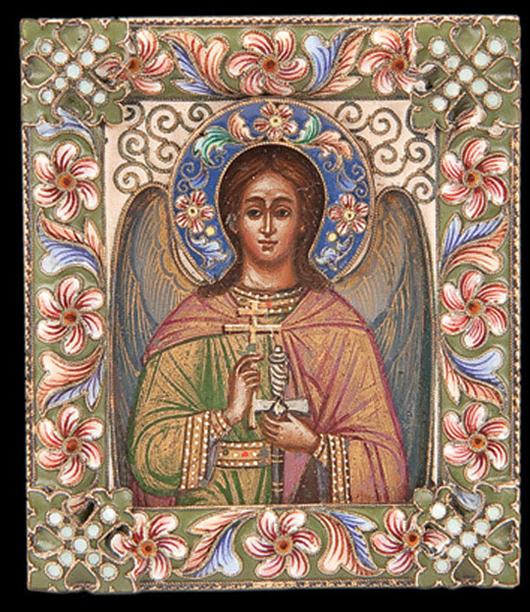 Only two and a half inches high, this personal icon of a guardian angel was made by the distinguished Moscow workshop of Feodor Ruckert, 1899-1908, and was sold in 2010 for $36,000. Courtesy Jackson’s International Auctioneers. 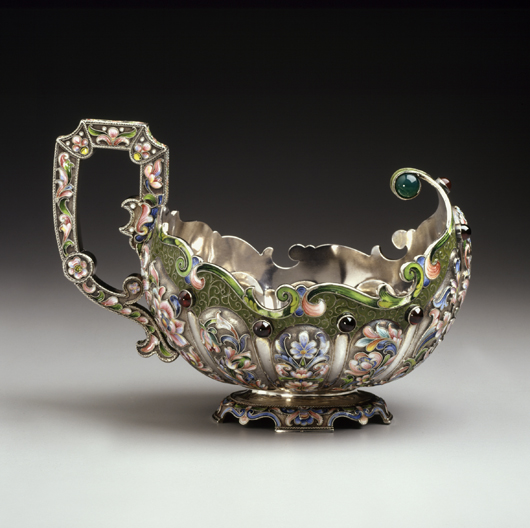 The Hillwood Museum in Washington, D.C., is filled with Russian treasures gathered by wealthy collector Marjorie Merriweather Post. Among the enamels is this magnificent kovsh made in the early 20th century by Mariia Semenova, who took over her father’s workshop in Moscow. Courtesy Hillwood Museum. 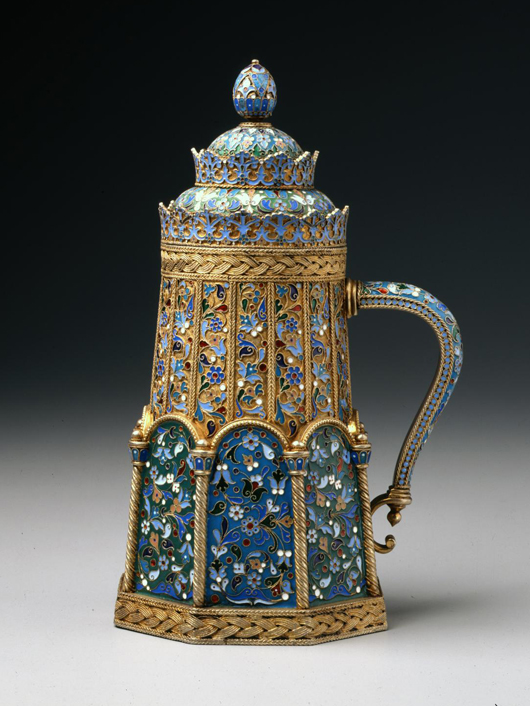 This tankard made by the Moscow firm of Pavel Ovchinnikov, 1888-1896, is part of the Jean M. Riddell collection of over 260 Russian enameled objects recently given to the Walters Art Museum in Baltimore. Collectors can look forward to a catalogue and traveling exhibition of the works. Courtesy The Walters Art Museum.

This tall gilded silver covered cup is decorated with double-headed Imperial eagles. The masterwork, bearing marks for a Moscow workshop circa 1885, brought $105,600 at Jackson’s May 2010 sale. Courtesy Jackson’s International Auctioneers. 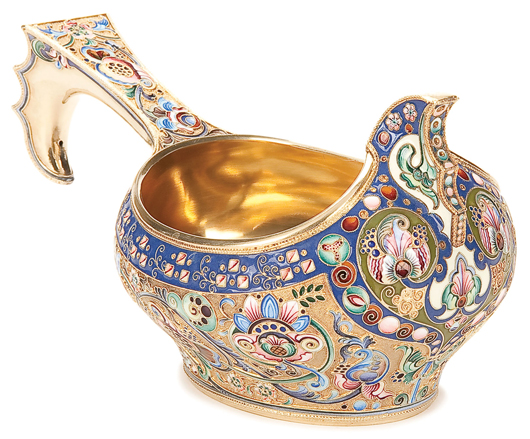 This fine silver-gilt kovsh with shaded enameling in the Pan-Slavic taste, Moscow 1908-1917, brought $26,400 when Jackson’s sold the lifetime collection of Dr. James F. Cooper in May 2010. Courtesy Jackson’s International Auctioneers. 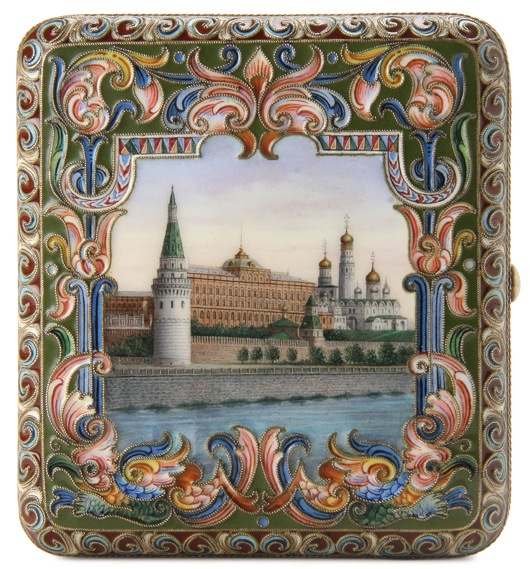