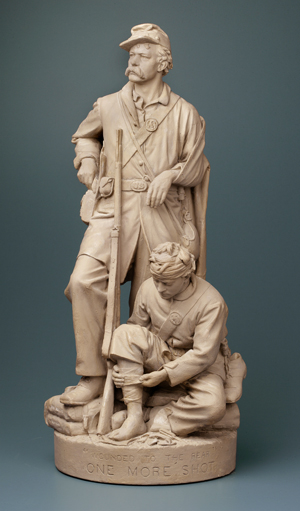 After the Civil War, Rogers’ scenes of army life proved popular with veterans. ‘Wounded to the Rear, One More Shot’ from 1864 offers a glimpse of courage under fire. A number of Civil Wars groups will be offered in the Sept. 10 sale at Fontaine’s Auction Gallery. Image courtesy of New-York Historical Society.

John Rogers (1829-1904) was that rarest of all phenomena, a successful artist. He sold over 80,000 sculptural compositions, mass-produced in painted plaster, during the second half of the 19th century. While only the wealthiest families could afford marble or bronze works of art, middle class households could purchase a graceful “Rogers Group” for $10 or $15.

More people became aware of fashions in home décor through the new medium of photography. Books appeared with recommendations for tasteful interior design. The accompanying photos of parlors and dining rooms always included sculpture—large or small—carefully arranged on pedestals, mantels and sideboards.

Born in Salem, Mass., Rogers’ skill as an artist emerged when he was working as a mechanic and draftsman in his twenties. He had begun modeling in clay and was further inspired by the sculpture he saw at an international exposition in 1853. Following the course of many aspiring artists, he set sail for study in Paris in 1858.

While studying abroad, he realized that neoclassicism was not his style. When he returned to the United States the following year, he began to achieve success by producing genre scenes from everyday life, a specialty he would make his own.

The genre tradition in painting had been established by artists such as William Sidney Mount and George Caleb Bingham. An excellent sculptor, Rogers was able to produce the same effect in three-dimensional figural groups. In 1863, he was elected a full member of the National Academy of Design where he often exhibited his compositions.

The New-York Historical Society has organized a traveling exhibition, “John Rogers: American Stories,” which includes many pieces from their permanent collection. The exhibition is on display at the Dixon Gallery & Gardens in Memphis through Oct. 9. The final venue will be in New York City at the newly renovated New-York Historical Society building Oct. 19, 2012 through Feb. 17, 2013.

Collectors will enjoy the wealth of information provided by the accompanying catalog, which features a timeline of the artist’s career. In the opening essay, Michael Leja writes, “The middle decades of the 19th century marked a watershed in the development of a mass market for images in the United States, and Rogers was more influential than any of his contemporaries in bringing sculpture into this new marketplace.”

“He was, in other words, a key player in the invention of a mass visual culture, and his oeuvre reveals the technical and aesthetic challenges entailed in this momentous remaking of art. To our present vantage, when the hyperproduction and instrumentalization of images continue to rise to new levels, Rogers’ career presents an illuminating historical case study.”

Roger’s subject matter is often sentimental or humorous, as was often the case with Victorian art works. In a popular group from 1875 – Checkers Up at the Farm – a young man laughs as he beats an older relative at the game, while a young mother and child look on. Consumers would recognize the familiar scene and take it home with a smile.

Rogers also reproduced scenes from Shakespeare and popular fiction of the day. Courtship in Sleepy Hollow: Ichabod Crane and Katrina Van Tassel dates to 1868. You are a Spirit, I Know; When did you Die? is a four-figure group from King Lear made in 1885.

The beginning of Rogers’ career coincided with the Civil War years, and the artist from the North was a staunch Abolitionist. Many of the groups simply recorded daily life on the front – The Picket Guard of 1861 or Wounded to the Rear: One More Shot from 1864 – and were popular with veterans and their families.

Other themes had more political overtones. An 1868 photo of the parlor of Gen. Ulysses S. Grant’s home in Galena, Ill., contains two Rogers Groups. The Council of War depicting Grant at President Lincoln’s side stands near the window. On the mantel is a family composition titled Union Refugees (1863) which shows a young couple and their child fleeing the South because of their loyalty to the Union.

Today, Rogers is particularly celebrated for his accurate and heroic depictions of African-Americans in the war years. One of the artist’s earliest groups, The Slave Market of 1859 shows a defiant black father being sold apart from his grieving family.

The most groundbreaking group, however, is Wounded Scout: A Friend in the Swamp (1864), which presents a black freedman helping a wounded soldier through difficult terrain. Modern eyes, accustomed to multicultural sculptures, such as The Soldiers by Frederick Hart at the Vietnam War Memorial in Washington, D.C., may not realize how radical the Rogers’ image was in its day.

Ellen Daugherty, associate professor at the Memphis College of Art, recently lectured in conjunction with the traveling exhibition. She said, “The thing that Rogers does so well is create a little moment, a visual anecdote in time. He tells some of the story and you’re allowed as the viewer to weave the rest of it, to decide how to complete the narrative. He opens up his potential audience rather than shutting them down.”

Daugherty is an expert on the portrayal of African-Americans in 19th and early 20th century art. In discussing the Wounded Scout, she noted, “Any type of art that depicts the humanity of African-Americans at this time period is rare. This black man is kind, helpful, and someone the wounded soldier can lean on in times of trouble.”

“The thing that makes it quite powerful is the touch – the way that Rogers puts the two figures together. The black man holds the soldier’s arm so tenderly; he exhibits characteristics of nobility, humanity and concern for his fellow man.”

Collectors can still find affordable examples of Rogers’ “Sculpture for the People” for sale in the antiques marketplace. Fontaine’s Auction Gallery in Pittsfield, Mass., will offer a one-owner collection from the South of about 55 groups in their Sept. 10 sale. Among the lots offered will be Civil War themes such as The Council of War and Union Refugees, theater scenes, and depictions of home life.

Jim O’Brien at Fontaines says, “It is wonderful for us to have the opportunity to sell such a large and diverse collection. We typically only see two or three groupings in the course of a year; so to see many of the rarer groupings all at once is a treasure.”

“Rogers’ studio in New Canaan, Conn., has been designated a National Historic Landmark. John Rogers is credited with being a pioneer in the making of elastic molds for works of art. He patented many of his works, displaying the dates on the base of the sculptures.”

O’Brien adds, “Rogers’ sculptures are very popular among collectors. When looking at any given piece, you can really get a feel for what life was like in the 1800s. The realistic qualities of his works are amazing; Rogers was an expert in not only duplicating realistic features of his subjects, but he also was a master at capturing movement and intimate scenarios in everyday life.”

Starting bids on the Fontaine lots start as low as $200. Note that condition affects value for the easily damaged plaster groups. Rogers also made durable master bronzes to use as his models. Many of these are included in the New-York Historical Society exhibition, but they rarely appear on the market.

Certain groups were copied by 19th-century English potteries in Parian porcelain. These were apparently not authorized by Rogers, but they are attractive and often bring four-figure prices at auction. 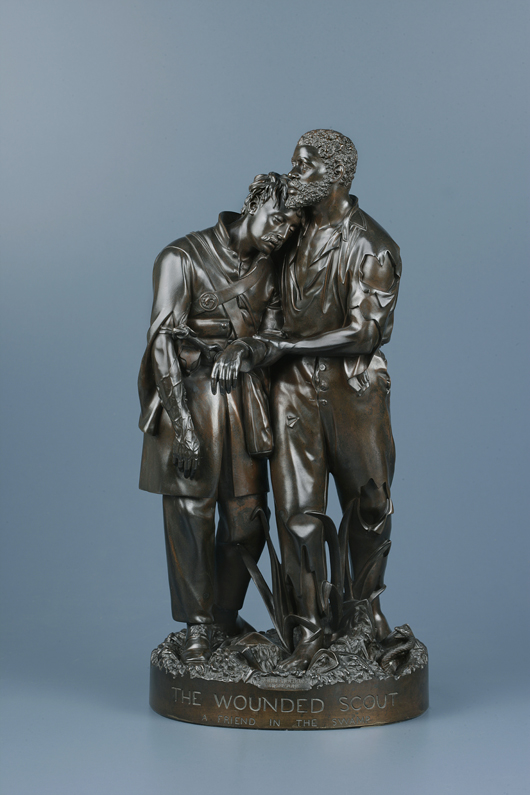 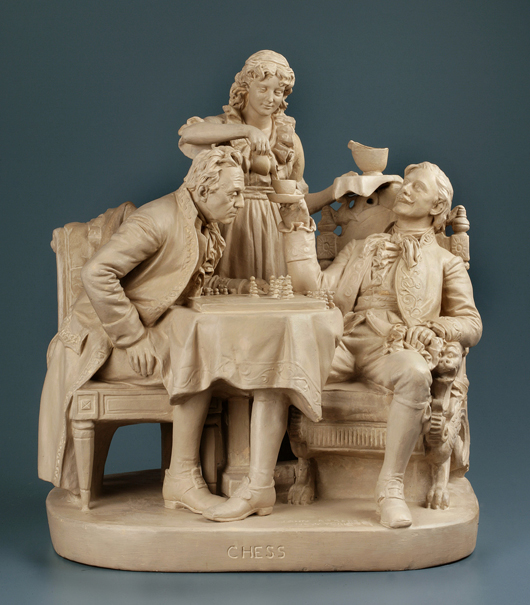 Rogers was well-known for his gently humorous genre scenes from daily life. Two of his best-selling groups were ‘Checkers Up at the Farm’ (1875) and the two men playing ‘Chess’ (1889) shown here. Image courtesy of New-York Historical Society. 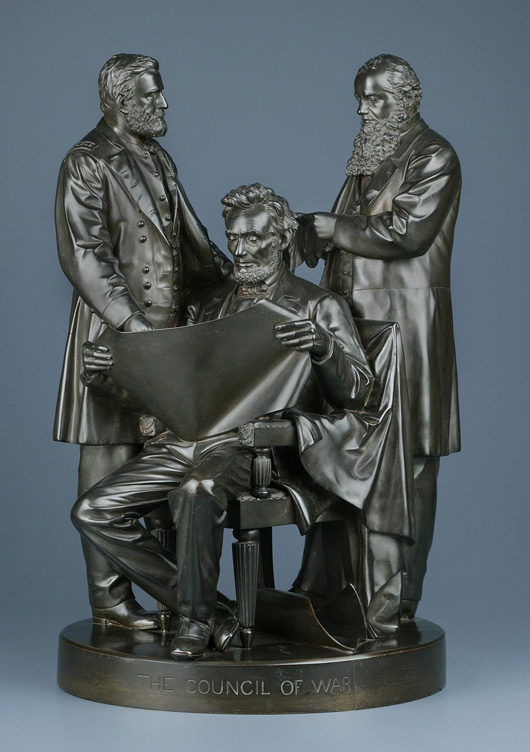 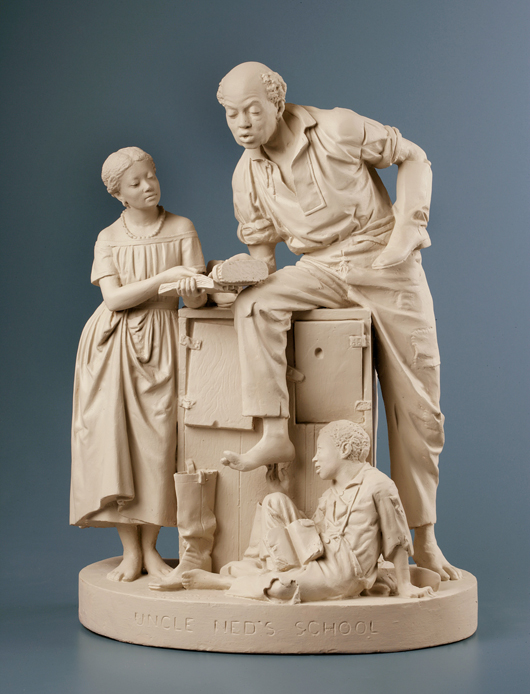 ‘Uncle Ned’s School,’ designed in 1866, depicts a black workman and young relatives learning to read, a skill denied to slaves before emancipation. An edition of this design is part of the collection offered at Fontaine’s. Image courtesy of New-York Historical Society.