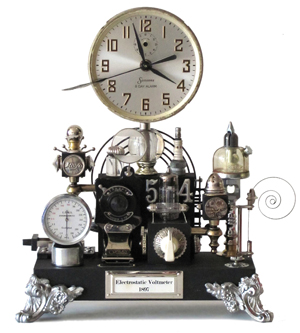 Steampunk – a term used as a noun, an adjective, and a verb – may mean different things to different people. In interior design, it denotes a twist on turn-of-the century industrial pop culture. Innovative collectors repurpose and transmute basic elements of 19th-century technology – gears, boilers, windup mechanisms – in a way that integrates modern amenities with a Victorian period environment.

Inventors become involved in the process, because no one can buy a “steampunk antique.”

Vintage elements are the basic material, but it takes creativity to turn a pump organ into a computer workstation. Craftsmen often specialize: view Roger Wood’s fantastic timepieces – for example, his “Nemo’s Steampunk Clock/Electrostatic Voltmeter” – at www.klockwerks.com.

Philadelphia inventor Jack Zylkin of USB Typewriter adapts old-fashioned manual typewriters for use as keyboards on any USB-capable computer. He says, “I wouldn’t call myself a steampunk – I don’t dress up with a monocle and a bowler hat – although I think that kind of fashion is cool. For me, it’s about the spirit of industriousness and inventiveness. I think people respond to it because it’s not mass-produced. What I do is high tech, but it’s a personal kind of high tech.”

For adventurous dressers, Steampunk can become an elaborate masquerade, where participants turn themselves into fully costumed avatars with an alternative lifestyle.

Devices and interiors become the background for a distinctive Victorian fashion aesthetic that mixes lush fabrics with Goth accents and military gear. Websites like Steampunk Emporium have sprung up to supply everything from monocles and pith helmets to corsets and lace-up boots.

Fashion designers like Philadelphia’s Nikki Cohen of MayFaire Moon Costumes & Corsetry find their creations in demand. She says, “In the last two or three years, Steampunk has been one of the major movements in the alternative world. I’ve always loved Victorian costuming. Moving on from very strict historical accuracy to you-can-do-whatever-you-want has been wonderful. It’s like being handed a whole new box of crayons.”

Costumed neo-Victorians network through websites like www.thesteampunkempire.com, which is subtitled “The Crossroads of the Aether.” Events cited range from museum exhibitions to art shows to conventions. A Season 3 episode of the hit television series Castle featured a Steampunk costume party.

At its heart, Steampunk attempts to use Victorian technology for projects never actually realized during the 19th century. The insightful entry in Wikipedia says in its introduction: “Steampunk is a sub-genre of science fiction, alternate history, and speculative fiction that came into prominence during the 1980s and early 1990s. Specifically, steampunk involves an era or world where steam power is still widely used – usually the 19th century and often Victorian era Britain – that incorporates prominent elements of either science fiction or fantasy.”

“Works of steampunk often feature anachronistic technology or futuristic innovations as Victorians may have envisioned them; in other words, based on a Victorian perspective on fashion, culture, architectural style, art, etc. This technology may include such fictional machines as those found in the works of H.G. Wells and Jules Verne or real technologies like the computer but developed earlier in an alternate history.”

Collectors may read up on the movement and even dress up in the clothes, but questions remain. Where do I get the stuff? And how do I adapt it? Bruce and Melanie Rosenbaum remodeled the kitchen of their 1901 Sharon, Mass., house. Later, when people began to admire their stylish modifications, they realized they had been steampunking unawares.

In 2007, the Rosenbaums founded their website www.modvic.com, where viewers find images of their projects and links to articles and events. The couple built a steampunk kitchen at the Stella Pier Show in New York City last March. Bruce pointed out, “We’re looking at it as a creative design solution. For people who love the Victorian period and the Industrial Age but want to live in today’s world, this is where we come in. We blend the best of both worlds.”

As a source for vintage material to steampunk, Kamelot Auctions in Philadelphia has offerings that go far beyond the usual industrials and architecturals. Some are easy to repurpose – for example, a fabulous Victorian warming stove with cast-iron masque feet sold in April for $738. Others are nifty gizmos and gadgets just waiting for a new life. In the same sale, a vintage electrostatic machine with glass disc and tole canister, circa 1910, sold for $600.

Joe Holahan, a partner in Kamelot Auctions with Jeffrey Kamal, says, “What’s interesting about Steampunk is that historically – from a dealer perspective – the kind of dealer who would buy Victorian and the kind of dealer who would buy industrial have nothing in common. It’s interesting to see the two different profiles come together. I’ve never walked into a shop that called itself a steampunk store, but it’s cool stuff. I’ve been in the business for 25 years, and I’m always thinking, what’s next? So this makes sense – it’s stuff that’s been done, but it’s being reinvented in a new form.”

Jeffrey Henkel, Kamelot’s resident furniture and decorative arts specialist, says, “I happen to like all aspects of design and many different genres. Steampunk is something that’s been around for a long time and then the term became attached to it. The beginning of us going into steampunk was with metal vitrines made around 1900-1910. Those have been so popular for us; we’ve done very well with them.”

“Urban Outfitters began to buy them – that really was the beginning – they were usable objects in store for display. People would go in and buy a bohemian blouse and want these vitrines for their houses. We tried to develop a clientele that bought more unusual objects, and we’ve been fairly successful doing it.”

He concludes, “We’ve got the stock – we get things from all over the world. All the factories that closed over the years were full of all sorts of fabulous, crazy things, and we’ve been lucky enough to have them in our auctions. There’s a market for these objects, and it’s great. Young couples are buying these things as everyday useful objects.”

Watch for Kamelot’s Oct. 22 event which will offer a perfect mix of architecturals, industrials, and Victoriana. Catalogs of past and future sales can be found at www.kamelotauctions.com. The auction house is located at 4700 Wissahickon Ave. in Philadelphia: for more information, call 215-438-6990. 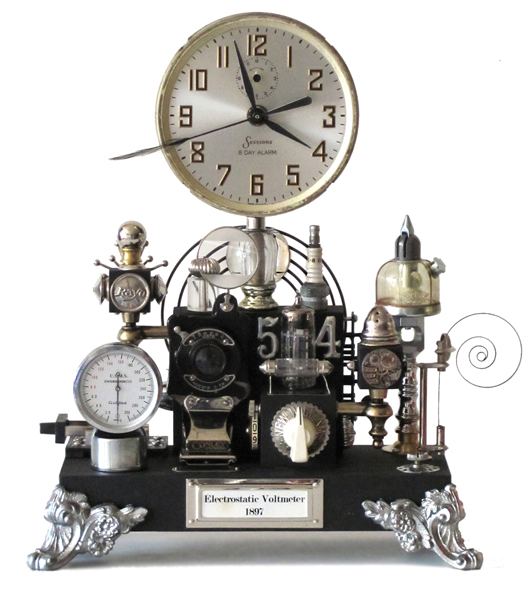 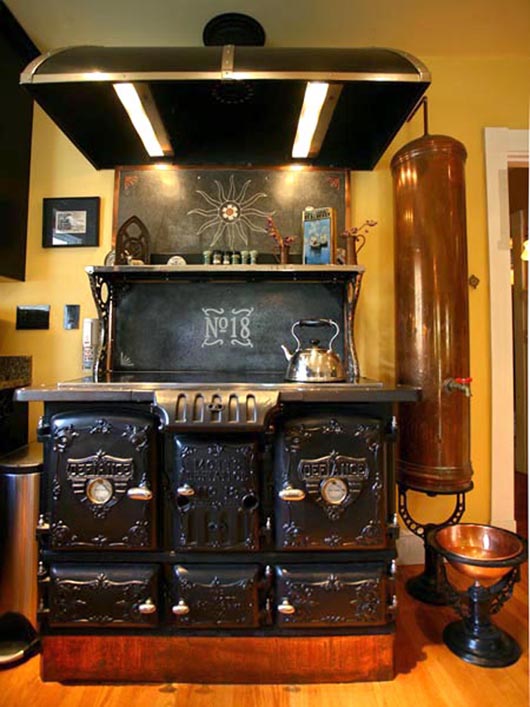 Bruce and Melanie Rosenbaum began steampunking as they were restoring their 1901 house in Sharon, Mass., and now share their expertise through their website www.modvic.com. In their kitchen, a modified 1890s J.L. Defiance stove has been updated with a glass cooktop and double ovens where the wood once burned. Image courtesy ModVic. 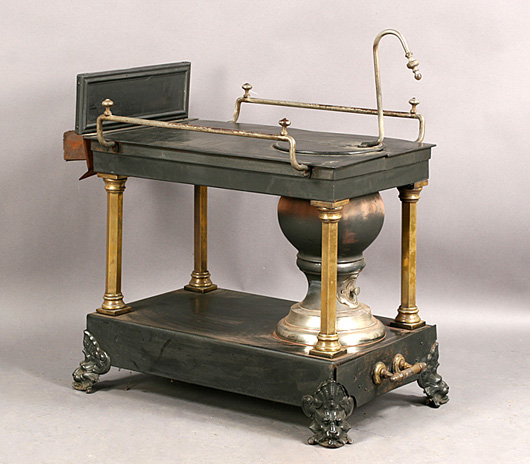 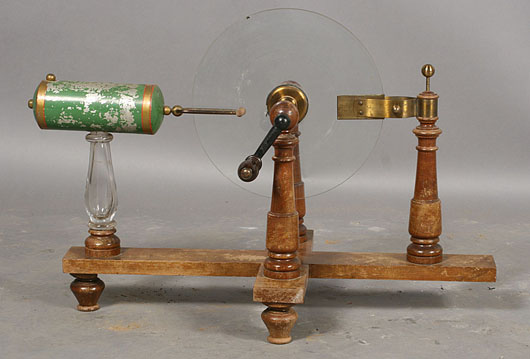 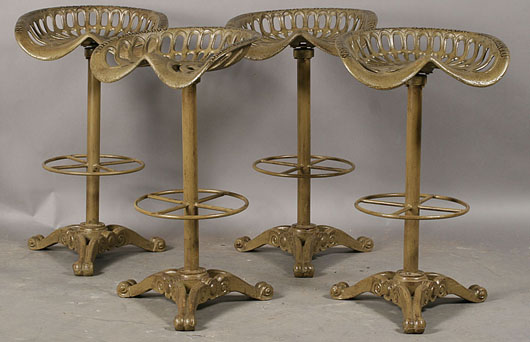 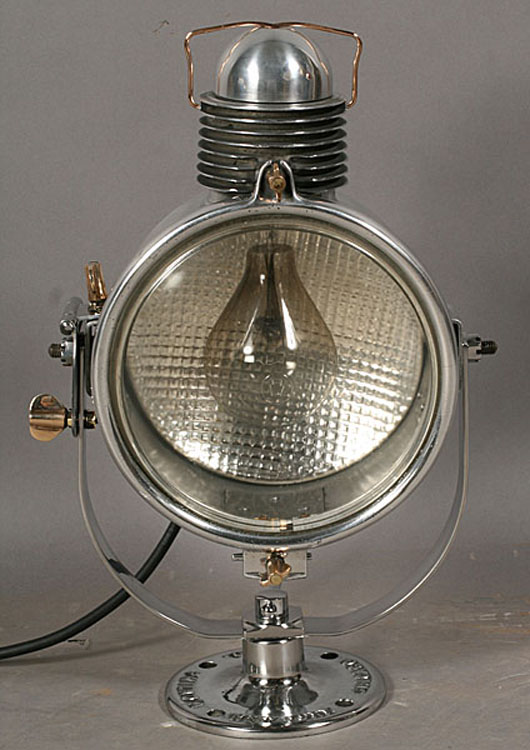 A vintage Golden Glow spotlight in polished steel, made by the Electric Supplier Co. of Philadelphia, circa 1920, brought $1,080 in April. Image courtesy Kamelot Auctions, Philadelphia. 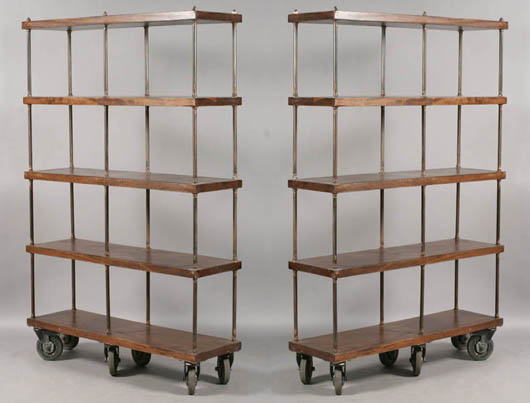 This pair of wood and metal industrial rolling shelf units, sold on June 11 for $4,800, could be used for either storage or display. Image courtesy Kamelot Auctions, Philadelphia. 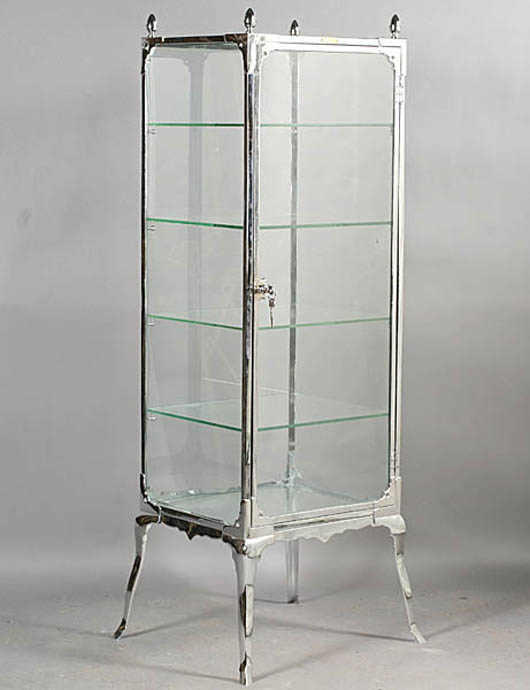 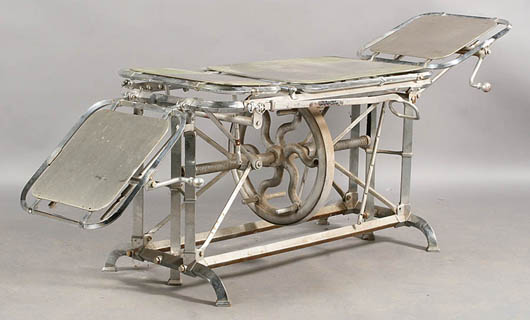 Any reconstruction of Dr. Frankenstein’s experiment would require a good mechanical table. This example, nickel over bronze with multiple gears and levers, sold in Kamelot’s June auction for $3,840. Image courtesy Kamelot Auctions, Philadelphia.