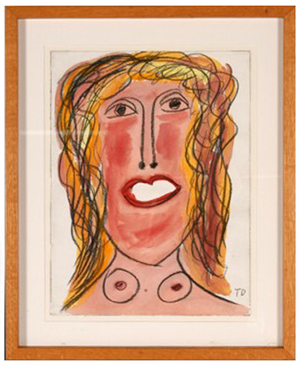 The art world has divided its creative cast into artists with academic training in their craft and what might be called spontaneous artists, who paint or sculpt or fashion works just because they feel compelled to do so. The latter are often labeled as outsider, visionary, folk, or simply self-taught artists, and at times they have been judged by slightly different standards from their formally schooled counterparts.

Thornton Dial can be accurately defined as “self-taught,” but his work has transcended such limiting categories. His drawings, paintings and constructions have crossed over into the broader contemporary art field, while retaining the emotional resonance of his historical and cultural influences.

“Hard Truths: The Art of Thornton Dial” is a traveling exhibition organized by the Indianapolis Museum of Art, which presents 70 of the artist’s best works, including 25 on view for the first time. The show will be on display at the New Orleans Museum of Art through May 20; at the Mint Museum in Charlotte, N.C., June 30 to Sept. 30; and at the High Museum of Art in Atlanta, Nov. 3 to Jan. 13.

In an interview before the opening in New Orleans, Joanne Cubbs, the IMA’s adjunct curator of American Art, addressed the pluses and minuses of the “self-taught” pigeonhole: “Like a wide assortment of other artists who work outside the familiar conventions of the established art world, Dial found himself characterized as a ‘folk’ or ‘outsider’ artist.

“Accepted and understood through the lens of these categories, Dial’s work gained important recognition. But at the same time, he has fallen prey to the problematic notions that frequently accompany these terms, to their fetishizing of difference and to their often false characterizations of his art as naïve, innocent or insular.

“Because Dial’s complex and large-scale paintings and sculpture so closely resemble forms of mainstream contemporary art, there has been even further confusion, and he has experienced some extreme highs and lows in the art world’s critical reception and understanding of his work over the years.”

Now in his early 80s, Thornton Dial was born in Emelle, Ala., in 1928 and lived through the cultural changes experienced by blacks living in the South during the 20th century. Cubbs said, “Dial’s art is filled with a vocabulary of repeating symbols that provides clues to the work’s richly layered meanings. He uses the tiger as an avatar of African American struggle and the ability to land on one’s feet despite the imbalances of injustice in a racist world.”

Dial was employed for almost 33 years as a welder for the railway carmaker Pullman Standard Co. and labored at other jobs in the construction field, in the course of which he gained physical skills that have been utilized in his artistic compositions. He always made things, but little survives from his early years. Cubbs explained, “It is true that, until the mid 1980s, Dial maintained a certain amount of secrecy about his work. Fearing reprisals from whites and even fellow blacks who might resent or misunderstand his social commentary, he reportedly hid, recycled or buried many of his earlier creations.”

As folk and “outsider” art emerged as a collecting field in the 1980s and 1990s, Dial’s work gained institutional attention. He was one of the artists included in “Self-Taught Artists of the 20th Century,” a 1998-1999 touring exhibition with a comprehensive catalog organized by the Museum of American Folk Art in New York City.

Dial has produced much new work in the intervening years, as can be seen in the current “Hard Truths” exhibition. Ranging from sensitive charcoal drawings on paper to elaborate assemblages of found materials, these works have helped him break out of the constrictive “self-taught” label and attracted the attention of the broader art market.

Folk art expert Steve Slotin presents two annual auctions in his special field. Next up is The Spring Masterpiece Sale on April 21-22 in Buford, Ga. He is also the director and founder of Atlanta’s Folk Fest, Aug. 17-19, which will include 100 galleries and dealers from around the country.

Slotin has strong opinions about his specialty area: “For a long time this art has been kept out of the mainstream art community. Self-taught art is the most important visual culture America has ever produced.” He particularly cherishes the freedom of American folk art from European academic influence.

He continues, “There are probably about 10 folk art exhibitions traveling the country right now. This is the one true American art form—being shown at museums and being sold at auctions—that’s still affordable to collect. Now a lot of these pieces have gone way up in value, but this is a from-the-ground-up art field where the prices are not set by the artist but by the market.”

In addition to “Hard Truths: The Art of Thornton Dial” in New Orleans, “Bill Traylor: Drawings from the Collections of the High Museum of Art and the Montgomery Museum of Fine Arts” is on view in Atlanta through May 13. Another touring exhibition, “Stranger in Paradise: the Work of Reverend Howard Finster,” will be at the Akron (Ohio) Art Museum through June 3.

“We always have examples of Thornton Dial’s work in our auctions,” Slotin points out. “Since we focus on folk art masters, he’s always been one of the artists included. We’ve tried to seek out some of the best pieces available. Some of the smaller pieces are affordable for any collector, even those just getting into folk art. But we occasionally get in large constructions and more important pieces, and they will go to the high-end folk art collector.”

He added, “Dial does have a recurring theme in his work involving tigers and other animals with a lady, particularly in his work over the last two decades. It’s very attractive, and there’s symbolic meaning behind it all. Each piece is always a little different. We will have quite a few works in the April auction. There should be a whole page of the catalog dedicated to him.”

On a concluding note, Joanne Cubbs, curator of the current exhibition said of the artist: “Although his work can be dark, it also expresses the hope that we will somehow find our way through that darkness. Every image of social injustice is actually a call for our betterment. Within each evocation of struggle and ruin, there is always the underlying possibility of human transcendence, moral striving and spiritual regeneration. A unique merging of aesthetics, history, social conscience and metaphysics, Dial’s work moves the discourse of contemporary art into remarkable new territory.” 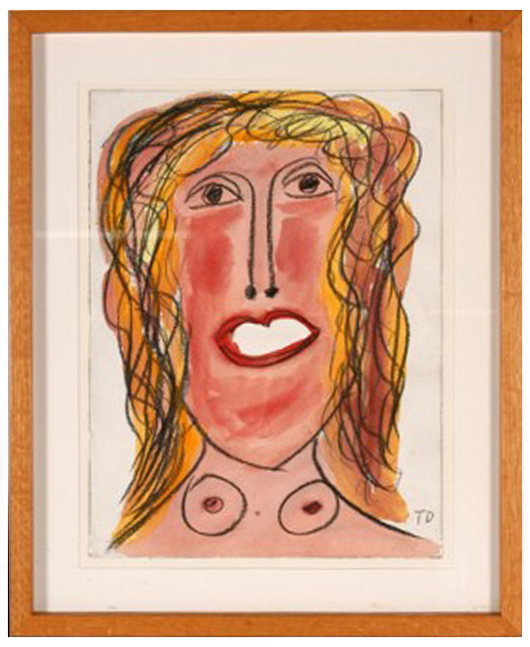 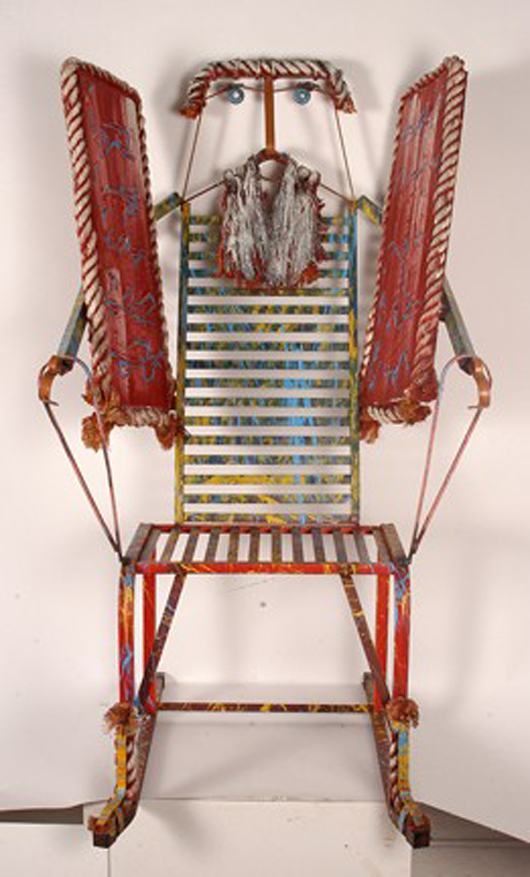 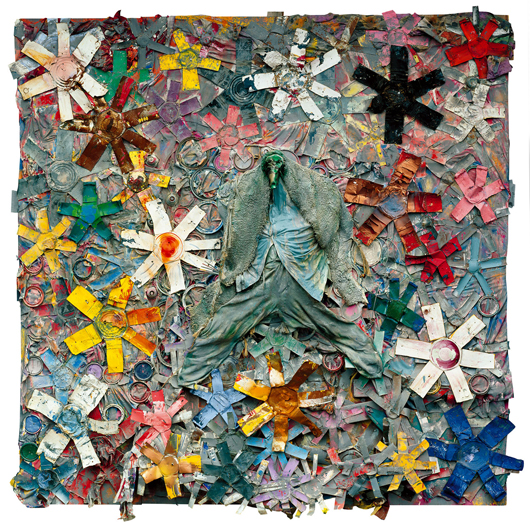 Organized by the Indianapolis Museum of Art, ‘Hard Truths: The Art of Thornton Dial’ is on view through May 20 at the New Orleans Museum of Art before traveling to the Mint Museum in Charlotte, N.C., and the High Museum in Atlanta. This 2004 work, ‘Stars of Everything,’ is composed of paint with fiber, wood, metal and plastic scraps. Collection of the Souls Grown Deep Foundation. Photo by Stephen Pitkin. 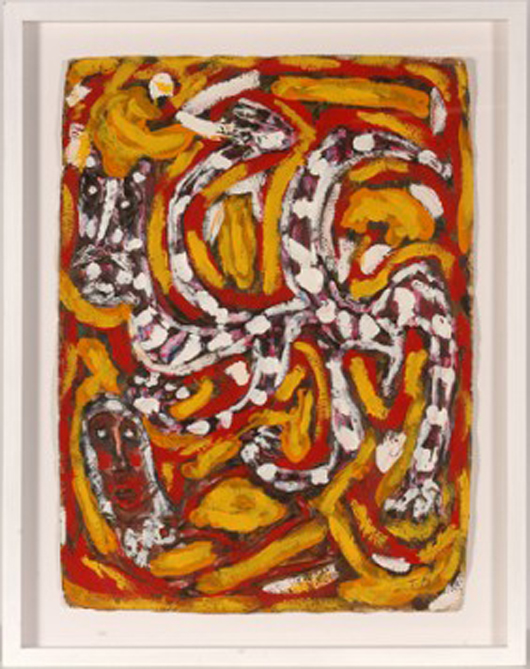 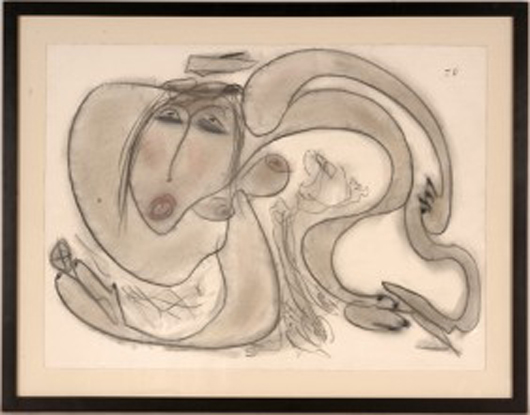 Thornton Dial’s work is filled with images of women. ‘Driving for Safety,’ a pastel and graphite image on paper, sold for $4,000 at auction in November. Courtesy Slotin Folk Art, Gainesville, Ga. 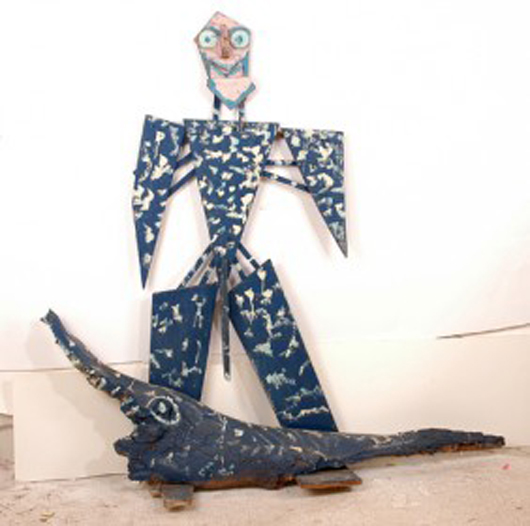 Dial’s sculptural constructions can dominate a room. ‘A Man & His Gator’—paint on plywood and found stump—measures 66 inches by 65 inches. The work sold for $1,050 last year. 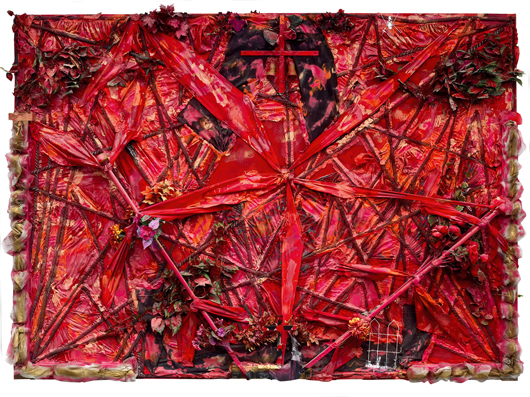 Another work in the current traveling exhibition, ‘Construction of the Victory,’ 1997, is a composition of found objects and paint on canvas on wood. Collection of the Souls Grown Deep Foundation. Photo by Stephen Pitkin 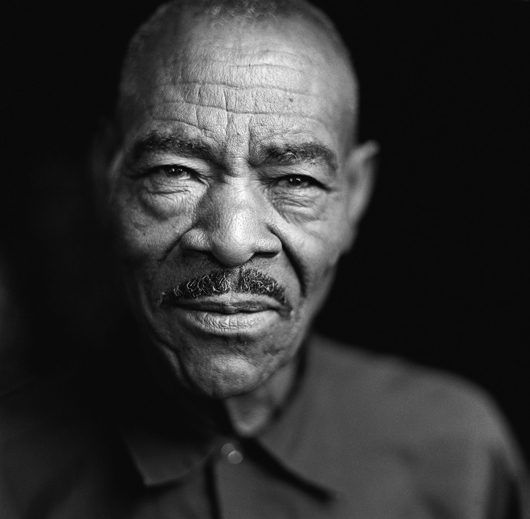