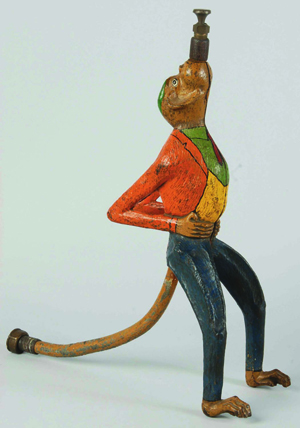 The Monkey sprinkler brought $9,000 at a recent auction. Photo provided by John and Nancy Smith.

PHILADELPHIA (ACNI) – A mass-manufactured symbol of suburban living, the lawn and garden sprinkler has moved from the tool shed to the collectors cabinet. Like many other products of late 19th and early 20th century industrial design, the well-turned sprinkler is now appreciated as a piece of sculptural and cultural beauty.

Andy Durham, of Annandale, Va., has a collection of more than 80 sprinklers, mostly steel and iron watering implements made from the late 1800s to the 1950s. The joys of collecting were instilled in Durham as a boy, when he’d visit his grandfather, a collector of holly trees, fluorescent minerals, and books on Quaker history.

Durham’s first obsession was horticultural books. Then, about 15 years ago, he picked up a metal sprinkler for $5 at a garage sale, and used it to keep his lawn green. “It dawned on me one day that this is an antique,” and he began searching a new marketplace called eBay for other early sprinklers, a logical collecting progression for Durham, a landscape architect.

He learned that sprinklers were an offshoot of the first pressurized water and fire-suppression systems invented in the 1870s. They were initially used in buildings and utilized public water systems and individual water tanks. They moved out to agricultural use, and then to the growing landscape and public park movements. As the front lawn and home garden became an important component of the middle-class suburbs, the sprinkler industry saturated the market.

In the early 1880s, Durham explained, the designs were practical, intended to do a job on a farm or lawn. “There was a burst of creativity in the first decades of the 1900s. There were many manufacturers involved, and that allowed for expression of styles and shapes.”

Durham appreciates a wide range of sprinklers stylistically, he said, but is most interested in the heavy, detailed metal pieces, some of which boast beautiful scrolls and lion claw feet. One of his favorites was made by the White Showers Company of Detroit. It has a brass piston and carefully crafted cast iron parts. White Showers went into operation before the Great Depression, made a limited number of sprinklers, and went out of business after the market crash.

The 1940s saw the introduction of Bakelite, the early plastic, in sprinkler design. Exciting space age designs were launched in the 1950s. But the manufacturers incorporated aluminum and cheaper plastics, as the well-crafted metal sprinklers became too expensive to produce and ship.

Durham said collectors can find smaller examples for as little as $20, and “nicer ones in the hundreds of dollars.” Finding sprinklers at garage sales, flea markets or even antique shops has become a challenge, “but if you click on eBay you can still find dozens,” he said.

Durham’s collection includes examples of how sprinklers were portrayed in advertising, from postcards used by traveling salesmen, to full-size pages in 1940s Life magazines, capitalizing on the mail-order trend.

One of the popular collecting categories is figural sprinklers. The Firestone Rubber Company featured a line of upright, silk-screened figures on sheet metal that included the Sambo character, a clown and monkey, explained Durham.

A highly sought figural sprinkler is the Cowboy, a 30-inch-high figure whose lasso spins around and drops down as he waters the lawn. There were fewer than 100 made, Durham said, and may sell for as much as $4,000 now.

Figural sprinklers are the focus of John and Nancy Smith, of Barnesville, Md., whose more extensive collections include banks and doorstops. “We love figural cast iron,” explained John, “and lawn sprinklers really lent themselves to figural designs.”

But not very many were made in cast iron. The Smiths count 18 different figural sprinklers in that medium. “And searching for those with great original paint was a challenge. They were used, so they had a tendency to rust,” John Smith said.

“What happened,” John Smith explained, “is that they have a folky look, so folk art dealers are buying them. They are commanding a great deal of money these days. The Monkey sprinkler sold at auction recently for $9,000. A folk art collector bought that one.”

The cast iron figurals were mainly produced in the 1920s and 30s, Smith said, by some of the same foundries that made the doorstops he and his wife collect. “The 20s and 30s were tough times, and they created the sprinklers to make some extra money.”

The early cast iron sprinkler companies included the English manufacturer Nuydea, National Foundry of Massachusetts, and Grey Iron of Mount Joy, Pa. Nuydea produced the Frog on Globe, as well as sprinklers with ducks and cardinals in the 1920s. Other companies made turtle and alligator models and a two-faced man.

“Bradley and Hubbard, one of the ‘Cadillac’ casting companies, made tremendous forms on sprinklers, including a wood duck and mallard,” Smith said.

While Andy Durham can find his objects of desire online, the Smiths hunt for figural sprinklers at antique shows and auctions and through dealers of figural cast iron. “But in the condition we like, they are getting very difficult to find. They’re starting to get rare.”

Visit John and Nancy Smith’s website to view their collections and sale items at www.castirononline.com. 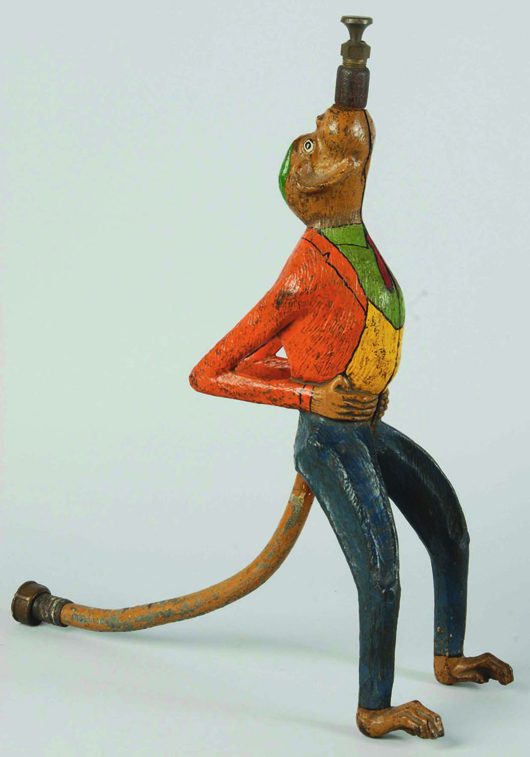 The Monkey sprinkler brought $9,000 at a recent auction. Photo provided by John and Nancy Smith. 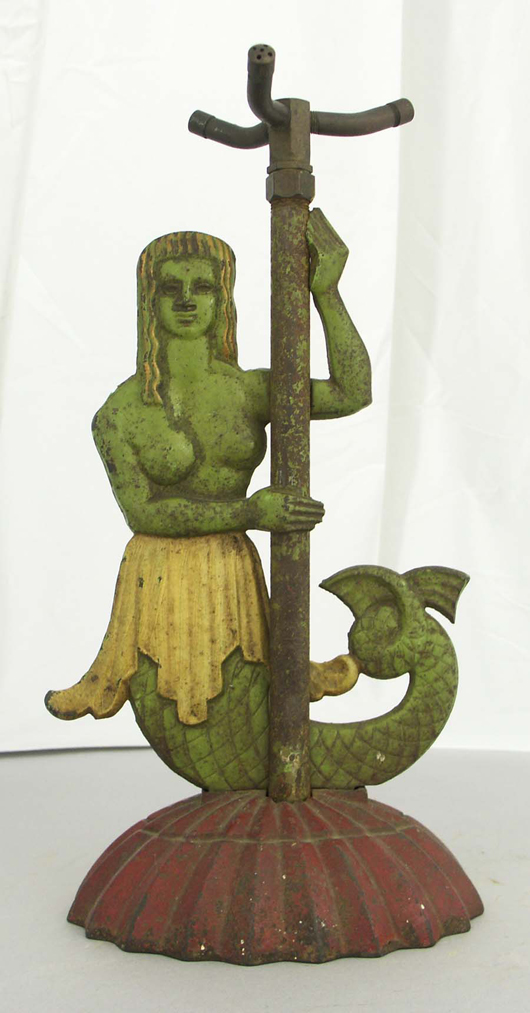 The Mermaid is a sprinkler with style and grace. Photo provided by John and Nancy Smith. 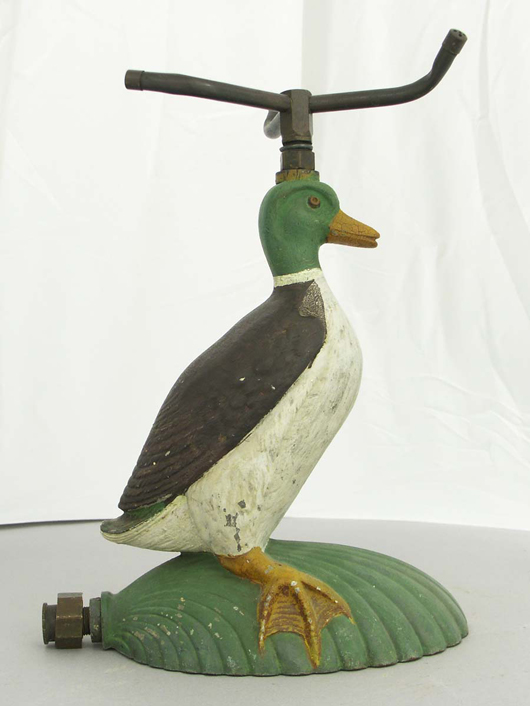 Bradley and Hubbard, one of the premier metal casting companies, produced this Mallard sprinkler. Photo provided by John and Nancy Smith. 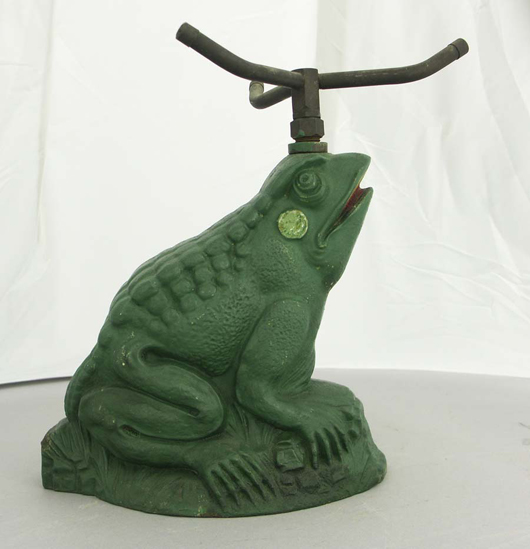 The sitting frog was made by Bradley and Hubbard. Photo provided by John and Nancy Smith. 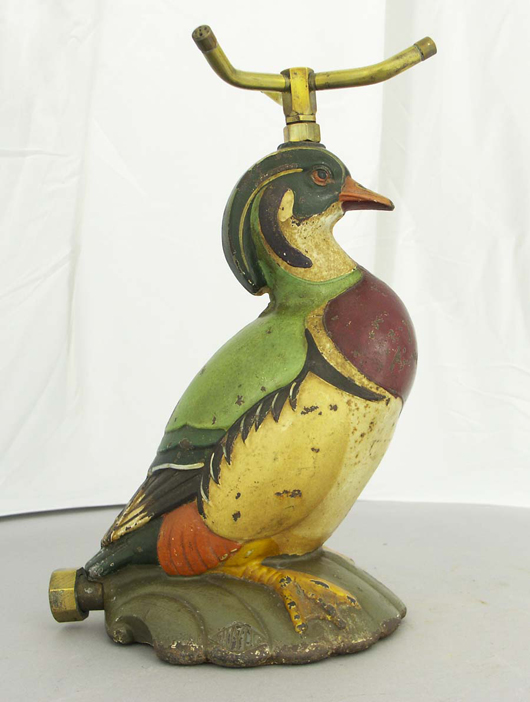 One of the early sprinkler manufacturers was Nuydea, which produced the Wood Duck. Photo provided by John and Nancy Smith. 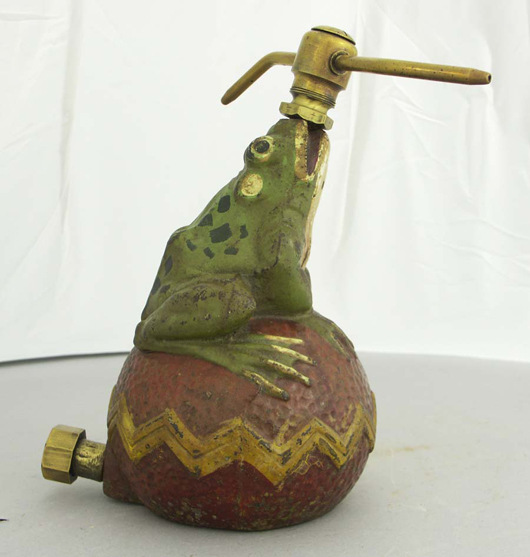 Nuydea also made the colorful Frog on Globe. Photo provided by John and Nancy Smith. 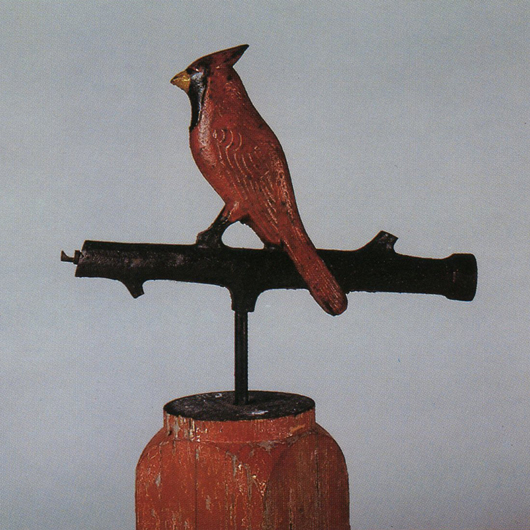 The charming Cardinal on Branch was designed by an unknown manufacturer. Photo provided by John and Nancy Smith. 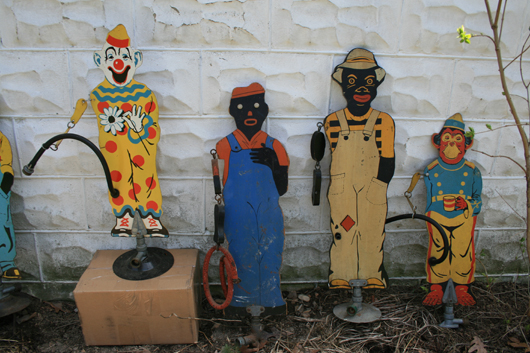 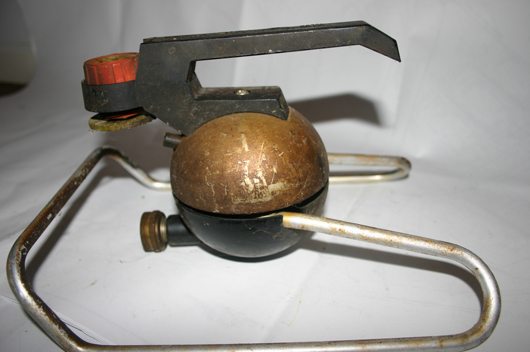 The Space Age influenced the style of sprinklers made in the 1950s. Photo provided by Andy Durham.

When in Rome, Japanese man inspired to restore pyramid