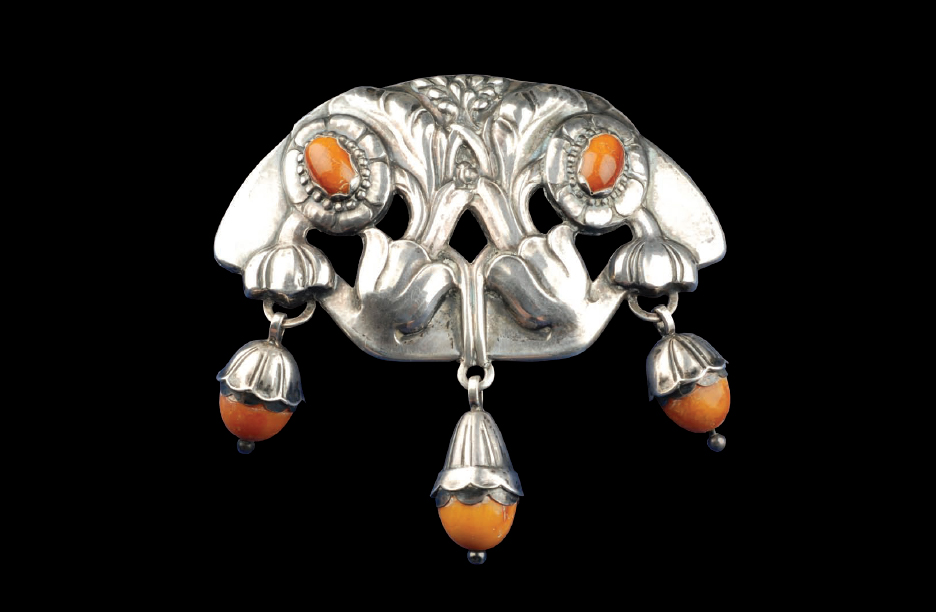 A rare silver and amber brooch designed by Georg Jensen, circa 1909 to 1914. Courtesy of Skinner Auctioneers and Appraisers

In the realm of silversmithing, the name Georg Jensen is the epitome  of the craft. Longtime collectors seek out Art Nouveau-influenced Jensen hollowware – the large tableware that is both highly decorative and functional. Younger consumers, on the other hand, tend to favor the modernist flatware and jewelry – the more-affordable pieces that still reflect the uncompromising quality long associated with the Jensen marque.

“It’s like the names Tiffany and Cartier,” said Michael Millea, co-owner of Millea Bros. Ltd., the Madison, N.J.-based auction house. “If you look at auctioneers’ catalogs, Jensen is always a draw – it was 10 years ago, and it is today. Jensen is the kind of thing that is always popular.” 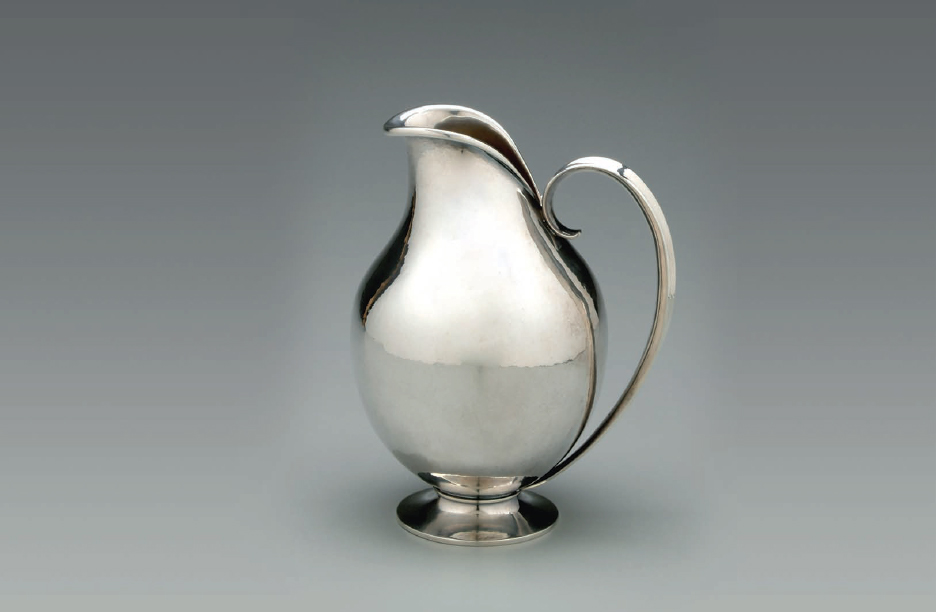 The Georg Jensen name takes in more than just the creations of the artist himself. More than 90 craftsmen worked for the firm during the founder’s lifetime and beyond, covering some 95 years of production and an evolution of styles. Born in 1866 in Dyrehaven, Denmark, Jensen was trained as a goldsmith, sculptor and ceramicist. He was 37 in 1904 when he started his silver business, devoting himself to the creation of everyday objects that combined utility and beauty.

His best-selling products in the early years, however, were silver rings, brooches, bracelets and hat pins, adorned with amber, malachite, moonstones and opals. They weren’t costly to make or purchase, and they appealed to middle-class shoppers. Jensen’s style reflected themes from nature, in tune with the Arts & Crafts movement in England and Art Nouveau in France. The pieces were all carefully, lovingly handmade, as if each were a work of art unto itself, as opposed to the machine-stamped, mass-produced lines of the Industrial Revolution. 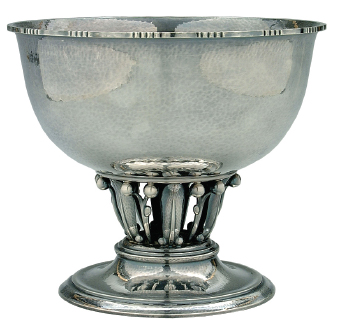 The Jensen craftsmanship was then carried over to the production of flatware and hollowware. His teapot with a floral motif called Magnolia was expanded into a full tea or coffee service. His work in utilitarian pieces blossomed into bowls, boxes, pitchers, candelabra, chandeliers, clocks, dishes and trays.

“The pieces designed by Jensen himself have an organic, handcrafted look. They are the classic Jensen pieces,” Millea said.

But the Danish artist collaborated with equally talented designers in his studio, and allowed them free rein to develop their own styles and products. Together with Christian Mohl Hansen, Jensen created the dove brooch, a motif that appears on other Jensen silver as well. Johan Rohde created the famous Acorn flatware pattern. Jensen’s brother-in-law, Harald Nielsen, was behind the more-modern flatware patterns, including the popular Pyramid design. When Jensen died in 1935, Nielsen became artistic leader of the company. Another acclaimed Jensen silversmith was Henning Koppel, who designed graceful hollowware pieces as well as sleek flatware, brooches and rings. 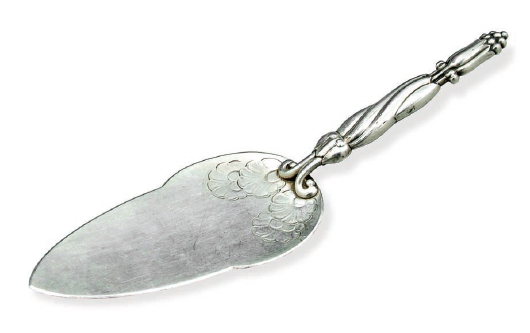 This sterling silver cake service, with stylized bud handle, was designed by Georg Jensen in 1945. Courtesy of Brunk Auctions

“There is a beautiful pitcher with a long handle by Koppel – it looks like a slightly altered gourd – that is great modern design,” said Millea.

Finding and being able to acquire those large pieces from the Jensen workshops has become increasingly difficult, according to Millea.

“Across the board the big important hollowware pieces don’t come up that often; they’re pretty rare now,” he said. “We don’t come upon those big candelabra very often. Those pieces are already in major collections.”

Robin Rice, silver specialist at Brunk Auctions in Asheville, N.C., said Jensen hollowware is still appearing on the market, often coming from the shelves of collectors who are downsizing. They tend to end up in the hands of other advanced collectors, though. 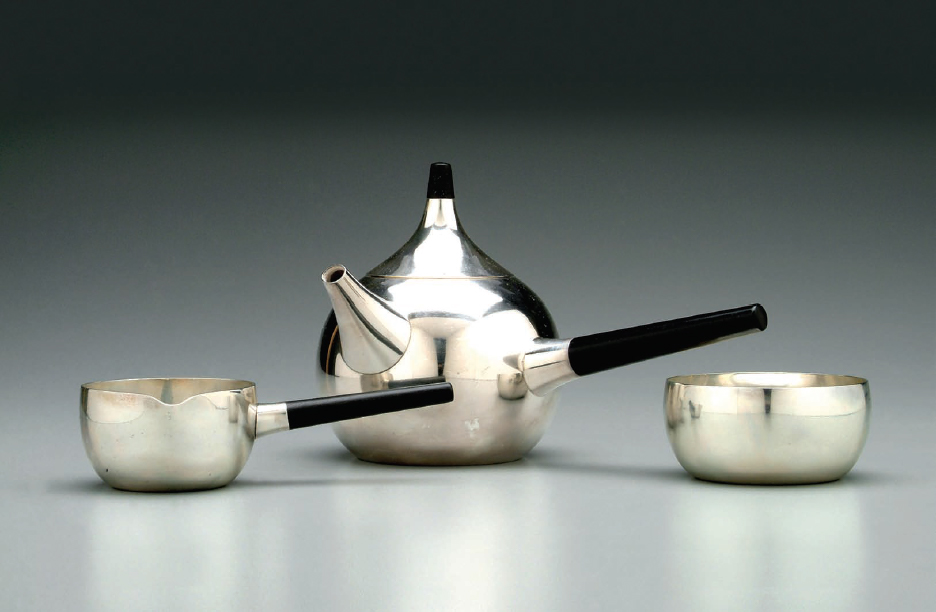 Tea services, or at least parts of them, have been offered in Millea Bros. auctions. They sold the tray from a Pyramid pattern in September 2007 for $4,000. “Sometimes the tray gets separated from the rest of the service,” Rice said. “Sometimes it’s a matter of the heirs splitting a set up.”

The Milleas handle the sales of many estates in the Manhattan area, and sometimes become the source of Jensen pieces as collectors who purchased them in the 1940s, ’50s and ’60s pass them on to the next generation.

Younger customers tend to pay more attention to Jensen jewelry, such as brooches, cufflinks and tie clips, or to the flatware, said Michael Millea. His design-conscious peers are often more interested in the “clean-lined” designs. “The Pyramid-patterned flatware and the fluted patterns appeal to the modernist aesthetic that is so popular now.”

The work of designers like Nielsen and Koppel had “a different aesthetic” than the classic  Jensen  look, Millea said. “But the handcraftsmanship and quality continues through. It’s something that is synonymous with Jensen silver (of all periods).” 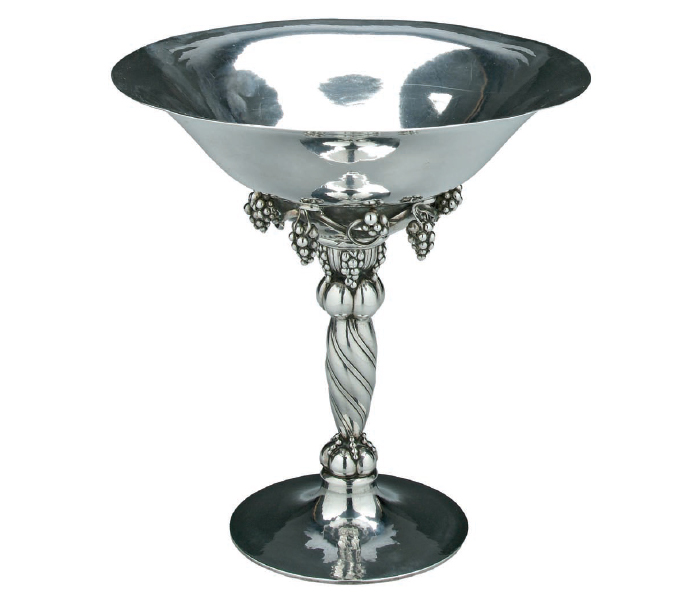 This sterling compote bowl, with a spiral twist stem and grape clusters, was designed by Georg Jensen between 1926 and 1932. Courtesy of Brunk Auctions

Rice said the most desirable, larger pieces are the trays, pitchers and bowls. Flatware designed by Georg Jensen himself, particularly in the Grapevine and Blossom patterns, are also highly sought after and remain among the more affordable Jensen products. While the Jensen artists intended their work to be beautiful objects that could and should be used, collectors of the hollowware and flatware don’t always concur. “Whether it’s Jensen or English silver or something else, there are certain collectors who like to surround themselves with antiques and feel that using them is part of owning them, and that they should be used,” Millea has found. “And there are certain people who feel just the opposite – that they should be looked at and admired but not used. That’s true in most collecting categories, whether it’s Jensen or other antiques.” 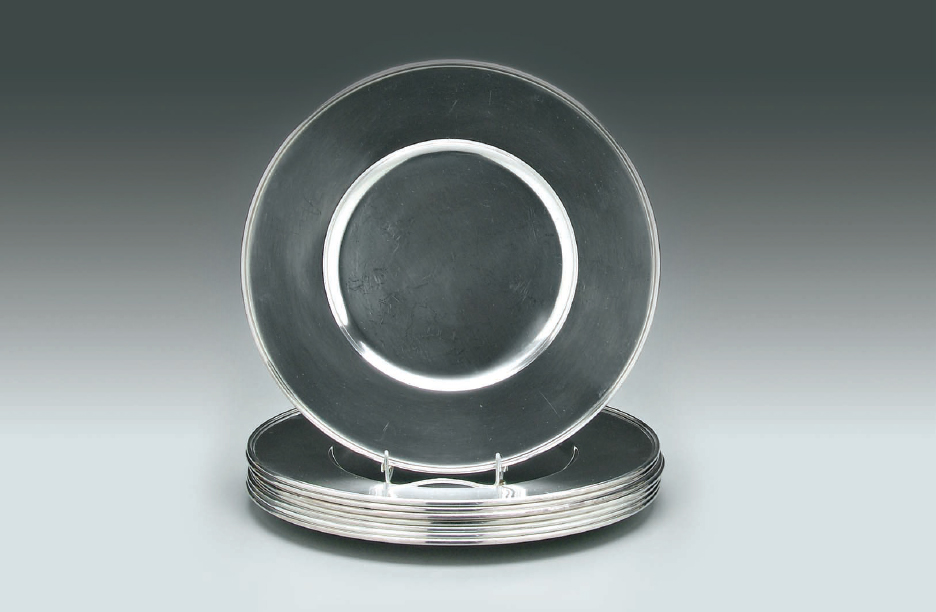 A set of eight sterling plates designed by Harald Nielsen in 1945. Courtesy of Brunk Auctions

Maintaining Jensen silver is relatively easy. The less polishing you do, the better, Millea advised. “Silver is silver; it’s not terribly delicate. But if you keep it out, it’s going to get tarnished. If you put it away and keep the oxygen away, in felt or zip-lock bags, it won’t tarnish.” Apart from the wear of polishing it over and over, caring for silver is that simple, he said.

The best places to find Jensen silver these days is an auction house, “so long as you know the auction house is reputable and its goods are genuine,” Millea said. “There are plenty of great antique silver dealers to buy from, too, especially in New York … If they’re selling 20th-century stuff, they’re definitely going to have some Jensen.” 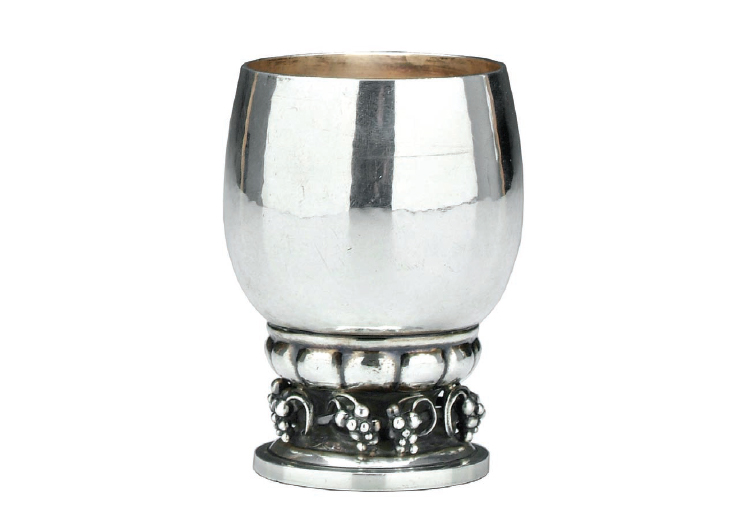 A 1945 sterling beaker by Georg Jensen. Courtesy of Brunk Auctions

The perennial characteristic of the Danish silversmith “was, and primarily is, design,” Millea said. “If you look around,  there were obviously artisans who came through the Arts & Crafts movement, through Tiffany and Co., and other firms that produced silver of high quality. But there’s a certain organic feel – especially in the work produced by Jensen himself – that you don’t see anywhere else. It’s just a unique thing. There’s also that handcraftsmanship, the hammered finishes and quality of silversmithing, that aesthetically is just very appealing. “Jensen (silver) has been around much longer than I have,” Millea said, “and when I got into it, Jensen was already a commodity. You’re always going to have someone at your door to buy it.”

Interest in jewelry produced by the Jensen workshops is stronger than ever, according to Gloria Lieberman, director of Fine Jewelry at the Boston headquarters of auction and appraisal company Skinner Inc. 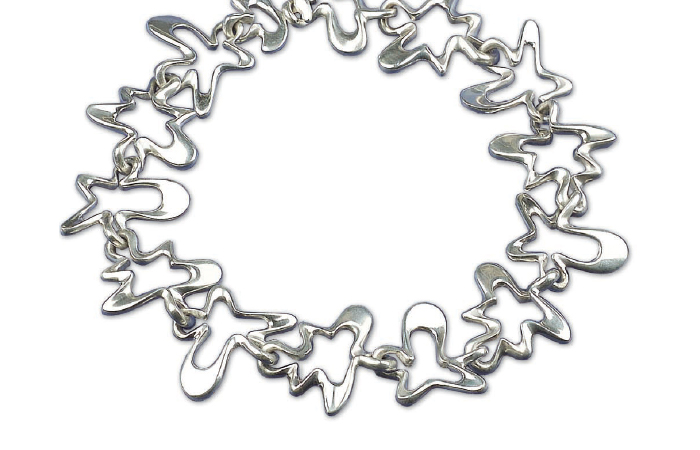 “I think the popularity is growing because there is a larger population looking at Jensen (through) the Internet,” Lieberman explained. And because Jensen pieces are easily identified by their name and number, the Internet is a reliable marketplace, she said. Web searchers are purchasing Jensen’s modernist styles, many of which were not as popular a mere 10 years ago. And the hottest trend in Jensen jewelry is the gold line. The name Jensen is primarily associated with silver, but at age 14 Georg Jensen apprenticed with a goldsmith in Copenhagen. So gold actually goes back to the designer’s roots, as well.

“It has been around for a while,” Lieberman said, “but nobody cared about it years ago…not until the last year or two.” 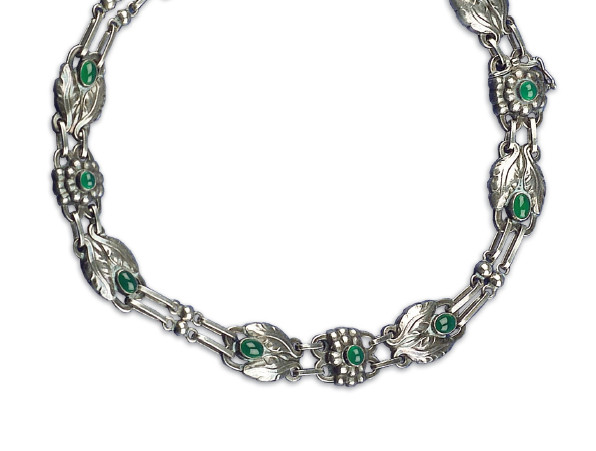 Collectors still chase after the larger silver pieces as well. “The bigger and drippier, the better,” Lieberman said. “But those pieces were not in large production, so they fetch a high price.” Some recent sales at Skinner have seen the sale of a large brooch and early necklace, each reaching the $10,000 range. “It is, of course, about rarity,” Lieberman added.  Jensen’s jewelry was not always so dear in price. “He was part of the Art Nouveau movement, and that was not about using precious stones and precious materials. It was about handcrafted floral designs. It was about silver, and the look of jewelry forged by hand.” In Jensen pieces, the hammered work and markings are plainly visible, and the stones were not the principal concern.

“But customers loved his combination of amber and green stones. Collectors love the moonstones still.”