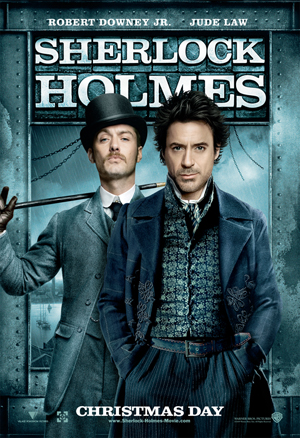 The latest screen incarnation of Sherlock Holmes opened on Christmas Day 2009. The film focuses on the sometimes prickly relationship between Holmes and Watson as portrayed by Robert Downey Jr. and Jude Law. The duo makes use of brains and brawn in foiling a mysterious threat against the English government.

If you answered, “Alice in Wonderland, Dracula and Sherlock Holmes,” you win the prize.

Arthur Conan Doyle (1859-1930), the creator of the famous detective in that trio, was a prolific writer of novels, short stories, and nonfiction articles. His successful literary career eventually eclipsed the medical profession for which he had trained. In the course of supporting his family, he invented many characters for his adventure stories and historical novels, some of which were very popular in their day. But even he did not predict that it would be Sherlock Holmes who would live on through the centuries.

As Doyle issued short stories and novellas featuring Holmes between 1887 and 1927, the art of the cinema grew from a novelty to an industry. A major boost for the popularity of this cultural icon was the public demand to see the character brought to life not only on the stage but on the screen. Interpretations varied – one actor would portray Sherlock as a keen thinker and eccentric violinist, another might play the role as man of action or master of disguise.

One of the earliest films was an American Vitagraph 8-minute movie called The Adventures of Sherlock Holmes in 1905. The most recent is the Christmas 2009 release Sherlock Holmes directed by Guy Ritchie with Robert Downey Jr. and Jude Law in the lead roles of Holmes and Watson. In the best physical condition of his career, Downey comes out swinging as a very active detective who tears around London like Jason Bourne.

While some fans might complain this is not their conception of Holmes, it is true that the famous duo are young men when they first meet in their initial adventure, A Study in Scarlet. At one point, Watson lists Holmes’ pluses and minuses. The doctor notes his exceptional intelligence, some very odd habits, and the fact that Holmes is an “expert singlestick player, boxer, and swordsman.”

In another story, the detective straightens out an iron poker bent double by the villain. And fighting for his life against nemesis Dr. Moriarty, Holmes overcomes him in the end with the use of Japanese martial arts. Based on these statements in the canon, the new movie is justified in its muscular interpretation of the character. Holmes as “action hero” will certainly attract new generations of readers.

Given this long-term relationship between Holmes on the page and screen, it is not surprising that serious enthusiasts have focused their collecting efforts on first editions and movie memorabilia. The first appearance of Holmes, A Study in Scarlet, was published as the lead story in Beeton’s Christmas Annual in 1887. Another novella-length story, The Sign of Four, featuring Holmes and Dr. Watson was published in magazine form in 1890.

Widespread popularly for the sleuthing pair arrived 1891 when George Newnes’ The Strand Magazine began running a series of 12 short stories, later gathered together and published as The Adventures of Sherlock Holmes. The accompanying illustrations by artist Sidney Paget gave the public their first look at a visual interpretation of the character. His drawings of Holmes, his clothing and props became a template for actors playing the role in the future.

Doyle never considered Holmes his life’s work; his attention in the 1890s was focused on writing historical novels, such as Micah Clarke (1888) and The White Company (1891), books now largely forgotten. The author consented to do a second magazine series of Holmes tales, The Memoirs of Sherlock Holmes, but killed off the detective in the last issue, leaving Dr. Watson and his readers inconsolable.

A set of bound copies of The Strand containing the Adventures and Memoirs sold at Bloomsbury Auctions in London in January 2008 for $1,450. A first edition of the collected Memoirs, published as one volume by George Newnes in 1894, brought $1,800 at Bloomsbury New York in June 2008.

Fortunately for fans, public demand brought Holmes back from the dead. The Hound of the Baskervilles, the best-known mystery solved by the detective, appeared in The Strand in 1901 and was published in book form the following year. Always desirable, the tale of the ghostly hound sold at Bloomsbury New York for $2,640 in December 2008. Doyle was persuaded to write three more collections of stories and another novella. The last collection, The Case-Book of Sherlock Holmes, appeared in 1927.

Auction Central News spoke with Richard Austin, director of Bloomsbury Auctions in New York, about the market for Holmes. Referring to past sales, he explained, “These lots are the first collected editions of the stories. The stories that were issued in The Strand were later collected in book form. That was a fairly common occurrence in the 19th century. Poe, for instance, and Hawthorne had stories that were issued in magazines first and then collected in books.

“Copies of Sherlock Holmes are fairly steady sellers because they are important not only for Sherlock Holmes collectors but also for mystery collectors,” Austin continued. “There’s a fairly broad audience for the material. What people want are The Hound of the Baskervilles, The Sign of Four and the Memoirs and Adventures. We usually offer copies of the Adventures and Memoirs every year, and we usually sell one or two copies of The Hound of the Baskervilles in New York.”

Asked what is considered the Holy Grail for Holmes’ collectors, Austin replied, “The first Sherlock Holmes book is A Study in Scarlet, a great rarity that doesn’t come up very often. A great copy of A Study in Scarlet would be a wonderful thing. I don’t think there’s more than a dozen complete copies of that book out there. And even the first American edition, a little paperback, is fairly scarce.”

As far as the new movie is considered, Austin said, “He has been portrayed on the stage and screen for over a hundred years now.” But he added, “Anytime there’s a film connected to literature – Harry Potter, Lord of the Rings – if the film’s a huge hit, there’s a short-term rise in value for the books they are based on.”

For collectors at the highest level, the market occasionally turns up original illustrations for the stories by Sidney Padget or even Doyle’s autograph manuscripts of Holmes’ adventures. In May 2004, Christie’s in New York devoted a sale to the personal papers of Sir Arthur Conan Doyle. The following month, they set a record for a Sherlock Holmes manuscript, selling The Adventure of the Sussex Vampire, circa 1924, for $399,500.

No collection would be complete without a few posters of actors in the role of Holmes. An excellent overview of Holmes’ appearances in dramas is provided by the reference Starring Sherlock Holmes by David Stuart Davies. Memorable portrayals included William Gillette on stage, John Barrymore in silent films, the classic Basil Rathbone movies that began in 1939 and continued during World War II, and Peter Cushing’s version for Hammer Films in England.

Beginning in the 1980s, Jeremy Brett became the definitive Holmes for television viewers on both side of the Atlantic.

The strongly defined character of the detective has also been the subject of cinematic spoofs, such as The Adventure of Sherlock Holmes’ Smarter Brother with Gene Wilder (1975) and Without a Clue starring Michael Caine (1988).

Of all these, Basil Rathbone’s Holmes perhaps most perfectly embodied the sleuth’s combination of cerebral and physical skills. Collectors seek out posters from his two films for Fox and many appearances later in movies at Universal. Grey Smith, poster expert for Heritage Auctions in Dallas, said, “Collecting posters is a nostalgic pastime – we want to own the characters we remember. The Rathbone posters are the most readily available. If you go back to John Barrymore’s one entry, it’s so hard to find that material.”

In November 2008, Heritage sold an insert poster from The Hound of the Baskervilles, the first appearance of Rathbone as Sherlock Holmes, for $10,755. Smith said, “It is really desirable. I called it $8,000-$12,000, so it fell in the middle of that. The problem with the posters from that film is that Rathbone is not really pictured – Sherlock Holmes is shown in silhouette. Rathbone was billed second and Richard Greene got top billing.”

Smith continued, “It wasn’t until The Adventures of Sherlock Holmes, the next one that Fox made, that Basil Rathbone was prominently pictured. We sold a six sheet for the movie in March 2007 for $31,070 – it’s probably the most expensive piece featuring Holmes we’ve sold to date. With the second film, they showed Holmes full length with gun pointed. The six sheet was done in stone lithograph – it’s really a tremendous poster. I estimated it at $10,000-15,000 and it doubled the high estimate. I think it’s the only known copy.”

British actor Ian Richardson in his foreword to Starring Sherlock Holmes wrote, “Offer any actor in the world the part of Sherlock Holmes, and I am willing to wager that you will get an affirmative response. No matter whether they be too short, too old or too fat, the lure of the Great Detective is irresistible.”

As one actor who succumbed to this temptation, he noted, “When you think of Holmes in visual terms, it is always the original Paget illustrations that come first into your mind. The tall, deerstalkered figure with the long sensitive fingers, aquiline profile, and the dark piercing eyes. Next probably comes into your head all those qualities in the person of Basil Rathbone.”

Richardson watched his films as a young man and recalls, “I thought Basil Rathbone the most wonderful actor I’d ever seen. Much, much later, when I played Sherlock Holmes myself, it was always he that I had in mind, try though I might to get out of his shadow.”

The success of the new Sherlock Holmes film, which surpassed $150 million in sales three weeks into its run, demonstrates the continuing appeal of one of the greatest literary characters ever created.

Basil Rathbone made his first appearance as Sherlock Holmes in the 1939 film version of Arthur Conan Doyle’s best known story, ‘The Hound of the Baskervilles.’ Heritage sold this poster in July 2008 for $10,755. Image courtesy of Heritage Auctions. 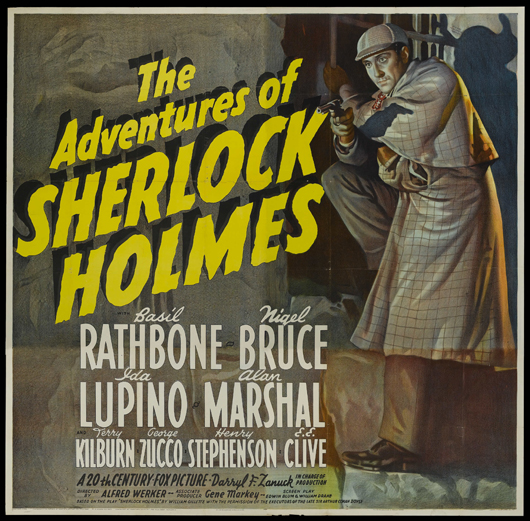 Basil Rathbone and Nigel Bruce as Holmes and Watson received top billing in ‘The Adventures of Sherlock Holmes’ (1939). The rare six sheet poster for the film was sold by Heritage in March 2007 for $31,070. Image courtesy of Heritage Auctions. 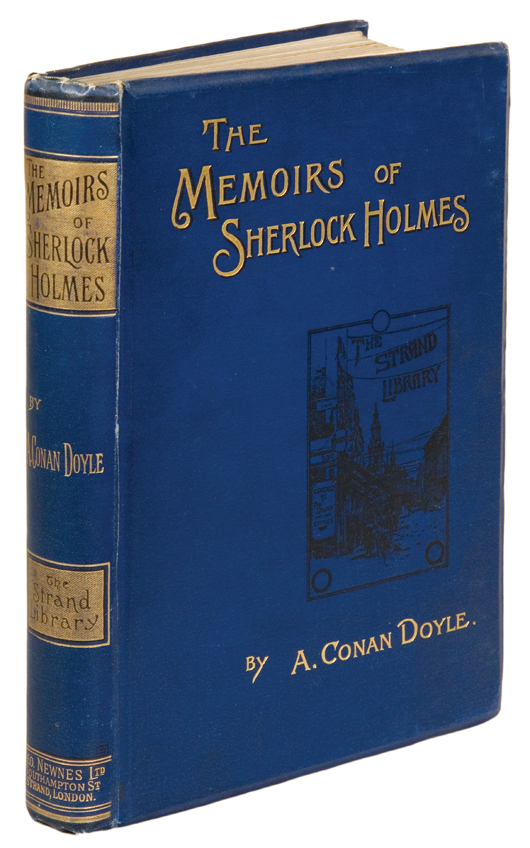 A first edition of ‘The Memoirs of Sherlock Holmes’ (London:George Newnes Ltd., 1894) sold at Bloombury Auctions in New York in June 2008 for $1,800 with buyer’s premium. The collection of 11 adventures includes ‘Silver Blaze,’ ‘The Musgrave Ritual,’ ‘The Crooked Man,’ and ‘The Final Problem,’ in which Holmes appears to meet his death at the hand of Dr. Moriarty. Image courtesy of Bloomsbury Auctions, New York 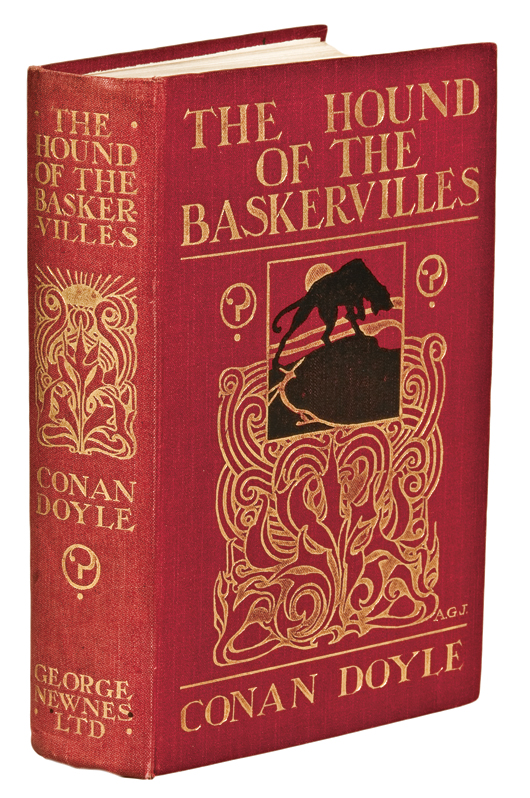 Oft dramatized on stage and in film, ‘The Hound of the Baskervilles’ with its eerie setting on the English moors remains the best known of all Sherlock Holmes tales. This 1902 first edition with its beautifully designed cover and illustrations by Sidney Paget sold in December 2008 for $2,640. Image courtesy of Bloomsbury Auctions, New York