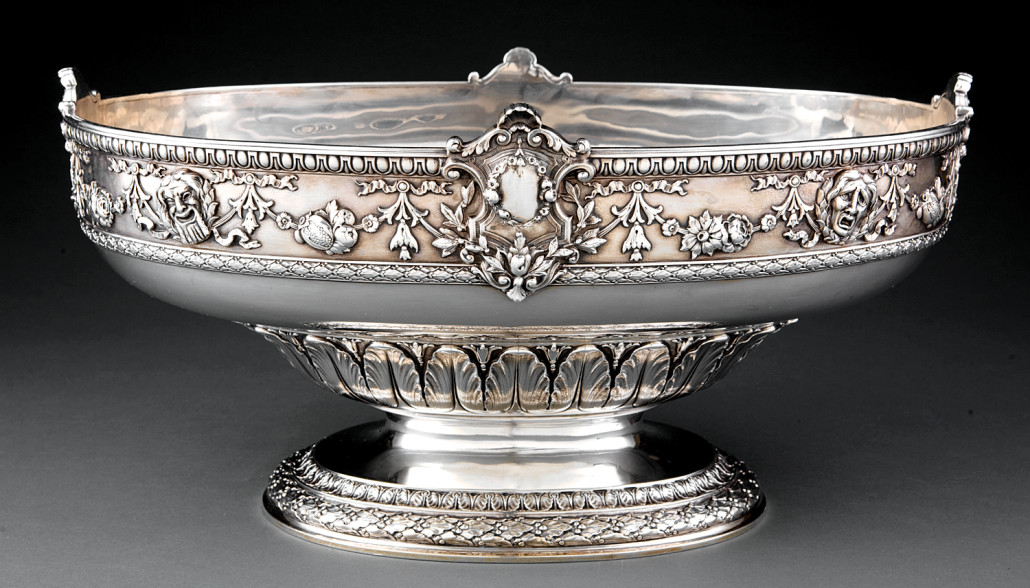 Wine cisterns were heavy silver vessels, sometimes quite large, used for cooling bottles, which became popular in the late 17th century. This Gorham example with Comedy and Tragedy masks, circa 1880, weighs 162.25 troy ounces and brought $23,900 at Neal’s in 2012. Courtesy Neal Auction Co.

NEW ORLEANS – Wine making dates back over eight millennia, distilled hard liquor to the first century. Many of the graceful black and red-figure vases from ancient Greece were made to store and serve wine at parties. Imbibing from beautiful vessels enhances the toast. Collectors have access to centuries of spirited antiques, and the majority of the silver and glass examples can still be put to use at celebrations today.

More than any other metropolis, New Orleans is a city that knows how to party, especially in the month of Carnival parades and parties before Mardi Gras arrives. At the city’s frequent auctions, lots featuring punch bowls, cocktail shakers, wine coolers, and extensive sets of glasses are bid up by eager buyers and quickly set out at home to welcome guests. 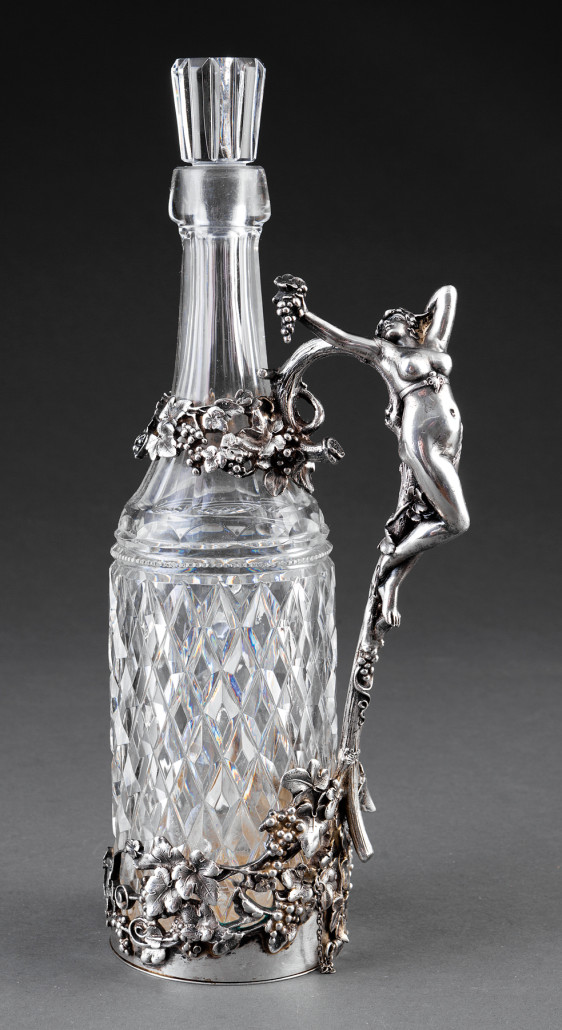 A maenad celebrates the grape with Bacchic abandon on this German silver-handled decanter sold at Neal in New Orleans in January 2015 for $3,704. Courtesy Neal Auction Co.

Rachel Weathers, vice president at the Neal Auction Co. on Magazine Street, notes, “The thing about New Orleanians is they actually take these antiques off the shelf and use them. The Carnival season before Mardi Gras started on Jan. 6, the date of Epiphany, with the first parades beginning that night – Phunny Phorty Phellows goes down St. Charles, and they have a Krewe of Joan of Arc parade downtown that is enormous. Lots of New Orleanians have people over to dinner that night.”

“If you live on a parade route, you are obliged to hold an open house, and just being a friend of a friend can get you in. Punch bowls are used and often sell well. At a lot of the Mardi Gras houses I’ve been to, if the weather is cold, serving a hot punch is helpful. And you might have the old cut glass punch bowl and the sterling ladle with a paper cup that you can take to the sidewalk.” 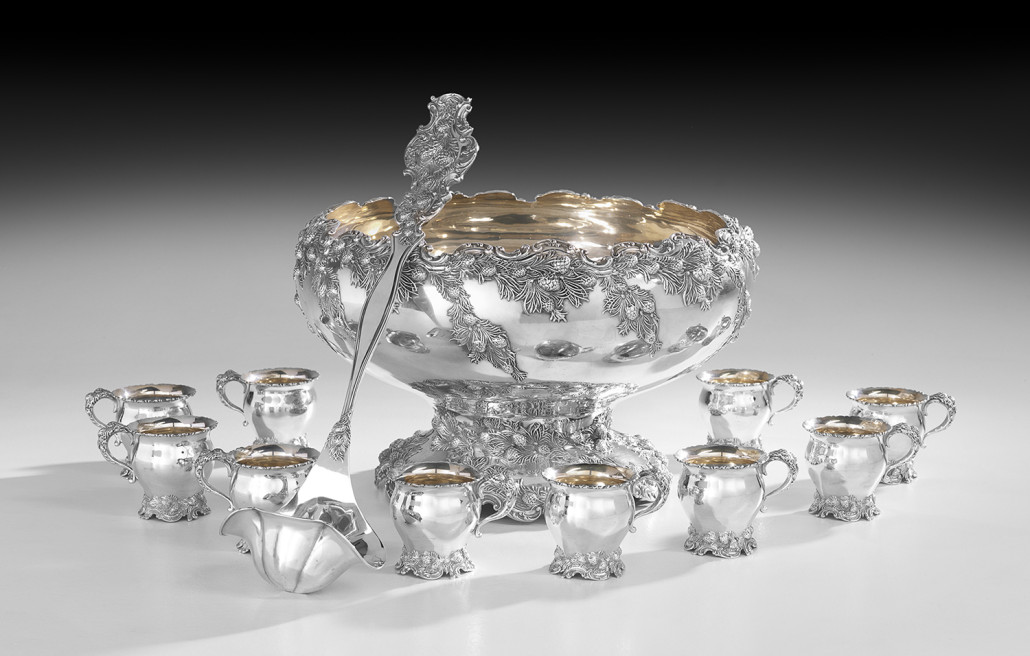 Turning to another favorite form, Weathers says, “Cocktail shakers are like sculpture – they’re a lot of fun. Barware can have a sense of humor. There’s a renewed interest in real cocktails, not just the two ingredient things you can make at home. To watch a real bartender make a Sazerac cocktail is a sight to behold – it takes them 5 minutes.”

In the Arts District last December, the New Orleans Auction Galleries offered a treasure trove of elegant bar paraphernalia in when they sold the art and antiques collection of the late Lloyd C. Flatt. The successful aerospace executive was a well-known wine collector, famous for his tasting events. Among his numerous residences, he kept a house in the French Quarter with a legendary cellar, once said to hold 30,000 bottles. The wine itself had realized nearly $1.2 million when sold at Sotheby’s in 2010. 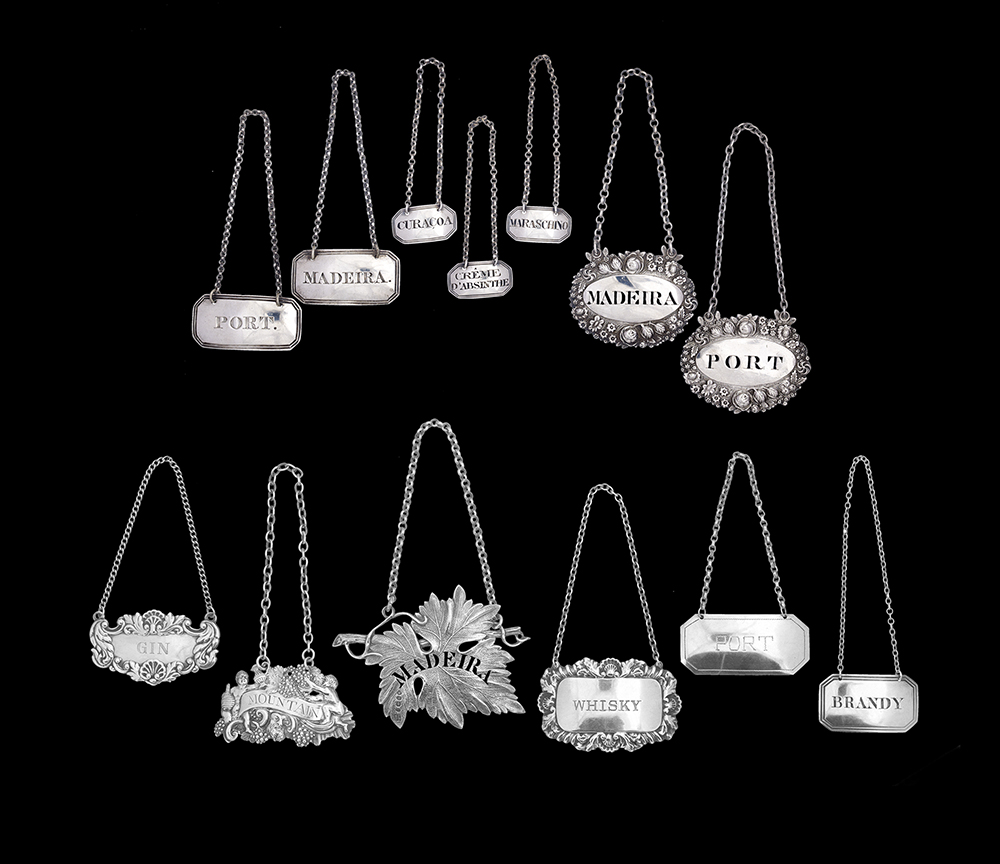 This lot of 13 wine labels from the Flatt Collection includes fine sterling silver examples from the English Regency along with later 20th century pieces. The nucleus for a new collection brought $1,500. Courtesy New Orleans Auction Galleries

Charles C. Cage, silver specialist and office manager at NOAG, had the privilege of cataloging the intriguing collection: “We had those fantastic wine labels – those are plentiful and it’s a great thing for new collectors to focus on. They sell at all prices levels; there are English ones from the Georgian period, you can get them from the 1920s. You can spend as much or as little as you want. And there are some good books out there about them. It’s an interesting field to get into because there’s so much history behind them.”

Turning to a form popular with Millennial collectors, he continues, “Cocktail shakers come in every variety from small silver-plated ones to masterpieces of the silversmith’s art. We had that wonderful travel set in the Flatt collection that had three liquor bottles, four shot cups, a lemon juicer and jigger which all fitted together. Those traveling sets are very popular. Cocktail accessories from the 1920s are very elegant with a certain cachet. A while back, we had a dumbbell-shaped shaker, which had its own patent.” 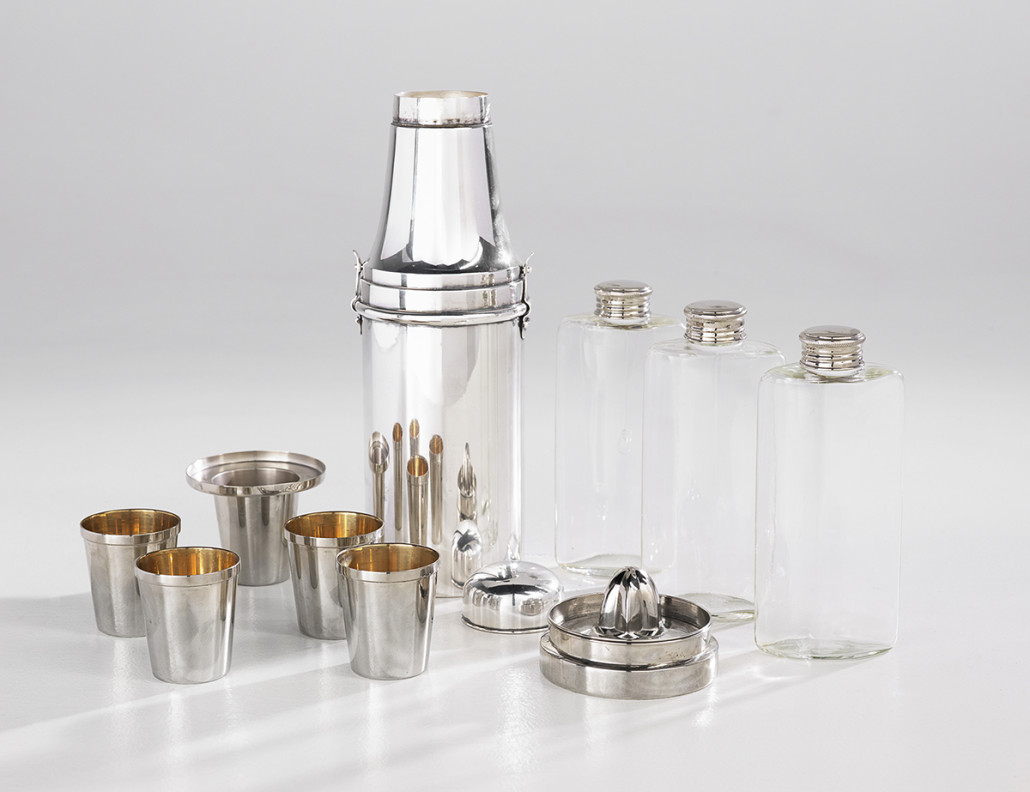 You can take it with you in this traveling cocktail shaker set complete with three flasks and four cups along with a juicer and jigger. The 20th century treasure from the Flatt Collection sold for $2,250 in 2015. Courtesy New Orleans Auction Galleries

Not surprisingly New Orleans has its own “Tales of the Cocktail Festival,” which will be held this year on July 20-24 – yet another occasion to celebrate if you miss Mardi Gras. Although their history may date farther back, local tradition has always held that cocktails were invented in the Crescent City by an apothecary. The word itself may derive from the French for egg cup, coquetier, which may have been used to measure the liquor. It is a fact that New Orleans most famous cocktail, the Sazerac, was invented by relative of Pierre Lamothe, a famous local silversmith working in the early 19th century.

Before cocktails came along, clever hosts from kings to innkeepers mixed spirits with juices and spices to make hot and cold punch. Cage says, “What sells best in the punch bowls are the extraordinarily ornate examples. People serve punch at an extraordinary event and they want something extraordinary to serve it from. The pine needle punch set we sold for $15,000 was gorgeous, and we also had the matching entrée dishes that went with it. I was able to hunt down the designer for that, and it was serendipity that it happened to be in the Christmas sale.” Punch bowls, wine cooling cisterns and monteiths are elaborate, silver-heavy creations that can bring the highest prices in this specialist collecting area.

The best spirited artifacts from the past are now in museum collections. In 2012, Winterthur Museum in Delaware gathered some of the best for the exhibition “Uncorked! Wine, Objects & Tradition,” which was accompanied by an illustrated booklet.

An abundance of vintage barware is always available in auctions conducted with absentee and live online bidding through LiveAuctioneers.com.

SEVEN FORMS TO COLLECT AND USE

1 – COCKTAIL SHAKERS
From the Thin Man films of the 1930s to James Bond adventures, cocktail shakers are the ultimate expression of 20th century cool and remain an essential of the modern bar. Available at a range of price points, look for works of art to display and use. 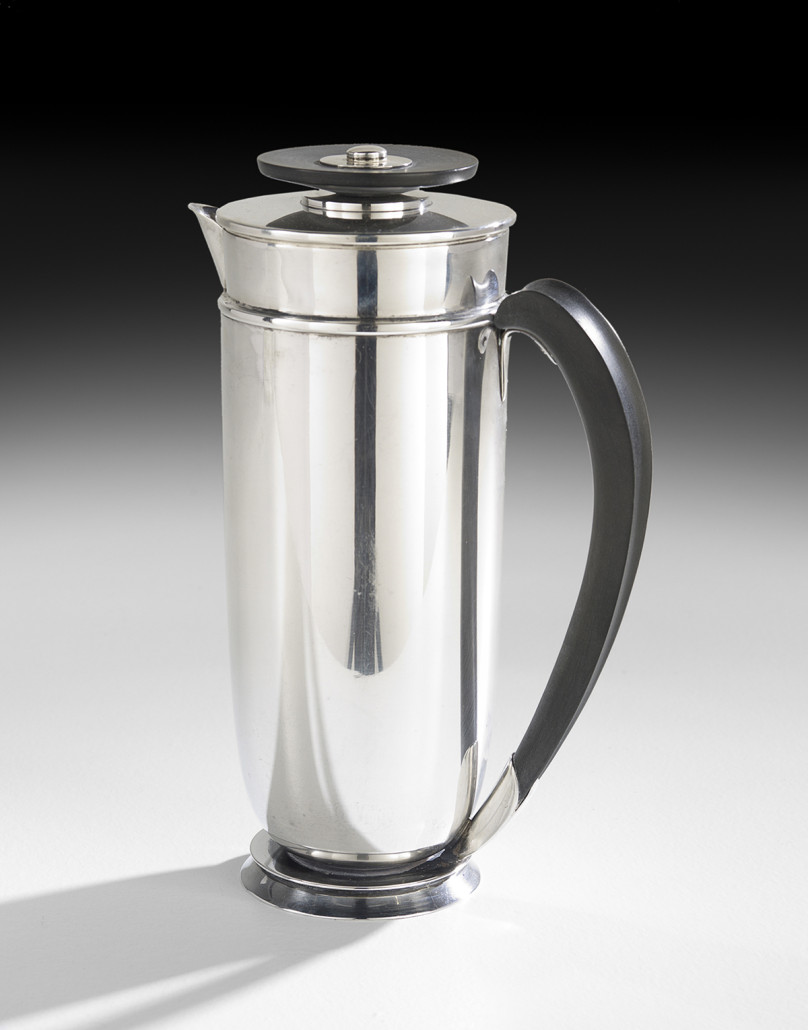 2 – JULEP CUPS
Special cups and beakers are the preferred serving vessel for certain distinctive drinks, such as the mint-infused bourbon julep. Top dollar is paid for julep cups from 19th century Southern silversmiths in Kentucky and Tennessee. 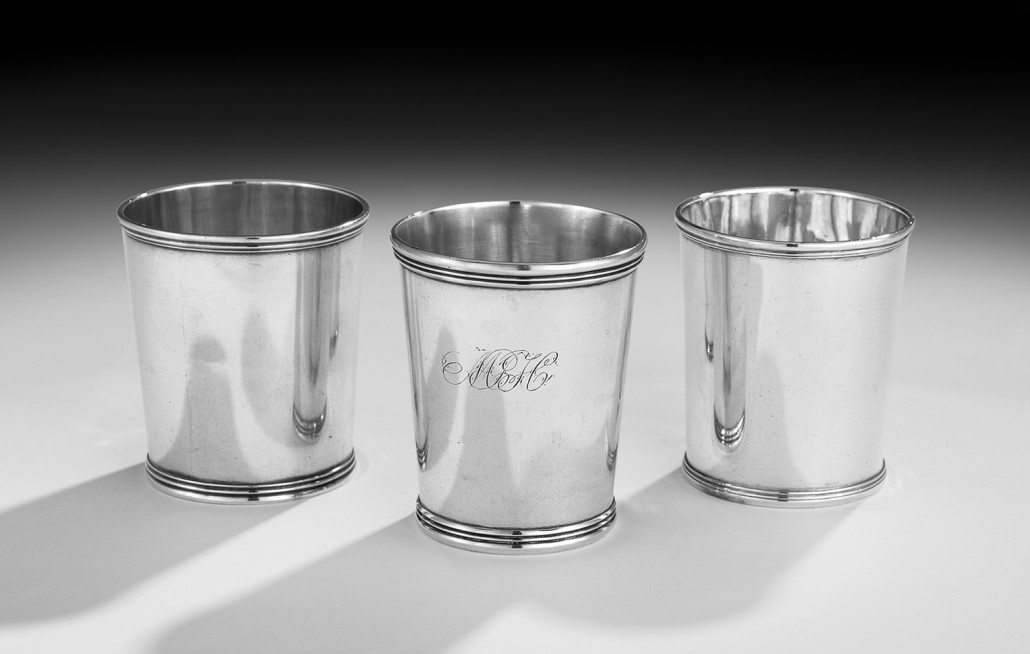 3 – PUNCH BOWLS AND MONTEITHS
The term “punch” was a Sanskrit import that arrived in England in the 17th century when serving fruit and liquor drinks became popular. But enjoying mass quantity alcoholic communal drinks dates back to medieval wassailing and beyond. Punch bowls can be silver masterworks that easily bring five-figure prices, as do monteiths, large notched bowls used for cooling and rinsing wine glasses.

4 – WINE LABELS AND COASTERS
Silver labels bearing legends such as “Brandy” or “Madeira” are an affordable and decorative starting point for the wine antique collector. Silver coasters can be found in many attractive patterns and fulfill their classic role at dinners and parties. 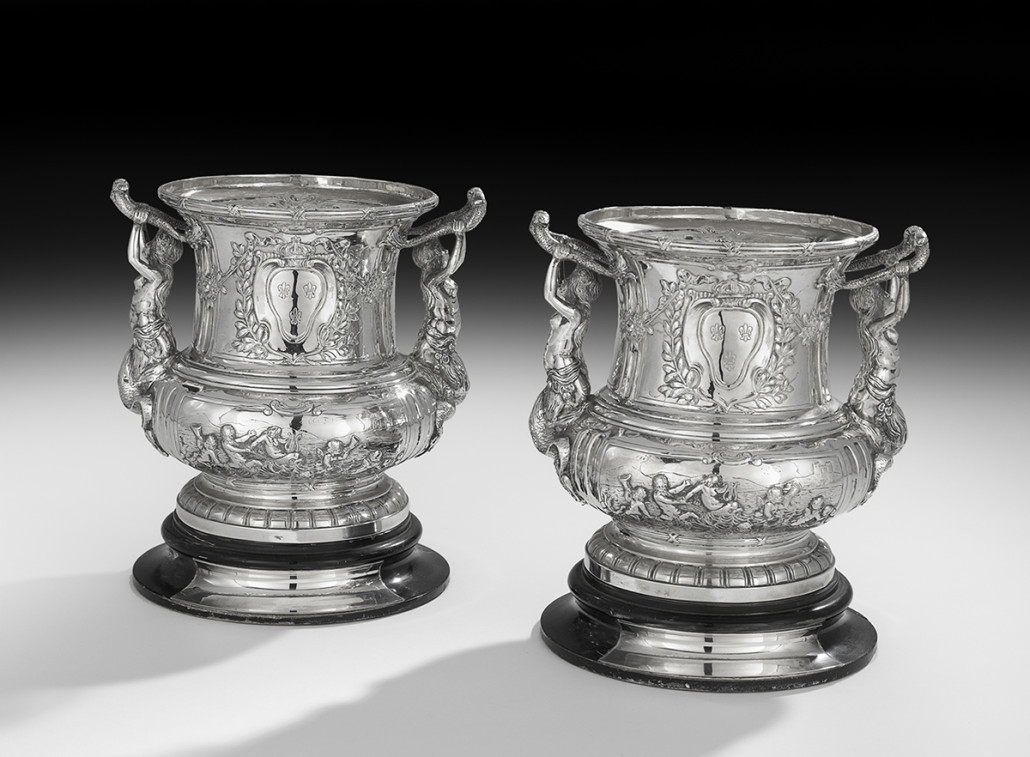 Neptune and his sea nymphs frolic on this pair of German silver wine coolers on stands, first quarter of the 20th century, which carry the Bourbon arms. The pair sold for $9,532 at NOAG in 2015. Courtesy New Orleans Auction Galleries

5 – COOLERS AND CHAMPAGNE BUCKETS
Cooling containers for wine bottles come in every style from sleek modern to Renaissance over-the-top. Auction lots frequently offer pairs or larger sets. Choose examples that match the mood and set out your best bottles with flair. 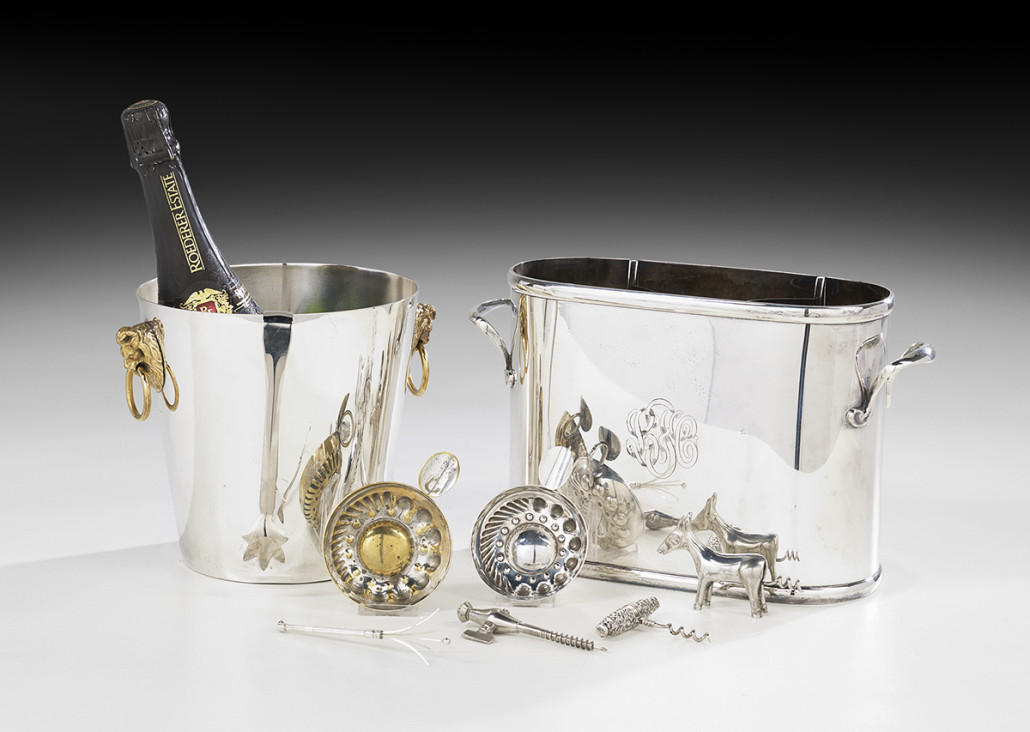 7 – DECANTERS
Decanters and claret jugs are typically crystal, often clasped with silver handles or frames, perfect for a formal sideboard. They come singly and in sets and make an attractive presentation for sherry, red wines or brandy.

Although the above are among the best-known collectibles connected with wine and spirits, there are other byways to explore such as wine cask labels, wine funnels, and the silver spoons used in the ritual of absinthe drinking.