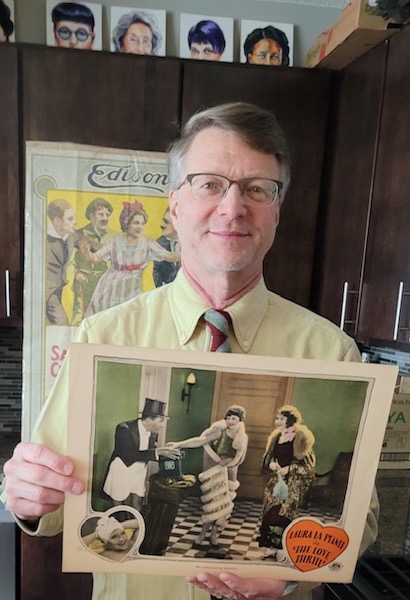 In this December 2022 photo, collector Dwight Cleveland holds a silent movie-era lobby card from his extensive collection. He has entered an agreement with Dartmouth College to digitize his lobby cards for preservation and publication. Image courtesy of Dwight Cleveland.

CONCORD, N.H. (AP) – Missing Millions is a 1922 silent film with a darkly prescient title – like the vast majority from that era, the movie all but vanished in the ensuing century, survived mostly by lobby cards. Scarcely bigger than letter paper, the cards promoted the cinematic romances, comedies and adventures of early Hollywood. More than 10,000 of the images that once hung in movie theater foyers are now being digitized for preservation and publication, thanks to an agreement between Chicago-based collector Dwight Cleveland and Dartmouth College that all started when he ran into a film professor at an academic conference in New York.

“Ninety percent of all silent films have been lost because they were made on nitrate film, which is flammable and explodable,” Cleveland told the Associated Press. “What that means is that these lobby cards are the only tangible example that these films even existed.”

The cards, traditionally 11 by 14in and arranged in sets of eight or more, displayed a film’s title, production company, cast and scenes that could convey a sense of the plot. Movie screen trailers didn’t become a common practice until the rise of the movie studio system era in the 1920s, said Mark Williams, associate professor of film and media studies at Dartmouth and the project’s director. 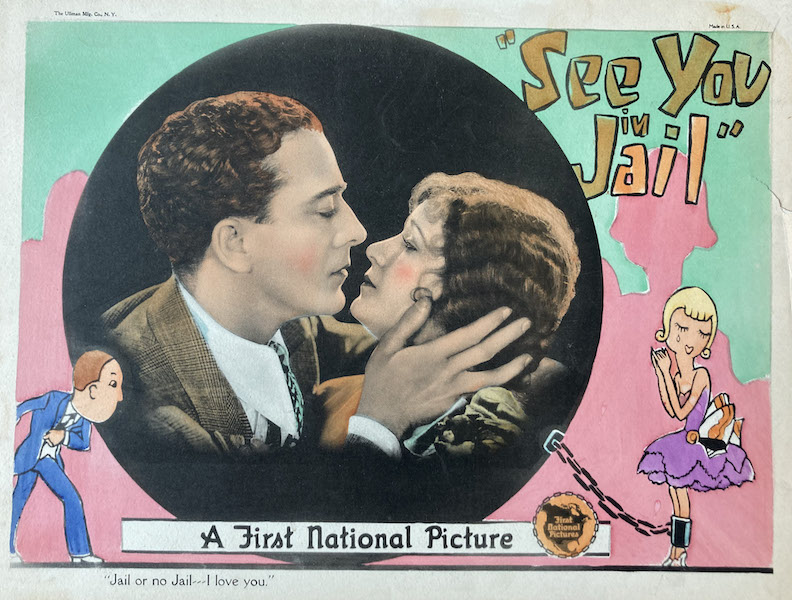 Lobby card for the 1927 silent film comedy ‘See You in Jail,’ starring Jack Mulhall and Alice Day. It is one of more than 10,000 silent movie-era lobby cards in Dwight Cleveland’s collection that is being digitized through a project at Dartmouth College. Courtesy of the Dwight M. Cleveland collection

Often displayed on an easel or framed and meant to be seen up close, the lobby cards promoted current films that were playing as well as coming attractions.

Today, the cards, many of them more than 100 years old, play an even bigger role, reflecting the stars, styles and storytelling of a bygone era. The legacy of the Paramount Pictures-released Missing Millions, for example, rests in an image of actress Alice Brady and her accomplice, who plot to steal the gold of the financier who sent her father to prison. Brady made the transition to talkies, but that film and a number of others she made during the silent era are lost.

Cleveland, a real estate developer and historic preservationist, became interested in the cards as a high school student in the 1970s. His art teacher had collected some, including one of Lupe Velez and Gary Cooper from the 1929 Western romance Wolf Song.

“I just fell in love with the color and the deco graphics, and this romantic embrace, and everything about it, which just was incredibly appealing,” he said, “and it just sort of screamed out ‘Take me home!'”

The early lobby cards were produced using a process that yielded black-and-white, sepia, or brown-toned images, with color added to some by hand or stencil, according to a post by Josie Walters-Johnston, reference librarian in the Moving Image Research Center at the Library of Congress. 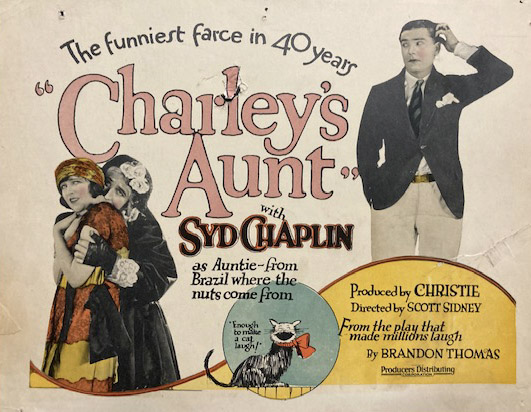 Lobby card for the 1925 silent comedy film ‘Charley’s Aunt,’ which starred Syd Chaplin, the older half-brother of Charlie Chaplin. It and more than 10,000 silent movie-era lobby cards in Dwight Cleveland’s collection are being digitized thanks to a project conducted at Dartmouth College. Courtesy of the Dwight M. Cleveland collection

By the 1920s, the images became more photograph-like and featured details such as decorative borders and tinting. They endured for decades, with production of lobby cards ending in the late 1970s or early 1980s, Walters-Johnston wrote. But in 2015, the practice was revived when Quentin Tarantino put out a special set for his Western The Hateful Eight.

Cleveland has been shipping boxes from his collection to Dartmouth’s Media Ecology Project, where a small group of students is charged with gingerly removing each card from its protective sleeve to scan and digitize. The students, assembled by Williams, are also creating metadata.

Williams said the project – which began in September and is expected to be finished later this fall – will provide insight into how the films were promoted and what kind of design features went into the marketing of a film from a given studio, among other information that would be difficult to find.

“We’ll be able to restore access to a really fundamental visual culture related to these different performers and studios, and genres,” he said.

Williams said that the project is invested in both cultivating new scholarship, and an awareness about how endangered media history is.

“People, they link up to YouTube, and they think that media history is inexhaustible and eternal. And both of those statements are false,” Williams said.

When the movies now considered lost or surviving incomplete were produced, the art form’s shelf life was short, Williams said. Only as time passed did people start to appreciate film as a significant art and a force in popular culture worthy of preservation.

The lobby cards validate the existence of a range of movies – from major studios that are still releasing films today and smaller ones that only endured for a handful of years – and memorialize what Williams described as “a great number of stars – many of whom have been forgotten.” 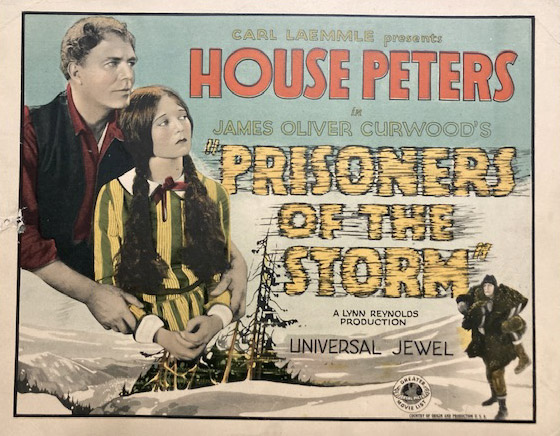 Lobby card for ‘Prisoners of the Storm,’ a 1926 silent Western starring House Peters and Peggy Montgomery. This card and thousands more from Dwight Cleveland’s collection are being digitized at Dartmouth College and will become part of its Early Cinema Compendium. Courtesy Dwight M. Cleveland collection

“There’s so much media that is in danger of disintegrating, just literally turning to dust,” he added, extolling the importance of the endangered “historical, vulnerable, ephemeral, extraordinary material.”

Cleveland also had donated 3,500 lobby cards of silent-era Westerns – featuring stars such as William S. Hart, Jack Hoxie and Buck Jones – to the National Cowboy & Western Heritage Museum in Oklahoma City. He arranged for their loan to Dartmouth for the project.

When completed, the lobby card collection will become part of Dartmouth’s Early Cinema Compendium, which will feature 15 collections of rare and valuable archival and scholarly resources. The compendium, which will be published online as part of a grant from the National Endowment for the Humanities, will also include more than 7,000 frame samples from early and mostly lost U.S. films, plus access to more than 2,500 archival films across the genres of early cinema.

The ultimate goal, Williams said, is “so that people who are fans or casual fans or true scholars will have access to this material and catapult new interest in it.”

Cleveland – certainly no casual fan – once owned an archive that had 45,000 movie posters from 56 countries. He wrote a book, Cinema on Paper: The Graphic Genius of Movie Posters, in 2019. In addition to the Dartmouth project, his lobby card collection formed the basis for an exhibit in New York focused on the women who were prolific filmmakers, writers and producers during the silent-film era. He’s planning a book on the subject.

With Williams applying computer science, “it just takes it into a whole other realm in the future with metaverse and everything else,” Cleveland said. “I feel like I’ve been sort of stuck in nostalgia, if you will, and now I feel like I’m being propelled into the future with him and that’s a very exciting prospect.” 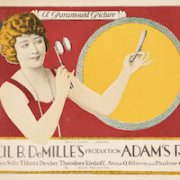