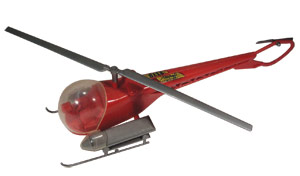 The popular 1950s Swadar Bell 47 with litters was one of several versions made. G.R. Webster Collection.

The helicopter is an amazing machine. Pilots who fly them describe it as trying to control 20,000 spare parts flying in loose formation at more or less the same altitude, in roughly the same direction, at approximately the same time.

A helicopter derives its ability to fly lift by rapidly rotating the rotor blades while compensating for the torque from the engine with either a small set of vertically mounted rotor blades at the rear of the fuselage and or an additional set of main blades turning in the opposite direction. Another largely unsuccessful early design used rotor tip jets to power the blades avoiding the torque forces.

An autogiro appears at first glance to be similar to a helicopter, but it uses a free spinning rotor to develop lift and is not capable of making vertical takeoffs or powered landings. It is pushed through the air with an engine-powered propeller. Both machines can land safely without power, using autorotation to control descent.

An aspiring helicopter pilot needs learn to use both feet, both hands and one wrist at the same time and generally will require twice the hours of early training a fixed wing pilot would need to be able to fly one successfully. Once learned, it is no more difficult than any other type of aircraft.

Leonardo da Vinci, the noted 15th-century artist and inventor, is generally credited with the first design of a craft resembling today’s helicopter. He called it the aerial screw but never produced a working model. The first mass-produced helicopter was made by Igor Sikorsky, based on a 1942 design that used the basic single main rotor and tail rotor system. This remains the predominant configuration in use today. Newer developments such as tilt rotor aircraft are now entering service and are capable of high-speed flight over long distances while maintaining the ability to hover, rise and descend vertically. 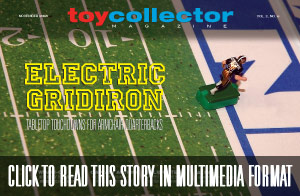 The first toy helicopters produced focused on the American Sikorsky H-5/S-51 that was also manufactured under license in Britain for civilian use as the Westland Dragonfly. Early toy examples of this helicopter were produced in the United States, Great Britain and Germany, in lithographed tin, pressed steel and plastic.

The helicopter gained its greatest fame, however, during the Korean War when the H-5/S-51 was first used to rescue United Nations’ pilots shot down behind enemy lines. It soon became apparent that the helicopter could serve to rapidly evacuate critically wounded personnel from frontline areas. Two litters could be attached to the outside of the airframe to serve in this role. The introduction of the Bell 47, designated the H-13 Sioux by the U.S. Army and known to many from the TV-series M.A.S.H, combined with the Sikorsky S-55 H-19 Chickasaw, known as the Westland Whirlwind in Great Britain, greatly improved upon the battlefield medical evacuation capabilities of the helicopter. Overall, their use contributed to reducing the mortality rate of the wounded to 2.4 percent. The Bell H-13 alone is credited with evacuating some 18,000 United Nations casualties during the war.

The Sikorsky H-19/S-55 was a designed as a multiple passenger and cargo carrying helicopter and introduced the concept of rapid aerial transport of troops and supplies into the battlefield during the final months of the war.

Some Japanese toy firms such as MT and TN seemed to specialize in producing lithographed tin helicopters in both civilian and military versions as the Korean War ended. They are not considered rare and excellent examples at reasonable prices can be found today.

Probably the main reason they are still available is that the ungainly helicopter toys just didn’t offer the simple playability of a fixed-wing toy. The rotors were fragile, easily bent or broken, and often lost. The Japanese makers tried to compensate for this by complexity such as adding visible engines, battery-powered remote controlled operations, lights and other gimmicks. Collectors of lithographed tin toys generally avoided them until recently.

Arnold of Germany approached the playability problem in a new and inventive fashion by allowing a toy helicopter to actually fly. Using a lightweight lithographed, stamped aluminum fuselage and thin composite blades, Arnold helicopters provided plenty of action. Arnold produced several versions and sizes of the H-19 S-55 along with a Fairey Rotodyne jet-tipped compound helicopter aircraft with wings, and a twin-rotor design based on the Bristol 173.

Arnold also made a Flying Platform toy based on an experimental craft operated by a lone soldier. These toys used a hand crank with a drive cable attached to the toy to power the rotor blades.

Marx Toy Co. developed the Marx-A-Copter S-55 Workhorse, which is much sought after today for its realistic play action. The set included a battery-powered, plastic H-19 having the capability to pick up downed toy pilots, drop bombs on a submarine, carry troops and evacuate of wounded soldiers. Also contained in the set were a lakeside landscape scene, a control tower, a 33 r.p.m. record with actual helicopter sounds, and a booklet on the history of the helicopter. It is considered hard to find today complete and in working condition.

In the latter part of the 1950s Dux produced a flying helicopter that was made entirely of plastic and lifted off from a hand-held winding mechanism. As the rotor speed increased by pulling on a string, the weighted blades extended and rotated in pitch to lift the toy from its support. As the rotor slowed down after a short flight the blades retracted and went into negative pitch, allowing a realistic autorotation to a safe, normally crash-free landing.

Also in the 1950s, the American firm Swadar produced a Bell 47 H-13 in several versions, one with litters, another with pontoon floats and a third with simple skid landing gear. Examples are frequently offered in the marketplace.

As die-cast toys grew in popularity in the mid 1950s more accurate and realistic helicopter toys entered the market place. Wiking of Germany produced an accurate plastic toy of the Westland S-51. Later TootsieToy added small die-cast toys of a Sikorsky H-34 and a Hiller H-23 in their boxed sets. Both of these toys are considered by TootsieToy collectors to be among the hardest to find of all their postwar toys. Other companies making diecast helicopters were the Italian Mercury, French Solido and both the French and British Dinky Toy. Later on, Corgi made an entire line of various die-cast helicopters based on those in the popular James Bond films as well as those used in the Vietnam War. Even Britains added three plastic versions of the Hughes 300. These toys became popular additions to their lines, but all are hard to find today in complete condition.

During the Vietnam War the Huey helicopter became known as the Jeep of the skies, rapidly transporting troops into combat, equipment and evacuating the wounded. Many variants of the Bell UH-I Huey, twin rotor helicopters resembling the Boeing CH-46 and Ch-47, the Sikorsky S-64 Sky Crane, the HH-3 Green Giant and the S-61 Sea King were produced.

The role of helicopters has been widely expanded to include various military roles and for use in personal transportation, construction, firefighting, agricultural application, search and rescue, aerial ambulance, power line repairs and police work. Today, toy versions of these craft are being produced by manufacturers all over the world.

WHAM-O: From Slingshots to Superballs