Butterfly McQueen in an autographed ‘Gone With the Wind’ movie still. Image courtesy of LiveAuctioneers Archive and Signature House.

AUGUSTA, Ga. (AP) – In the distinctive, high-pitched voice that made her famous, actress Thelma “Butterfly” McQueen’s words live on through a cassette tape as she recalls vivid memories of her childhood in Augusta and how she landed the role of Prissy in the classic film Gone With the Wind.

On Dec. 12, 1989, McQueen shared details of her life with Gary Swint, who recently retired as director of the Augusta-Richmond County Public Library. When McQueen learned that the library had an oral history project years before, she suggested Swint interview her, he said.

The interview is one of many with local politicians, historians and prominent citizens that the public library, Augusta State University’s Reese Library, the Medical College of Georgia and The Lucy Craft Laney Museum of Black History are seeking grant funding to convert to digital recordings.

“I’m so terrified of playing one of these and somehow shredding it,” said Dottie Demarest, a genealogy and local history librarian at the public library. “I want to keep them in as good a shape as possible until the information can be transferred, and then everybody can enjoy it.”

The tape with McQueen’s interview isn’t available to the public, but fans of the late actress can read a transcript of the interview in the library’s reference department.

Here are some excerpts from the interview.

BORN IN TAMPA, FLA., on Jan. 8, 1911, McQueen said that she couldn’t recall how old she was when she moved to Augusta.

“I do know that my mother sent me up to live with my city uncle and aunt, and then when they separated, they put me in the Catholic convent there at Gwinnett and 12th, the Brown Sisters they called it then,” McQueen said.

When her mother came up from Florida, she took McQueen out of the convent and took her to live with her “country aunt and uncle” in Turpin Hill.

She attended school for a while on Mauge Street, saying “it was kind of rough there,” so her aunt and uncle took her to Walker Baptist Institute on Mill Street.

“They always gave me the lead at closing time,” she said. “I remember I was Queen Tatanya, and I had a contingent of fairies behind me. I remember singing. Oh, the music was so pretty at Walker Baptist. We sang and we marched around the chapel. I had a very happy childhood.”

Later on, when she discovered the harsh realities of life, McQueen asked her mother why she sheltered her.

“I sometimes think my mama shouldn’t … have hidden so much of the unpleasantness of life,” she said. “When I looked back and I asked her, ‘Why didn’t you and the nuns and the priests tell us these things in life?’ She said, ‘You don’t tell children these things.’”

As a child, McQueen attended Harmony Baptist Church. In the transcript, she acknowledged that she had become an atheist.

McQueen recalled walking from her uncle’s house to ride the streetcar.

“And I noticed that we always sat in the back of the streetcar. They didn’t tell me I was segregated,” McQueen said.

Because she didn’t know any better, she “didn’t care because the back of the streetcar went the same way as the front” and they always arrived where they were going, she said.

In 1924, McQueen’s mother sent for her to live with her in New York, where she had moved to find work. The New York school system was rigorous, and she said she was held back when people learned she was from Georgia.

“Once you say you’re from Georgia, they put you back many grades. And she moved to Long Island, and they put me back again. And my mother begged them, ‘Give her a test.’ So they gave me a test and they put me up three classes,” she said.

Her mother stayed in Long Island, N.Y., for eight years because she didn’t want to risk having McQueen set back in school again.

McQueen was a member of a drama club. She got experience doing small parts, and when Broadway producer George Abbott was casting Home Sweet Harlem, later renamed Brown Sugar, she landed a role.

The positive press she received from her Broadway performance helped her secure the role of Prissy in Gone With the Wind.

Two years before, she had begged for the role, she said.

“The girl who named me Butterfly … she came to work one day and she said, ‘I’ve just read a book called Gone With the Wind. And in today’s news they said they’re going to make a movie. You go down to Selznick’s Park Avenue office and tell them you are Prissy.’ And when I went down they asked me my age, I told them the truth. They said, ‘Oh, you’re too old, you’re too fat, you’re too dignified. You could never be Prissy,’ ” McQueen said.

Because of her Broadway success, however, agents pulled some strings and she was on her way to Hollywood. She lived there for eight years before returning to New York, she said.

Though she considered Gone With the Wind the highlight of her acting career, working on the film was difficult, McQueen said.

“I don’t think I can make anything better than Gone With the Wind,” she said. “When people ask me, ‘What’s the best movie?’ I have to say Gone with the Wind. I didn’t appreciate it when I first worked on it, because it was 1939 and I thought we would bring up to date the accomplishments of the black race. I didn’t think I’d have to go back and be a slave. But now I’m very happy, because I make a living off of it. It was history.”

She admitted that she was “terribly unhappy, having to go back to being a slave.”

“But I did the best I could, but I didn’t let them slap me, and I wouldn’t eat the watermelon. Those are the only two things I wouldn’t do. But everything else I did as well as I could,” she said.

McQueen said that she went on to appear in 28 films and win an Emmy for a children’s TV special. A few months before the interview, McQueen had completed the television movie Polly, starring Keshia Knight Pulliam and Phylicia Rashad.

MCQUEEN WAS PETITE and “always dressed to the nines,” Swint said.

“She was always very, very well-dressed. I don’t mean flashy or expensive, but she was very particular. She was very neat,” Swint said.

In the 1980s, McQueen owned property in New York and had a house in Augusta. She came to Augusta in the winter and returned to New York during the summer, she said.

McQueen sent Swint postcards to let him know when she would be coming to Augusta. They became friends over the years.

“She always called me Mr. Swint, so I always tried never to call her Butterfly. I don’t think she ever called me by my first name. It was interesting talking with her about things. She liked the library very much. She was a very literate person, and reading and the libraries meant a lot to her,” Swint said.

Some of her most painful memories also involved the library.

“The most interesting point was that when she was growing up, she wanted to go to the main library here in Augusta,” Swint said. “They told her that she couldn’t come into that library, that she had to go to the library for colored children, which was the Wallace Branch. That was a very emotional moment for her, and she started crying and said at the time, she just couldn’t understand.”

Eldora Baker, a former librarian, said that she chatted with McQueen during her visits.

“She always impressed me. She was a very nice person,” Baker said.

Alice Walker, of Aiken, a former reference librarian, recalls that McQueen came in during summers in the early 1980s for the library’s movies at noon.

“She was really a character. If anybody asked for her autograph, she had Xeroxed them. She had a whole bunch of them on a piece of paper, and she cut them out with pinking shears and she’d just hand you one of those,” Walker said. “She was really a hoot. Everybody enjoyed talking to her. She knew she was a celebrity.”

McQueen had a tragic death. On Dec. 22, 1995, she died at Augusta Regional Burn Center from injuries she suffered from a fire at her home on Dent Street. She was 84 years old.

McQueen had second- and third-degree burns over 70 percent of her body in the fire. According to The Augusta Chronicle‘s archives, she told a neighbor that her clothing caught fire when she tried to light a kerosene heater.

James Pride was a Boy Scout who helped to rescue McQueen.

“There was a group of Boy Scouts, and we were working with the food bank to deliver food right before Christmas. We stopped because of the fire,” Pride said.

They noticed her in her carport.

“She was there crying out for help. The assistant leader (Matt Wilby) told her to lay on the rug, and we all took sides of the rug and we pulled her on the rug out of the flames because the flames were engulfing the carport, too,” Pride said.

“I asked Mr. Wilby if it was OK for me to hold her hand, and he said no because we didn’t know what kind of burns she had,” Pride said. “She was very burned, but she was saying thank you the whole time. That’s all she said. She might have said it close to 50 times. I was there basically telling her, ‘Jesus loves you.’ And I kept saying that. We didn’t know who she was. We had no idea this was somebody of notoriety.”

Pride has written about the experience, but he has still never seen Gone With the Wind.

“I feel like I’ve had a connection with her since then. I just feel like she might be praying for me or something, looking out for me. I think of her sometimes,” he said. 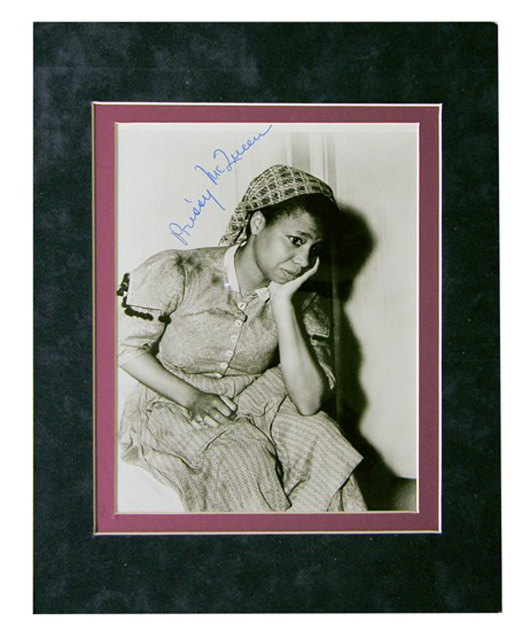 Butterfly McQueen in an autographed ‘Gone With the Wind’ movie still. Image courtesy of LiveAuctioneers Archive and Signature House.