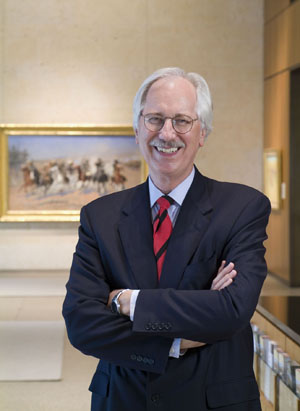 FORT WORTH, Texas—The Amon Carter Museum of American Art Board of Trustees announced yesterday the retirement of Dr. Ron Tyler as director of the museum. Tyler will serve as director until April 1, 2011; the board and museum management are currently working on a succession plan.

“During Ron’s tenure, we have seen our collection grow through valuable acquisitions of American art,” said Ruth Carter Stevenson, president of the board. “Our educational programs and online offerings have also exponentially expanded, and we have undergone extensive renovation and updating of the physical facilities. As we move into our 50th anniversary, the museum is positioned as a leader among art museums. Dr. Tyler has left a tangible legacy, and we are grateful for his leadership and vision.”

In retirement, Tyler plans to resume scholarly work, devoting more time to his lifelong passion for research and writing. He will work to complete three books, which are projects he began before he accepted the directorship in 2006.

“The nearly 22 years that I have spent at the Amon Carter are among the happiest and most productive of my career,” Tyler said. “I thank the Board of Trustees for the opportunity to work here, for it changed my life and essentially launched my career. I feel that I received my education here as much as at the universities I attended.”

In his first tenure at the museum, Tyler served as curator and assistant director for collections and programs. In 1986 he left to join the faculty of the University of Texas at Austin, where he served as professor of history for 20 years.

Tyler received his Ph.D. from Texas Christian University. He was director of the Texas State Historical Association from 1986 to 2005 and has served on numerous boards, including the Conference of Southwest Foundations, Eastern National and the Summerlee Foundation. He sat on both the planning and accessions committees for the Blanton Art Museum in Austin and is an elected member of the American Antiquarian Society, the Philosophical Society of Texas and the Texas Institute of Letters. Tyler is editor and author of more than two dozen books, including Alfred Jacob Miller: Artist as Explorer; Nature’s Classics: John James Audubon’s Birds and Animals; Visions of America: Pioneer Artists in a New Land; Posada’s Mexico; and The Image of America in Caricature and Cartoon. He is the recipient of numerous grants; has delivered many articles for publication in scholarly journals across the country; organized a number of major exhibitions; and lectured widely on exploration art, American and Western art and history, and John James Audubon. Among the awards Tyler has received in his career are: Doctor of Humane Letters from Austin College; Captain Alonzo de León Award for Contribution to Mexican History; Coral H. Tullis Award from the Texas State Historical Association for the best book on Texas history for The Big Bend: A History of the Last Texas Frontier; and Best Contribution to Knowledge from the Texas Institute of Letters and Outstanding Publication of the Year from the American Historical Print Collectors Society for Prints of the West.

“The Amon Carter is an incredible community resource,” Tyler said. “It has been a privilege to work here, and I expect to continue to use its collections for research on several book projects that I am developing.”

Fine musical instruments tuning up for Oct. 10 auction at Skinner
Scroll to top