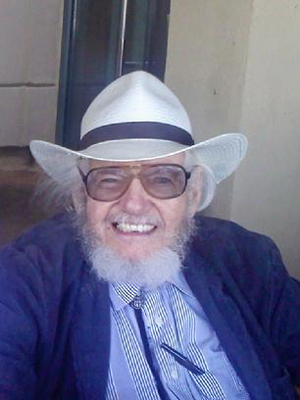 VIRGINIA BEACH, Va. (AP) – Everyone knows the Grinch, and most of us know Tom and Jerry, but very few know the animation artist who helped make the cartoon characters real on our TV screens.

Tom Ray was his name. He died last year, in Virginia Beach, at the age of 90. A collection of his pencil sketches, paintings and personal belongings is for sale at Tomstone Animation Art Gallery and Studios in the Yorktown Commerce Center in Virginia Beach.

“These are what’s left of Tom Ray’s cufflinks,” Brenda Ray said, pointing at a display case. “And this is a flask he got for his 90th birthday.”

Bringing out a stack of pencil drawings, she said: “He was just an amazing person.”

Ray began his animation career at Warner Bros. in 1937. In the years following, he worked at many leading studios. While in the Chuck Jones unit of Warner Bros., he co-directed Bugs Bunny and Road Runner cartoons.

He also worked on Tiny Toon Adventures, Animaniacs, and the TV versions of Men in Black, Transformers and 101 Dalmatians. Perhaps his best-known work was on the 1966 classic How the Grinch Stole Christmas.

Ray was one of five or six (take your pick – different sources give different numbers) artists who animated the Dr. Seuss story of the Grinch and his little dog, Max. A painting of the Grinch hangs on the wall of the gallery, which sells not only Ray’s work but also art and collectibles from Disney and Warner Bros.

A 1944 model sheet showing different expressions for Donald Duck goes for $595. A drawing of infant Bambi is $600. A framed watercolor of Speedy Gonzales, one of Ray’s final paintings, made at age 89, is priced $1,359.

There are less expensive items as well. A small boy went happily home on a recent day with a small Superman poster ($10) and a noise-making Hercules sword shaped like a lightning bolt ($3).

Much of the gallery’s offerings are pictured online at www.tomstoneanimation.com.

Brenda Ray said she first met her future husband in California when she sold him a car. They moved east in his later years and for a time had a studio-gallery in Pennsylvania, where he gave lessons and sold his art.

Also for sale are Ray’s bolo ties, his trick ropes (Brenda Ray described him as a cowboy) and his bar setup, complete with saddle-shaped stools.

“I think he was such a great artist,” she said. “I would like for this to become a great animation art gallery.”

Information from: The Virginian-Pilot, 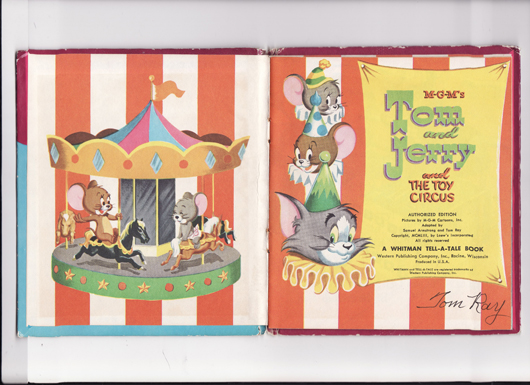 Tom Ray autographed the title page of this Tom & Jerry children’s book, which he helped produce for Whitman in 1953. Image courtesy of Tomstone Animation Art Gallery and Studios.

Rare postmortem daguerreotype of Chopin surfaces – but is it real?