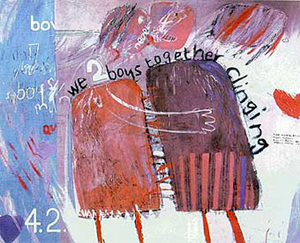 A work typical of David Hockney’s style is the 1961 oil on board titled ‘We Two Boys Together Clinging.’ Fair use of copyrighted low-resolution image used to demonstrate Hockney’s artistic genre.

LONDON (AFP) – British artist David Hockney has responded tohis appointment to the Order of Merit with typical humor, saying he was gladhis controversial campaign for smokers’ rights had not worked against him.

Hockney, who came to prominence during the British pop art movement in the 1960s, was named as a member of the exclusive order on Sunday by Queen Elizabeth II.

Accepting the royal honour is a turnaround for the 74-year-old who famously turned down a knighthood in 1990, has refused to paint the Queen and once said he sees no value in prizes.

Asked for a response to his appointment to the Order of Merit, Hockney told the Guardian newspaper: “No comment – other than it’s nice to know they are not prejudiced against the older smoker.”

Hockney is a pro-tobacco campaigner who has regularly spoken out in favor of smokers’ rights.

The Order of Merit has 24 members as well as additional foreign recipients, who are recognized for great achievement in the fields of the arts, learning, literature, science and other areas like public service.

The honor is a personal gift from the sovereign and is restricted to the living, meaning new inclusions can only be made following the death of an existing member.

Other members of the order include former British prime minister Margaret Thatcher and architect Norman Foster.

After bursting on to the art scene in the ’60s, Hockney extended his talents to work as a photographer, draftsman, printmaker and stage designer.

He spent many years in California and is probably best known for his paintings based on his adopted home.

In recent years he has returned to his home county of Yorkshire in northern England and embraced new technology, composing works on an iPad.

Some of the iPad works will feature in a new exhibition, “David Hockney: a Bigger Picture,” at London’s Royal Academy of Arts, which opens on January 21. 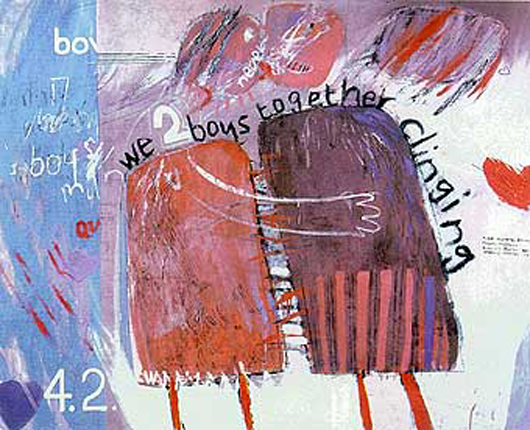 A work typical of David Hockney’s style is the 1961 oil on board titled ‘We Two Boys Together Clinging.’ Fair use of copyrighted low-resolution image used to demonstrate Hockney’s artistic genre.

Visitors to New Mexico museum call it ‘the little Smithsonian’